The percussive blast from a howitzer left me deafened and disoriented. I scrambled to regain my senses and what was left of my men, and pushed forward to re-fortify the hotly contested capture point that had been fought over for the better part of 30 minutes. With only a handful of riflemen and a single anti-tank gun, the odds were clearly not in my favor. I still had a minute or so before my Sherman took to the battlefield, but the game clock was winding down, making the next five minutes the most important of the entire match. As I positioned my troops, manning machine guns that were picked up from fallen comrades, laying razor wire to halt the advance of enemy troops, and hiding my anti-tank gun in the hedge grove just behind my forces, I’d hoped that I would draw my opponent’s colossal tank into the opening where it could be shelled by my bazooka-toting infantry and that hidden AT-battery. But in war, the battlefield is ever changing, and any counter-attack that is planned for always has the possibility of not going exactly as intended. That certainly was the case here.

As I saw my foe’s ground troops rush over the hill like a uncompromising riptide, I braced for what I knew would be my final stand. Forces exhausted, beaten, and bloody, we fought on; using every ability given to me, I played my cards the best I could. I had even managed to buy enough time for my Sherman to deploy and make it to the capture area. I saw the enemy’s tank on the horizon; I knew what I was going to do to take it out. But as I readied my army, I noticed my own tank explode in a bombastic display of the heart-dropping fireworks. And then I noticed a similar explosion coming from the building where I had garrisoned some of my paratroopers. Scrolling frantically to where I thought the shots were coming from, I noticed that somehow I had been flanked by two separate armor units, turning the enemy tank count from one, into three. As the German’s armor rolled in on me, I knew it was a lost cause. But all I had to do was hold the point just a little longer — another 2 minutes, and I’d win. But then an artillery strike was called down on my sad, broken forces and it obliterated them all. I had lost. 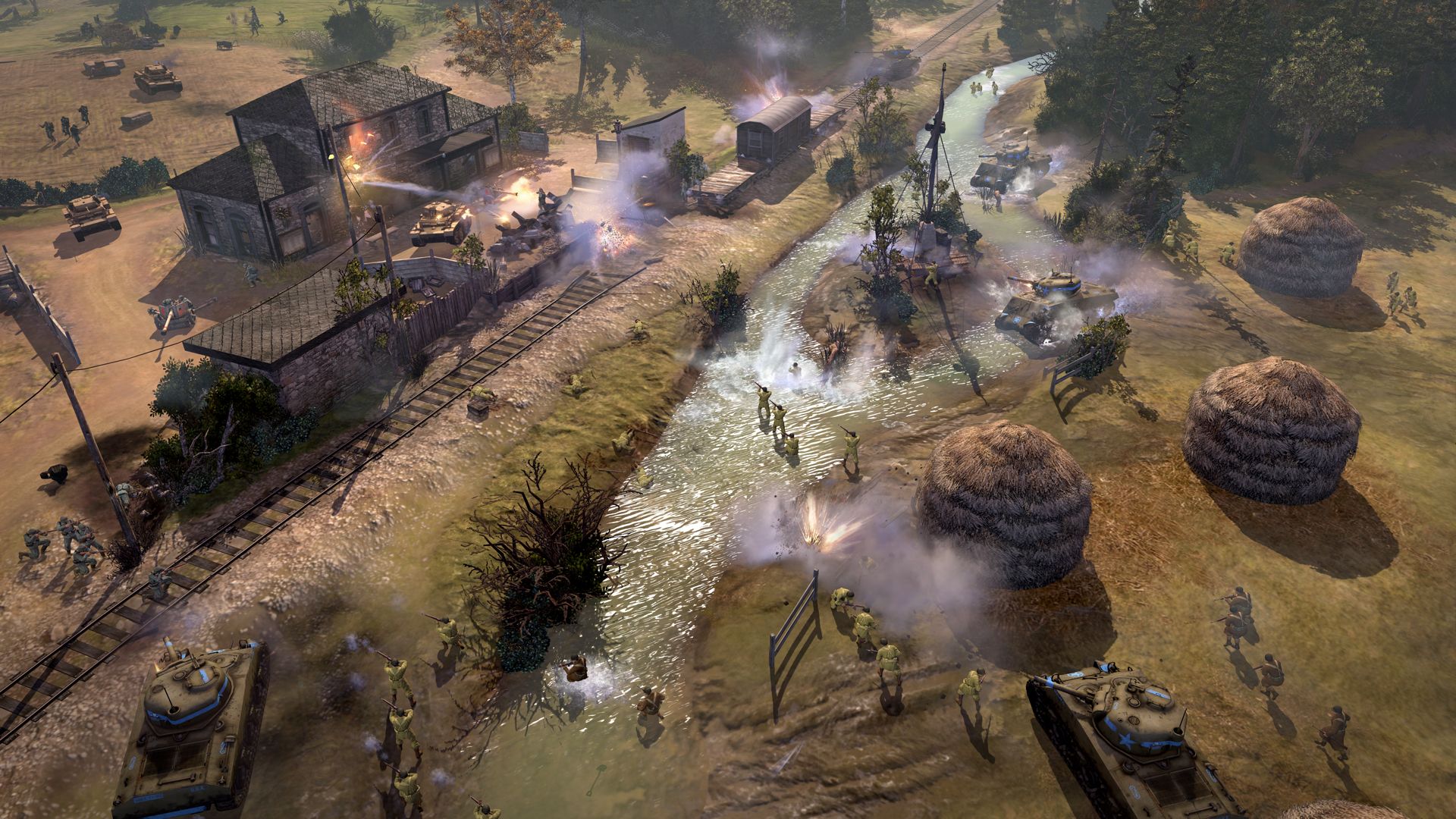 Company of Heroes 2: The Western Front Armies has piles of these moments just waiting to be experienced in its standalone multiplayer endeavor that focuses on the game’s two newest factions, the US and Germany’s Oberkommando West forces. Essentially, Relic has gone back to COH2’s multiplayer and taken a long, hard look at what worked and what didn’t. And while Company of Heroes 2 gave way to some wildly unbalanced and thereby almost completely broken MP, the Western Front Armies damn near wipes the slate clean and gives us a retooled, focused effort that emphasizes balance and new units as much as it does harrowing victories and crushing defeats.

It’s evident from our review of Company of Heroes 2 that we believed it to be a fantastic sequel to an already wonderful game. In fact, we felt it was the better of the two mainline games, what with its bevy of enhancements and new features. That being said, despite how compelling COH2‘s story was, the multiplayer left something to be desired if for nothing else than because of the omission of a playable US military faction. Enter The Western Front Armies, a standalone DLC that focuses on refining the multiplayer experience by completely forgoing a single player campaign. In this pseudo-expansion, we get two new factions and a host of improvements. Let’s take a look at what all is included in this package. 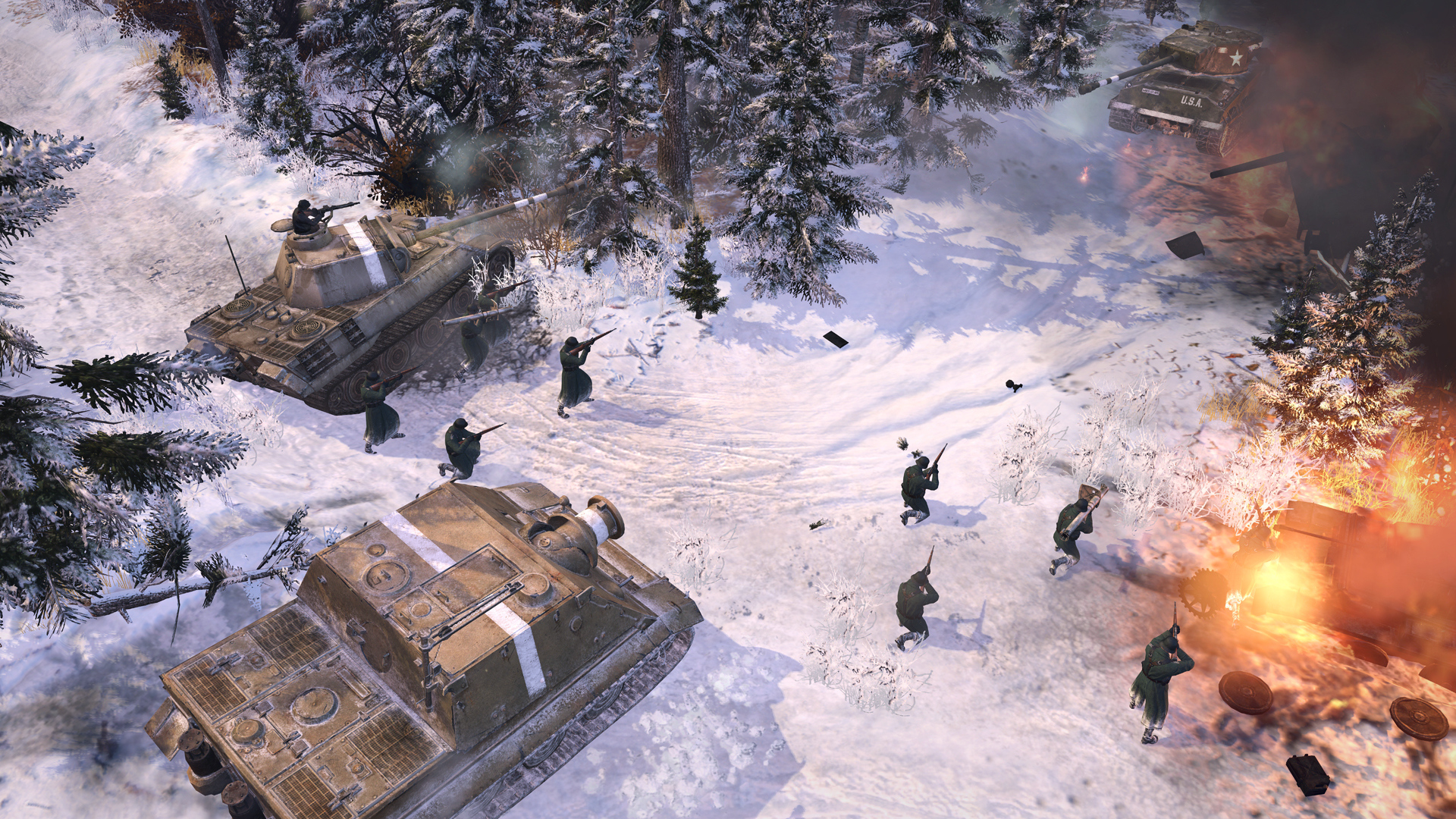 Breaking down the two new armies, we first have the US forces. Right when a match starts, players will notice what makes the Americans differ from the Oberkommandos; their base structures are pre-built. Meaning to say, the US faction is given everything they need to hit the ground running right from the get-go. While this might initially seem unfair, or even over-powered, how units are ultimately brought into play is where we see the scale tip back in the favor of balance. (More on that later.) Officers are one of the defining aspects of the American army. They are essentially what allow players to advance their tech trees — so without them, folks won’t be able to summon certain infantry units, artillery or armored vehicles to the battlefield. In this, playing the US is a delicate blend of offense and defense, as they can quickly grab points in the early goings, but can’t all-out blitzkrieg opponents with heavy-hitting units and vehicles all that quickly. This equates to a unique experience in the opening segments of any match between the US and Oberkommandos, since their styles of play are quite polarizing.

This is seen even more so in how the two armies focus their combat efforts. The American forces are extremely infantry-heavy; it seems to be what they’re built around. Throw together a few rifle squads, upgrade them with grenades, BARs and bazookas and they can give the enemy hell with quick, maneuverable tactics that feel almost guerrilla-like in nature. The sheer adaptability of the US feels especially dynamic, as their versatility can truly change the tide of combat with the deployment of a few key squads. Not to mention, they are a fast faction, and one that simply doesn’t excel all that well by hunkering down in a single spot. They, instead, seem to derive true strength by being on the move and constantly harassing enemy points whenever possible with hit-and-run sensibilities. 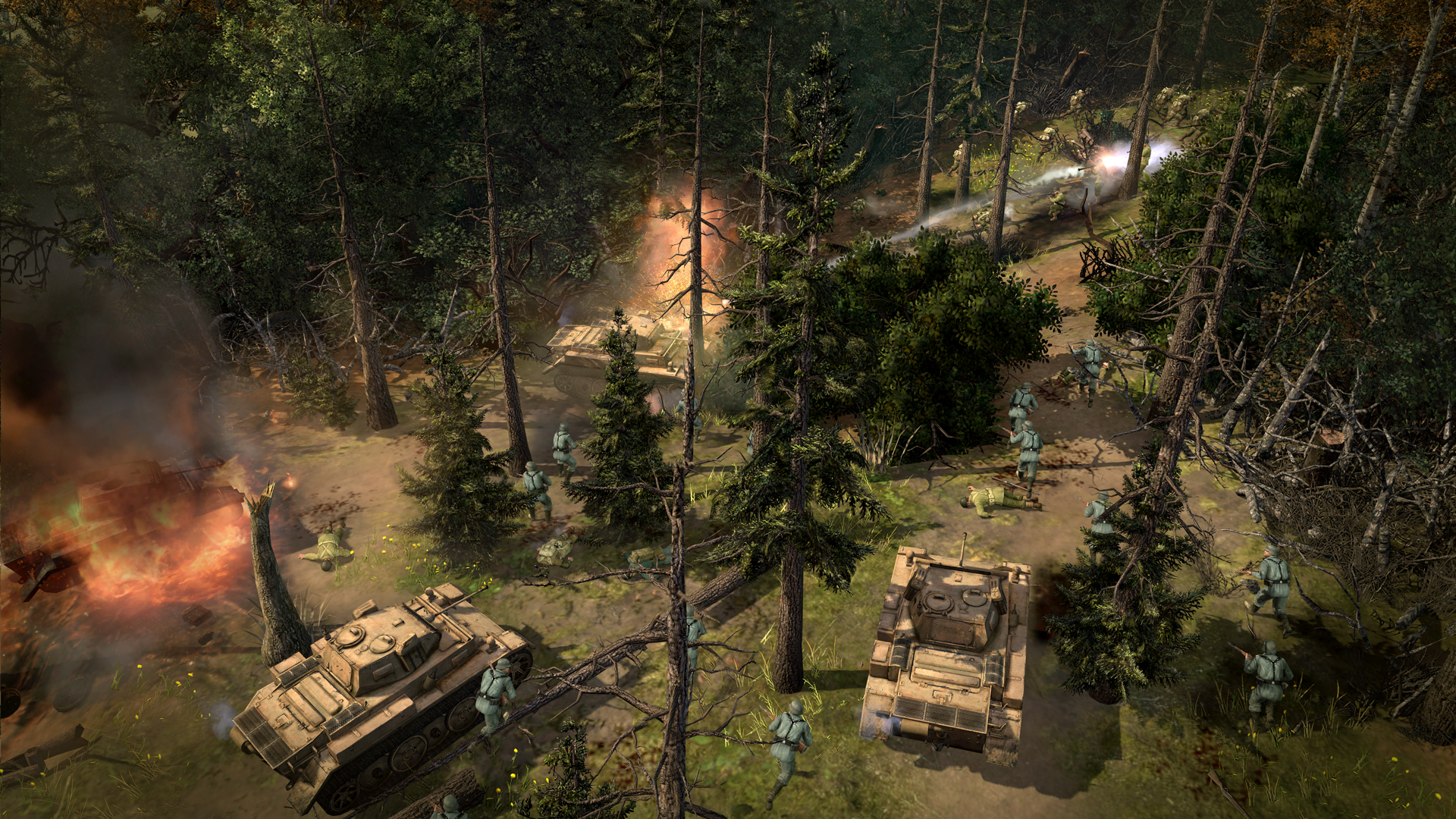 The German’s Oberkommandos, however, feel particularly armor-based. Because of this, they move slower and, as a result, the ideal strategy is one that is more cerebral and dare we say even plodding. It’s such a stark contrast when juxtaposed with the American forces, that playing as the West German Army here, after having just enjoyed a match with the US, feels almost befuddling. That being said, once players realize how to play to the ‘kommandos’ strengths, they will find a truly destructive force at their fingertips. In truth, those wanting to build a more infantry-centric army will not find it with the Oberkommandos; there are only three infantry unit types from which to choose, ultimately showcasing just how vehicle-specific the Germans are. On the whole, the West German Forces here don’t feel as varied as the US units do, which may be some kind of deterrent for those players who get into having a slew of options at their disposal. If we had to draw a comparison, we’d say the Americans are more of a jack-of-all-trades group, whereas the Oberkommandos are a master of something. Yes, the US forces can get into the proverbial vehicle game a bit, but not nearly to the extent as the Germans in Western Front.

Surprisingly, these two new factions fit right in with the armies already available to those who own the base Company of Heroes 2 game. The balance, then, is especially impressive with Western Front Armies, and even more so when we look at Relic’s misguided steps in this department with COH2. To be able to meld these two new armies into the mix without wildly or even subtly wrecking the systems already in place is a feat unto itself; thus, Relic should be commended on that accomplishment, and just their ability to really turn things around in the proverbial balance arena by and large since 2’s release just last year. 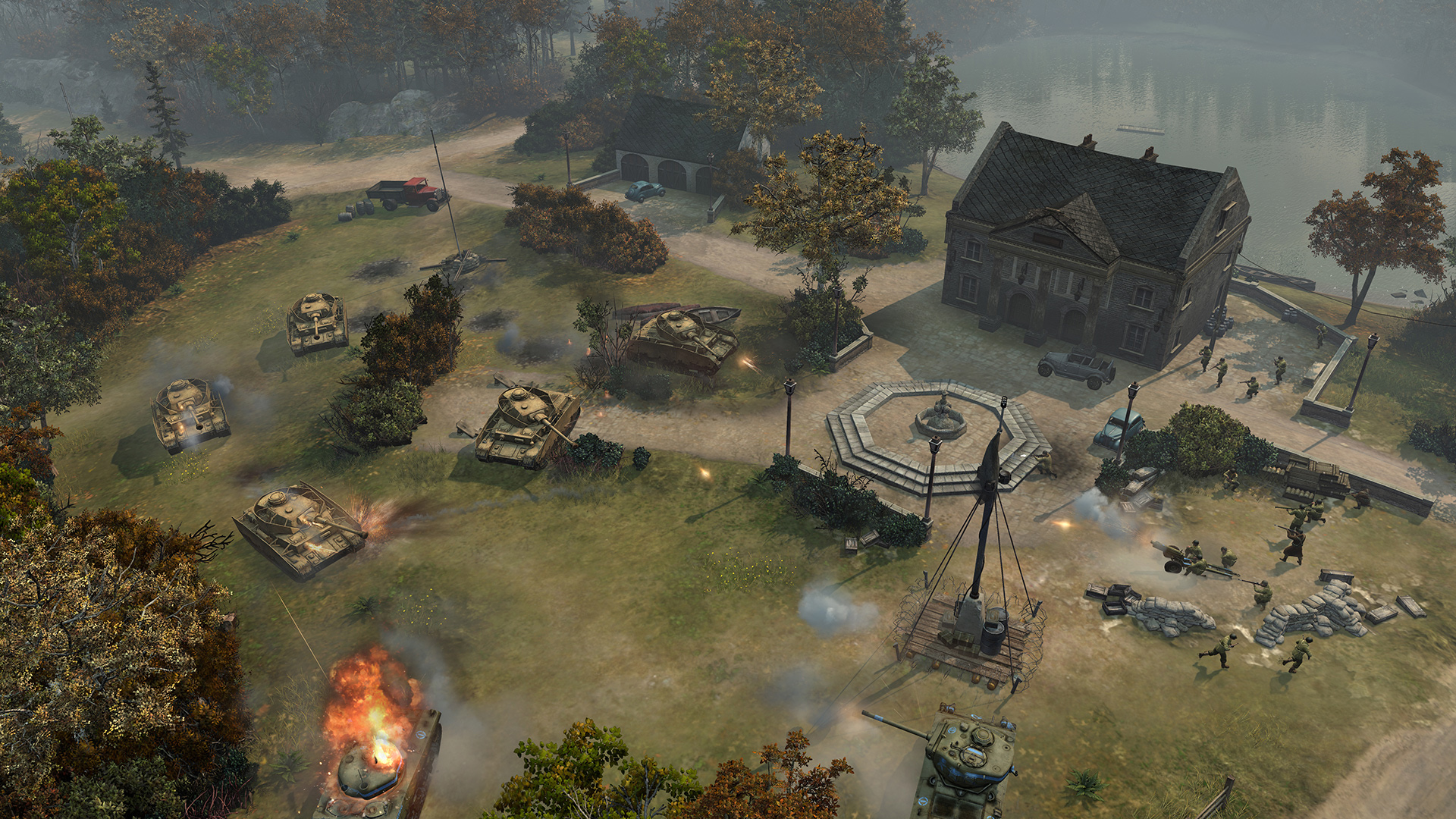 The two new armies are not the only new additions to Western Front; there are also a handful of new maps designed for two-, four-, six- and eight-players. In our time with each map, we noticed how satisfyingly crafted each one was, with involved tactical options thanks to well designed layouts. Moreover, these maps feel quite distinct from each other, seemingly to ensure a certain degree of diversity among tactics and scenery. This, factored in with the ability to use the new factions on any of the previous COH2 maps, makes for quite a bit of content.

Clearly, the only thing missing from Western Front Armies is a single player campaign. Whereas COH2‘s story was dark and gritty (though woefully historically inaccurate at times), Relic has opted for a straight multiplayer approach, recognizing that its the competitive and cooperative aspects of Company of Heroes that players enjoy so much. That being said, because the campaign of last year’s title was so strong, it’s unfortunate that some kind of single player offering isn’t available here at all. This decision, while catering mostly to the masses and an intended audience, is nevertheless alienating those who have really enjoyed playing these games as a solo affair. Sure, that type of thing is still an option here, barring any kind of narrative, as it’s entirely possible to play against strictly AI opponents in some 1v1 goodness, it still may make the $20 price tag feel a bit high.

That brings us to the final point; Western Front is being doled out in a few ways. There’s the standalone purchase that costs $20 and comes with both armies, and then there’s the option to buy the two factions separately for $13. Either purchase will allow folks to jump directly into the multiplayer and provide them access to all 31 maps from the base game. It will be up to each individual person on whether these prices seem fair, but a buy-in price of $20 to access what most folks play Company of Heroes for anyway seems like a steal to us. The only hangup would be for those players who already own COH2, as what’s in this package is fundamentally sound, but nothing spectacularly groundbreaking in terms of quality and quantity of content. 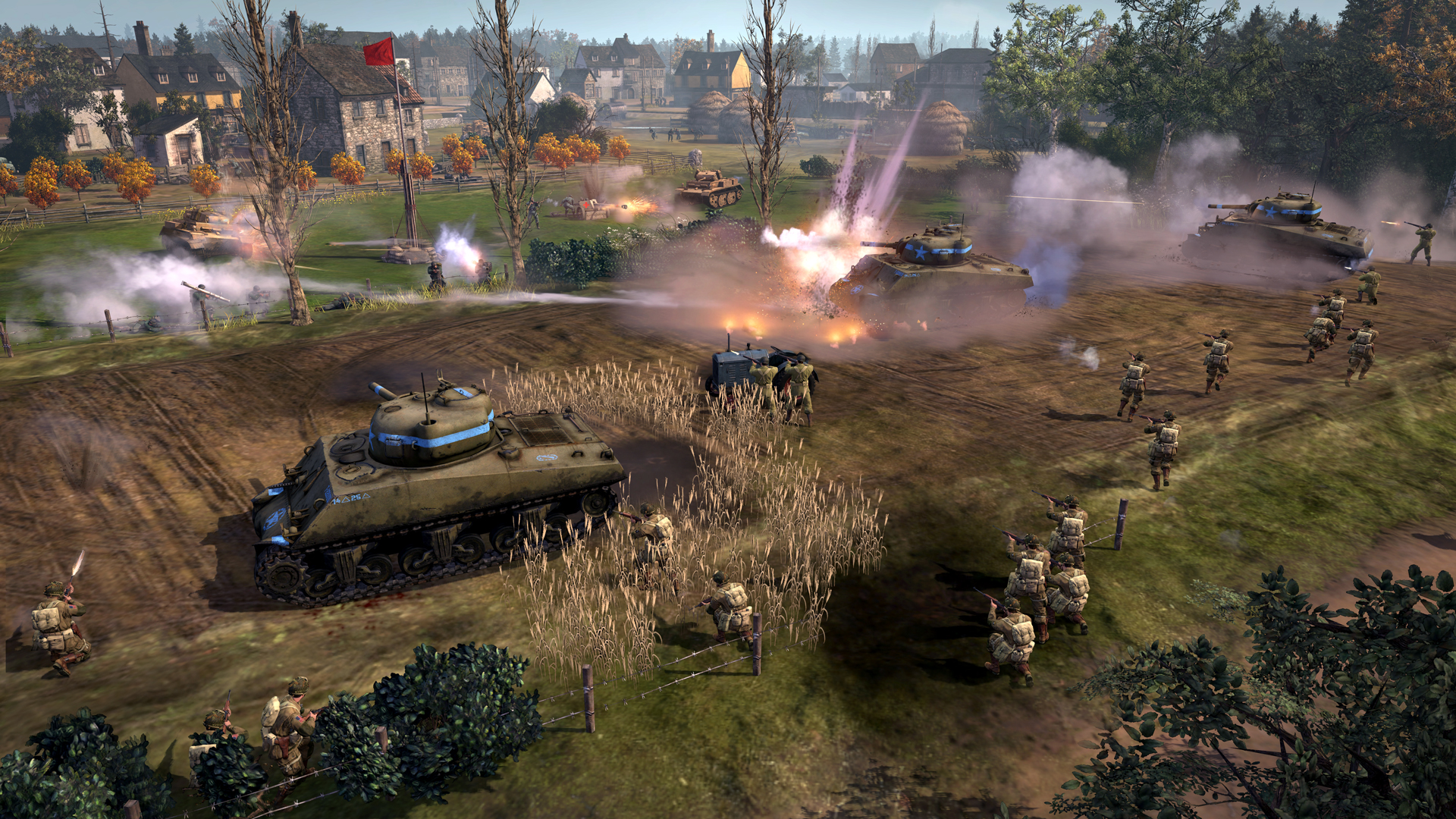 Company of Heroes 2: The Western Front Armies is a balanced multiplayer-exclusive outing based off an already excellent RTS game. The core gameplay remains as tight as ever, giving rise to a DLC that is worth its weight in salt. Nowhere can folks get such a visceral, tactically-nuanced, yet surprisingly accessible RTS. If you’ve been looking to get in on Company of Heroes, then this is the place to do it.