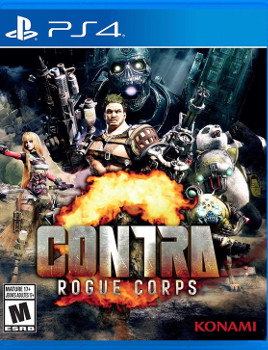 Contra: Rogue Corps was a surprise announcement a few months ago. The most recent Contra related game Hard Corps: Uprising came out in 2011 and it has been a decade since we’ve seen a game that has a proper Contra title. Initial reactions to Rogue Corps were naturally mixed. Historically, Contra has offered different perspectives in their games and has even attempted a couple tries at going 3D but the general consensus seems to be Contra is at its best when it’s 2D run and gun. Contra: Rogue Corps is a twinstick shooter, which is nothing at all like classic Contra fans may have been hoping for but once that expectation is dropped Rogue Corps can be a blast.

Some games take a while to get going. Some of them include long introductory sequences that go into a detailed and nuanced backstory before getting into the meat and potatoes of what the game is about. Contra: Rogue Corps is no such game. After a brief comic book style cutscene to cover the basic elements of the plot the scene shifts to one of the playable characters riding a missile like a surf board as it explodes in a group of aliens. This sets the tone for the level of over the top ridiculousness that the player can expect to encounter in the latest installment in the 32 year old franchise.

The events in Contra: Rogue Corps occur a few years after the events of Contra III: The Alien Wars in a place called the Damned City. This mysterious place is home to many terrible creatures and causes tremendous psychic damage to those who enter. The four playable mercenaries are resistant to the mind destroying effects of the Damned City, making it a potential goldmine for them provided they can survive the dangers that lurk within. The roster each has their own weapon types and special attacks, and the diversity extends into the inhuman realm, similar to the characters that were introduced in Contra: Hard Corps on the Sega Genesis. 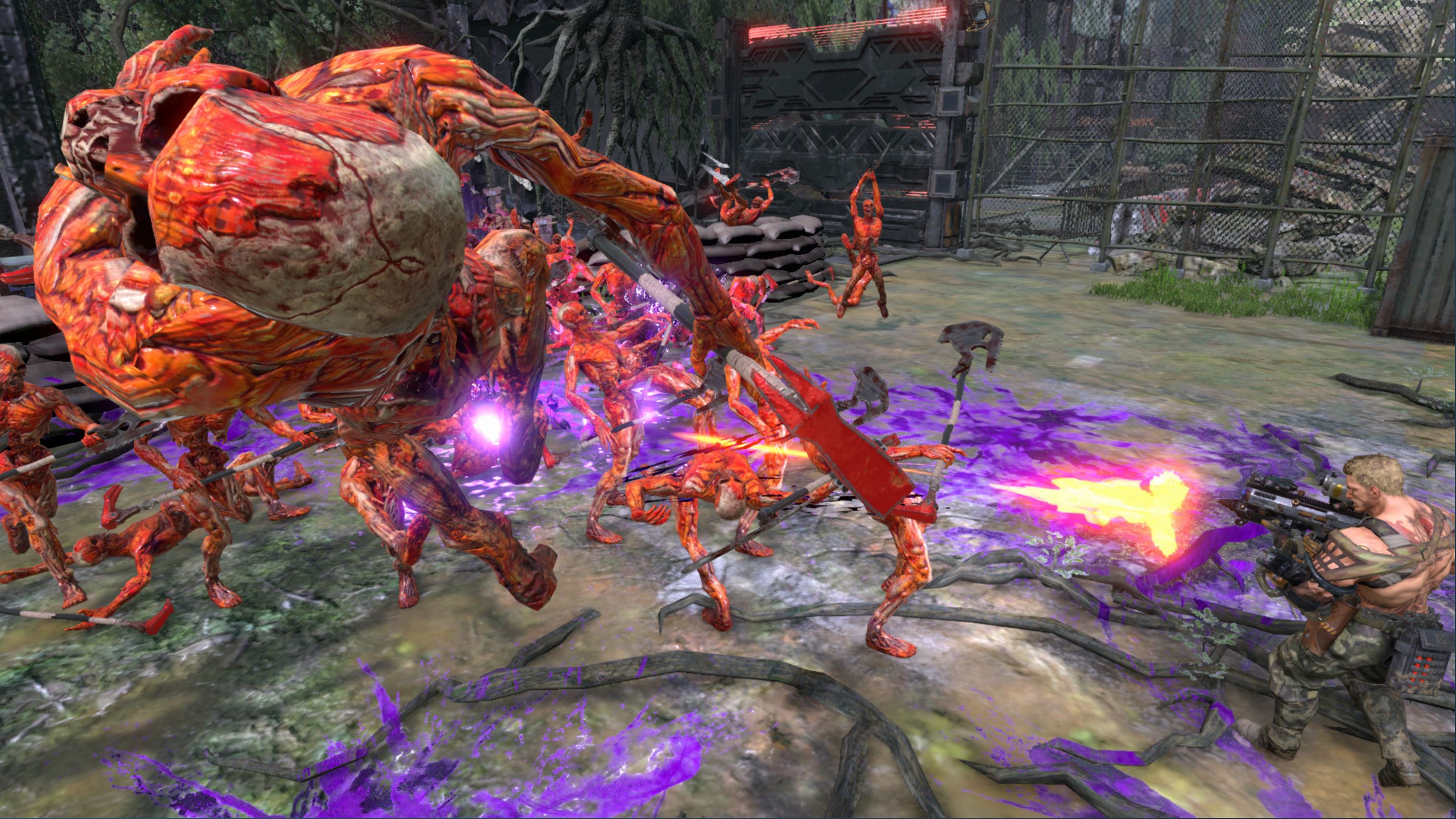 The first of these is Max Doyle, aka Kaiser, the typical Schwarzenegger clone with a machine gun in one hand and a bad pun generating drill for his other hand who likes heavy metal and Bach. Adding some femininity to the roster there is Sweets W. Manson, codenamed Ms. Harakiri due to the fact her midsection has been taken over by a parasitic alien being. Sticking a sword through him seems to prevent the spread of taking over her entire body but that doesn’t succeed in shutting him up. The cuddliest commando was once known as Kurt Steiner but now goes by HB for Hungry Beast. Not much is known about this character but somehow the brain of a brilliant scientist Steiner was transplanted into a cyborg panda bear. Lastly there is the Gentleman, who is some bug looking alien creature who has a penchant for killing but will do so in the most polite way possible. This is purely speculation, but he strikes me as someone who would enjoy a spot of tea drank from the skulls of his enemies.

To further deviate from the classic formula, Contra: Rogue Corps introduces light RPG elements in the form of weapon and character customization. In the camp that serves as a general hub players can use accumulated credits to purchase weapons that can do things like increase damage or decrease cooldown, along with more specialized functions. This can be done with each character’s weapons which allows players to personalize their arsenal in a way that best fits their play style. Weapons are not the only thing can be upgraded as the characters themselves can go under the knife to get some nice surgical augmentations with black market organs. These can have a variety of stat increases but getting surgery does have some inherent risks. Sometimes the bonuses can be greater than advertised or additional perks may be included, but sometimes there might some penalties that unexpectedly arise. Just like real life, surgical organ swaps are not something where skimping on the expense is recommended. The element of upgrading a character’s stats and weapons is somewhat of an alien concept to Contra games but it is a fun mechanic. 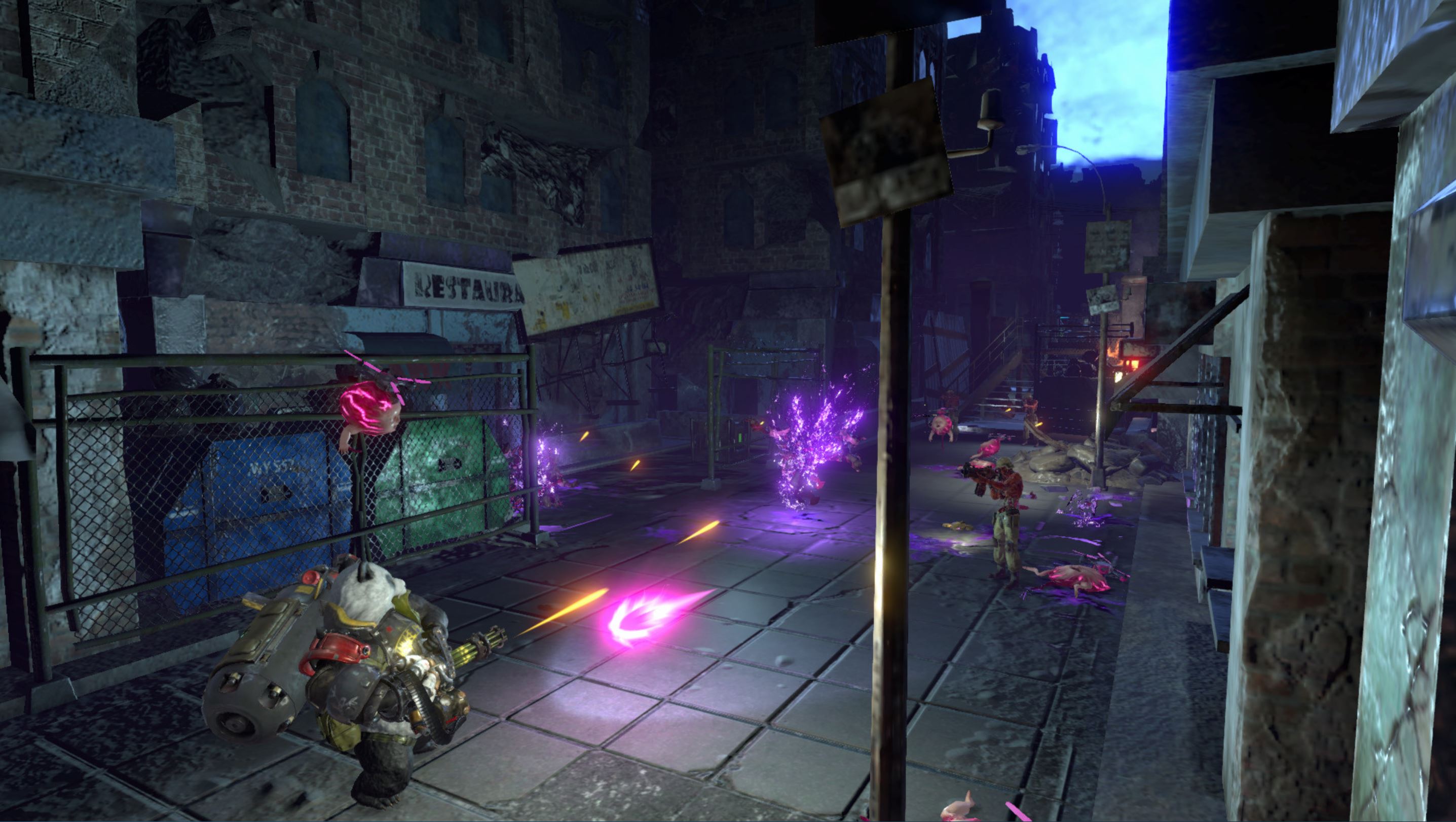 The gameplay of Contra: Rogue Corps is akin to classic twinstick shooters like Smash TV or Total Carnage if they were made today and were over the top, carnage filled homages to ‘80s and ‘90s action flicks. The twinstick mechanic is essential since the denizens of the Damned City tend to travel in packs and swarm around the player. Shooting while running and jumping in the opposite direction is a common occurrence but there are several classic arcade gameplay elements included with the run and gun approach. Blasting explosive barrels and vehicles to wipe out enemies in an explosion never gets old. Some enemies are immune to conventional firepower so the player must get creative with dealing with these foes. The dodge move and be used to stun certain enemies, and once the enemy is stunned the player could do something like pick them up to throw them into some machinery or execute a character specific Mortal Kombat style finishing move. Certain portions require the player stand behind cover and aim at specific targets. At camp there is a VTOL that players use to select missions. Earlier missions can be replayed to acquire credits, items or get a better rank.

The 3D twinstick shooter approach isn’t traditional Contra but despite the new direction of gameplay Rogue Corps does a good job of capturing the overall Contra vibe. There are a few nods to the classic titles, such as reimagined Contra music and classic weapons like the Spread gun appearing as temporary powerups. The levels are filled with various environmental hazards, hordes of enemies and gigantic boss battles. Past Contra titles have put the player in ridiculous scenarios before such as jumping from in air missile to missile or running atop helicopter blades but Rogue Corps cranks the absurdity up to eleven, and that is part of its charm. The tone of Contra: Rogue Corps isn’t bogged down by trying to cling to any semblance of realism. Instead it is action movie and comic book mayhem at its most ridiculous. Contra is known for its challenge and Rogue Corps is no exception to this. Ammo is unlimited but to prevent players from constantly shooting weapons overheat after a few seconds. 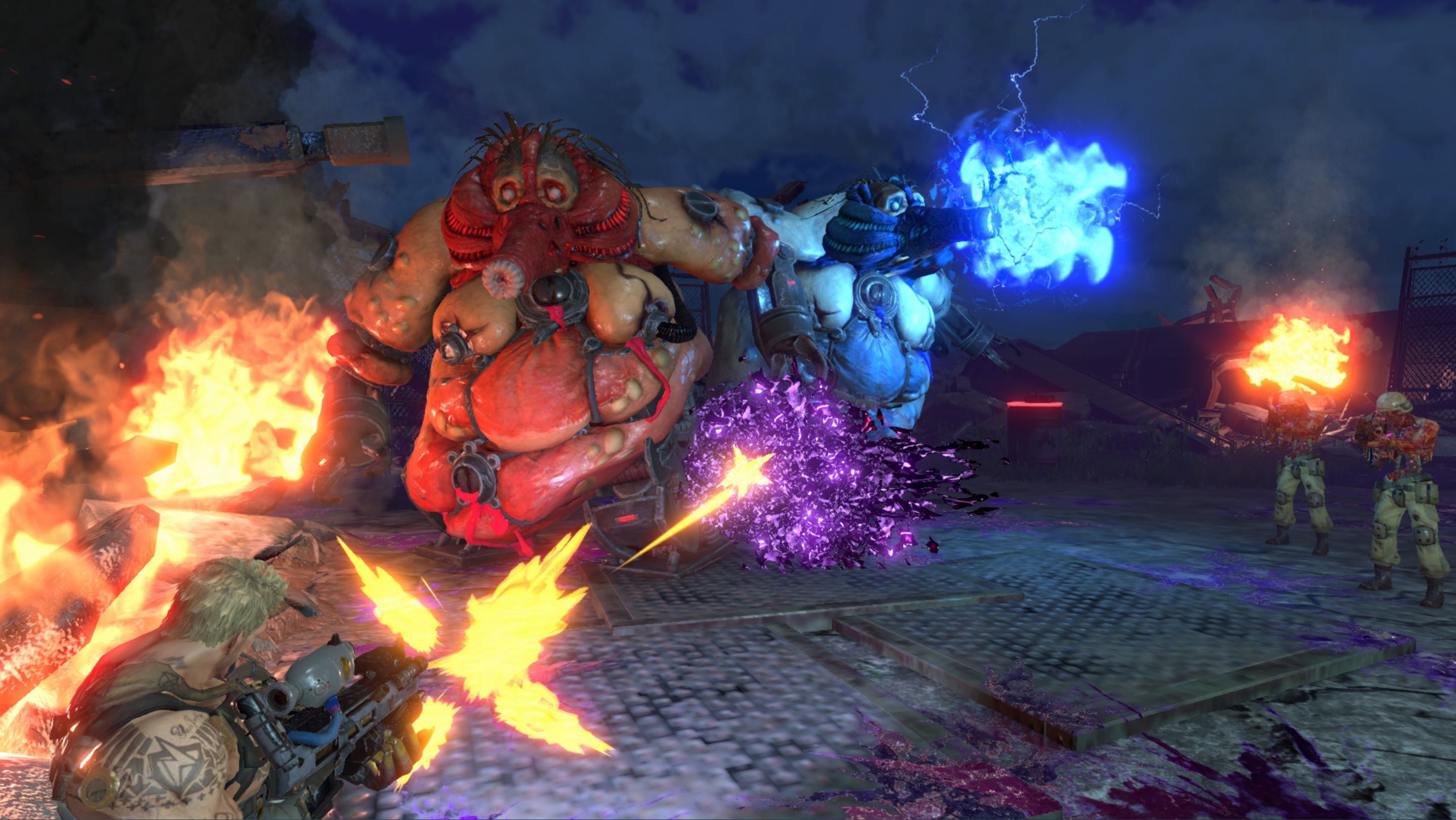 There are a few different ways to play Contra: Rogue Corps with other people. In keeping with tradition, there is couch co-op that supports up to four players and unlocks after some initial missions are completed. Players expecting couch co-op to make the game easier are in for a rude awakening. The game doesn’t use a split screen so all four players and the approximately eight trillion enemies are all crammed into one screen. Four of us who were progressing well in the single player campaign couldn’t clear a single screen and most of the difficultly came from not being able to keep track of what is happening on screen with so much activity. The inclusion of couch co-op was nice but ultimately PvP and single player were more fun. The campaign can also be played with friends online.

The PvP mode in Contra: Rogue Corps was a pleasant surprise. There are a couple modes we played, one is a traditional death match and the other is in the vein of Rocket League where an alien serving as a giant pinball has to be guided by bullets into the opposing team’s goal. The odd mix of soccer, pinball and firearms seems strange but somehow the development team was able to pull it off and make an enjoyable multiplayer mode out of it. The inclusion of these modes in Contra isn’t something I initially cared about, but after playing a few rounds, these quickly became quite enjoyable. The death match mode includes the joy of being able to add humiliation to defeat by throwing your opponent’s corpse into some grinding machinery. 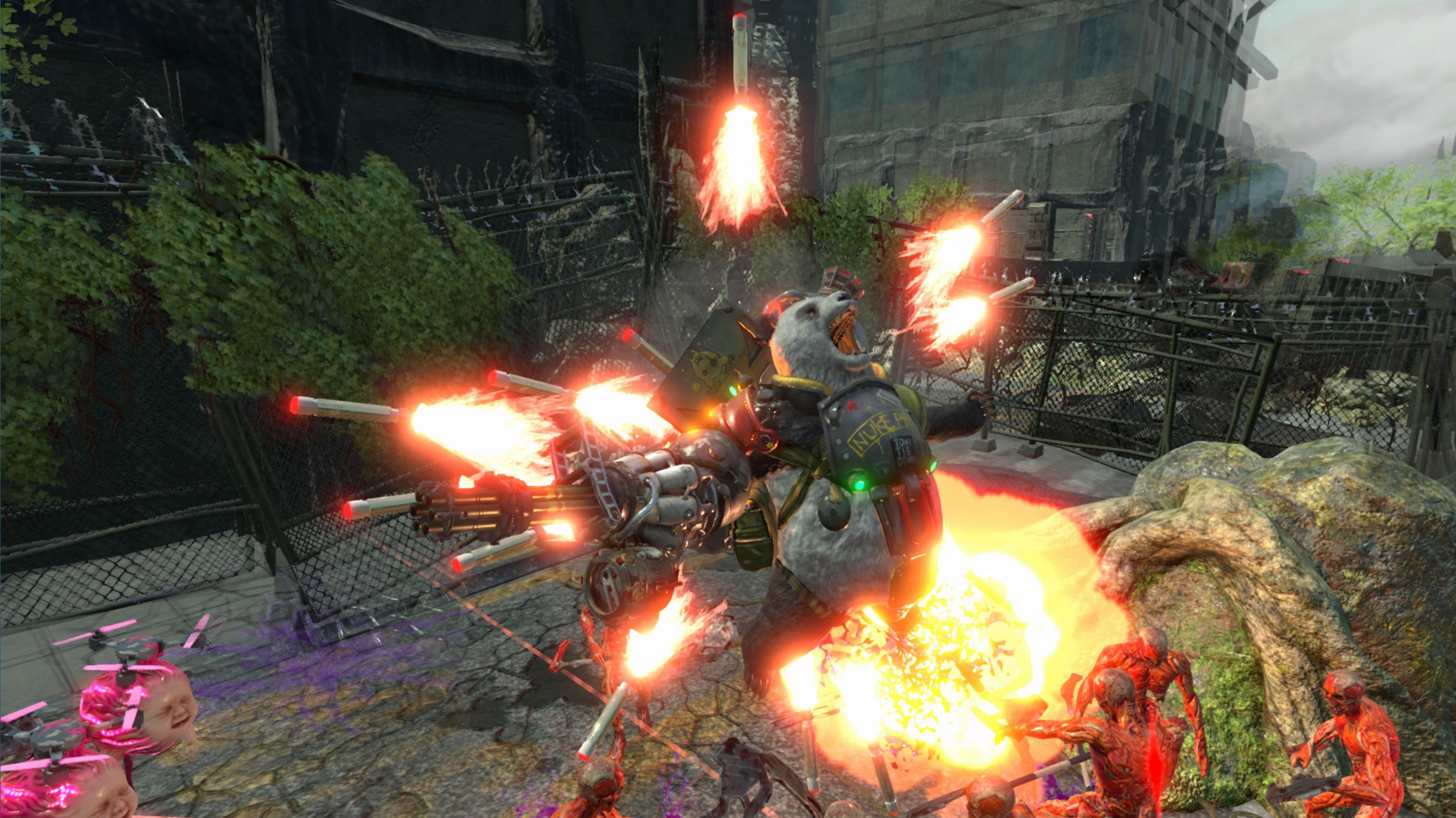 Contra: Rogue Corps tries to maintain the essence of Contra while changing the gameplay mechanics into something that doesn’t remotely resemble classic Contra. It plays more like Smash TV cosplaying as Contra with several nods to classic Contra titles. In the end, anyone wanting a return to the glory of 2D Contra won’t find it here, but removing expectations of what Contra should be will find a great deal of entertainment. The intro mission establishes that this is a title that doesn’t take itself seriously; it’s simple, over the top dumb fun with nonstop carnage and some dark humor. The characters, enemies and scenarios are all ridiculous but that is what makes the game so enjoyable.