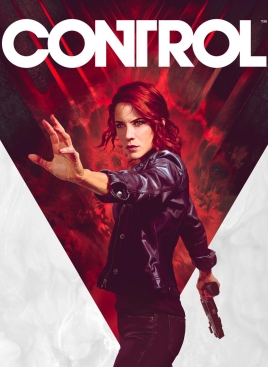 Between the first Max Payne games, Alan Wake and Quantum Break, Remedy Entertainment have never been afraid to experiment with various combinations of action games and a strong narrative focus. Even if the results sometimes get awkward (such as Quantum Break’s TV show/game fusion that basically just resulted in four live-action “episodes” being inserted between chapters), one does have to admire them for trying. And now we have their latest effort, Control. Taking inspiration from the SCP Foundation, Control sees Remedy doubling down on the paranormal, giving us a science fiction action game with the occasional twist of horror. So, is their latest experiment a success? Let’s take a look…

As the aforementioned SCP inspiration may suggest, Control centers around the Federal Bureau of Control (or FBC), a secret government organization designed to investigate potential paranormal instances described as Altered World Events (or AWEs), retrieve any seemingly ordinary or altered items that produce strange behavior and may have the causes of these events, and take them back to headquarters to further study them. Headquarters in this case being The Oldest House, a massive building in New York City that you can only find — or even see — if you’re intentionally looking for it.

Enter our heroine, Jesse Faden. Jesse has arrived at the FBC in search of her missing brother, having reason to believe he’s located here. And after an encounter with an odd janitor ally, she somehow finds her way to the office of Director Trench, the current head of the FBC…juuust as Trench commits suicide. Jesse is urged to pick up the Service Weapon, the gun that seemingly killed Trench, and in doing so, instantly becomes the new Director for the FBC. And just in time, since a mysterious entity known as The Hiss has invaded the FBC, possessing several employees and Jesse has to combat it now. All while dealing with the various oddities of the FBC. Oh, and the mysterious voice in her head that urged her to pick up the Service Weapon in the first place. 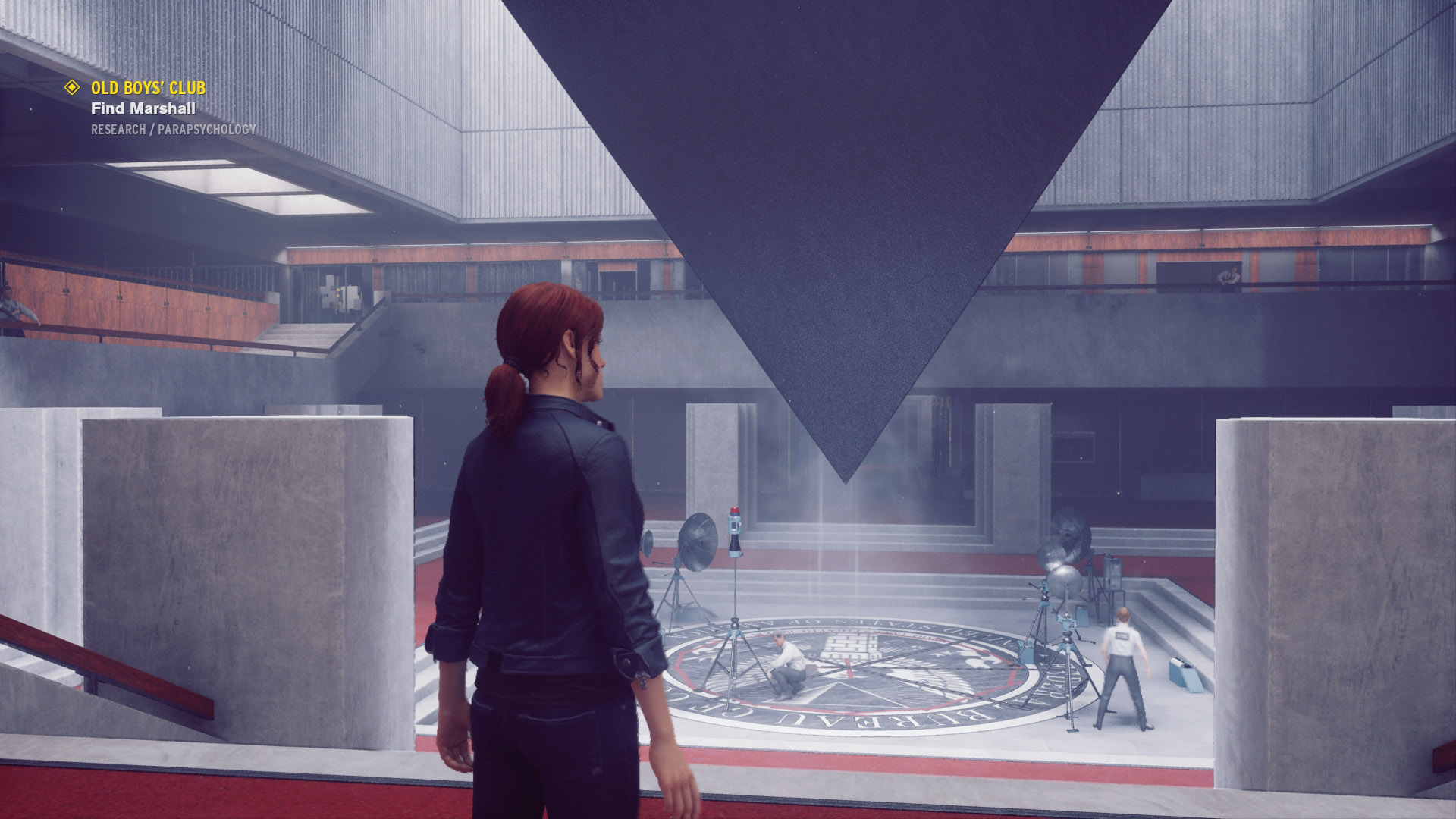 I could go into more detail about the aforementioned oddities, but really, they have to be seen to be believed. But as a taste, you have a bizarre upside-down alien pyramid known as the Board that you answer to, the Oldest House itself seemingly being alive on some level and constantly shifting around, mining for alien substances, bizarre mold infestations and a lot more. I say that Control has a twist of horror, but it’s the more subdued and surreal variety, such as the blend of creepiness and confusion that comes from a sealed-up department housing an item producing an infinite of clocks just laying around that employees are freaked out at. Possibly moreso than Remedy’s previous games, Control nails down that Twilight Zone-style atmosphere.

It helps that the visuals are a delight, contributing to the surreal feeling. The brutalist architecture of The Oldest House is a treat, with sharp, smooth surfaces and cube-like or squared structures everywhere. The house, however, does not take to modern technology well for various reasons (such as not being ingrained in the public subconscious yet), so older technology is the norm here, with pneumatic tube delivery systems, CRT monitors and VHS tapes, and reel-to-reel audio recorders. The blend of retro technology, brutalist structures and various office settings makes for a truly unique visual style that’s certain to grab your attention. And that’s not even getting into some of the unique sights in certain departments…

Of course, we do still have a story taking place in this rather stunning house, which is nicely executed. That said, while Jesse’s search for her brother and the battle against the Hiss makes for a satisfying main story, where Control really excels is in its world-building. Through the main events, various side missions and collectibles, you begin to learn more about the types of insane stuff the FBC has to go through, including documentations and first-hand glimpses of the various AWEs and Altered Items, which take the forms of swan boats, picnic baskets, rubber ducks and the like. The true highlights are when you see the supernatural bits collide with day-to-day office work, like complaints filed about disappearing bathrooms due to sudden building shifts. 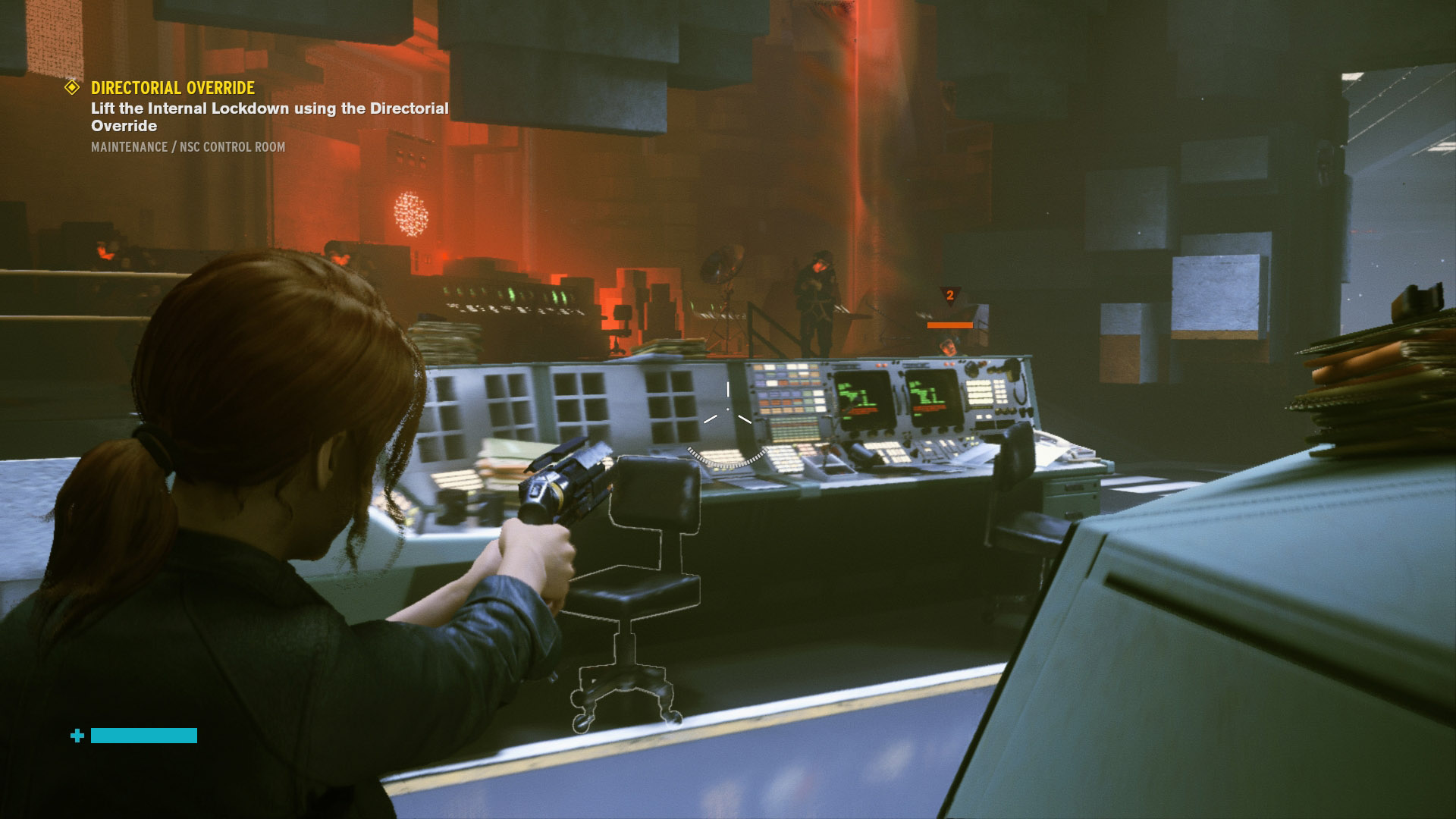 Control has a surprising sense of humor as well at times, which nicely provides a balance in tone when combined with the looming, otherworldly threat. Jesse can surprisingly snark quite well at times, the surviving FBC employees can be a shockingly chipper bunch (especially those obsessed with science), and various notes and memos detailing odd events can get bizarre. Not to mention Remedy’s signature bits of live-action footage, including a show called Threshold Kids which…well, again, you need to see it to believe it. Seeing it, however, can mean hunting for it. Control, you see, is also partially a metroidvania game as well, and not only does this mean advancing the story by unlocking new areas via certain powers and the use of keycards, but it also means exploring the deep corners of every area for various secrets (including certain side missions) as well, which are plentiful. So there’s always a lot to do and that means spending hours exploring The Oldest House. And even if it just means finding a single document about how to handle an Altered Item, it’ll likely be worth it.

The Altered Items make up a good chunk of Control’s more interesting elements, but it’s the Objects of Power (or OoPs, because the FBC apparently loves cute acronyms) that are even more important. Not only are these things vastly more powerful and dangerous, but they also grant various abilities to those who bond with them. So naturally, Jesse has to bond with more than a few of them in order to gain various skills such as telekinesis, levitation, mind control and more. And with that, we head into the combat, which is hands down the most enjoyable and satisfying part of Control.

In addition to the abilities granted by the OoPs, Jesse can also upgrade the Service Weapon via various abstract elements in order to unlock new forms for it. Suddenly, your pistol can now be a machine gun, shotgun and grenade launcher all in one. Oh, and it has infinite ammo, which simply just recharges. Not only is the use of all these tools easy to pull off even in the heat of combat, but it’s just so fun. You can unload dozens of bullets on one enemy all at once with rapid fire, then grab a fire extinguisher with your mind and launch it at another enemy while waiting for ammo to refill, easily evade an incoming rocket right after with a dash, then float into the air to spot the enemy that fired the rocket and switch to another mode that lets the Service Weapon deliver a charged blast at them. It’s smooth and satisfying, especially given the detail put into the destructible environments at times. As that example may suggest, the Hiss are quite capable of putting up a nice challenge. As the game progresses, different types of Hiss appear, and they attack in nice and varied groups that are always tough yet fair (well, save for a couple of cheap moments, like the one rare breed of Hiss that can turn invisible and drain nearly three quarters of your health with one hit). There are even a few boss battles as well – mainly reserved for the side missions – that both make for more interesting bits of story and some more challenging fights. 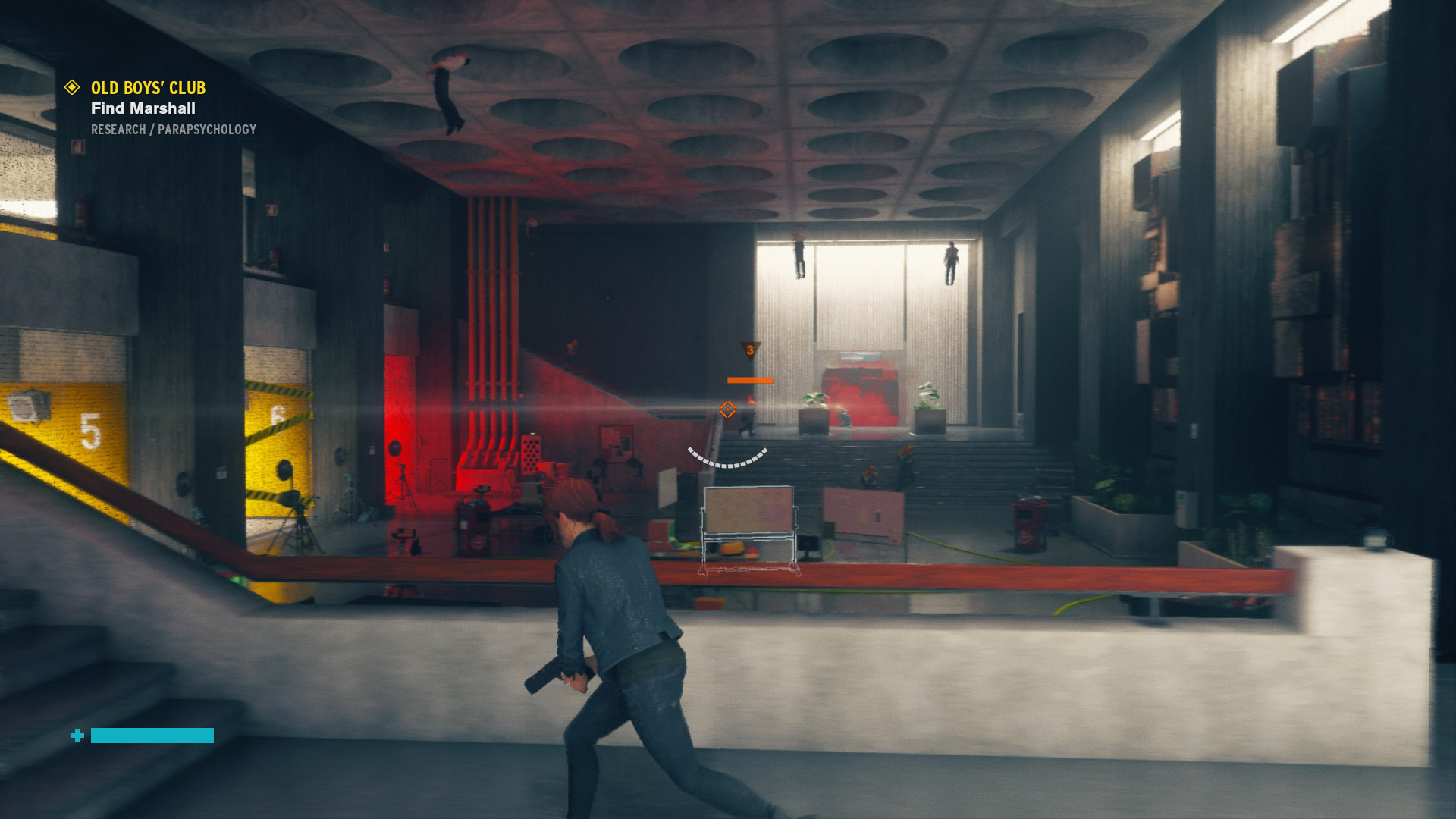 Control isn’t perfect, of course, and does have some issues. For one, a few features like the generic Bureau Alert timed missions and Countermeasure missions feel superfluous, along with the ability to craft random mods. Progress was already smooth enough and I felt no need to tackle them, because while they may provide personal mods and weapon mods that can boost things, enemies practically bleed mods as you advance and crates containing them are everywhere. They may add a little extra replay value for some and their addition doesn’t harm anything, though. The PS4 version also has some notable framerate issues at the moment during a couple of the more frenetic moments. I never ran into any of these issues that caused hindrances, but if top-notch graphics are a must, you may want to consider the PC version.

Control only had two major flaws in my eyes. The first comes in the form of the map. For a game that clearly has metroidvania elements, it’s difficult to get around sometimes. That’s because instead of a detailed map that you get when you pause the game like in several other action games, instead you press one button and the map for the current sector appears, covering the right side of the screen while the action still takes place. And not only are items and areas you come across such as locked doors not marked on the map as you progress, but you can’t even zoom in on the map or switch between floors. Yes, the game encourages exploration and to discover hidden secrets on your own, but one shouldn’t sacrifice efficiency to do so.

The other notable flaw comes with the checkpoints. Namely, the fact that the Control Points which you access in order to mark your progress and gain fast travel between them are the checkpoints. Which wouldn’t be too much of a problem, except there are several instances where the Control Points are spaced out quite a bit, requiring you to do a fair amount of backtracking should you die. And it gets even more annoying when you have to deal with respawning enemies. Yes, I get that the enemies need to respawn for health opportunities and ways to earn mods, but in areas like Central Research where there’s notable gaps between Control Points and missions you want to go to, it can get quickly aggravating. 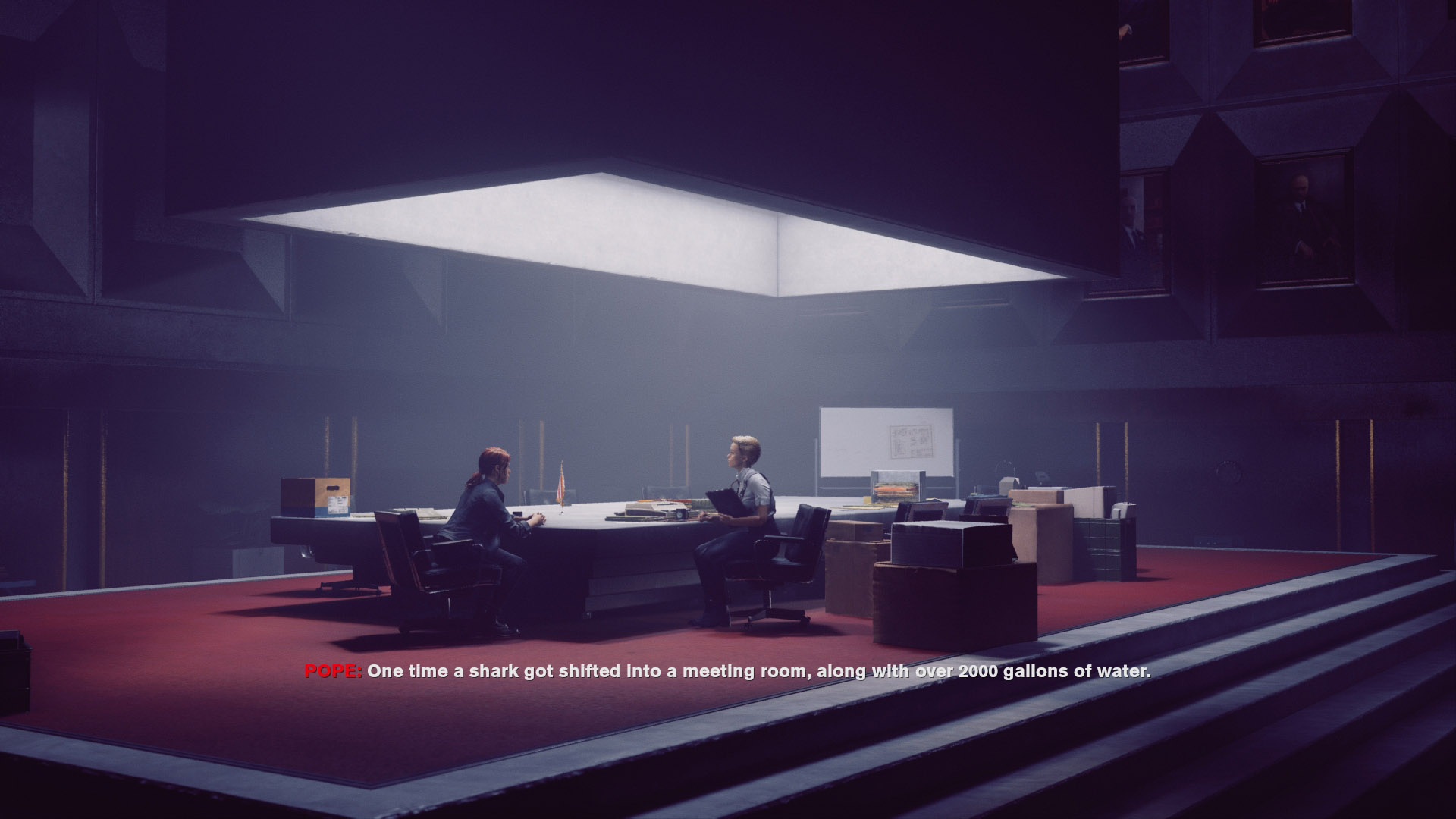 One could easily make the argument that Control could very well be Remedy’s magnum opus. Not only have they managed to craft a fun and insane world full of surreal delights and impressive visuals, but they loaded it with a massive amount of secrets to hunt for and paired it alongside some of the year’s best combat. The end result is a superb third-person action game that you shouldn’t miss out on. The game may end with a not-so-subtle hint at upcoming DLC set to come in the future, but the terrific gameplay leaves one wanting more. Plus, there’s still a lot of The Oldest House to explore, even after the main game ends, so we’ll easily be occupied with more of Control, and we wouldn’t want it any other way.