With the holiday season coming up, there’s no better time for a manufacturer to release brand new hardware onto the market. For Corsair, it’s the iterative Sabre RGB Pro Wireless mouse, a sleeker, more mobile version of their Sabre brand, showcasing some of the company’s latest and improved technology. This includes the ultrafast Slipstream Technology for less input delay, Omron durable switche, and of course a cordless free setup alongside a long-lasting battery. Coming in at nearly double the standard Sabre Pro mouse, are the new additions and added wireless connectivity worth the price of admission?

There’s numerous options that can be modified through Corsair’s iCue program. Outside of the brightness slider, there’s a sleep mode you can set for a certain amount of minutes, a power saving mode, the ability to display the battery gauge more conveniently (although it still doesn’t show the exact percentage), angle snapping, lift height adjustments and button response optimizations. Being a “pro” gaming mouse, this also offers numerous DPI settings upwards of 26,000, which is astronomical, something I doubt many people will actually fully utilize. You’re also able to adjust the DPI on the fly through various different tuning profiles, increasing the values by 50 up or down. The mouse also features three on-board profiles, allowing you to swap between the three with ease depending on what you’re doing. 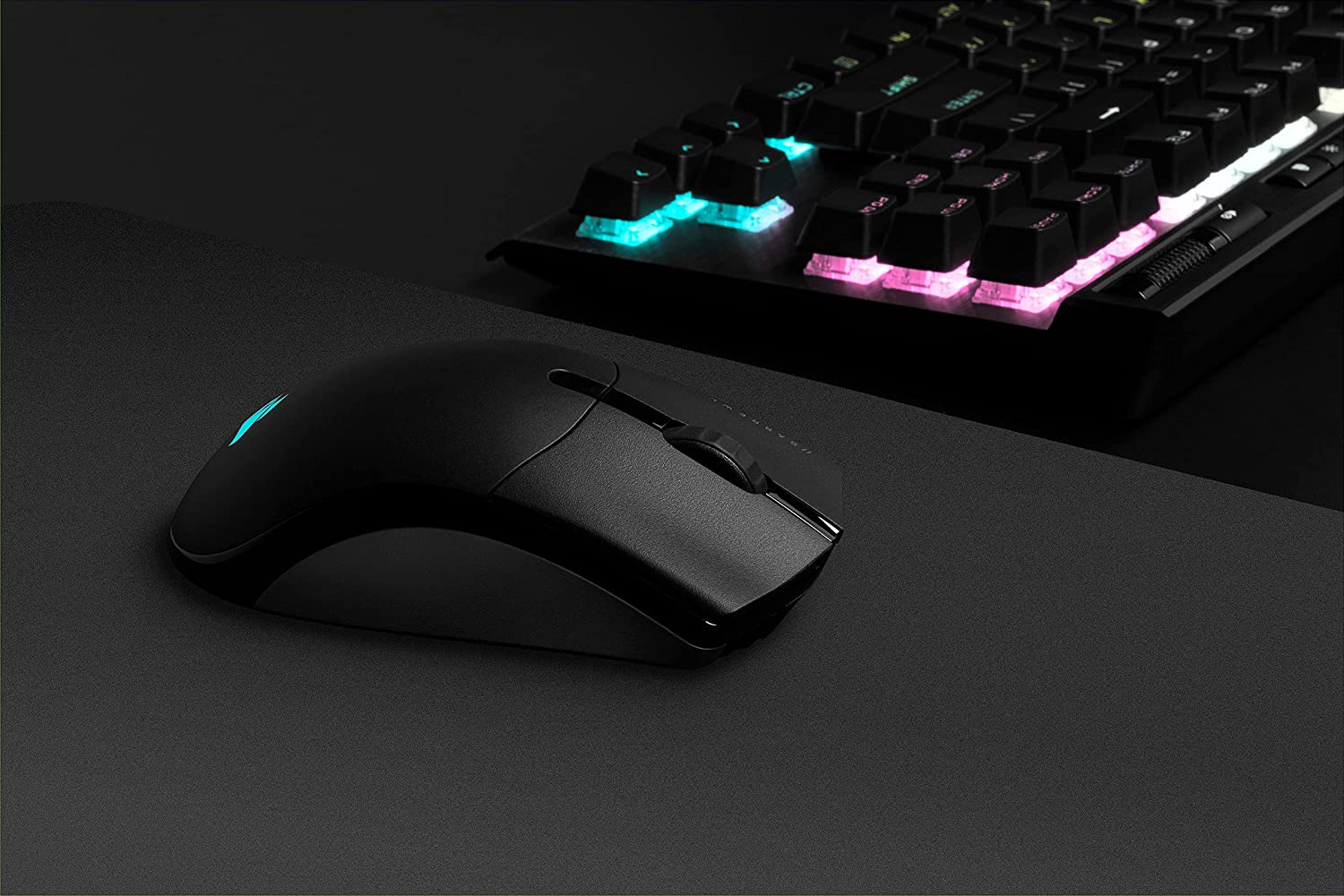 One trait that Corsair is going full in on with the Sabre RGB Pro Wireless is its polling rate. Most decent gaming mice generally get a 1ms. For Corsair, that wasn’t enough as with Slipstream technology, the company has been able to get 2,000Hz hyper-polling, giving players around .5ms of input. This is only accessible through the Corsair 2.4GHz USB wireless device, with the provided Bluetooth dongle only being able access 1,000Hz. While it’s noticeable to see the benefit of 1ms, with half of that I didn’t find any noticeable difference in competitive games on a 144hz monitor.

As for its design, the mouse sports an ergonomic design that perfectly fits in your hand, weighing in at 79g. Considering that’s only ten grams more than the standard wired alternative, this is a lightweight and mobile wireless mouse for gamers. It’d be hard to identify it as a wireless mouse when you pick it up because its battery isn’t weighing it down much. Everything about using the device feels well constructed, from the two fully-reprogrammable buttons on the side to the click-based scrolling mouse wheel. I would have liked extra grip somewhere, especially with the matte finish and plastic trim, but regardless, it’s suitably sculpted. On top of that, the left and right buttons are Omron switches, said to last 50 million clicks, so you shouldn’t see it degrading anytime soon. 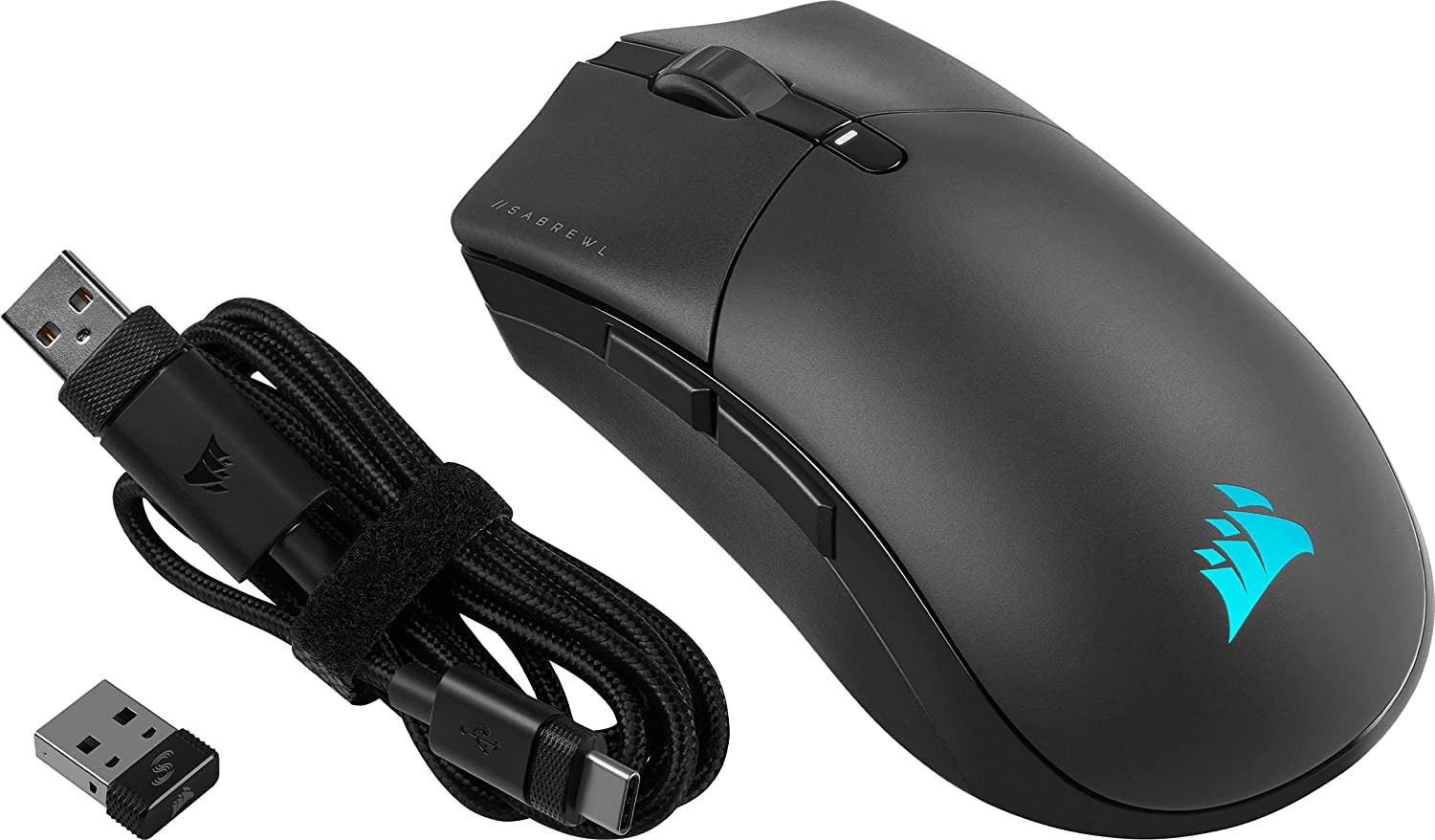 For a wireless mouse, one of the most important aspects is the battery life, and for the Sabre RGB Pro, it lasts a long time. With 75% RBG lighting, we got upwards of 62 hours on the 2.4GHz Slipstream wireless adapter, with the lowest being around 55 hours. Setting up the mouse itself is simple, with it coming with its own Bluetooth adapter. If you already have a Corsair Wireless Receiver, you can simply pair it through that with ease — and as we mentioned, it benefits from it with an astonishingly-fast poll rate. The RGB lighting itself is minuscule in the grand scheme of things; it can look good and coordinates with other devices, but it’s a simple Corsair logo that’s on the end of the mice. This means whenever you’re actually using it, you’re covering the entirety of the lighting effects. There’s no edge, scroll wheel, button lighting; it’s just the one logo, so while it contributes to its minimalist look, the lighting setting can be turned down considerably to preserve battery with little worry.

The Sabre RGB Pro Wireless uses Corsair’s iCue technology, and this is where things drag. I’ve had an unfortunate number of issues over the course of reviewing the mouse where it would affect other products, such as the K100 keyboard or the HS80 wireless headset. Primarily, the devices would stop working and flicker on and off for a second or two as if they were restarting quickly, and this would happen once a day, at best once every other day. Fortunately, this problem has mostly subsided over the last few weeks, but it caused frustration. Outside of this, iCue only shows four different settings for the battery (High, Medium, Low and Critically Low), which I wish displayed an actual percentile, but sometimes iCue will just not identify the mouse’s battery at all outside of charging. Other things such as some of the settings will be inaccessible at inopportune times and sometimes the device doesn’t work while connected via USB. At the very least, you’re able to remap all of the keys with ease. 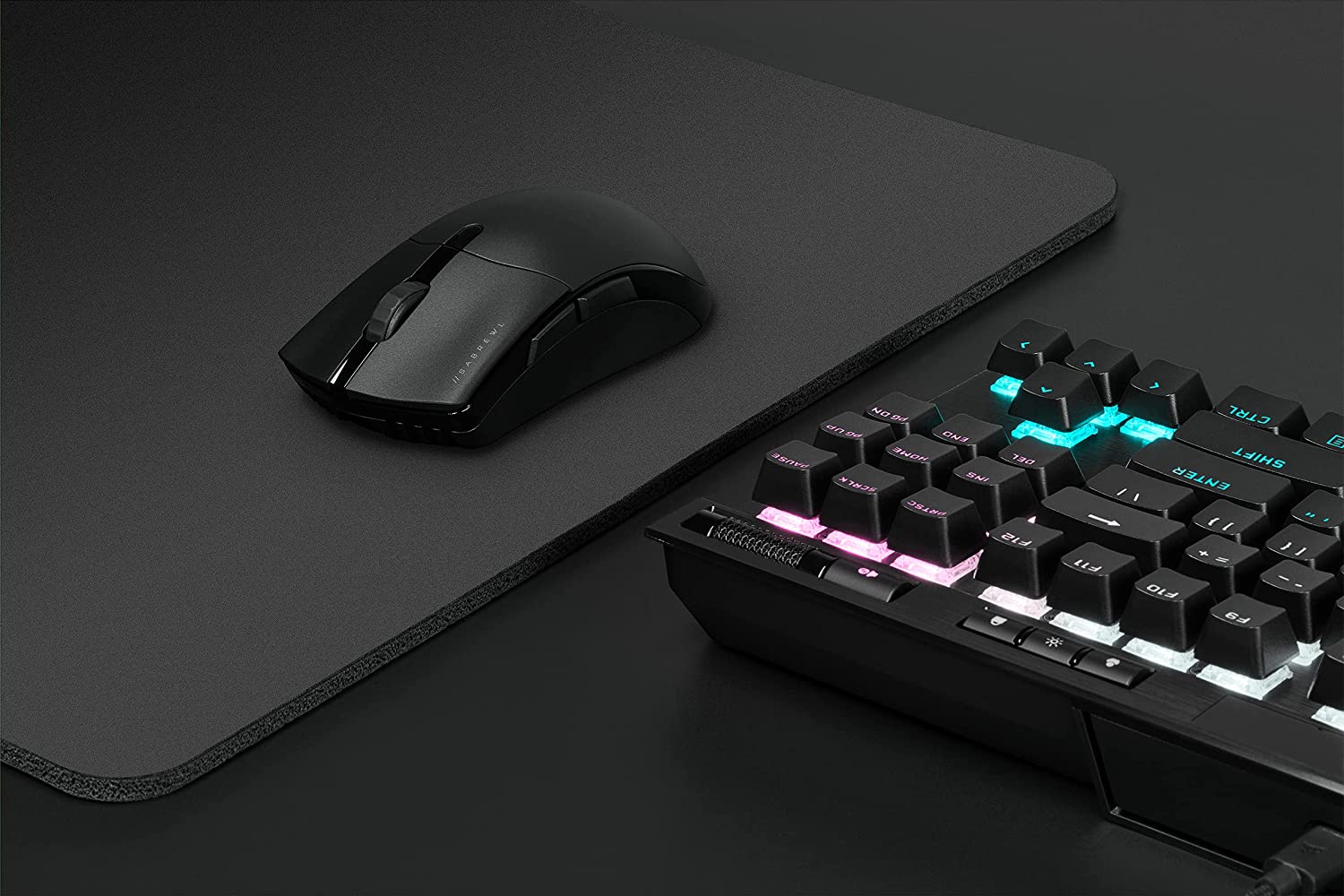 The Corsair Sabre RGB Pro Wireless gaming mouse is a lightweight, smooth device that has a lot going for it. Its minimalist look works well, even though the RGB lighting is standard to the point you can turn it down to preserve battery. Speaking of which, the battery life lasts surprisingly long, from the standard Bluetooth adapter reaching as high as 90 hours without a charge and the Corsair Wireless Receiver around 60 hours, all of which where the RGB lighting being set relatively high. The latter sports a fast .5ms (2000Hz) polling rate, although its value will likely be unnoticeable to most consumers. Unfortunately, we did have issues with the software, from frustrations to components that we wish were better expanded upon. Regardless, the Sabre RGB Pro Wireless is a phenomenal lightweight gaming mouse that should give competitive gamers the edge.