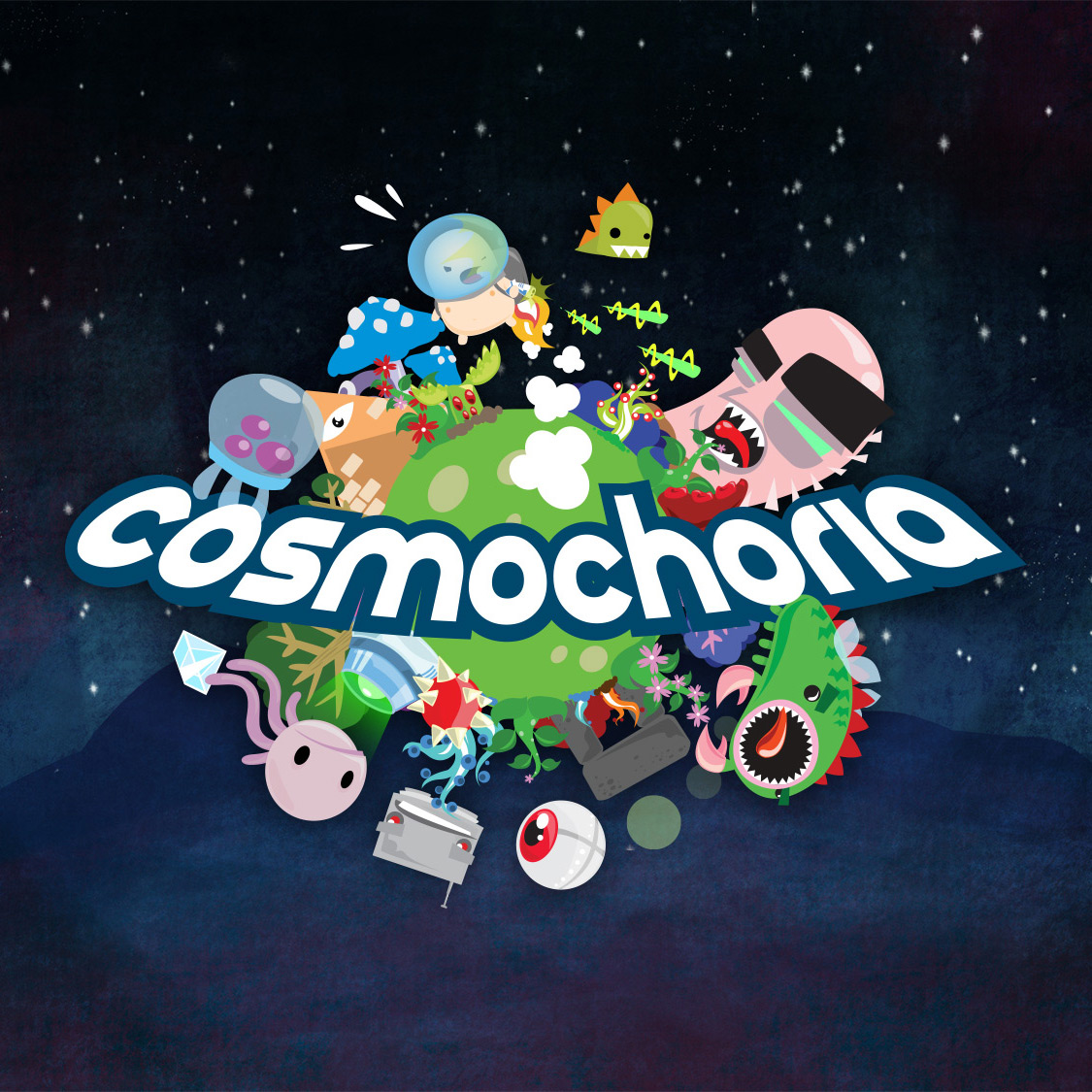 Radiation is irrelevant and vacuum a mere inconvenience that’s easily sidestepped by a classic fishbowl-style helmet. Everyone knows that outer space is best experienced with the cold, lifeless void tingling against your naked skin. Bring along a blaster to deal with the occasional flying saucer and the infinite expanse of the universe can become your playground. Cosmochoria is the story of a little naked space-guy tearing through a galaxy of alien baddies and lifeless planets, shooting down the former while reviving the latter. It’s nurture and genocide in equal measure, although to be fair, the aliens started it.

A cataclysm decimated all life in the galaxy untold ages ago, leaving the planets little more than lifeless hunks of rock. One day a traveler finds himself in the middle of the collection of planets, armed with a blaster and with only a single seed in his possession. If tended properly, however, one seed can lead to another, so maybe with a bit of care the world can be revived. After first placing a flag and naming the planet, he plants the seed and waits for it to sprout while fending off a few stray flying saucers and the little wandering aliens they drop on the planet’s surface. A short time later the plant sprouts, bearing a few glowing seeds, and the planet has a little bit of life restored to its heart. If one plant is good then more will be better, so after a little simple gardening the planet has a nice selection of flora covering its surface. When enough plants have fully grown the planet bursts to life, atmosphere bright with color and puffy white clouds, and it even restores some of the traveler’s lost health. By then he’s got far more than the single seed he started with, though, and there’s still a large number of dead planets that could use some love.

That’s going to be difficult to pull off, though, because the alien forces seem intent on keeping the galaxy dead. The square map is filled with red dots indicating 2D planets that range in size from sub-Pluto diameter mini-circles to giants that have half their mass off-screen, but space is a dangerous and cultivation requires far more laser fire than your standard garden. Cosmochoria‘s goal is to nurture life back into the galaxy but it’s going to take a lot more shooting than planting to do this. 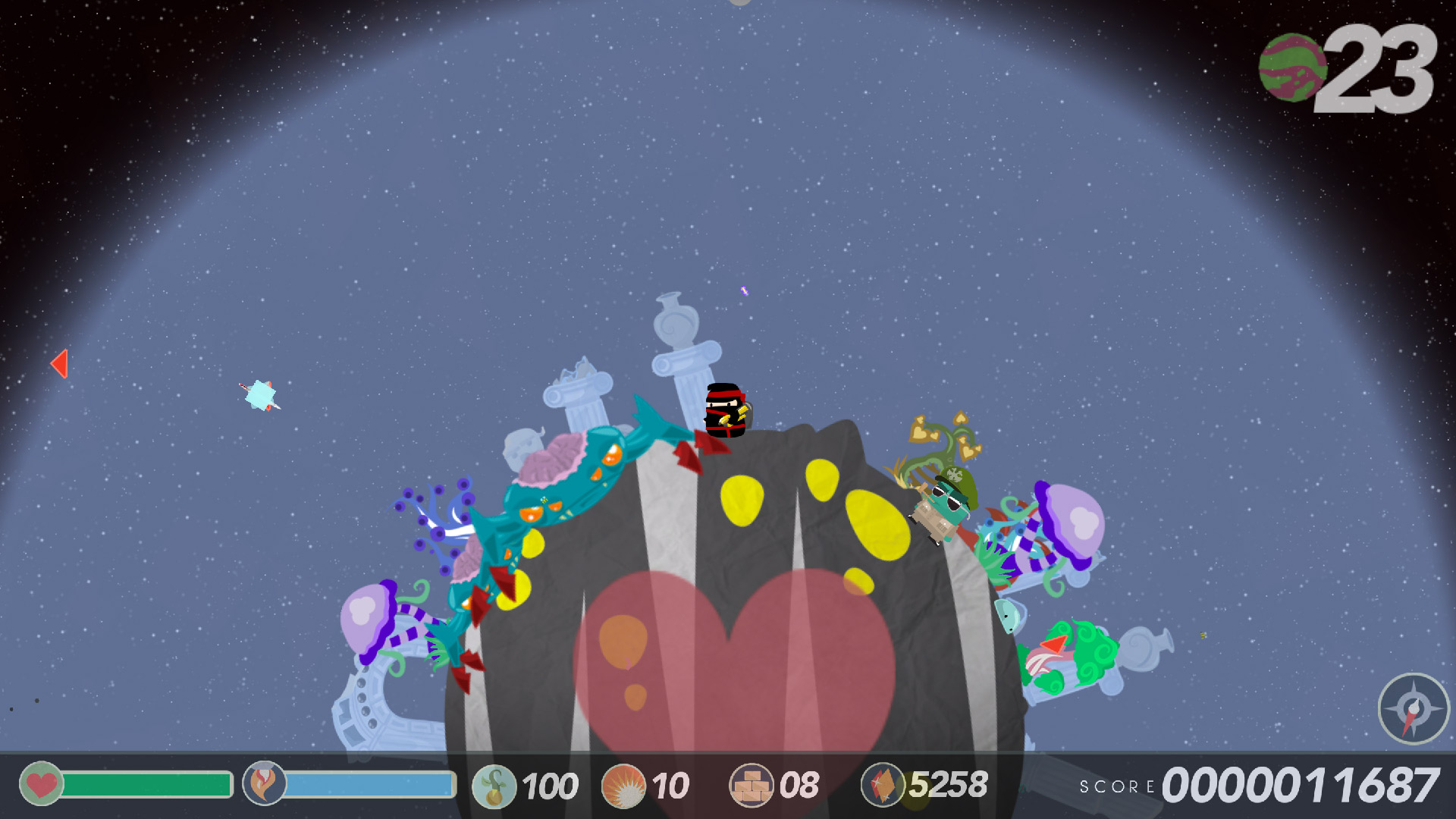 Each game starts on the surface of a new planet, one of fifty in a randomized map. As the naked little cosmonaut runs around the surface the entire level rotates, keeping him always on top of the world. Enemies spawn and fly in from all directions, some coming from space and others dropping down to or burrowing up from the planet’s surface, and clearing out a peaceful moment for gardening gets to be nicely hectic as the screen fills up with creatures and their various forms of firepower. Saucers pepper the planet with laser-fire, blue electro-heads rain down lightning, crab-spiders burrow up from the earth, eyeballs drop exploding spike-bombs, and giant planet-dwarfing bosses fill the screen with fireballs. It’s dangerous out there, but at least you’re well armed.

Every destroyed enemy drops a crystal or two, and these are currency you can spend before starting a new game. Speed, acceleration, jetpack fuel capacity, and other abilities have multiple levels of upgrade to purchase, while other perks are single-purchase unlocks. Crystal magnet is a must, as is faster planting speed, and the map is super-handy for keeping track of which planets you’ve seeded. Favorite upgrades come in the form of new guns, though, most of which you can buy but some of which need to be earned. The starting pea-shooter just isn’t going to cut it, but a homing blaster or shotgun? Much nicer, especially once you’ve earned a power-up or two. To really change things up, though, you’ll want to find a costume that grants unique abilities. 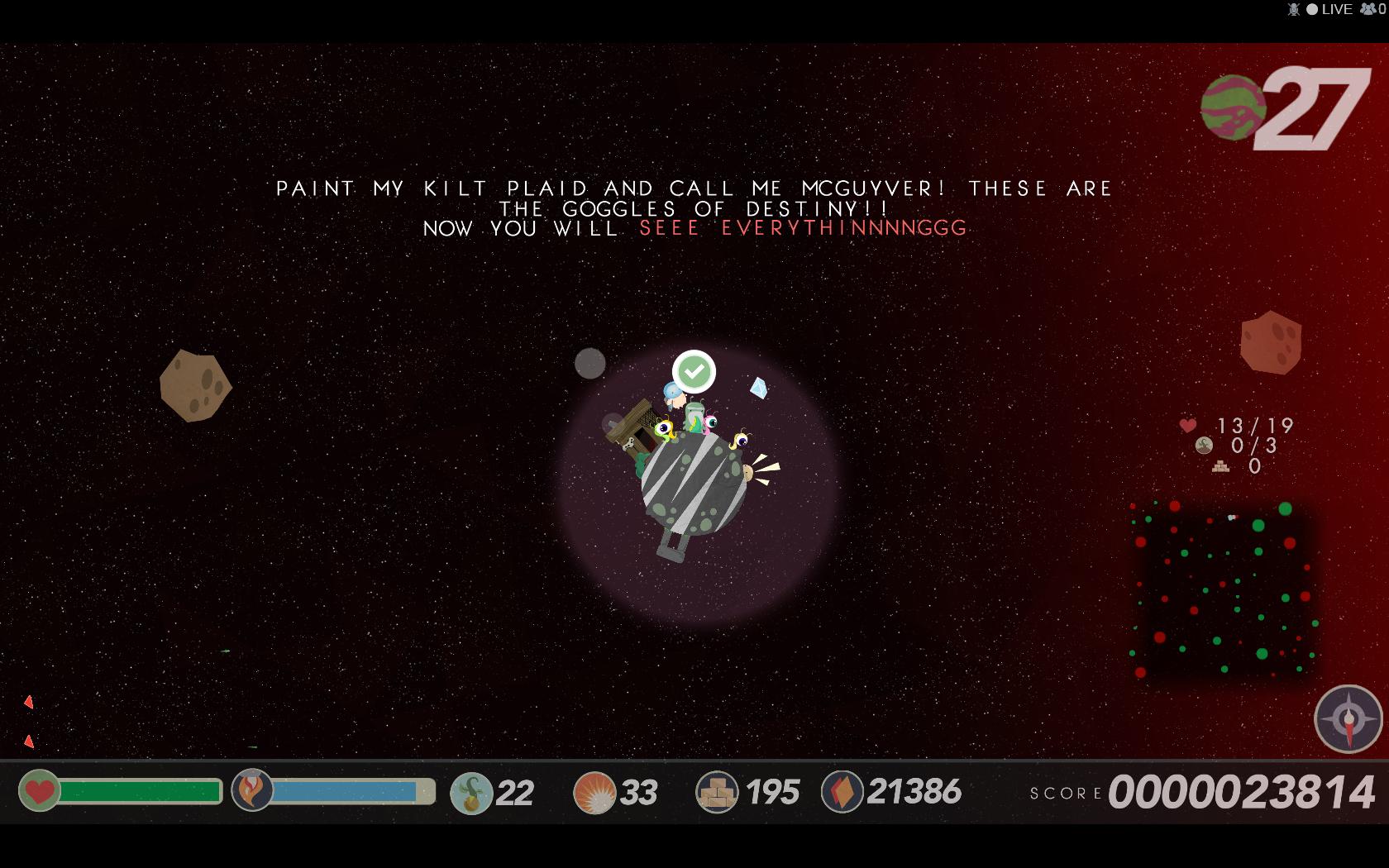 The planetary cluster of Cosmochoria is filled with many strange things aside from planets and aliens, and much of it directly effects how the game is played. Each revived planet spawns a chest that may contain extra crystals, bricks, or other standard items, or it might have a much more rare rule-changing treasure inside. These artifacts can make the game easier or harder, and you can activate as many as you like at once to stack effects like making enemies more numerous and aggressive, limit healing, or even completely remove offensive options like the screen-clearing ultra-nova. Beating the entire game without an artifact in use is pretty straightforward, once you’ve bought enough upgrades, but the artifacts are a fun way to really have Cosmochoria put you through your arcade paces. Plus there’s a large number of secrets and extra goodies (like helper-pets) that are highly unlikely to appear unless the difficulty gets cranked up a few notches. There’s a layer of depth to progression that isn’t immediately apparent, and unlocking secrets will take a decent amount of experimentation.

While Cosmochoria is a wonderfully shooty arcade adventure, it’s worth noting that, in its initial release, it can also be a bit buggy. The hornet hives tend to float in the air or get buried if they don’t spawn on a normal-sized planet, flying saucers frequently have trouble orienting themselves to a planet’s surface, and the vacuum dragons can get confused and go shooting off into space. More seriously, I’ve seen a complete game-freeze (just once) using the warp gates found on some planets, and after a multi-hour session the final boss music broke up so completely that it robbed the encounter of its drama. Most of these are small and, hopefully, easily fixed, but there’s still some work left to do for final polish in the 1.0 revision. 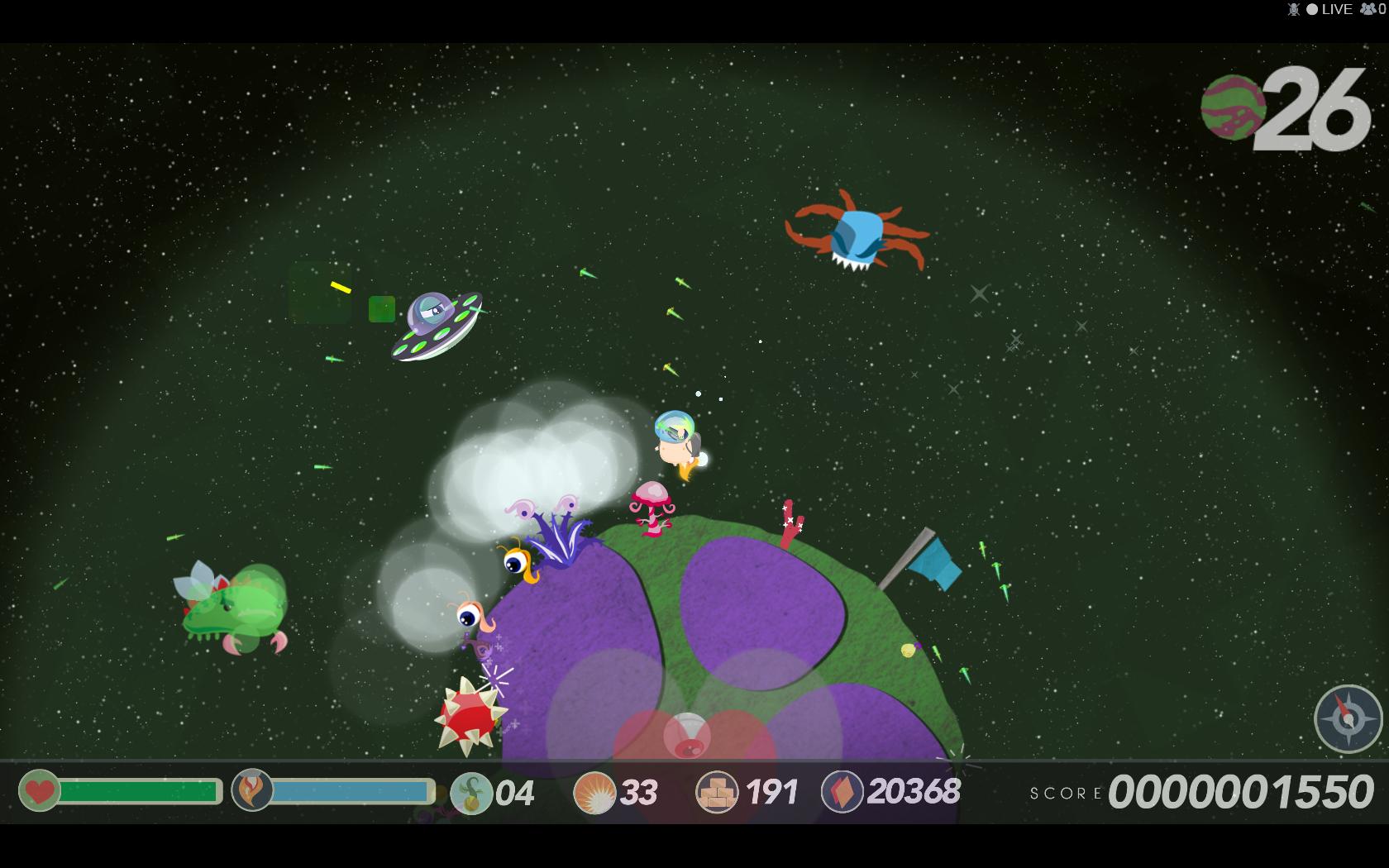 Cosmochoria is a wonderful, unique little shooter, filled with instantly-accessible action but with an adorably quirky style that instantly sets it apart.  The naked little spaceman and menagerie of playfully-designed aliens make the galaxy a fun and lively place to explore.  The need to carve out a few seconds to tend to a plant by shooting down endlessly spawning creatures creates a nice balance between nurture and action, while the stress of incoming danger makes every spare moment of gardening feel valuable.  Cosmochoria is a fun, clever, adorable game that’s bursting with humor and personality, plenty of fast shooting action and enough secrets and extras to keep you playing long after your first encounter with the final boss.