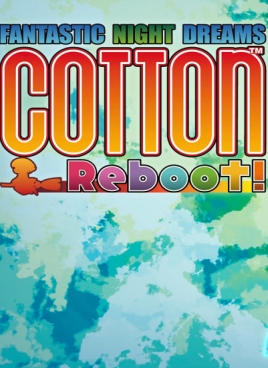 The Cotton series has laid dormant for over twenty years with its last incarnationtion on Sega Dreamcast. The original game was a pioneer in the cute-em-up sub-genre of shooters and stood out in arcades and on consoles, while sequels kept the spirit alive with fast action and in the case of the DC game Rainbow Cotton, a totally new behind-the-back perspective. The remake features a completely revamped color palette that’s more bold than ever before while also having more effects on-screen and more detail — making a game that winds up looking better than ever while still keeping the charm of the original intact.

Cotton Reboot! showcases the original game in a way that builds the world up even more and the quirky sense of humor is funnier than ever thanks to the increased detail in all parts of the presentation. Every part of the presentation has been remade — enabling for more immersive environments that also work nicely with the arranged soundtrack. The original release was a pioneer in terms of a shooter that attempted to tell a story, with an evil witch trying to take over a fairyland and a small fairy helping out Cotton as she flies on her broom and tackles enemies across areas from graveyards to clock towers. Despite it being a light-hearted shooter, many of the environments would be right at home in a Ghouls ‘n Ghosts game and serve as a stark contrast to what one might expect normally from a cute-em-up. 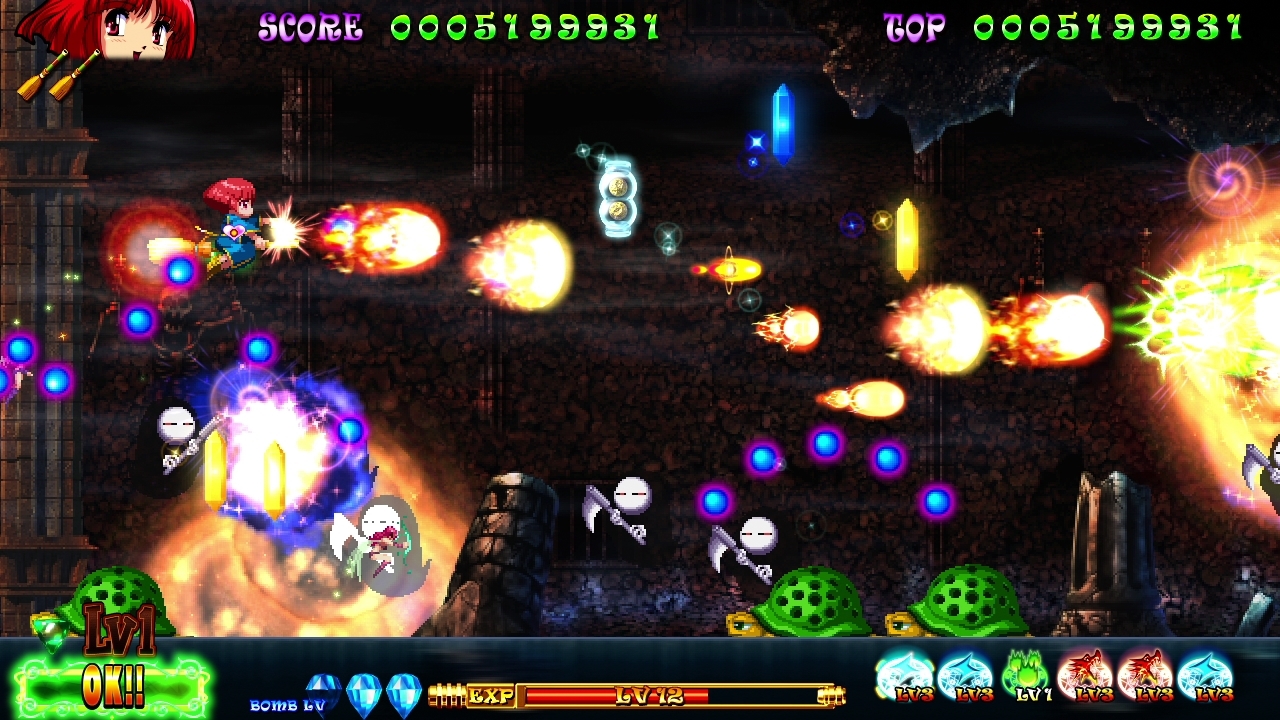 Bright colors are still featured, but used for things like your own gunfire, Cotton’s attire to help her stand out and enemies to help them stand out in relation to the backgrounds. Cotton’s weaponry is also brightly-colored, with bold orange, yellow and green weapon blasts alongside the ever-trusty short-range bomb to help take out swarms of enemies — or just dole out massive damage in boss fights. The stage design in Reboot is the same as it was before — but areas do feel completely different due to the redone presentation. Enemies having more detail makes them more menacing — like the early-game scorpion-style boss that now shows more detail on their back and sword to make their visage more imposing than in the original game.

Some areas have been expanded upon to give more context to the events. Area four now has a lush greenery and stone-filled part right before the usual dark cave that makes up the bulk of the stage — with visual flourishes mixed in to add signs of the real world. Having little beams of light show through breaks in the ceiling area adds a lot to the atmosphere and makes the in-game world feel lived-in. It’s a small sign of wear and tear, but it helps showcase just how much damage has been done to Cotton’s world by the evil witch and her band of bosses. It’s a little piece of detail work, but it shows that care was put into making this incarnation of Cotton the best-possible one yet. 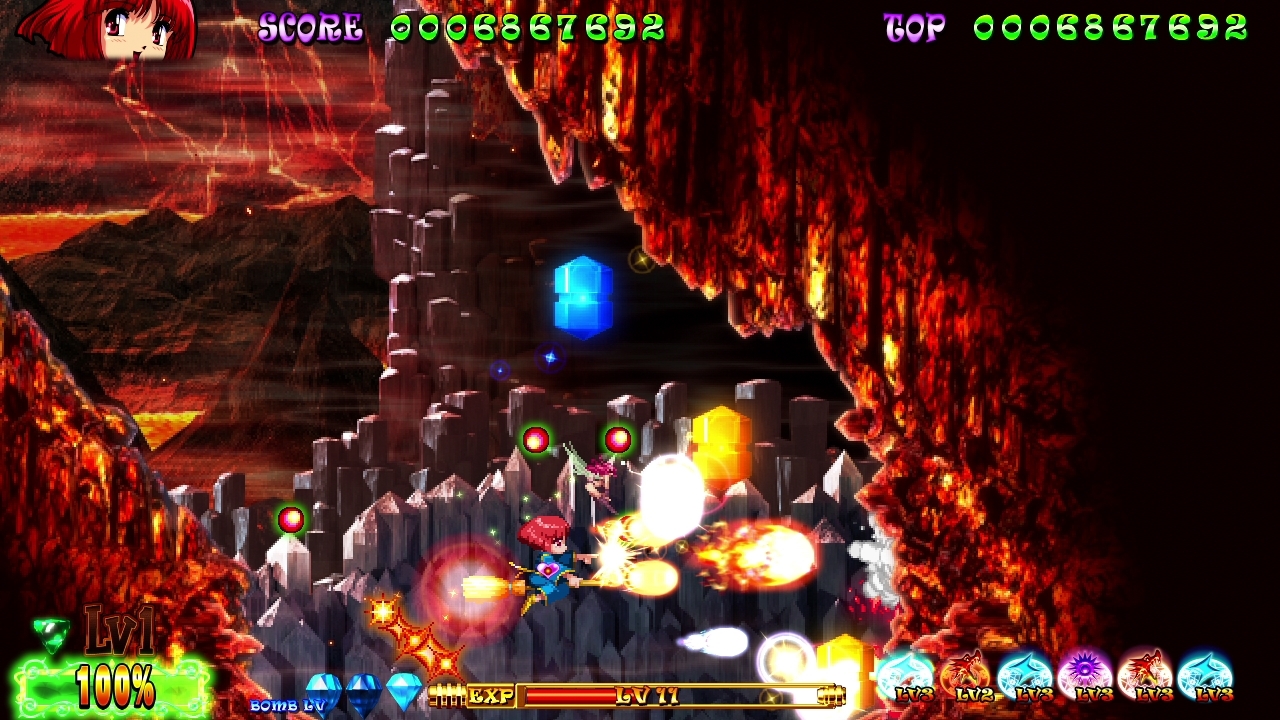 Cotton has always been a perfect side-scrolling shooter for people who weren’t normally fans of them because of its light-hearted tone and fairly gameplay. It’s not a bullet hell game, but it will test your mettle with enemy placement — and that’s something the remake handles better. Thanks to an increase in color variety and especially in contrast compared to the stage elements, it’s much easier to see enemies that would normally be off in a corner or would just come into view as the player scrolls into a new area. In the original game, it’s easy to get blind-sided but that problem has been largely resolved in the remake.

The core of what made the original game so fun is intact, and thanks to that game being included via its X8600 port, there’s no choosing which version of the game is best as each is playable right from the main menu. This makes Cotton Reboot a fantastic value overall since you get two full games included and while both are quick experiences, like any score-based game, there are goals to hit beyond just reaching the ending. It’s easy to beat the game, but it’s another to top the score chart and rack up massive multipliers — or to limit your run to a couple of continues in total. Having infinite continues is nice though and encourages players to just keep going while still teaching them about the enemy patterns and various weapon power-ups. 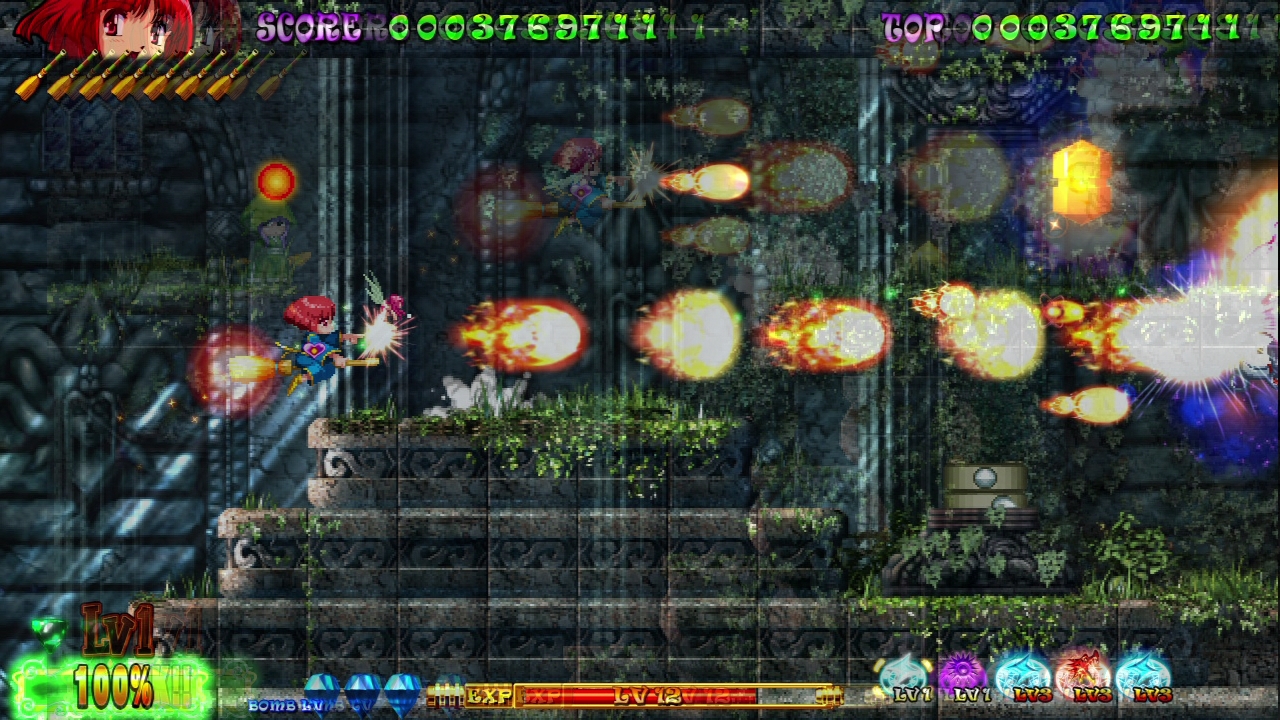 Losing your upgraded weapons after a death doesn’t hit as hard here since the main one you’ll lose is the multi-fire and there aren’t a ton of scenarios where you need to have that to do well and minimize damage. A lot of times, enemies just stay on a single line, so you can just line them up and then at some point you’ll eventually regain that lost power anyway. Control-wise, being able to fully remap everything is fantastic and Cotton’s original form and remake control like a dream with either the left stick or the d-pad. Personally, the stick enabled for more precise controls and that’s what I stuck with throughout much of the adventure — but the d-pad is fine; it’s just not going to enable the same degree of precise movement around the screen. It’s tougher to avoid fire with the d-pad, so it’s one way to increase the challenge.

Both the original soundtrack and arranged soundtrack are excellent, with the original OST being more simplistic with its instrumentation — but also being more hummable after a gameplay session. The revamped OST is more robust and is my preferred listening experience, but both are fun to listen to and you can switch between them in the options so there’s no real need to choose one or the other. The sound effects in both versions are action-filled, with more oomph in the remake. Regular blasts are solid, while bomb attacks sound appropriately impactful — and help make mince meat out of bosses at the same time. 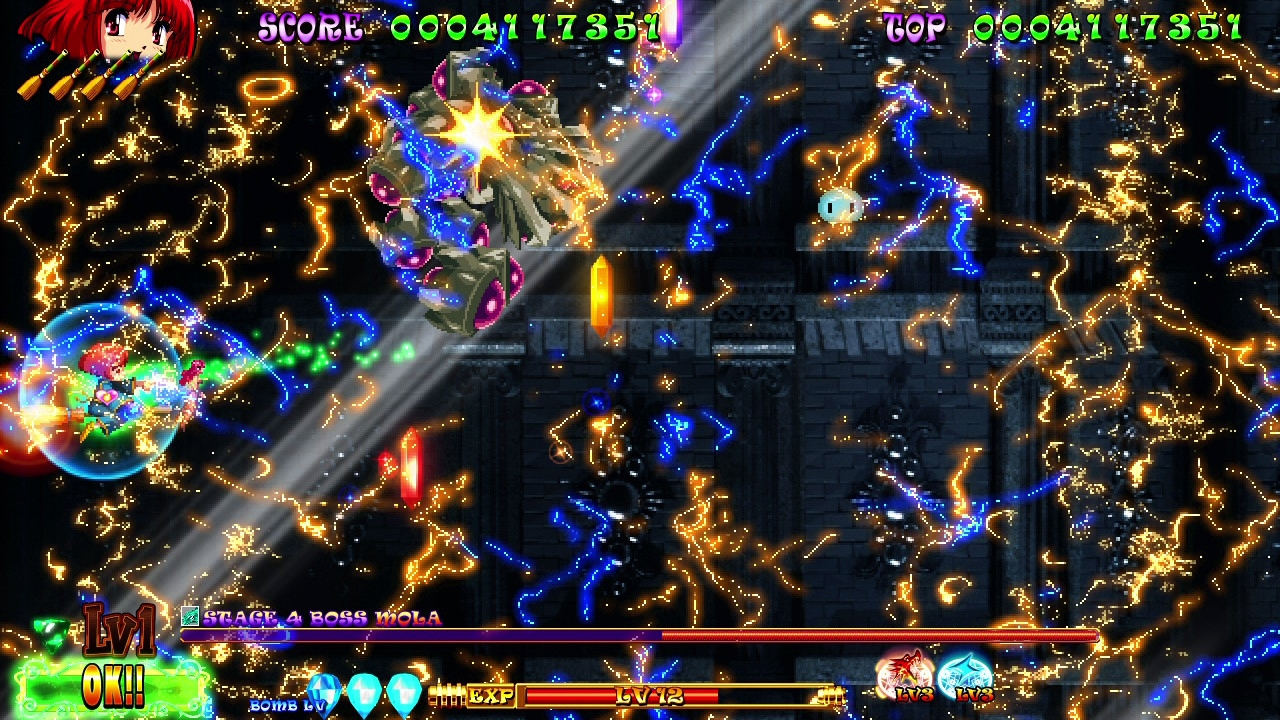 Cotton Reboot! is a fantastic re-imagining of a classic side-scrolling shooter. It looks and sounds better than ever and thanks to being able to switch between soundtracks, players can enjoy whichever audio experience they prefer. Including the original game’s X6800 port is a nice move and makes this a fantastic value for anyone looking to see what made the series so beloved in its heyday and still enjoy a redone experience too. There are a couple of issues with blind spots that haven’t been fully addressed, but the overall forgiving game design makes Cotton Reboot! a fantastic pickup for those who either already love side-scrolling shooters or for those who want to get into them, but just need something that’s more forgiving to fully enjoy the genre.