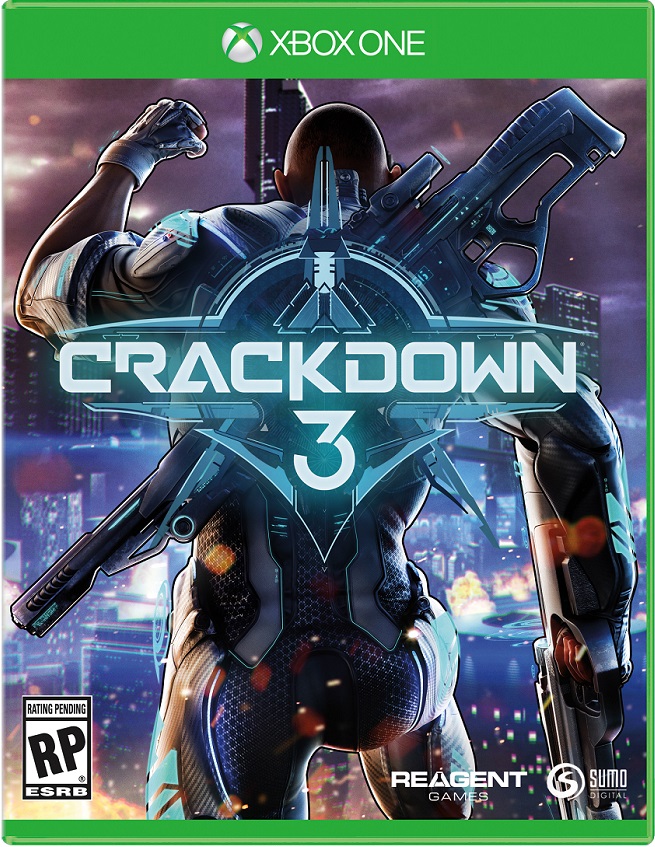 Crackdown burst onto the scene in 2007 as a vehicle to deliver the Halo 3 beta. The promotion not only sold millions of copies, but also helped establish Crackdown as a popular Xbox 360 exclusive. It’s a high the series has yet to replicate with Crackdown 2 considered a significant disappointment. Now, after numerous delays and a vastly different vision from its 2013 reveal, the series is back with Crackdown 3. Developed by Sumo Digital, Crackdown 3 hopes to reignite the passion for the series by delivering a fun open-world adventure. After numerous delays, however, can Crackdown 3 do the Agency proud or should it be forced into early retirement?

Crackdown 3 takes place a decade after Crackdown 2. A terrorist attack from the city of New Providence kills power around the world, and the Agency is sent in to investigate. Ambushed by the mysterious group Terra Nova, the majority of agents are killed-in-action. One, however, is resurrected by Echo, leader of the Militia rebel group, and is recruited to help defeat Terra Nova. Working together, both the Agency and Militia plan to dismantle Terra Nova’s hold on the island nation.

Like the previous Crackdown games, Crackdown 3’s story is a complete afterthought. If you’re looking for a deep, introspective tale, then you’re barking up the wrong tree. Villains are entirely underdeveloped, exposition is rattled off quickly by Echo and the head of the Agency, and outside of an intro cutscene, your Agent has very little to say. Overall, there’s not much story to dive into. The plot merely serves as a device to get players into the action. In that sense, it serves its purpose. There are baddies to pursue, an ultimate villain to beat and a whole lot of exposition dumps from Echo. Still, it would have been nice to get more context into the world and its characters. The story provides little motivation to press on, and by the time the credits roll, it’s likely you’ll have no idea what just happened. It’s not the plot players want to play Crackdown 3 for, though. Instead, it’s the zany, over-the-top action that drew players to the franchise in the first place and it’s the basket Sumo Digital placed all their eggs in. Crackdown 3’s gameplay and design skew heavily towards the first game, which is both good and bad at the same time. 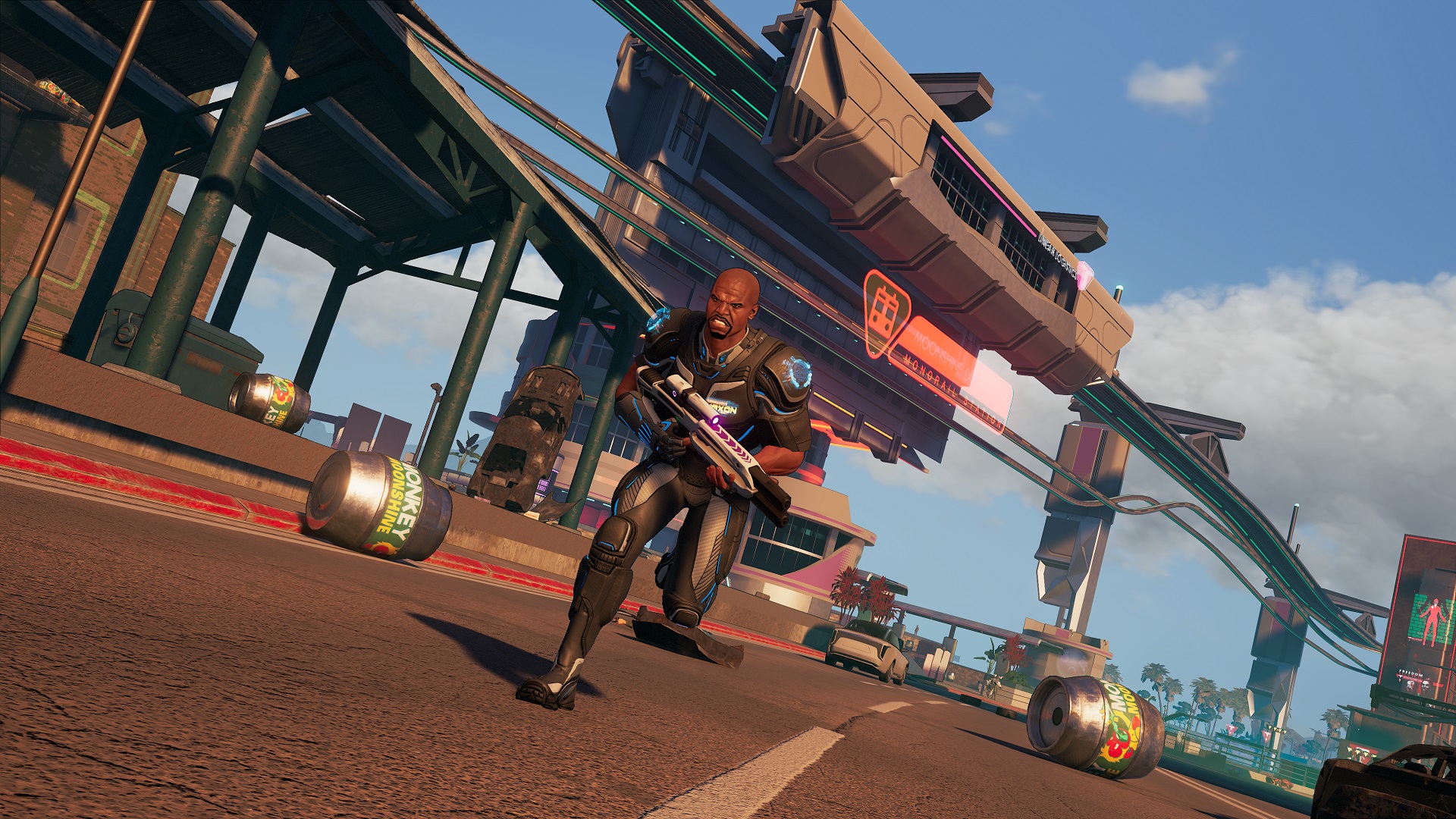 New Providence serves as the playground for mayhem. A circular island, the nation provides plenty of variety within its locations. There’s coastal areas, shanty towns, marinas, neighborhoods, deserts and towering skyscrapers. Scattered throughout the different regions are activities that, once completed, unlock bosses. These activities range from destroying chemical plants, blowing up Terra Nova vehicles, taking control of monorail stations and climbing towers. There’s plenty of these activities to participate in as you explore the world, but they quickly become derivative as the objectives never change. Chemical plants require you to destroy pressure monitors to reveal and destroy the main valve. Monorail stations task you with destroying a set number of guards before a station master appears. The different activities feel like copy-and-paste jobs, and considering this is what you’ll be doing the entire game, it gets dull real fast. The environment packs plenty of variety, which the missions really needed.

Sumo Digital makes getting into Crackdown 3 a breeze for fans of the previous games. The game uses the same gameplay mechanics and almost feels like a remaster or a remake of the original game. Holding down LT locks onto the nearest enemy with the right stick switching what body parts the Agent aims. There’s also melee and a jetpack for extra jumps and boosters to air dash. Gunplay in Crackdown 3 is bolstered thanks to fun and interesting weapons. You’ll start with your basic pistols, assault rifles and shotguns, but quickly you’ll amass an arsenal of deadly weapons. There’s a pulse beam that melts through shields and lights enemies on fire, a Mulcher that spews out a deadly beam of acid and a Vortex Cannon that sucks up all nearby enemies before detonating. Crackdown 3 packs in a lot of crazy weaponry that easily allows players to create their own mayhem, which is good because the enemy AI isn’t challenging. They never present much of a threat and mostly serve as fodder for your overpowered abilities and weapons. Even the bosses don’t put up much of a fight. As a result, the game loses steam the longer you play. 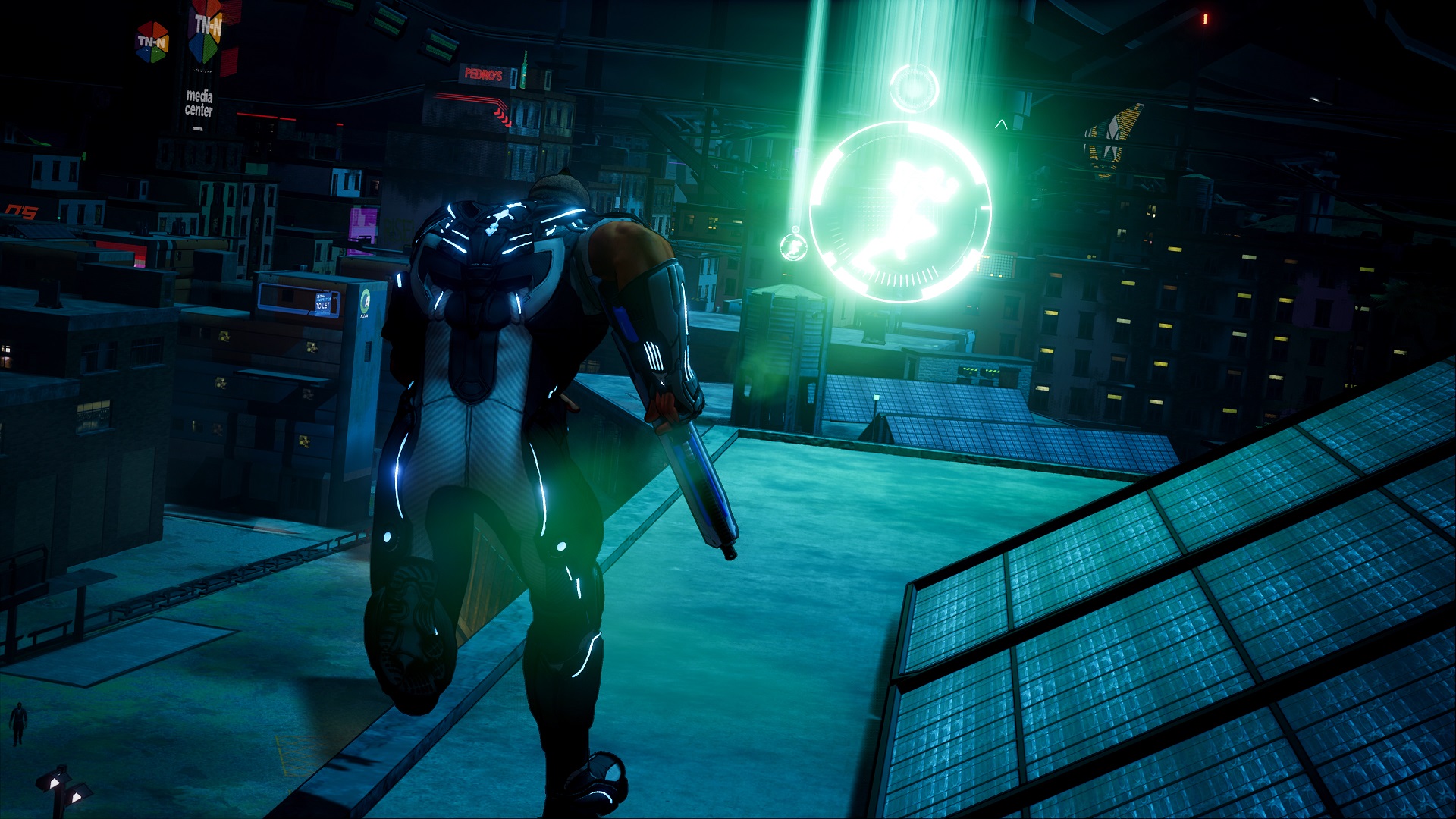 All that mayhem is then used to upgrade your Agent. The ‘Skills for Kills’ upgrade system returns and serves as a satisfactory way to level up. Everything you do in Crackdown 3 builds up one of five meters: Agility, Firearms, Strength, Explosives and Driving. Leveling up each meter unlocks new abilities, weapons and equipment that make getting around New Providence and dispatching enemies easier. The Agility meter is unique in that it can only be leveled up by collecting Agility Orbs hidden throughout the city. Like the previous games, there are over a thousand of these neon green orbs that unlock abilities like air dash and double jump.

Crackdown 3 can provide lots of fun, but it’s held back by dated mechanics. The lock on is imprecise and it’s common to find yourself locked onto the wrong enemy. Mission repetition and enemy difficulty make the late game feel more like a chore than a fun, super-powered experience. Meanwhile, the number of orbs to collect throughout the game can be downright annoying. It isn’t so bad in the earlier locations as they’re relatively flat, but once you get to the skyscraper areas, it becomes difficult to keep track of where you found the orbs and where you haven’t looked yet. 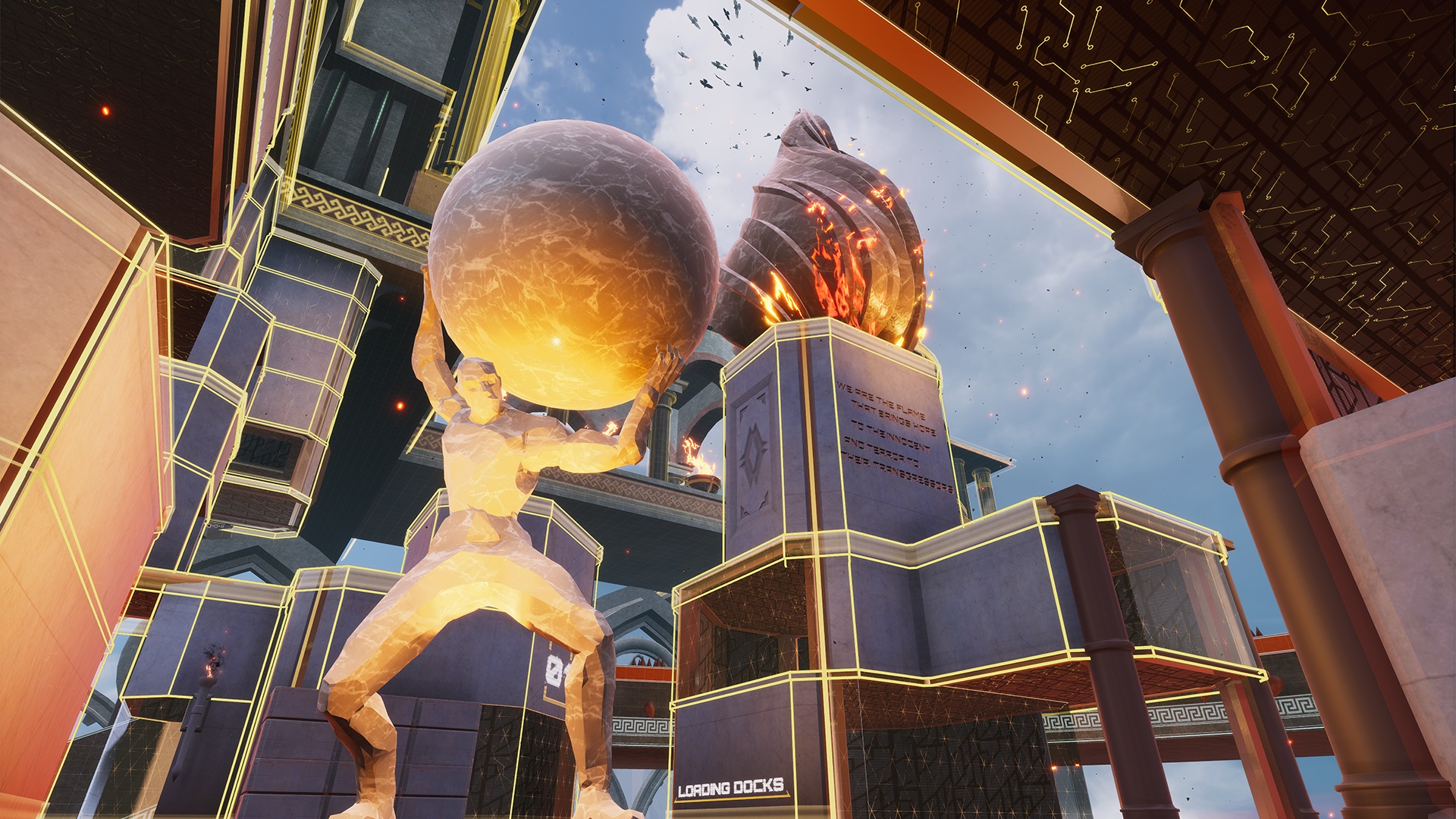 Wrecking Zone, however, is a different story. Crackdown 3’s multiplayer suite is filled with fascinating ideas that lead to rewarding gameplay. Unlike the campaign, multiplayer fully integrates destruction mechanics allowing players to procedurally destroy each of the three maps. The multiplayer’s movement feels snappy and it’s exhilarating to know that no place on the map is safe to hide behind. The destruction encourages players to move and experiment as they seek new avenues to take down enemies and capture territory.

At launch, Wrecking Zone comes with three maps and two modes, Agent Hunt and Territories. Agent Hunt tasks players with defeating enemies and collecting their emblems. Meanwhile, Territories has each team attempt to control objectives throughout the map and accumulate points. Both modes are fun, but Wrecking Zone suffers from a lack of content. Three maps and two modes is too little, and the mode is missing basic features like an invite system or character customization outside of picking your Agent. Wrecking Zone remains fun, but there’s just not a lot of meat to it at the moment. 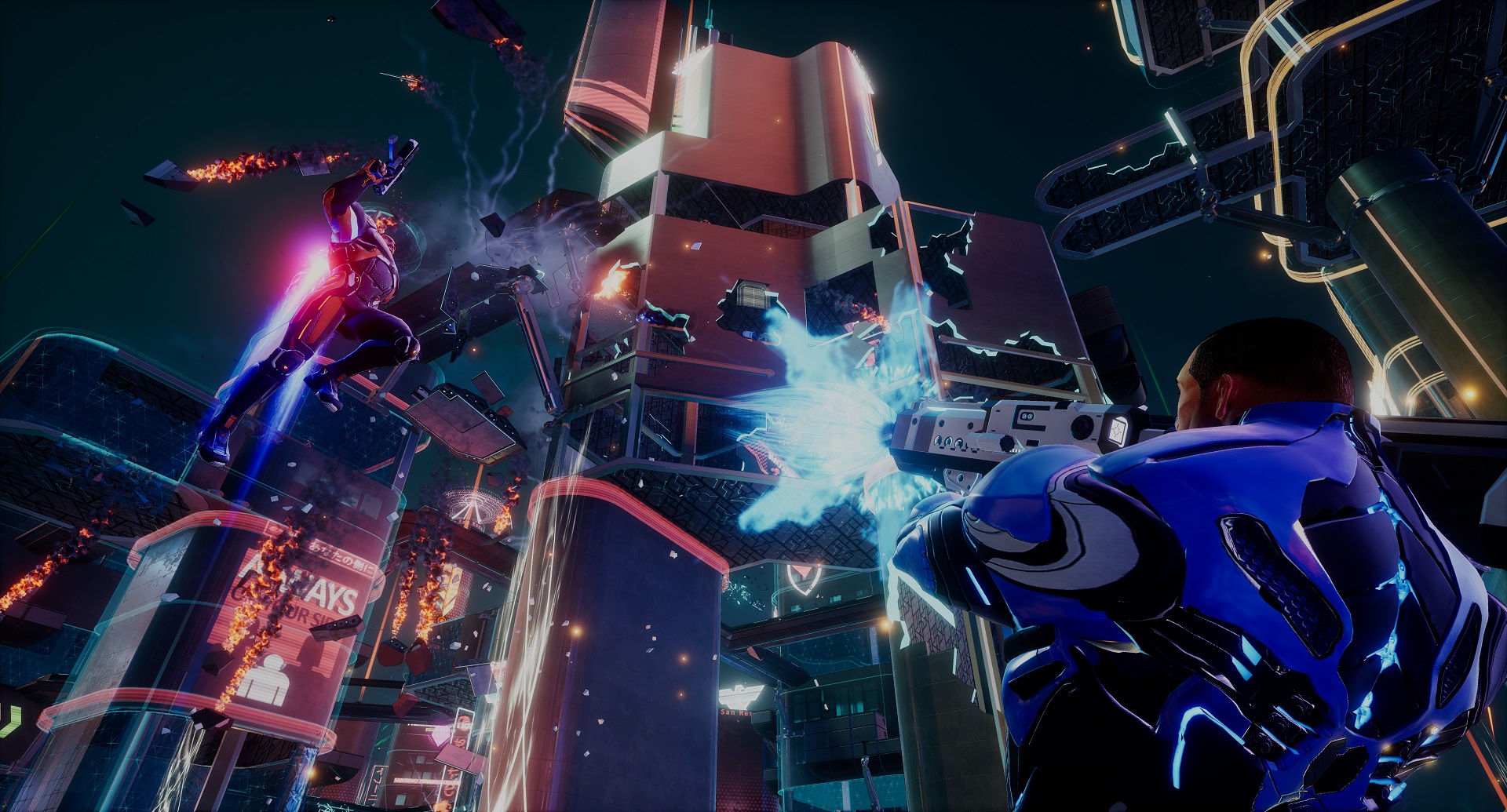 Much hoopla has been made about Crackdown 3’s visuals, which is justified and unfair at the same time. No, the game does not look like a AAA production from a console manufacturer. Textures aren’t very detailed, buildings lack unique characteristics and the world feels remarkably empty. Crackdown 3’s presentation, however, has a lot going for it thanks to incredible draw distances. The game looks good when the sun goes down and the neon colors are given time to shine. More impressive are the large number of explosions and effects that regularly go off. Whether it’s from your own launcher, a grenade or some enemy blowing up, the screen is always filled with something exciting. It also helps that despite all this chaos, Crackdown 3’s framerate never becomes a serious issue.

Terry Crews may get top billing in Crackdown 3, but he’s woefully underutilized. Outside of the opening cutscene and a few quips here and there, Crews barely has anything to do in the game. Instead, the majority of the voice acting is done by Echo (Ulka Simone Mohanty) and the head of the Agency (Michael McConnohie), who both do a fine job but quickly become grating with each line they repeat. The voice cast is mostly wasted, but at least the music played during combat is fun and gets the blood pumping. 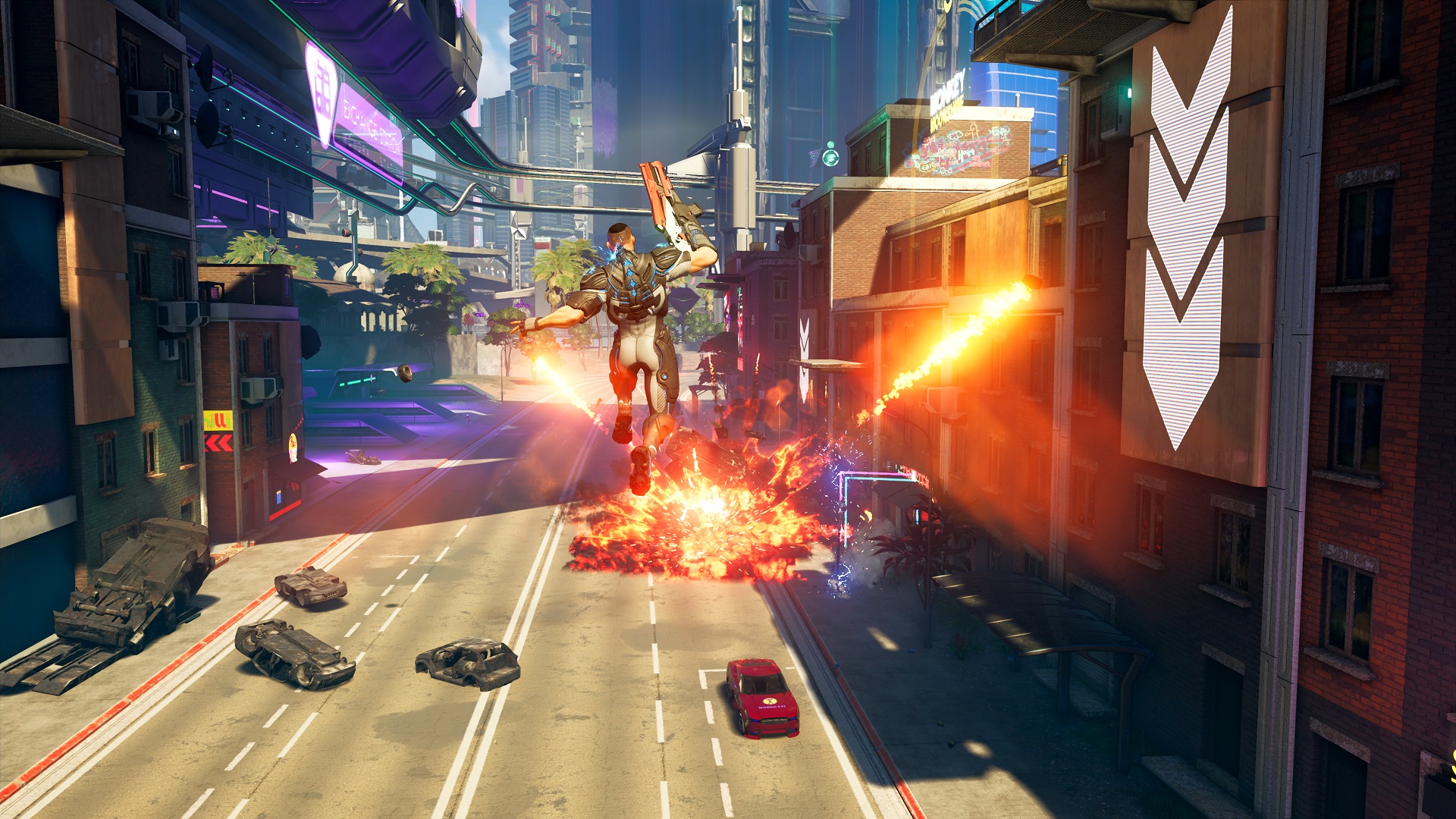 Sumo Digital have finally delivered Crackdown 3 after five years, but it feels like a product of a bygone era. The developer adhered strictly to the formula that made the original so enjoyable. It’s admirable and fans nostalgic for the original are bound to get a kick out of it, but going down this path has resulted in a product that, while fun, feels archaic in its design and gameplay. There are lots of missions to pursue, but the objectives are derivative and become stale the longer you play. New Providence is a giant open world, yet feels so empty to run around in. Gameplay and weapons are a real joy and give players the tools to create their own mayhem, but the lack of challenge dulls some of that fun. The game isn’t the visual masterpiece one would expect from a AAA production, but it isn’t without its charm. It’s with Wrecking Zone that Sumo Digital stretches their wings thanks to the chaos of destructible environments, but the glaring lack of content and missing features makes it more of a curiosity rather than a fully fleshed out mode. Crackdown 3 is fun to play in bursts and the perfect Game Pass title, but its adherence to the original game’s formula holds it back from achieving greatness.