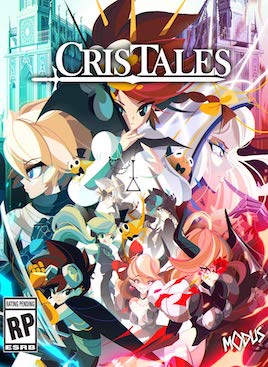 If you’ve been following our ongoing series of previews, first impressions, return visits and even just coverage of new reveals alike, you may have noticed Cris Tales has featured prominently around these parts. Rightly so, we may interject; ever since its reveal to the wider masses at E3 2019, the joint effort from developers SYCK and Dreams Uncorporated is a looker. Its charming, semi-abstract visual style and broad-if-carefully plucked use of color to brim its fantastical, time-manipulating RPG world with life. And if that wasn’t enough, a combat system that suggested a flair of lite puzzle-solving with its signatory time-hopping premise. The thing is, for all the opportunities we’ve gladly received to check in on the game, what we’ve seen of Cris Tales up to this point have not only been compartmentalized instances — moments that focus strongly on the town settlements, sprinkled in with sequences of turn-based combat — but more so, pre-release builds that one assumed were early state examples that would naturally be added to.

Not unlike many a vertical slice of an upcoming title, whatever the genre. Assets, design choices, balancing and the like — understandably absent due to its work-in-progress state, and admittedly, personal hope that such a game could capitalize on its fantastic first impression[s] and visual style alike. Because over the past year-or-so, Cris Tales has succeeded in only building that impression. Not least for a game like this whose RPG leanings and hopes of calling back to the acclaimed, beloved classics, old and modern-day alike. A detail the developers are anything but ashamed to admit to. So yes, nostalgia for the past is a key ingredient in Cris Tales as much the core mechanics of manipulating time are deservedly center-stage too.

And taken on the basis of these specifically-selective moments, the game has all the hallmarks of standing beside the best of the best. The RPGs — of Western and Japanese origin alike — that are masterfully crafted on the basis of gameplay, presentation, characters and soundtrack. If I’m coming across to you as too optimistic and naively-blind with expectation, keep in mind that Cris Tales has been a long-anticipated highlight over the past two years. A highlight whose already-proven aesthetic and intriguing combat set-up should, in theory, easily translate into a satisfying all-round experience. The next great, unmissable RPG of current times. So great it justifies taking an admittedly-longer time to transcribe one’s thoughts into words (other curious JRPGs to cover alongside notwithstanding). Coming away from main protagonist Crisbell’s time-hopping adventure, that optimism has sadly been dented a touch. Maybe not to the point it’s completely broken, but the fact of the matter is that Cris Tales doesn’t find the ways and means to keep the overall journey as fulfilling or even as enjoyable as those brief, return visits were. 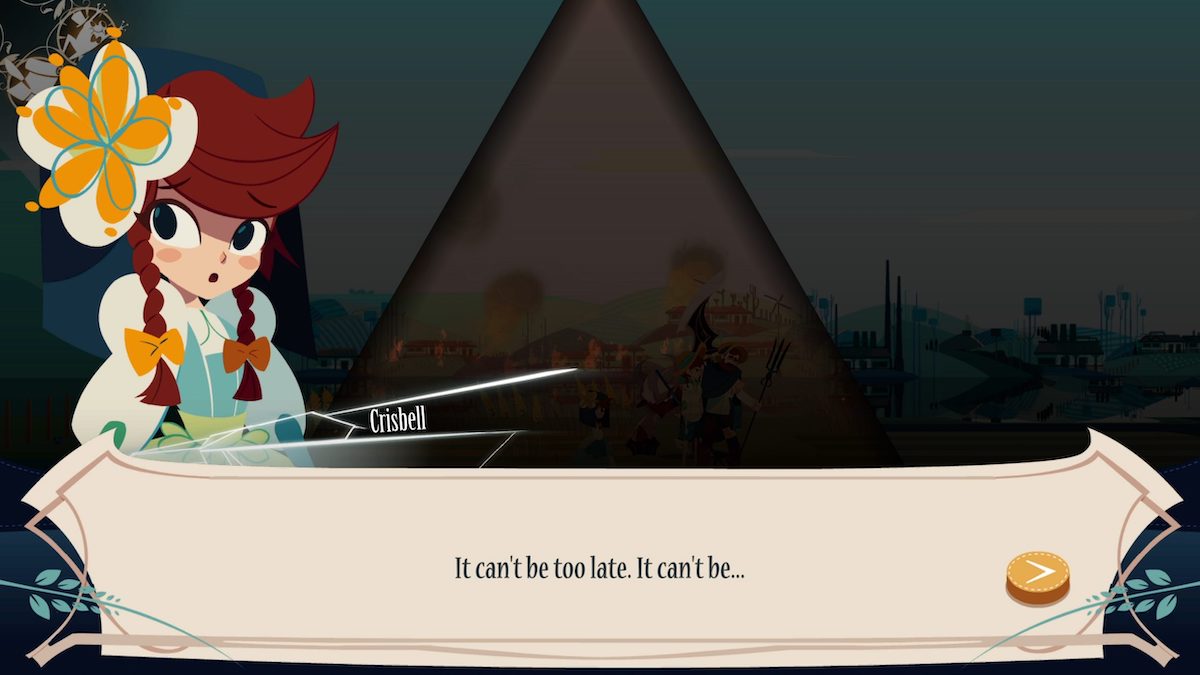 Not just because the overall difficulty curve and challenge professed by the game is weirdly uneven — starting surprisingly challenging, easing off and then throwing up an occasional spike here and there later on. Perhaps the best place to start with Cris Tales‘ critique is that very nostalgia for the yesteryear’s that its initial marketing and clear design is hearkening to. Yes, the nods to the likes of the original Paper Mario and early Final Fantasy games alike are easy to spot, with its linear, narrowly-winding paths and dotted-about hubs to hop between. But Cris Tales sometimes mistakes this nostalgia for old, with the need to ignore all contemporary improvements to the formula. Example: the decision to incorporate random battles and how Cris Tales doesn’t even make the effort to inject one of RPG’s most common traits with a little flair. Or at the very least, a transition to battle that isn’t just an abrupt all-white loading screen. Even a series like Bravely Default — a game that so blatantly called on fans’ love for the NES/SNES-era Final Fantasy entrants — acknowledges that allowing players to increase/decrease enemy probability staves off some of the staleness for random battles.

Even something as simple as a sprint function is nowhere to be found in Cris Tales and so dungeon-crawling becomes exactly that — an artificially-lengthened and unnecessary trudge down ninety-degree turns and linear paths alike. Paths whose blatantly-stretched out routes are devoid of all but the occasional bit of puzzle-solving. Puzzle-solving that, at its worst, is but another excuse to pad out the run-time. The consolation here is that that very slog is at least a visually-arresting one. And for all its shortcomings with needless grind and equally-needless story sequences that drag on for a tad longer than required, Cris Tales holds onto the appeal of its aesthetics. So much so that the frustrations, at best, subside in place of voluntary noticing of the finer details in the splitting of time periods its main hubs are presented in. How the split of past, present and future paints its settings in a mix of desolate and uncertain states alike. 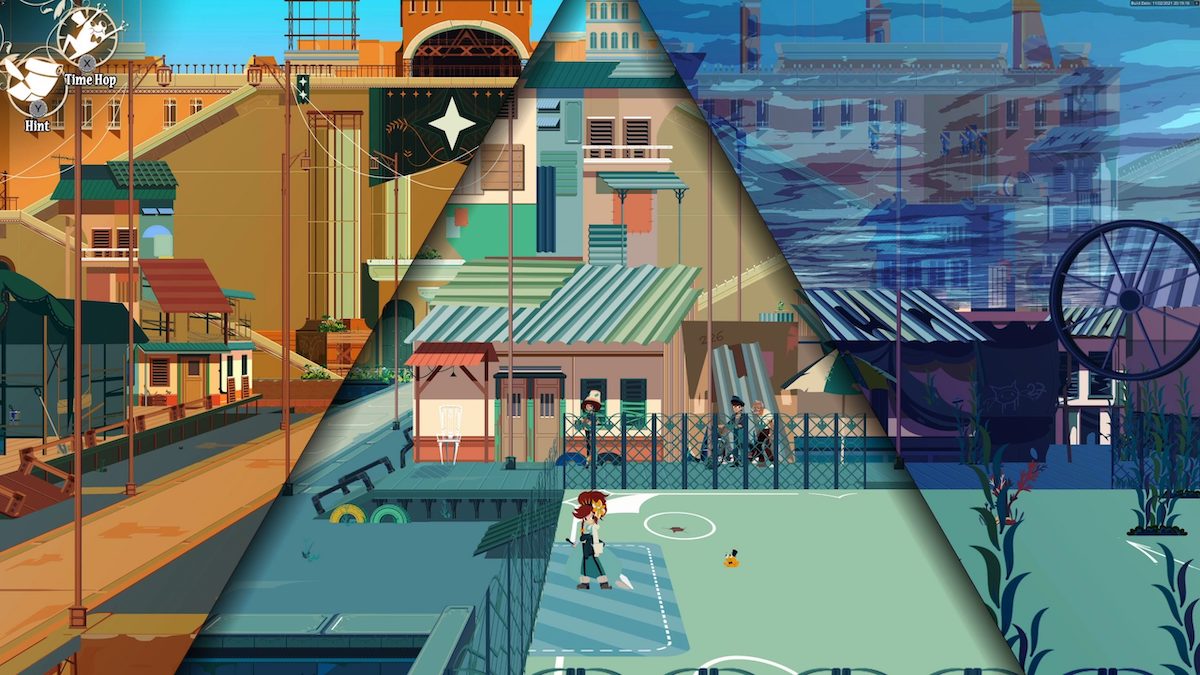 More impressively: how Cris Tales avoids the usual trope of representing the future “bad outcome” as some apocalyptically-desaturated, downtrodden palette. As clear and blatant the game makes sure to paint these future states as one you have to prevent, the palette once again is in service of the artistic strides used for that particular setting. It’s no exaggeration to remark on how Cris Tales — or at the very least its town/settlement locales — is very much “Desktop Wallpaper: The Game” for just how immediately appealing its presentation is. And how easy it is to latch onto the literal slicing the screen into three parts. On seeing the state of nearby NPCs, or even just buildings themselves, in their respective “past” or “future” selves. Even just the way characters profiles are designed during moments of dialogue. The care and attention put into these minuscule moments is greatly appreciated and easily Cris Tales’ brightest and most striking attribute.

But beyond the momentary hidden objective or two so as to prevent a character dying — the solution of which tucked away in an actual boss battle of all things — the means to achieve that coveted “best future” outcome is confined to a series of side quests. Side quests that, unfortunately, devolve one too many times into back-and-forth fetch quests. And given the aforementioned frustrations with simply traversing dungeons and linear routes alike, Cris Tales can feel like it discourages players from investing the time needed to achieve the ideal outcome. It doesn’t help that the result, regardless of how many quests you complete, rarely feels weighty or that it’s serving some grander construct. Beyond an alteration to dialogue thereafter, before it’s off to the next story-pivotal setting and/or stand-alone dilemma. Were it not for the three-way exchange between starting party members Crisbell, Cristopher and Willhelm, the journey posed by Cris Tales may once again have taken a little harder of a knock. Thankfully, while not the most emphatic or complex of set-ups, the interaction between the game’s party is pleasant enough. The writing succeeding at throwing up a comical exchange or two along the way. 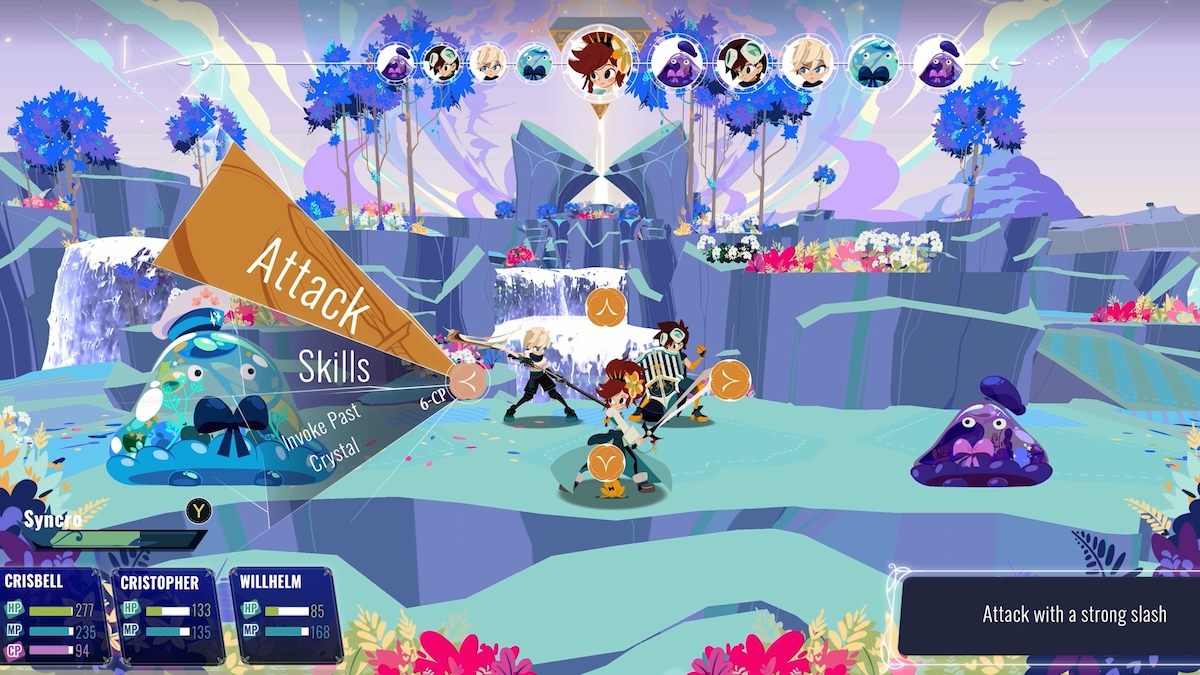 Understandably, the combat of Cris Tales is where much of the appeal and potential staying power is posed. Even if, again, the resulting creation is not without faults of its own. As established, while the format here is once again a turn-based affair — with icons to denote the precise order of characters, protagonists and enemies alike — Crisbell’s time-manipulation abilities are the crux of most of these sequences. Enemies positioned either left or right of the party’s central position, the choice then is to whether or not to hurl foes into their past or future states. Doing so not only altering their appearance, but their stats too…and sometimes not always in a beneficial way. Sure an enemy’s strength may lessen in their past state, but their defense could be greater. It’s an interesting tactical game and thankfully one whose time-centric presence grows over the course of the game. Not only incorporating the act of initiating buffs/traits in a certain time period, but manipulating the very placement of enemies themselves. Morphing the initial RPG pitch of Cris Tales into a surprisingly-engrossing hybrid of tactics and even puzzle-solving alike.

Eventually, as the party grows over the course of the story, a player’s means to better manipulate the field of play grows alongside. Some of these inclusions work, such as K’s management of a heat meter when dealing out attacks — not to mention his ability to swap which side of the screen enemies are positioned in. But others like Zas’ bizarre reliance on blind luck to dole out valuable magic attacks again only succeeds at discouraging players from involving themselves with such unnecessarily risky tactics. It also doesn’t help that the latter’s introduction comes at the point where two party members are temporarily but forcibly absent. And in so far as curving the difficulty, it’s easily one of the most notoriously-frustrating parts in that regard. 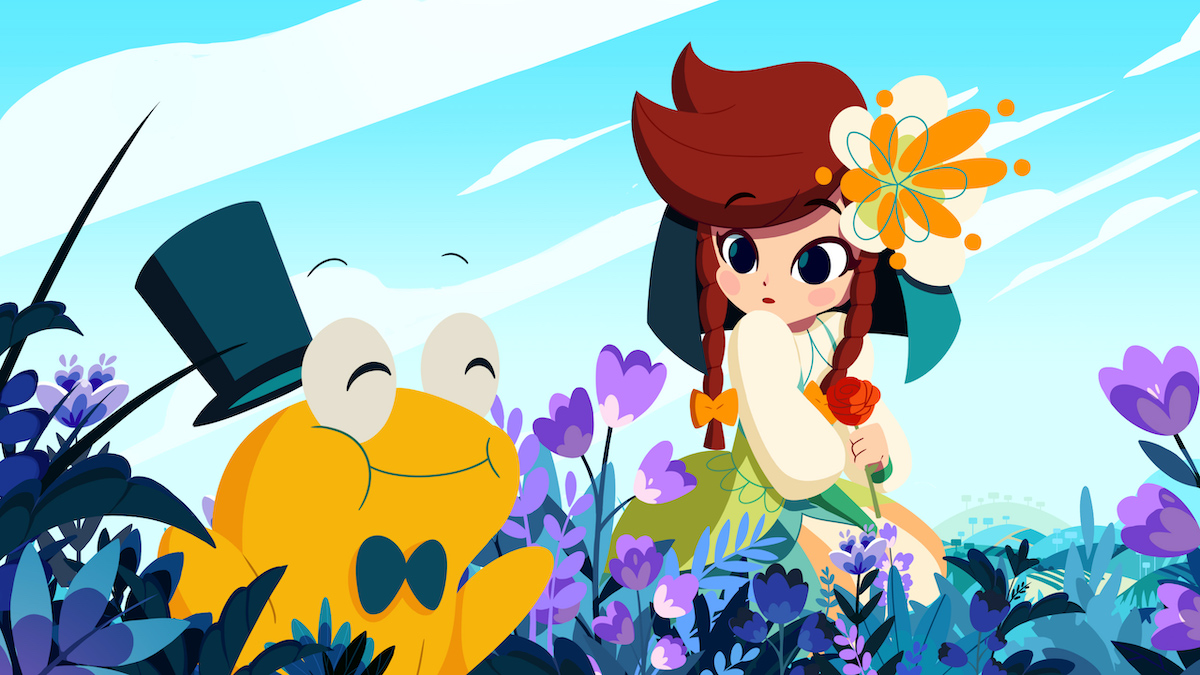 For a game so favorably-regarded and closely-monitored in its build-up to release, it’s hard to shake off the minor disappointment and frustrations that Cris Tales generates in its final form. As attractive and thankfully successful its visual style and aesthetic has remained over the course of its total run-time. Both the design and presentation of its world, its setting and even its character design alike, bringing a genuine flair that allows the game to stand out in that regard. But the lack of similarly-lofty ambition and care with its general journey — as well as some occasional annoyances with its combat — do eventually drain some of the deserved joy out of one’s experience. Whether that’s a misgiving of its nostalgic reminiscing is at the end of the day neither here nor there. The journey itself Crisbell and co take doesn’t hit the highs the striking aesthetic conjures, but Cris Tales delivers on a satisfying-if-uneven twist to turn-based RPG affairs.