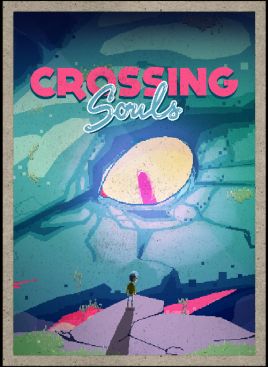 Hey, did any of you happen to know that nostalgia for the 1980s is a thing? Especially among video games and indie titles? I know, I was shocked to learn about it too, everyone was just so subtle about it! Sarcasm aside, one shouldn’t say no to a good ode to the 1980s as long as its crafted well, especially when using the decade as the backdrop for a retro video game. And Spanish developers Fourattic have teamed up with Devolver Digital to try and deliver the best ode they can to those neon-filled times with Crossing Souls, an action game inspired by the films the team adored. But will such adoration be able to mix with stellar gameplay to create something on par with E.T. or will this end up being more of a Mac and Me instead?

Set in the small town of Tahunga, California in 1986, the story centers around five kids as they make an astonishing discovery after a freak electrical storm: a dead body clutching a mysterious artifact, soon discovered to be the Duat Stone, which allows users to view interact with the afterlife and the ghosts inhabiting it. Unfortunately, a mysterious organization is hell bent on retrieving the stone, planning to use it to unleash something only known as the One Day War. And after a particularly intense interaction with the stone, our plucky young protagonists suddenly find themselves on a journey to set things right and eventually save the whole town from being crushed by the diabolical Major Oh Rus.

As you may have garnered from the description and setting, Crossing Souls is a nod to classic adventures of the 1980s such as The Goonies and The Monster Squad. You play as the five kids, swapping between them and making use of their unique abilities. Chris is the energetic leader who attacks with a bat that can deflect projectiles and has the ability to climb on certain surfaces, Matt is the über-intelligent nerd who has a ray gun and jet shoes that allow them to cross large gaps, Charlie is the tomboyish girl who wields a jump rope like a whip and can dash and vault across specific areas, Big Joe is the strong one who hits the hardest with his punches and can push and pull large crates, and Chris’ little brother Kevin, the stealthy one with a few unique tricks up their sleeve. 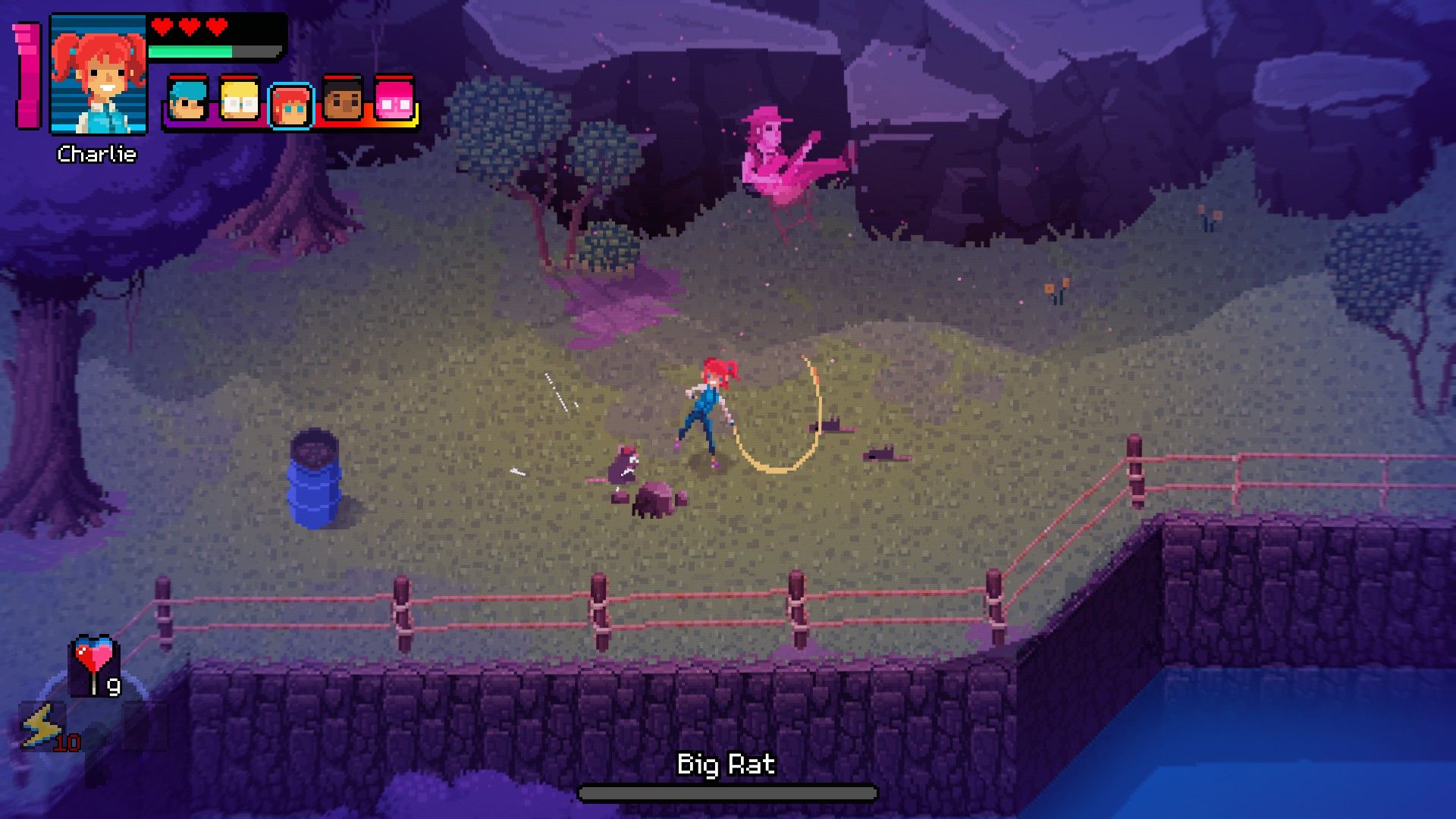 What we have here gameplay-wise, then, is a top-down Zelda-style action/adventure game where you have to swap between the five when it comes to either solving puzzles or choosing how to tackle enemies. Aside from that, things are simple. You have your standard jump and dodge roll moves, some health, bombs, or stun attacks to select from in your inventory, and that’s basically it. But that’s all Crossing Souls really needs, especially when you factor in the character-swapping mechanic and how smooth it is, not to mention how much variety it adds. This is especially true when it comes to one of the game’s stellar boss battles, the best of which nicely feature puzzle elements that test how well you handle each kid.

The simple yet fun combat is easily backed up not just by some nice puzzle design as well, but also the Duat Stone. Once you have the ability to swap between viewing the dead at the push of a button, a lot of interesting moments and bits of gameplay show up. The majority of enemies are viewed this way, meaning you have to be ready to switch to it when needed, and that’s not getting into what abilities it gives you later on. More importantly, it populates the game’s world with even more NPCs, some of which you can interact with, or even just those that provide cute sight gags (like two dueling bandits on the roofs of opposing suburban houses). 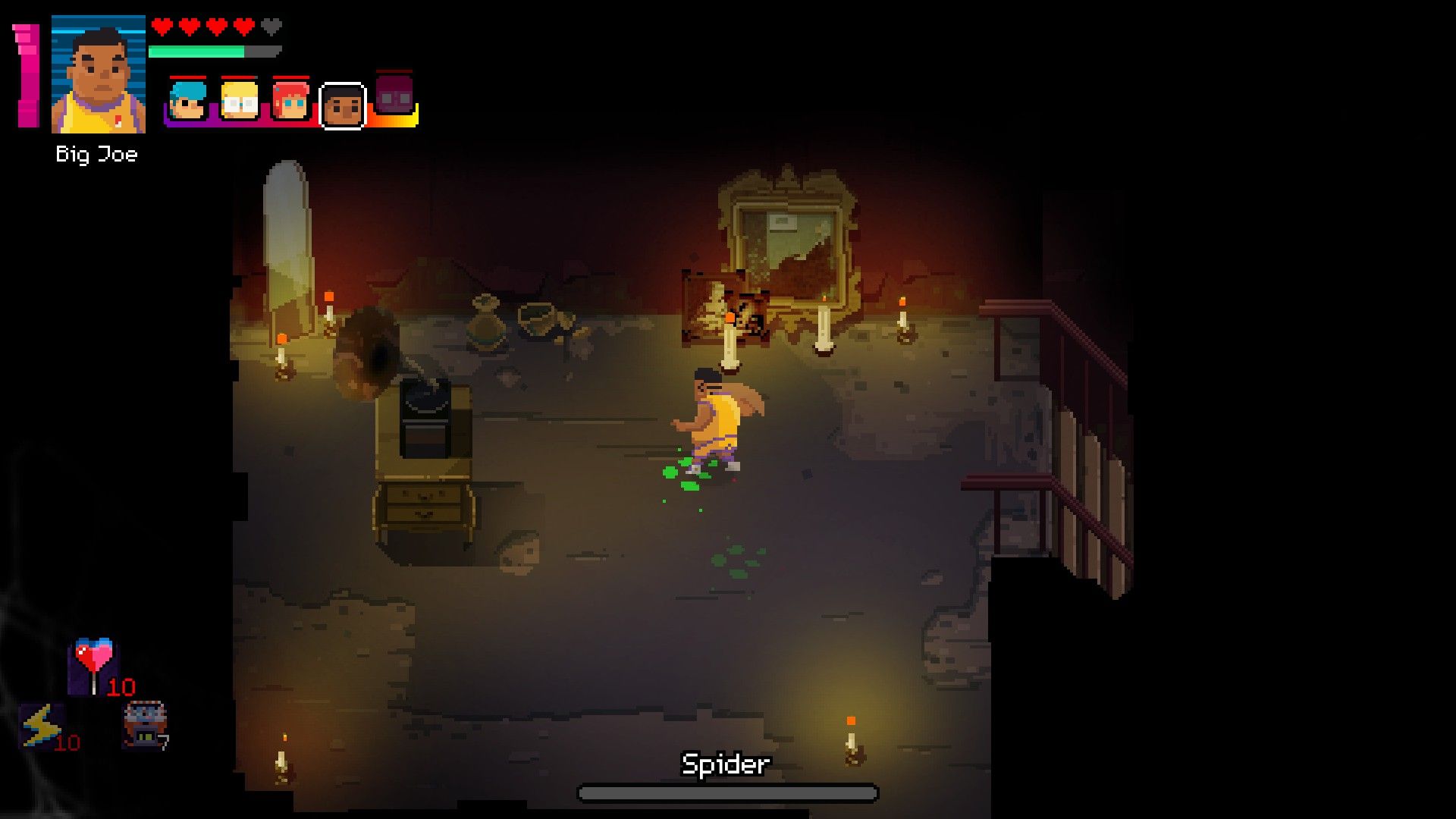 Indeed, Crossing Souls also happens to have a great sense of humor as well. As expected, there are a ton of references to pop culture from the decade (including collectable films, games, and cassettes) and nods to other indie games as well, but thankfully, the game keeps a lot of this limited to Easter eggs to either hunt for or interact with, lest they become too obnoxious. The kids are also a hoot as well, especially in how there are several different reactions each individual one has upon examining certain items. And all of this is presented with some incredible pixel art with nice, fluid animation, with the VHS-style animated cutscenes being a nice touch. And unsurprisingly, the music is terrific, matching the mood of the era perfectly.

But while you may get the impression that this is going to be a bright and cheerful romp through your childhood…yeah, it won’t be. Heck, Crossing Souls feels like a darker take on the zany adventures you loved, especially when it gets into the enigmatic world and figures behind the Duat Stone. It almost feels like a deconstruction of those wacky supernatural adventures at times, delivering some rather emotional moments. Still, it manages to keep a perfect balance between those moments and the more light-hearted stuff, creating that perfect blend of homage and a unique twist on the genre. Indeed, your jaw many drop at times or tears could potentially come given where this story can go. 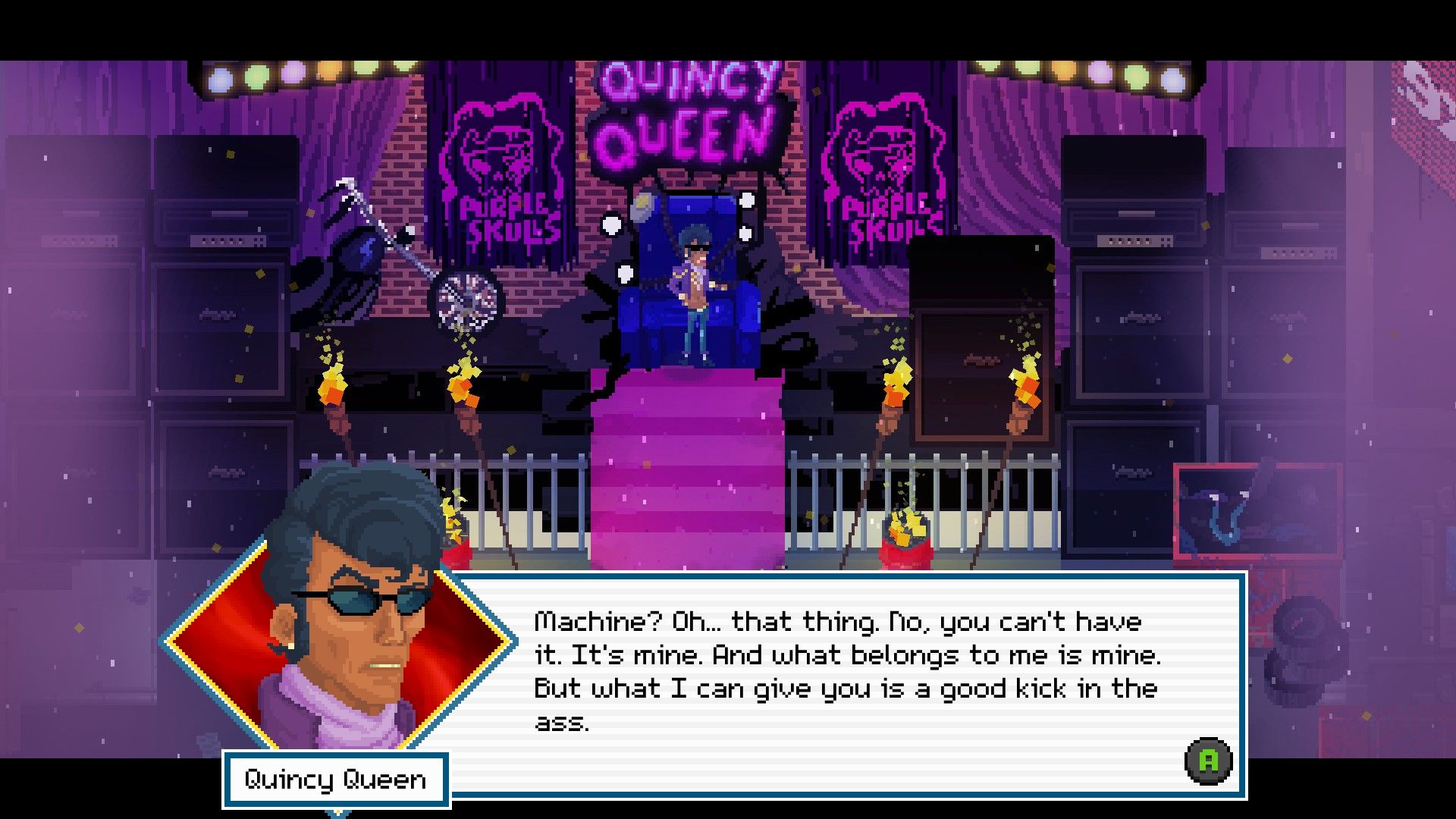 That being said, while the story is the highlight of Crossing Souls, the narrative isn’t without a few flaws. One part that needs to be singled out is a particular bit of insanity in a moment two thirds of way in. In what may be mild spoiler territory, a particular obstacle blocks the path for our heroes, and how do they exactly get past it? A character from a different indie game shows up with a friggin’ time machine (and do I really need to say what said machine is modeled after, given the setting?), and offers to take you back and prevent the obstacle from ever appearing in the first place. And this isn’t just a simple cut scene, it involves an entire quest that takes at least a good half hour to solve. Then once you get past it, you’re told the machine doesn’t work anymore, and none of this is never mentioned again, never tying directly into the plot at all, and thus coming across as a massive big-lipped alligator moment. To say I was dumbfounded by that portion would be an understatement.

There are also more than a few wasted characters as well. In particular, a few notable adversaries show up early in the game, but never appear or are even mentioned of again after their boss encounters. The same could actually be said for more than a few of the townspeople who have unlockable profiles, actually. There are a lot of humorous people in the game with their moments to shine, but they end up being quite brief. 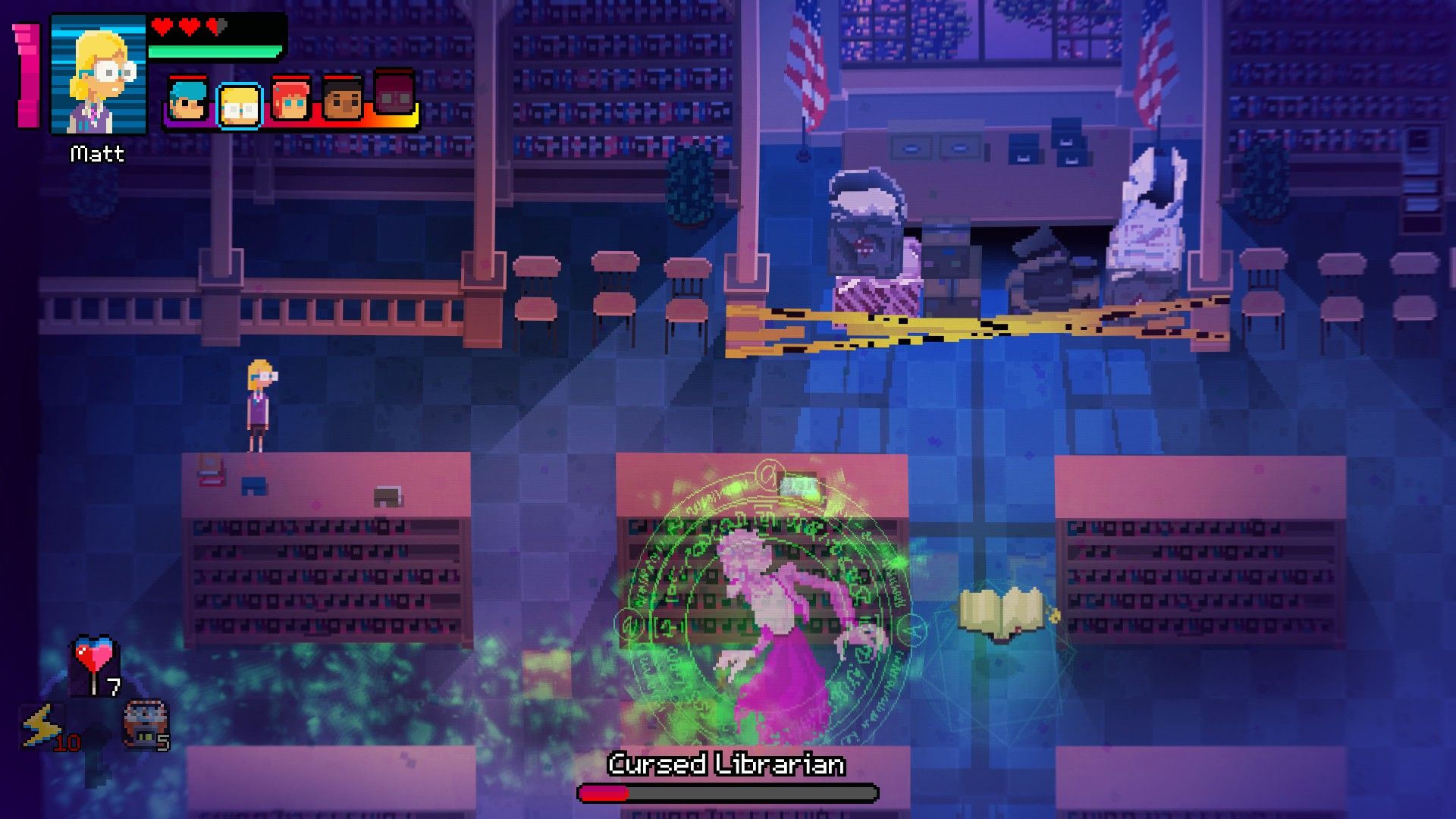 In fact, not unlike more than a few other indie title or Kickstarter-funded games, there is that nagging feeling that there was possibly meant to be a lot more to Crossing Souls. For one, if you’ve played the demo for the game, you’ll know that you spend a lot of time exploring Tahunga, checking every nook and cranny and interacting with as much as you can, be it items to examine or people to talk to. But if you thought the entire game would be like this with Tahunga acting as a hub of sorts that you can get quests from, well, sorry to burst your bubble, but after the demo ends, the game is pretty much fully linear from that point onward. And there actually are a few minor quests in beginning, so may get a false reading on what the tone for the rest of the game would be.

Of course, there’s nothing wrong with a linear game (although if you’re also going to have collectibles in such a game, it would be preferred to allow players to at least have a chapter select or such in order to go back and get them), it’s just that Crossing Souls feels structured in such a way that there are a few parts or ideas you wish were expanded upon more. For another example, without trying to give anything away again, the Duat Stone basically gains a second ability that opens up a whole new set of possibilities…but then that ability is taken away shortly after once you enter the final portion of the game. Speaking of which, said part of the game is a bit of a chore, offering little variety to boot. 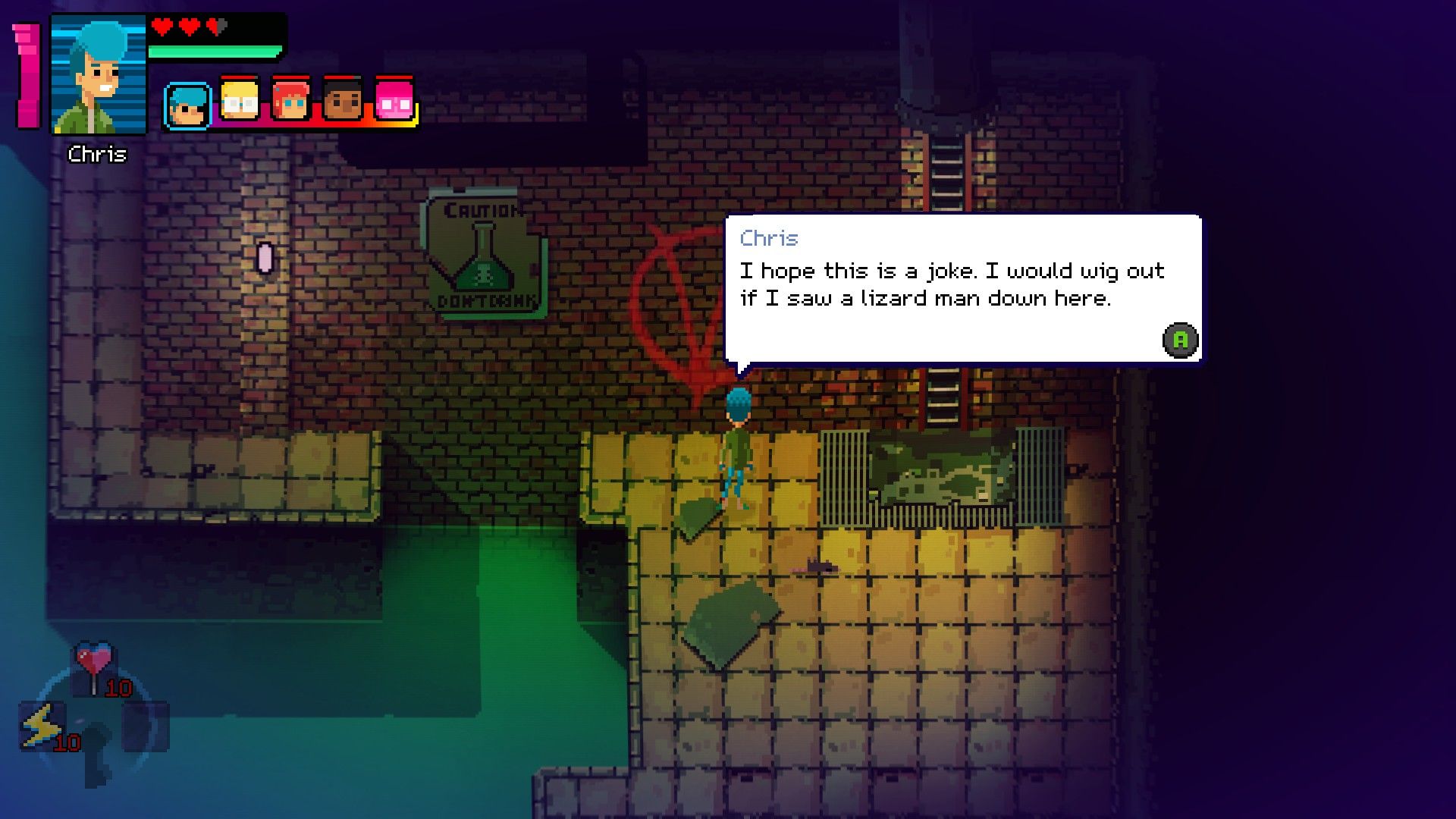 While it may leave you wanting more in certain areas, Crossing Souls is still an excellent action game with a terrific, gripping story you’ll want to see to the very end. This little chunk of the 1980s is filled with terrific, nicely-detailed visuals, fun character-switching gameplay, and a unique vision of the afterlife with several impressive touches. In the end, to call back to the comparisons in the beginning, it may end up being a bit more among the likes of Labyrinth: a flawed but lovable classic you won’t be forgetting anytime soon and definitely worth checking out.