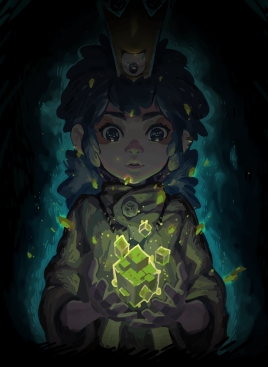 After so many roguelikes and dungeon crawlers, especially when it comes to indie titles, is it possible to find one that does something different, that brings a wholly new treat to the table in some way or another? Also, is it possible to still begin a review with a question like that and not give away the fact that the game is question is doing something different? No, it isn’t possible to begin like that anymore, but I couldn’t think of a proper dream-related opening in time for this game where you battle nightmares, so really, I’m just stalling. Anyhow, this is Crown Trick! It’s a new dungeon crawler from Team17 and NEXT Studios, and it’s looking to do something different. But does it succeed in that area and still make for a fun game? Well, let’s find out!

Crown Trick puts players in the shoes of Elle, a young girl who wakes up to suddenly find themselves trapped in the Nightmare Realm, which is swarming with various monsters. Luckily she happens to stumble across a talking crown, which can assist her in fighting them all off. So now, using the Hall of Reincarnation as a bit of a saferoom, Elle has to fall asleep, enter the Nightmare Realm, and try to fight their way out, tackling tough creatures, rescuing people and getting to the bottom of what’s happening…which seems to naturally suggest the involvement of Elle in one way or another.

Crown Trick is a top-down roguelike dungeon crawler, and as such, I think it’s safe to say that you’re familiar with how the basic formula goes there. Move, slash, cast spells, gather different weapons that work different ways, gather relics that provide passive buffs and try to stack them, battle tough enemies and tougher bosses, die and try to build permanent boosts between runs, stop at certain spots in between levels to refill your health, magic points, and elixirs, etc. So on the surface, not much new there, but it’s the addition of a few different gameplay mechanics that makes Crown Trick unique. 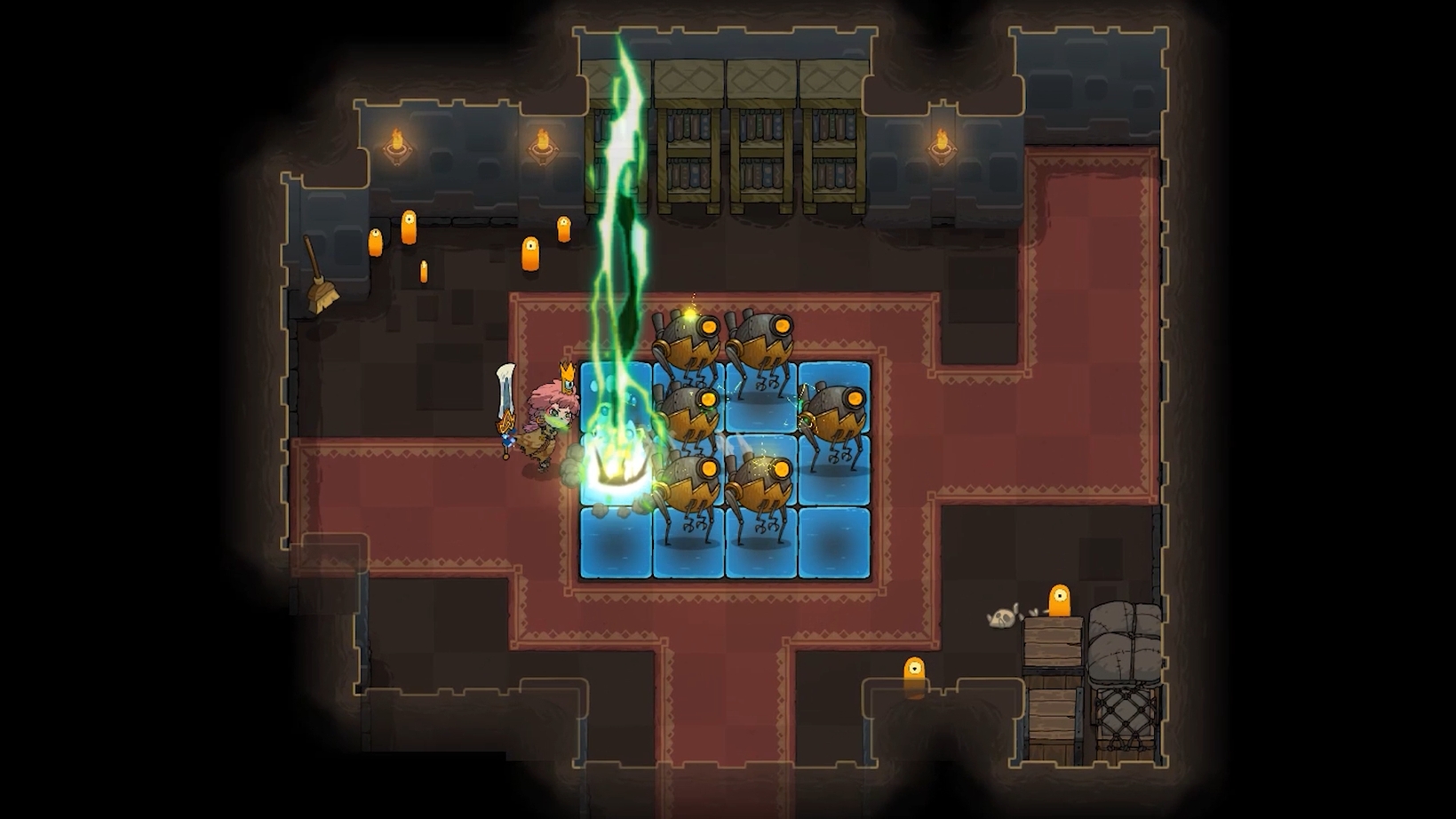 The first thing you need to know is that time works differently in the Nightmare Realm, mainly in that it plays by Superhot rules. That is to say, everything around you only moves when you move. Gameplay takes place entirely on a checkerboard-style grid, so when you move one space, enemies move one space or begin an attack that lights up targeted tiles with how many turns it takes to strike. This goes for hazards around each area as well, from scalding steam vents to tentacles that spin around. So the key here is strategy, trying to figure out the best move and predict your opponent’s strategy. It’s a clever idea and one that makes battles more puzzling yet enjoyable.

Because the possibility of being chased around Benny Hill-style by monsters can get dull, though, Elle happens to have the ability to “blink” away. At the push of a button, a wide range of spaces opens up and the player can instantly teleport to one without having to use up a turn. It is limited, however, which is why the main way to refill it is to perform breaking moves on enemies, meaning now you have to figure out the best way to zip around while replenishing the blink meter, adding another welcome layer of strategy. That said, best to still be prepared for the occasional moments where an enemy is right next to you and the meter is empty, forcing you to just trade blows with them. 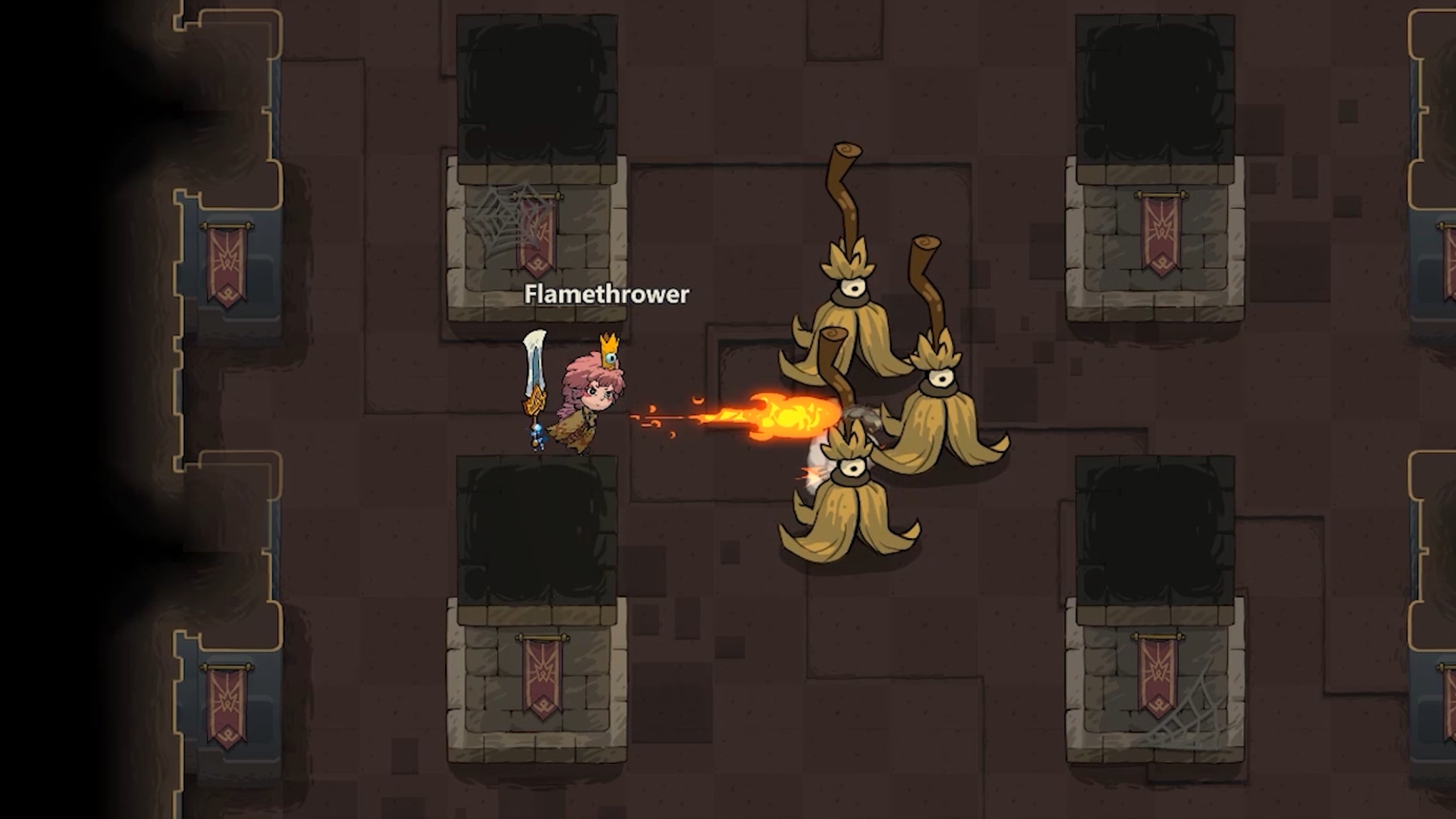 The third notable mechanic Crown Trick has is the addition of familiars. By defeating certain elite enemies that basically act as mini-bosses, you can gain the ability to harness their skills. By interacting with certain crystals in the dungeons, you can equip two different familiars from a random set of up to three that you’ve obtained, and each one grants you a pair of unique skills. One can drop explosive barrels and provide flame breath for a nice combo, another may deal in individual earthquakes for each enemy and a straightforward, powerful strike. It’s a nice twist, especially since it further allows you to mix and match your playing style.

Speaking of attacks like the ones your familiars provide, elements play a big part in Crown Trick as well. There are certain ways such as special attacks and scattered barrels that allow you to coat portions of the area with fire, poison, electricity and more, alongside those created by enemies. And the trick is to figure out how to combine elements for success, like lighting spilled tar on fire or using lighting on water, in addition to seeing how effective they are on enemies affected in certain ways. Simple stuff, but again, it makes the gameplay just a little more deeper, which is welcome.

The Nightmare Realm that plays hosts to all of this is gorgeous as well, by the way. The art style is stunning, hitting the perfect level of cartoonishness, with a colorful yet imposing world. The various familiars you come across also have a lot of nifty designs, from bizarre robot tricksters to evil scarecrows and octopus kings. That goes for the enemies as well, along with weapons, items and their flavor text. And while a good chunk of the plot is mainly told through text via pages that you collect, it’s interesting. The world of Crown Trick has unique gameplay, lots of strategy and a gorgeous universe full of fun characters…so why didn’t I want to spend that much time in it?

It took me a while to realize what the issue was, but I think it’s the fact that Crown Trick can get repetitive at times. For its first several hours, at least, but even when things begin to spice up, it feels like a crawl to get there. The problem may be that a turn-based, strategy-focused approach clashes with the world of the traditional hack-and-slash roguelike. A lot of similar games pride themselves upon being more fast-paced, seeing you whip through hordes of enemies in minutes. But in contrast, Crown Trick’s gameplay means it can take longer to clear a room of even a few enemies. And then there are the elite enemies and bosses, which can eat up a good chunk of time.

It’s hard to properly put it, but it feels like little can happen during an actual run, and the rewards in between feel paltry, making for a huge grind. Expect to engage in the same combat with the same enemies for the longest while (and you will be shocked how much of the in-game encyclopedia can be filled out during these periods). Roguelikes are all about chipping away until the end goal, but it never felt like enough progress was being made. Then again, that could just be my own tastes reacting to something they consider bitter or maybe my play style just isn’t working.

Less objective, though, are certain aspects of the UI. In particular, good luck when you happen to be standing by two objects that require the same button prompt, which can result in confusion. Or if you accidentally exit the familiar screen, but can’t access it again unless you move a space to the side. The same goes with chests and like at times. It sounds like a small issue, but it will happen a lot. There are also a few other minor beefs I have as well, such as how rifles are easily the most unsatisfying weapon, but the slow-paced gameplay loop is what knocks Crown Trick down a peg, as solid as the rest of it is. 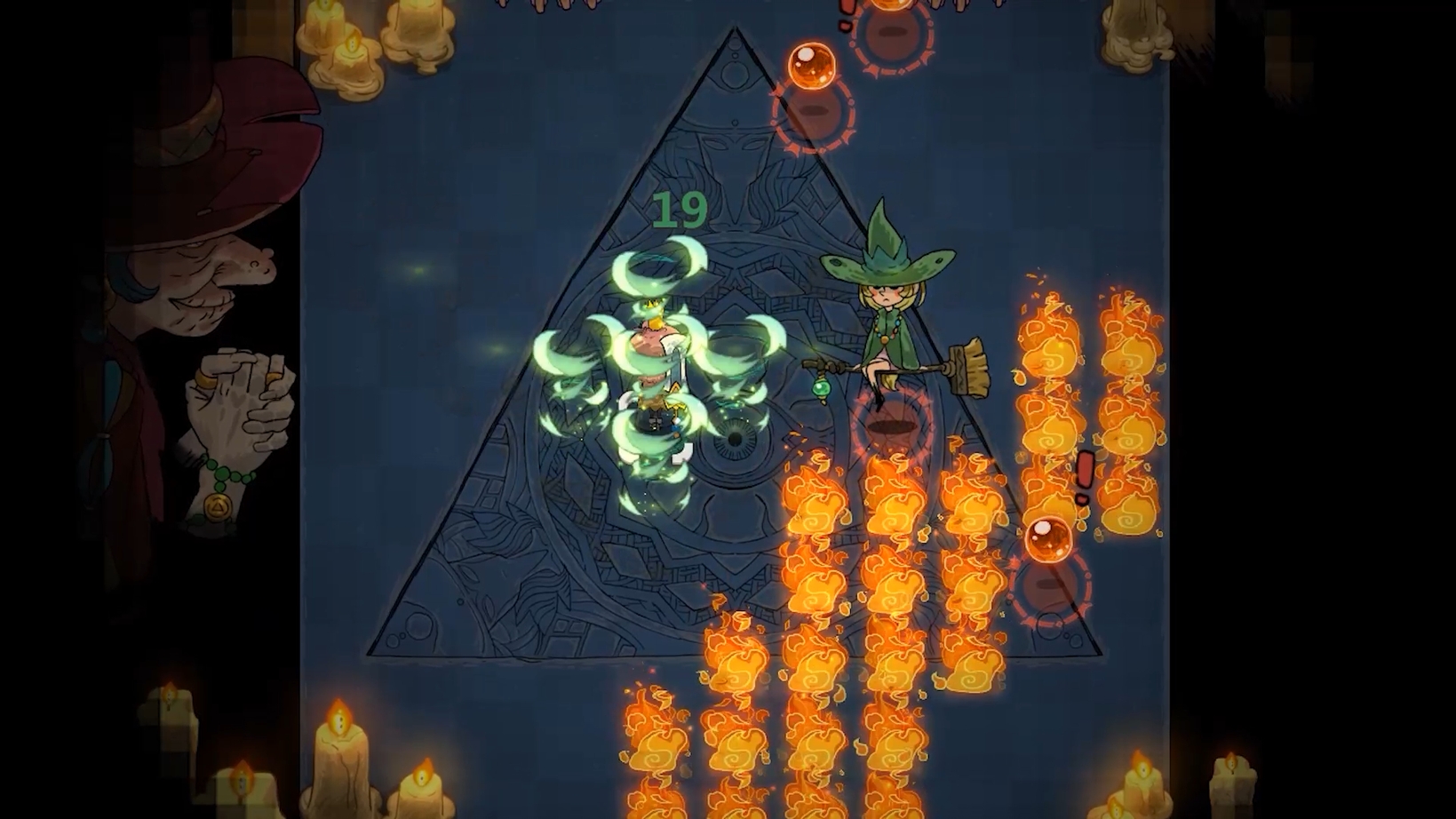 While you may have to be prepared for a slow start and a grind, there’s fun to be found in Crown Trick, thanks to its unique turn-based take on roguelike dungeon crawlers, its enjoyable and deep mechanics, and the vibrant world of the Nightmare Realm. Whether you’re a patient player, a strategy buff or just someone looking for something different, NEXT Studios have something for you that might not be an absolute dream, but will be an interesting little fantasy.