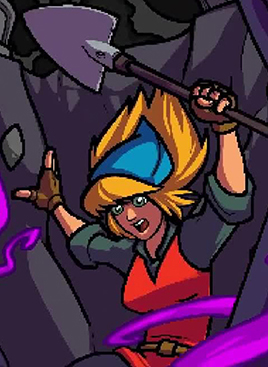 Crypt of the NecroDancer

How can you dance like nobody’s watching when there’s an entire dungeon-full of monsters tracking your ever move? Crypt of the NecroDancer features a heroine who must navigate her way through the legions of undead minions populating the randomly-generated halls and corridors of a necromancer’s underworld domain, and her dance partner isn’t actually the monsters, but rather the dungeon itself. If she can keep to the beat of the music and match her movements to the predictable (but tricky) undead hordes then maybe she can survive. If not, she gets to be dead. Again.

Not that Cadence knows she’s dead. The very first thing that happens in Crypt of the NecroDancer, aside from the title screen, is the revelation that Cadence bit off far more than she could chew when she went digging (literally, with a shovel and everything) for trouble. The ground opens up, she falls down and down and down some more, and that nice cushy rock that cradled her skull didn’t blunt the impact as much as one might have hoped. Cadence couldn’t be much deader, but this is why we have necromancers in the first place. A bit of glowy magical pyrotechnics later and Cadence is alive-ish again, with no memory of her death or necromantic resurrection. Why did the necromancer bring her back to life just so she could tear through his dungeons? He’s probably got his reasons, but finding them out means dancing like there’s no tomorrow.

Your standard NetHack/Rogue game is turn-based, so you can sit and think as much as you like while weighing the consequences of each move in a deeply complicated system. Crypt of the NecroDancer is kind of like that, except much simpler and the turns are made to the tempo of the beat. The full set of buttons in use are up, down, left, and right, and every other action follows from this. That doesn’t make it simple, of course, but rather streamlined, because when you’re trying to predict monster movement ten beats ahead while being pushed along by a driving rhythm it helps if the available options are kept to a reasonable number. 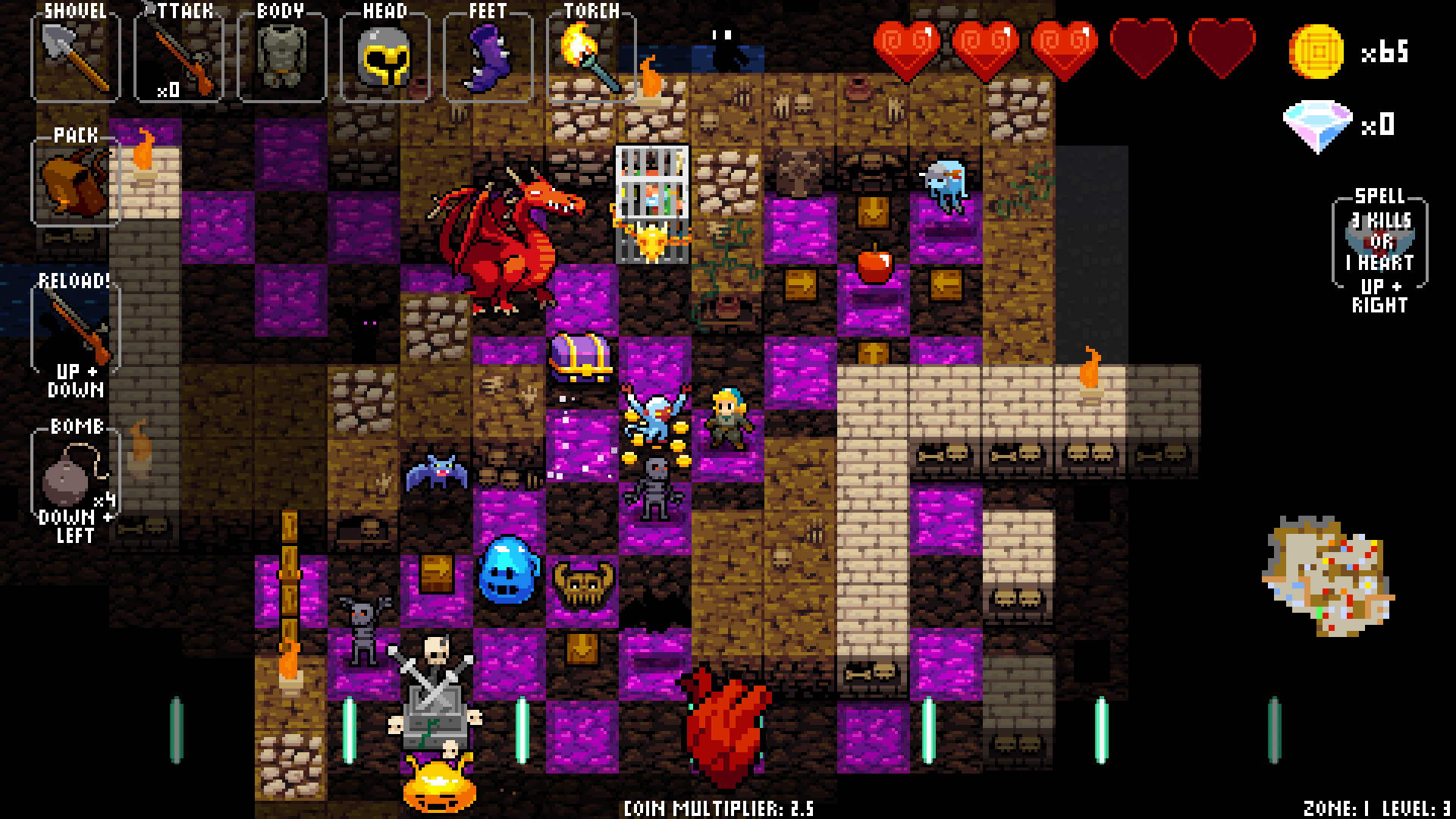 Attacking is simple.  Push towards an enemy to attack an enemy, although different weapons have different attack range.  The starting dagger is just barely functional, seeing as you need to stand on the square next to a monster to hit it, but you can also hit up and down at the same time to prime a throw, and then a directional key to toss the dagger.  While that will leave you open until you chase after the dagger to pick it up again, it’s incredibly useful against enemies whose attack patterns make getting near them tricky.  Functional as the dagger is, though, the bigger weapons are much more fun so upgrading as soon as possible quickly becomes a priority.  The broadsword has a three-block wide sweep, the longsword strikes two squares straight ahead, the rapier does double-damage if the enemy is two squares away and you need to lunge to pierce it, etc.  Surviving with the dagger is possible, but unless you’re the kind of person who enjoys the challenge of beating impossible odds with the weakest possible loadout then literally anything else is better.

In addition to a basic weapon, Cadence starts off with a single bomb, no armor, no spells, no torch, and a shovel.  The walls of the crypt are dirt, so you can create your own shortcuts between areas and find hidden rooms with a bit of digging.  Knowing where to dig is either guesswork or aided by finding a torch, which expands Cadence’s viewing range so you can see what those walls hide behind them.  Digging, like combat, is done automatically by pushing in the direction you want to go, and serves a dual-purpose of blowing off a beat without moving.  When you’ve got an enemy two squares away that you don’t want to close the distance towards because when you move, he strikes, having something to do so that it approaches you keeps the beat combo alive. 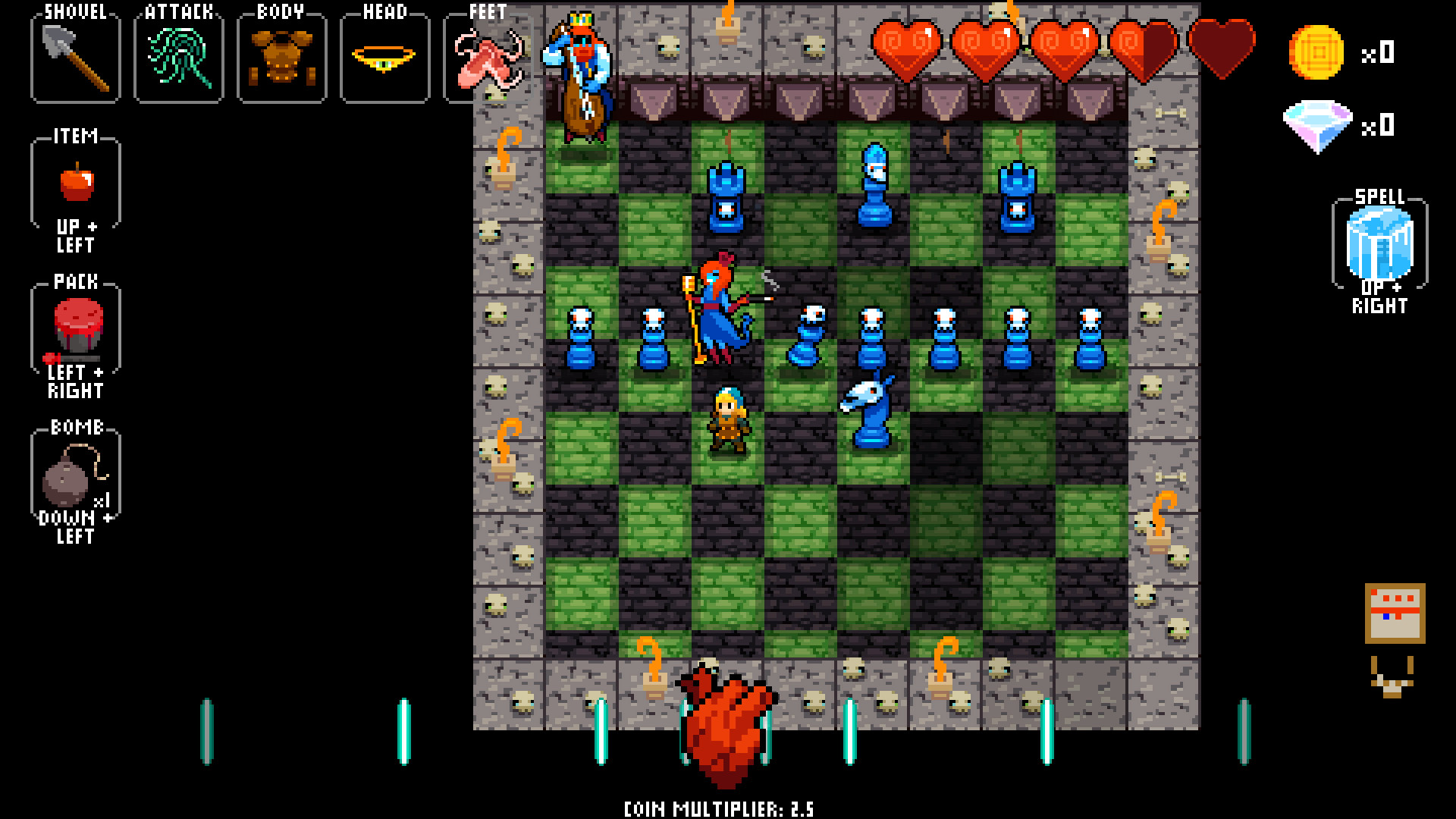 Everything in Crypt of the NecroDancer moves to the beat.  Skeletons move every other beat, blue slimes move a square then bop in place for two beats before moving again, rock golems get a move every four beats, and some enemies only move when you do.  Each enemy has a pattern and it’s all synched to the music, but sitting still and waiting for them to dance their way to you is a great way to die poor.  Each enemy drops gold, and the more you kill the higher the gold multiplier rises.  Miss a beat or take a hit and the multiplier bottoms out, and you desperately want that gold for the shop on each level of the dungeon.  Weapons, armor, spells, healing food, and more might be in there, and a rhythmless adventurer is a broke adventurer.  Plus gold doubles as score on the daily dungeon, and chasing after a bit of scoreboard bragging rights is always a good time.

In addition to the basic dungeon mode, Crypt of the NecroDancer is loaded with extras.  Beating each of the four levels of the dungeon unlocks new characters to play as, each controlling differently from Cadence.  As you travel through the dungeons you also earn diamonds, which can be spent to open up a world of extra content.  New items to find in the dungeon, bonuses to the gold multiplier, and even practice modes for the bosses and mini-bosses are all available for purchase.  Characters rescued from the dungeon open up new rooms in the central area, giving access to new info and practice opportunities, and the entire package is rounded off with endurance, story, and even local multiplayer modes.  There’s a ton of content for your rhythm action roguelike dungeon-crawling RPG in here. 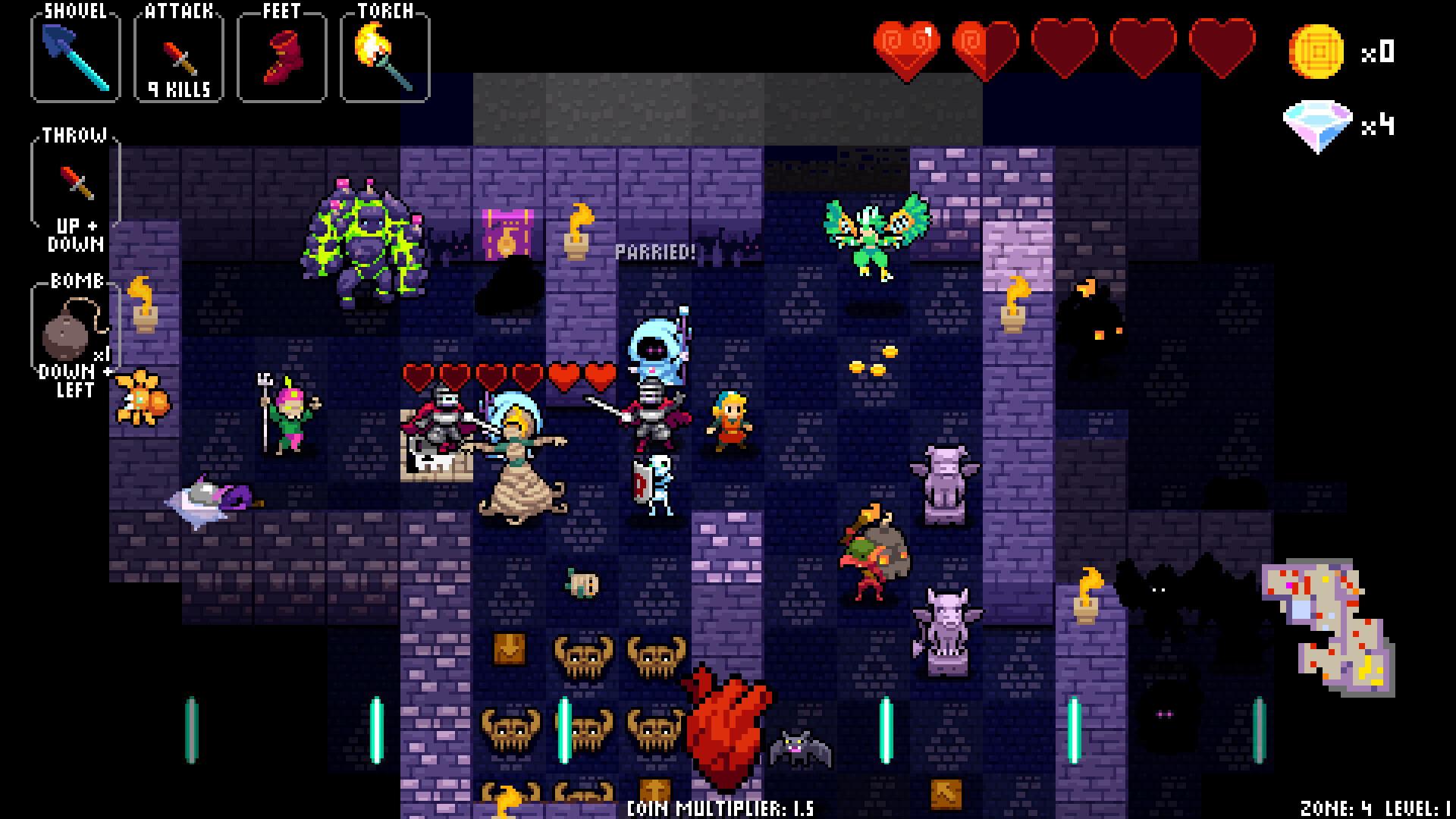 Crypt of the NecroDancer is a phenomenal dungeon crawler.  It’s loaded with personality, great music, fun characters and deep action that only appears simplistic on the surface.  Every move synchs up to the music, pushed forward at a steady pace that makes it easy to screw up until you learn to dance with the dungeon.  Each enemy requires its own strategy to defeat, and while they may be relatively simple on their own, they rarely come singly.  Figuring out the best course of action on the fly, knowing the strengths of each weapon and spell and learning when to use each to its best advantage while coming up with a plan as the rhythm pushes you forward is always a great time, even when screwing up a single move sets off a failure cascade that results in death.  Retrying is quick, painless and practically mandatory.  The necromancer’s dance-club dungeon is only missing a bouncer who doesn’t think you’re quite good enough to be seen with the beautiful creatures to complete its image as the best nightclub in the underworld, and even if had proper security, there’d probably be a way to combat-dance it into oblivion.