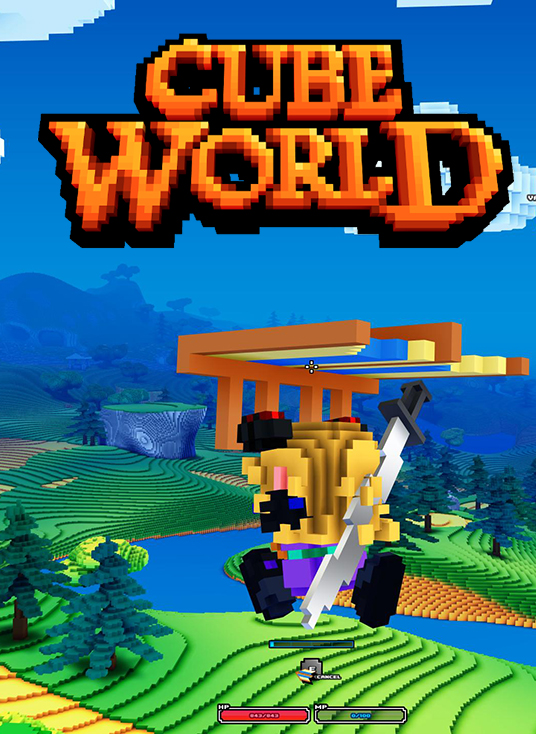 The map extends forever in all directions, an endless world of potential adventure.  Its blocky hills and valleys, mountains, volcanoes, deserts and oceans teem with monsters guarding loot in various forms, waiting for a questing hero to put it to good use.  Friendly bands of warriors wander the landscape, giving advice and sometimes helping in combat, and the occasional town or settlement provides a safe spot to get down to crafting better gear.  The wilds of Cube World are a massive series of lands filled with quests and exploration for the self-motivated adventurer, with the small disclaimer that each new area is the start of another quest to rise from what’s effectively level 1.

Cube World is a cheerful blue-skied open-world action/RPG where you’re free to go in whichever direction catches your fancy at any time.  Traveling is easy if you don’t mind walking, but at the start the character you create is incredibly weak.  The game starts with a choice of race, gender, character class, and some options for designing just the right head, and then leaves you free to do whatever you’d like to do next.  A big part of Cube World is figuring it out, which can be nice when you’ve got a few systems down and significantly less helpful at the start when there’s not a single hint as to how to deal with a land crawling with monsters that can take you apart in a few hits.

Cube World‘s combat appears simple: hit button, smack monster.  Some classes do this up close with swords, clubs, daggers and fists, while others rely on bows or wands, but for the most part it’s a fairly direct use of force.  Each character class has a pair of specializations as well, which change up the secondary and passive abilities.  The Mage, for example, can either specialize in fire for serious attack power or switch to the pleasant healing abilities of water, while Rogue can be a stealthy assassin or deadly ninja.  The specialization can be changed at most towns with no charge, and learning the abilities (FAQs are your friend) goes a long way towards making combat more fun and effective.  Standing there pounding the standard attack button is the obvious thing to do and Cube World‘s biggest flaw is that it doesn’t teach the player not to do that. 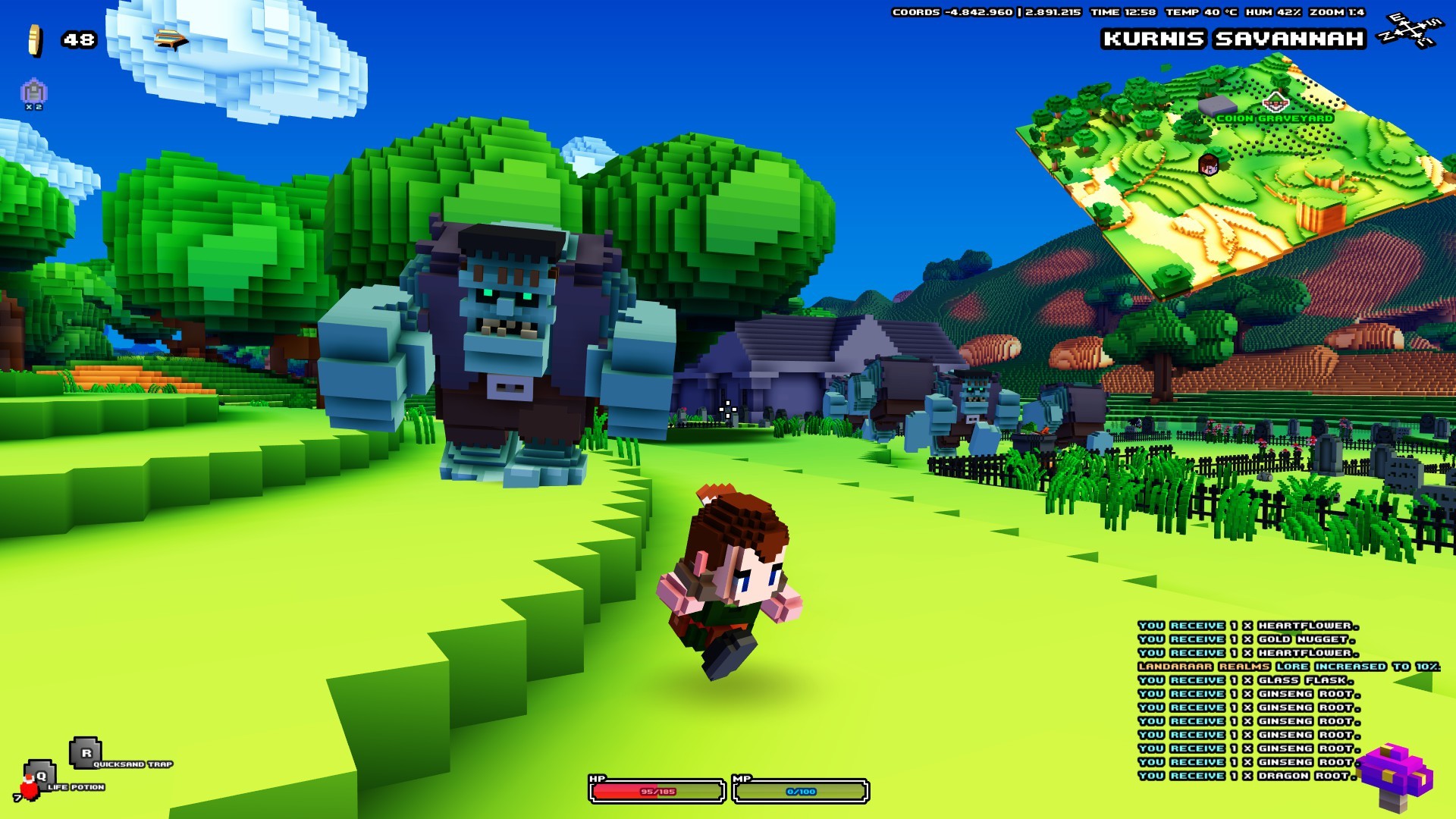 Once you’ve got combat down, though, the game starts to open up.  No matter which character class you choose it’s still weak at the start, so eventually it becomes clear that backup is required.  Death is common but also relatively penalty-free, only putting you back to the last-visited respawn point with no loss of gold or equipment, but it’s still nice to win a few battles.  Putting the cursor over enemies reveals their strength, with white being lowest level, green the next tier up, then blue, purple and crazy-powerful gold.  White, green, and even blue-tagged enemies can all be taken care of at the start of the game if handled properly and it doesn’t take too long to figure out that aggro-ing a few creatures and running for help from a party of friendly wandering adventurers isn’t cowardice but rather a viable strategy.  Defeated enemies will always drop a gold coin or two, and with a little luck a good item drop will start the road to powering up your character.

There’s no experience in Cube World and instead all progress is tied to equipment.  Weapons and armor are graded the same as monsters, by color, which gives a quick overview of effectiveness while the stats break it down more clearly.  In addition to attack strength and defense all equipment comes with an HP bonus, while specific pieces of armor can improve critical hit chance, speed, etc.  Seeing as each character class can wield two rings, an amulet, boots, gloves, body armor, shoulder pads and a weapon or two, there’s plenty of room to grow.  It can take a bit to get a foothold in an area, getting strong enough to not have to avoid most encounters, but with a good drop or two the progress in power moves along nicely. 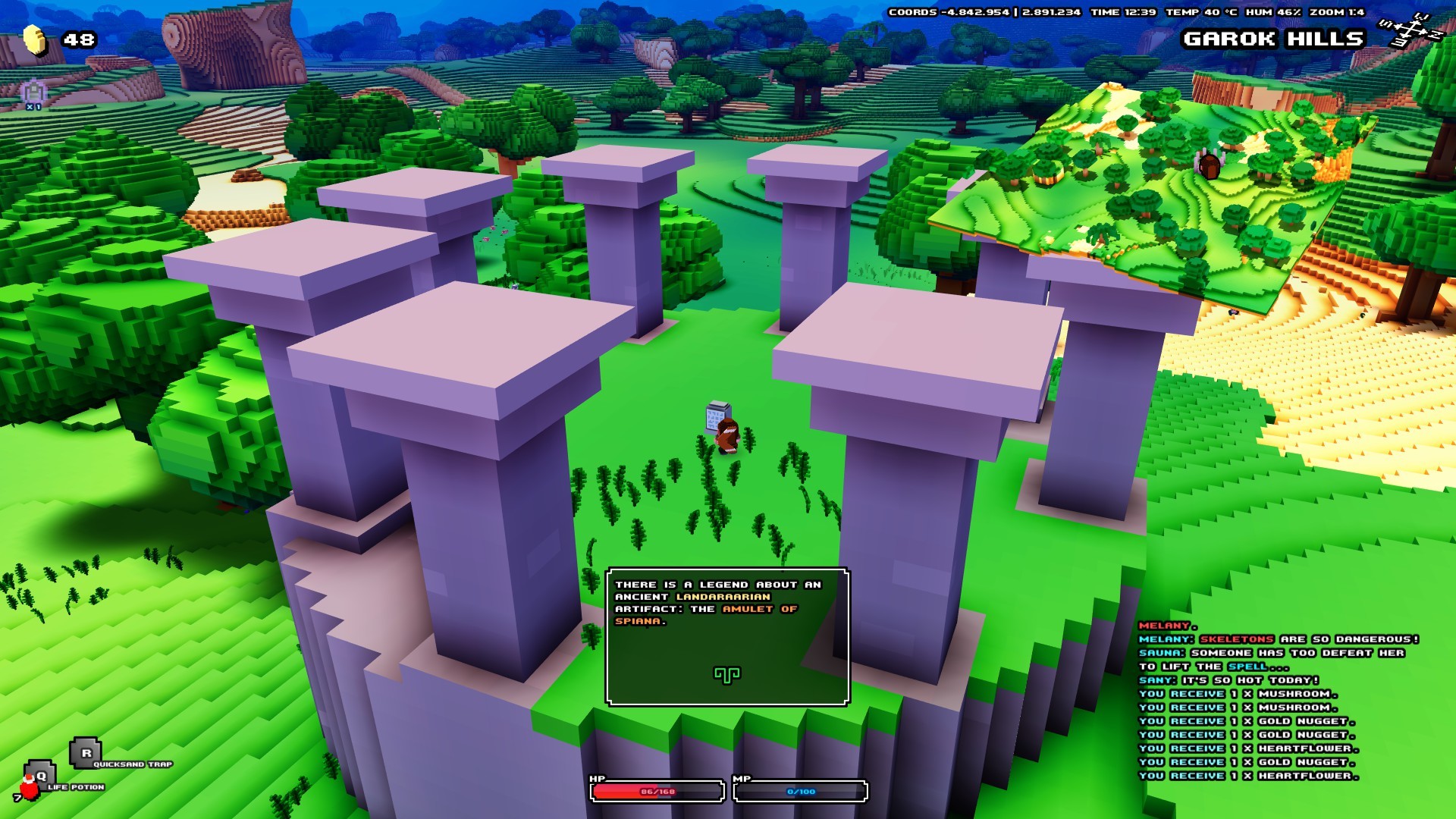 The most controversial aspect of Cube World is its regional system, and what this means in practice is that almost anything you find in one area is useless in the next.  Found a boat and are out sailing the ocean past the current area’s border?  Sailing instantly turns to swimming, but if you paddle back the way you came you can instantly start sailing again.  This also counts for weapons and armor, which means while in one land you may stride tall as the undefeatable hero with the epic-est of epic gear, you’re just monster-chow the next area over.  It’s controversial because it can feel like losing progress, but also makes a ton of sense.  One of the problems with open-world RPGs is that players get overpowered, making encounters nearly worthless, and that doesn’t happen much in Cube World.  It takes a bit of getting used to, sure, but the progress from demigod to peasant and back again is both kind of nice and not particularly difficult with experience, and has the added bonus of making exploration as important in the dozenth area as it was in the first.

That’s not to say there isn’t some permanent progression, though, and that’s found through rare artifacts.  Artifacts bump up non-combat abilities, like climbing speed, diving skill, the lantern’s light radius, etc.  These are meant to help with exploration rather than combat, which makes sense because you spend far more time running around Cube World than fighting through it.  Monsters have a fairly low aggro range, making it easy to pick your battles, but anything that helps speed up traversal of the several square kilometers of each zone means that powering back happens much more quickly.

There’s more in Cube World to do than explore and fight, albeit not much more.  Various plants and minerals show up across the landscape ready to be harvested, then crafted into potions, healing food, weapons or armor.  Chatting with friendly NPCs can reveal mini-quests on the map that rewards region-locked gear such as a hang glider, boat, or mysterious instruments that you’ll need to figure out where to use.  The map is actually a thing of beauty, with a fantastic zoom level that jumps out to show a world view or zooms in so you can pick out points of interest without need of being directed there.  Zoom in far enough and you can even get a sense of where the shrines are, which act as revival points as well as allow instant teleportation back to them for handy fast travel.  Cube World isn’t a complicated game, but what it lacks in complexity it makes up for in charm. 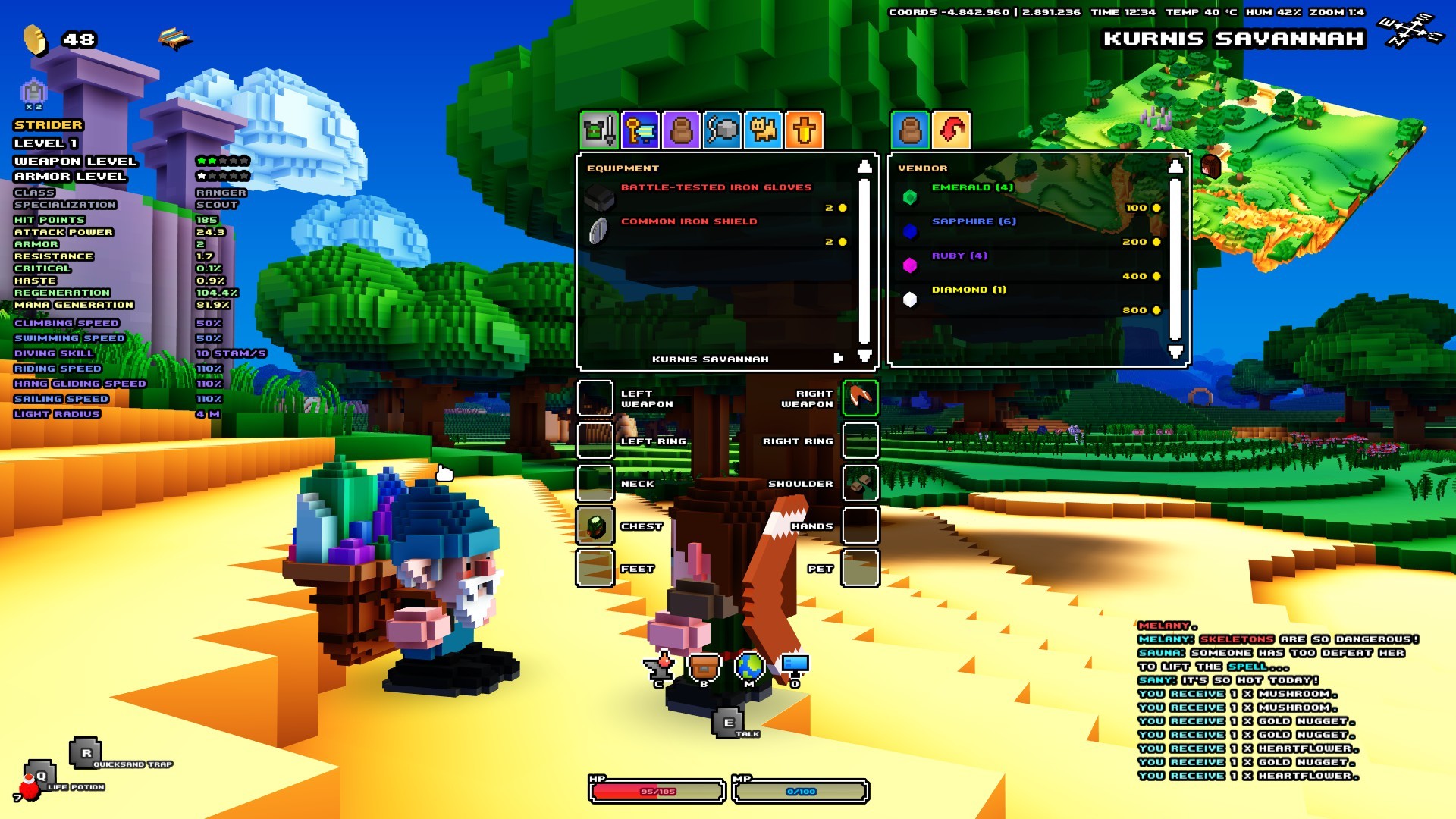 There was a huge expectation put on Cube World since its alpha, and while things have changed significantly since then the resulting game is almost exactly as promised: a big open adventure to explore at your leisure, with no pressure beyond what you bring to it.  Whether going it alone or teaming up with friends there’s plenty to chase after or you can grab a bench in a nearby village and chat as the in-game day slowly drifts by.  Getting started and learning to first survive and then have fun doing it takes more experimentation than it should, but there’s a consistent internal logic to the game’s systems that eventually comes through, making for a game that always has a new adventure waiting wherever you care to look.  The rise and fall and rise again of the progression system may not be for everyone, but for those who recognize that the real treasure is the quest to become a hero, Cube World grants the opportunity to do that in an endless succession of new and adventurous lands.