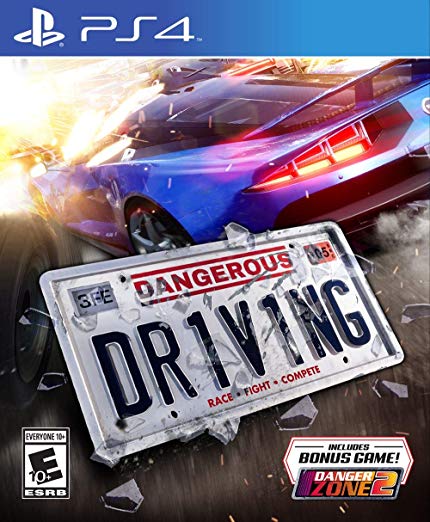 Arcade racing games were at a premium in the late 1990s but did not translate so well to consoles. Games like Cruisin’ USA and Crazy Taxi were hits for quick plays in arcades, but the lack of longevity once these games hit consoles started to kill the genre as the death of the arcades were under way. Arcade racing needed to adapt and titles such as Carmageddon and Burnout rose to the occasion in promising a great console gaming experience for arcade racers. Developer Criterion was the catalyst that built the Burnout franchise as EA has basically left it for dead. Three of the original members of this team formed a studio named Three Fields Entertainment with the goal in mind of developing a Burnout title on their own terms. The last Burnout game, Burnout Paradise, strayed away from the original formula by adding an open world. The team at Three Fields Entertainment want to make their game capture the original feeling of the franchise and this game is Dangerous Driving.

This small team has spent a good bit of time in developing Dangerous Driving from the ground up. The result is a fast and beautiful game full of epic crashes and quick races. At its peak, Dangerous Driving feels like a true successor to Burnout. What lies underneath is a bit more deceiving as more time is spent with the game. Dangerous Driving consists of 27 different cars spread across 6 classes. There are even police cars in the game and wonderful knockoff liveries of classic Formula One cars. It also consists of seven racing environments that range from mountains to deserts that will vary in combination depending on the race mode. On paper, there is quite an attraction.

Over time, the 27 cars in the game start to sum up the linearity of Dangerous Driving. Each class you unlock becomes faster, but ultimately nothing with the AI changes. Each race will have the exact same car in it. Having the tuned, advanced or prototype version of the car really renders nothing different. There aren’t cars that can take a better beating or have certain attributes to them. Players will use a Nitro meter for added boost and can drift wonderfully around corners, but in the end it all feels the same. Even worse is the lack of witty names for the cars. Everything is named just what it is such as Advanced Sedan or Prototype Coupe. Nothing cool like Prowler or Wiggler, something that arcade racers generally have. 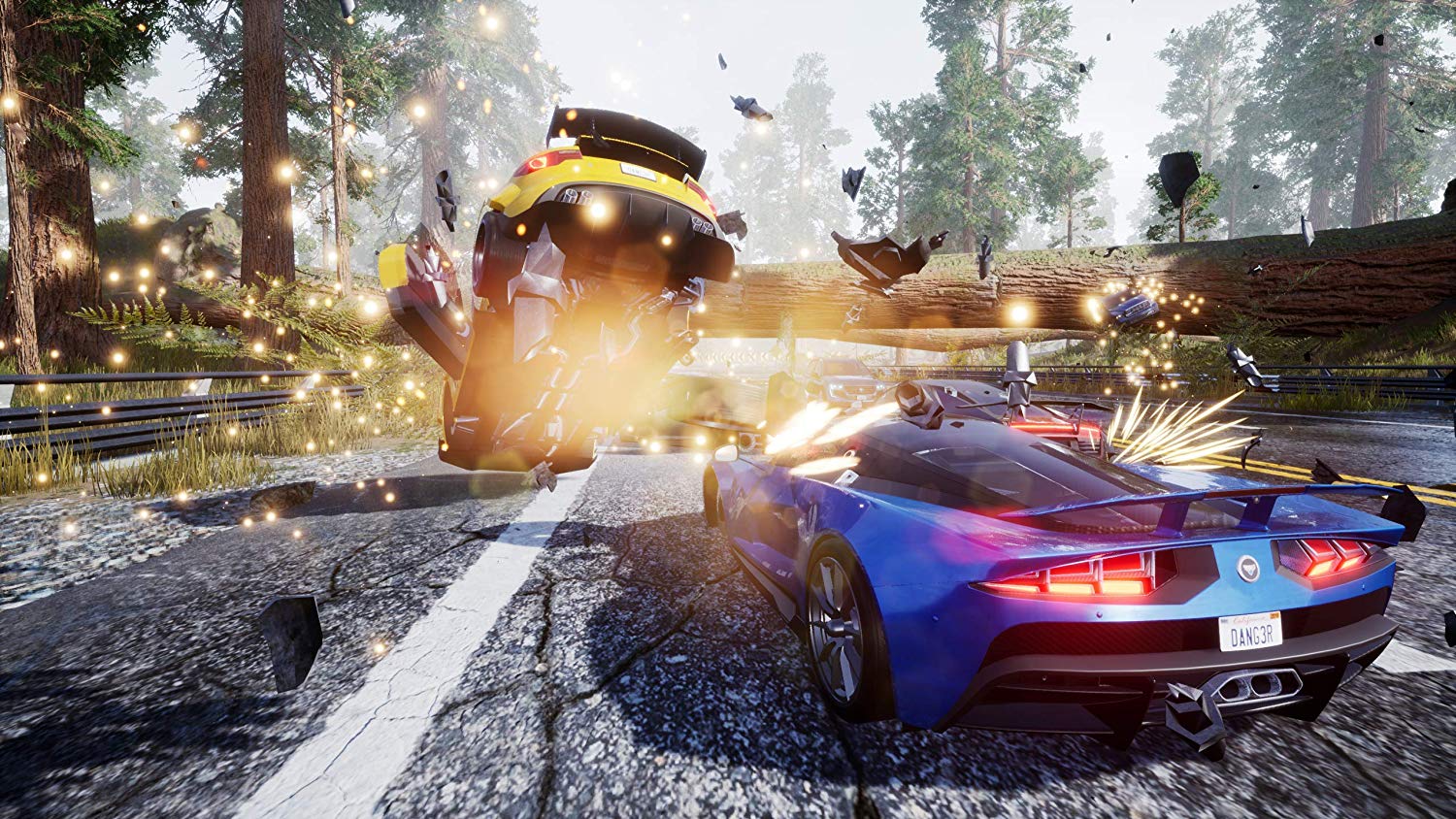 The AI is the most glaring issue with the title. Yes, it is an arcade racing game so expect rubber band AI, but it feels below that. There isn’t much point in taking out your opponents if they spawn immediately behind you. One strange inclusion is when a car gets taken out on the track, the corpse is left there and the AI just spawns another. This does add to some challenge for longer races, but it’s hard to tell if this was the plan from the developers or if the decision followed the path of the entire game’s design. If your car gets taken down, you get dropped to no higher than fourth out of a six car grid. The top three AI opponents, no matter how fast you go or how much they get taken out, will always be right behind you. Once this becomes realized, it takes a good bit of fun out of the game. Couple that with unlocking new cars that really feel no difference and it truly hurts the experience.

Dangerous Driving includes nine different game modes with some a bit more fun than others. Pursuit races are fantastic as you will play as a police car and work on taking down some AI opponents that have a health gauge. The Heatwave races focus on how long you keep your Nitro meter full and Road Rage rewards points for takedowns. There are time attacks, elimination races and one-on-one races, as well. These are all good but the design behind playing these modes is baffling. You won’t be booting the game and choosing a mode you want to play. Everything in the game is locked and you will need to progress through individual events to unlock more modes. Do you want to do a specific races with one of the knockoff Formula One cars? It’s going to take you a while to get to that point. The design is literally race, unlock, repeat. There’s little reward as the better cars don’t really feel any different. 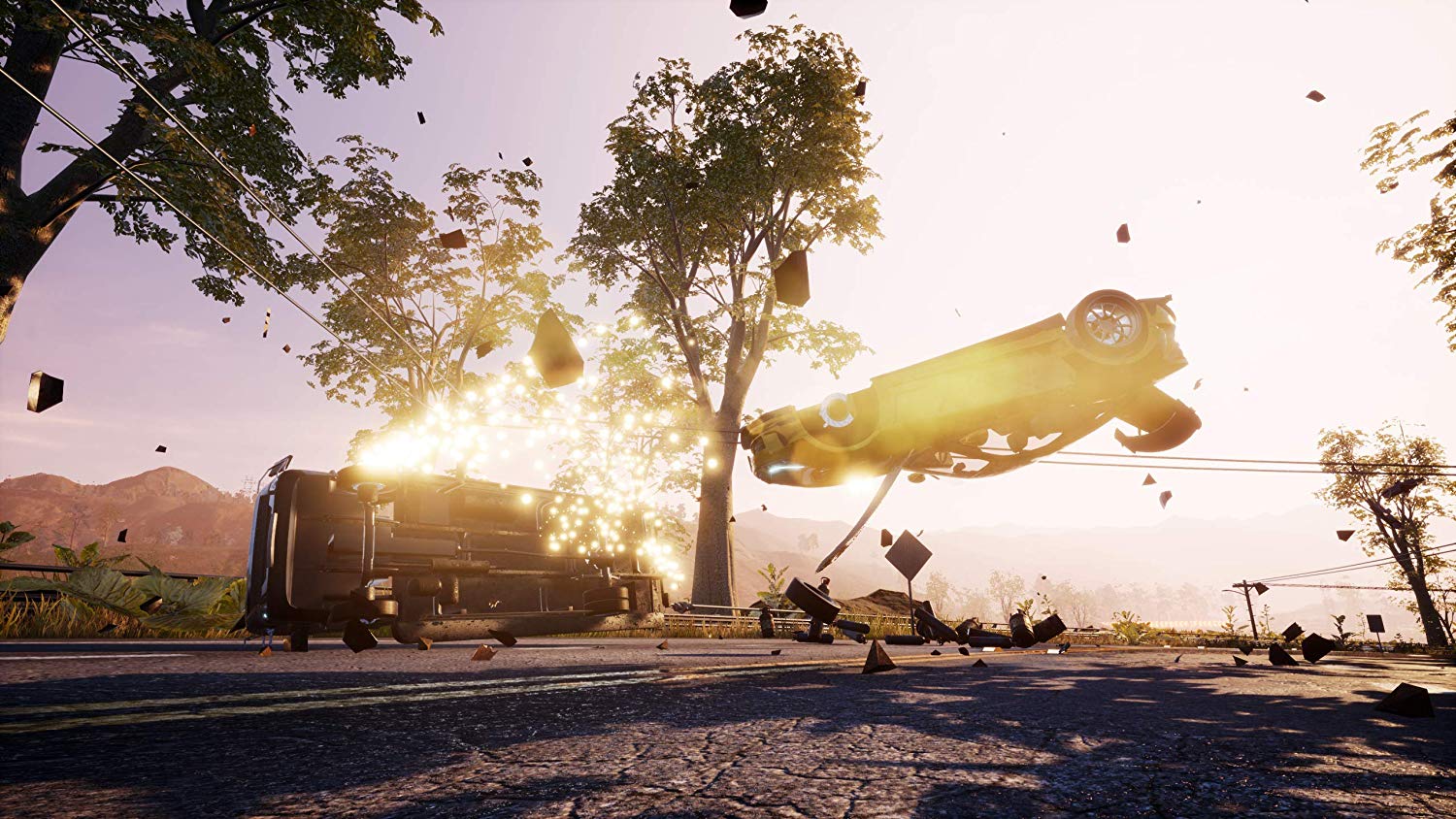 Where Dangerous Driving shines is on the track, however. The controls are tight and responsive and drifting is fun and easy. Anyone should easily be able to pick up this game and do well. Working on building your Nitro Boost is the strategy involved in each race along with avoiding traffic and taking down your opponents. The physics and collisions feel great and taking down opponents is satisfying when it happens. It isn’t too difficult to take an opponent down.

The visuals are beautiful as the lighting really brings the track to life. The game does use a bit of motion blur, but it sits at 60 FPS on the PlayStation 4 Pro and Xbox One X. The resolution on Pro only hits 1080p, but the environments still look great. You can say that Dangerous Driving doesn’t look boring. Water reflections on the road are on every track and the car models look grand, as well. Car accidents are a fiery and messy masterpiece and you will see debris fly during races. There were occasional graphical hiccups, but they rarely occurred. The team made the game seem faster than what it actually is and that is well worth noting. 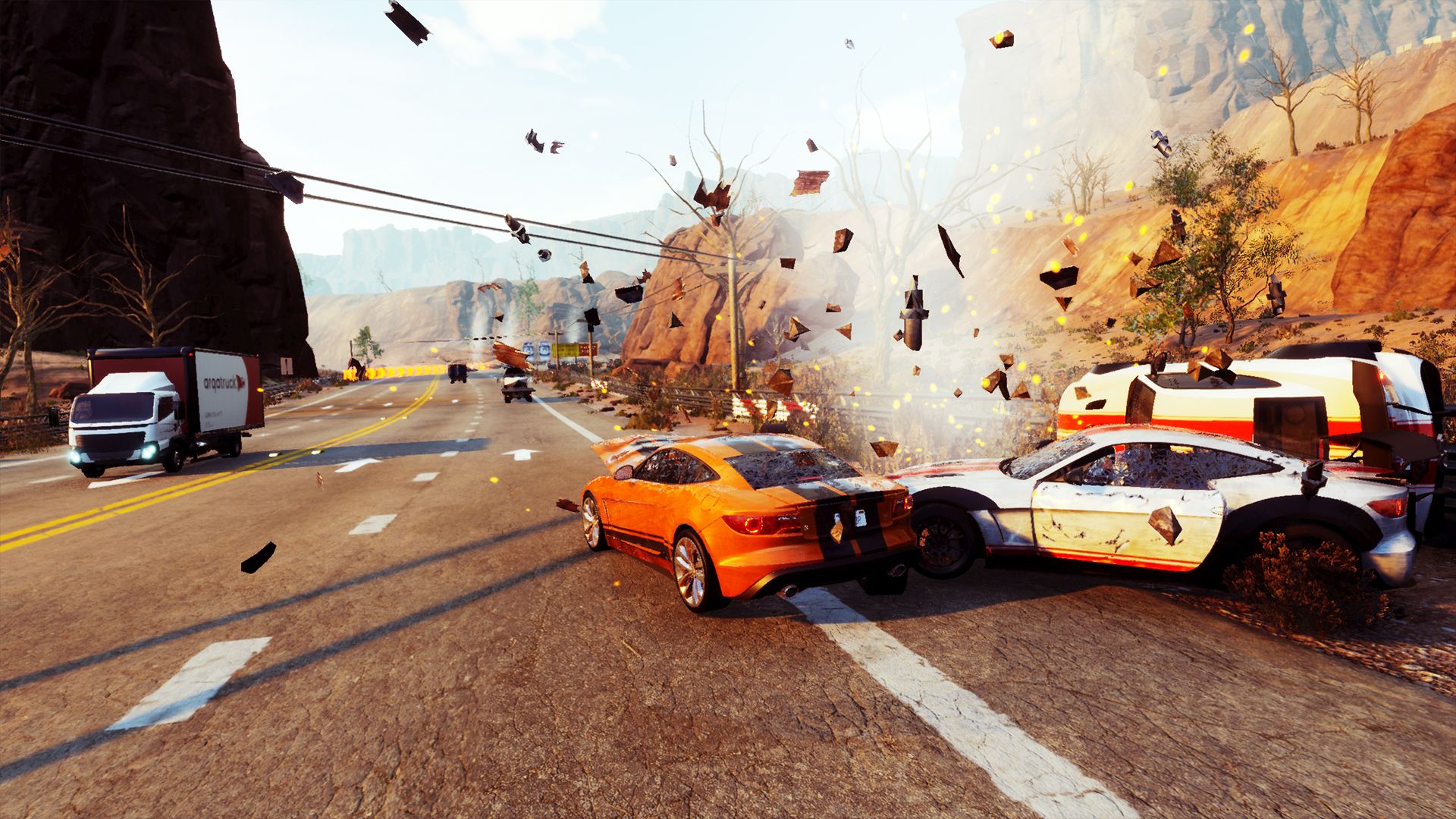 The soundtrack is nonexistent outside of the title song that wears on you quickly. The team did allow for integration of Spotify into the game, but otherwise don’t expect any music while racing. Not everyone has a Spotify account, especially a Premium Spotify account. The developers do create their own playlists for the game, however. As for the in-game sounds, the engine sounds are varying depending on the car, while the collisions and accidents do sound fantastic.

Outside of leaderboards, the game currently lacks any multiplayer. The team plans on bringing online multiplayer within the first month of release that will add some depth, but we won’t know how that will be implemented until it happens. A game like this can closely benefit from local multiplayer, especially if the team had implemented a Crash Mode, which may have been one of the better things to play in the original Burnout titles. 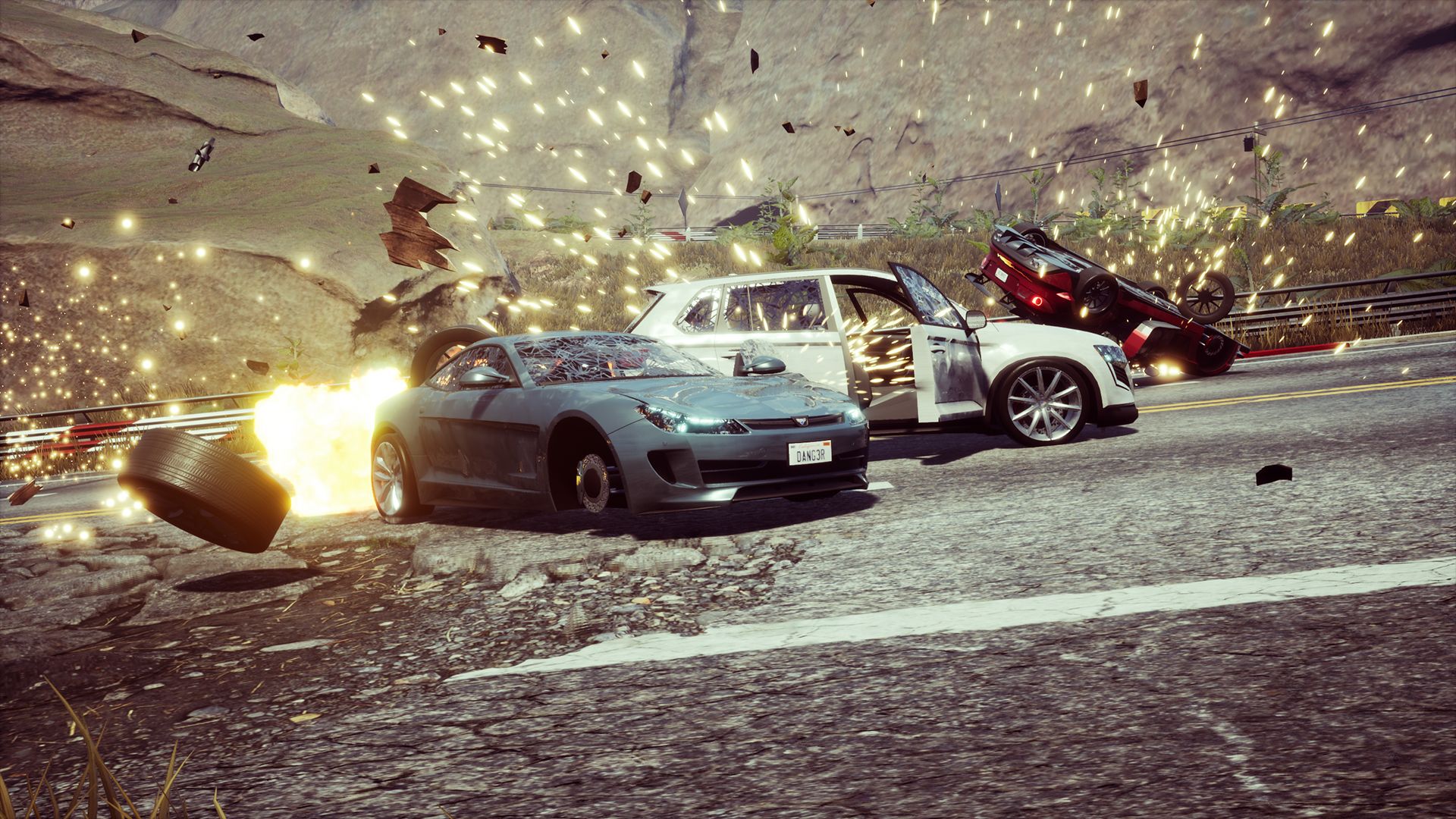 Dangerous Driving hits the perfect melody at certain points when focusing on what the team set out for it to do: be a spiritual successor to Burnout. At its peak, it feels like a Burnout game. The controls and visuals are fantastic and are properly tipping the cap to late 1990s arcade games along with the Burnout franchise. Collisions are massive and there’s a good bit of variety of cars and game modes. What the game does bad really hurts the experience. The AI lacks basically anything and the return rewards of unlocking new modes and cars feels all for nothing. The game also isn’t full price, which is a bonus, but I question if it’s worth $40. For a small studio playing homage to its roots, kudos are deserved for that.