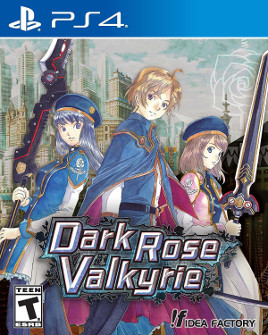 Even though personal familiarity with games put out by the dynamic duo of Compile Heart and Idea Factory only encompasses a fraction of their titles, the titles I have played have caused certain expectations to be in place. These are games that are enjoyable, though they have some imperfections and areas that could use more polish. Not game of the year material, but worthwhile JRPGs. Elements that I expect to find in Compile Heart games include characters that are interesting but generally not the best and brightest, some immature humor, and female characters in revealing clothing with generous bosomy endowments. The first impression of spending a few minutes with Dark Rose Valkyrie seems like they may have taken a different direction with this one.

The player begins as Asahi Shiramine, taking command of a special military unit known as ACID that fights beasts known as Chimera which are the result of humans being infected with a virus that came from a meteor. The first order of business after his initial briefings is to meet his mostly female squad in the military base. The females are wearing proper uniforms in their portraits in the introductory conversations. The introductions to his subordinates in the military base combined with the more reserved approach to their traditional humor led to my initial reaction of thinking that this is a Compile Heart game mixed with Trails of Cold Steel, especially since the battle system and menu screen resemble the Legends of Heroes title more than Fairy Fencer F. That is until later on when a boss battle damages the clothing of one of the female party members and she continues to fight in her underwear, and this combined with the leader’s conflicted emotions of wanting to be a respected gentleman of a commander goes at odds with his natural male fondness of scantily clad females drives home the point that Dark Rose Valkyrie was brought to you by Compile Heart and Idea Factory. It should be noted, however, that this game is progressive and favors gender equally and both male and female party members will end up spending a good portion of the game running around in their skivvies.

Which is not a bad thing, the humorous character interactions with their awkwardness and other idiosyncratic behaviors has been a highlight of Compile Heart games and presents an interesting feature here. One of the features of Dark Rose Valkyrie that separates it from other RPGs is it blends a visual novel component into the story. One of the party members is a traitor, and the identity of the traitor is randomly assigned in each play through. In between missions there is visual novel style interview system where Shiramine can talk to the party members, ask them questions, strengthen his bond with and help shape their opinion of him. Learning about their behaviors can help clue the player in on who the traitor actually is, and depending on what sort of attachment Shiramine forms with each squad member can play into how the player feels about busting the traitor. 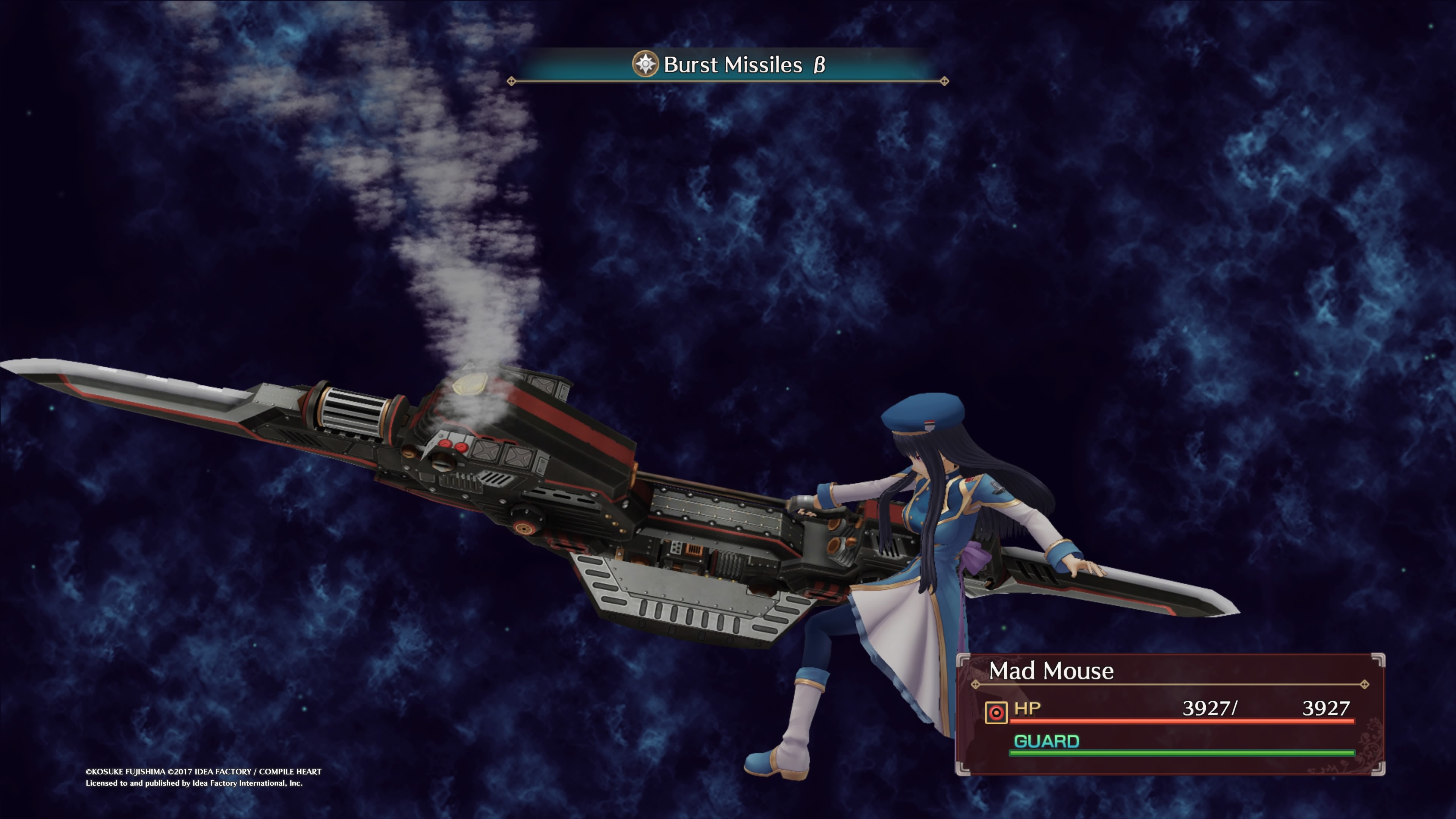 The largely female squad does present a variety of different personalities for Shiramine to learn how to deal with. Yue is a hardcore soldier, who in an early interaction with Shiramine seemed very resistant to expressing any sort of personal viewpoint or really do anything beyond following orders. Coo and Amal are twin sisters(?) that are very different from one another. Coo is supposedly brilliant, but extremely shy and is not comfortable around men, whereas Amal is not someone whom one can assume gender. Is Amal really physically a boy and hanging out in the female battalion in drag, or was Amal born female and identifies as male but gender reassignment surgery wasn’t an option in 1929, even though this alternative version of 1929 Japan has many examples of anachronistic technology that makes it seem more like modern times. In any event talking to these characters and the several other party members at the base is one of the highlights, especially since part of the amusement comes from Shiramine’s level of discomfort in certain settings.

When Shiramine is not chatting up his squad, forming lasting friendships while trying to expose someone’s treasonous nature, he is tasked with completing missions from his commanding officers. Some of these are required, but I would assume most JRPG fans are going to complete all optional missions as well. These may involve investing money into research or finding items but most seem to involve killing Chimera. Or trying to kill extremely powerful Chimera who end up running away. The Chimera might look scary, but just like dinosaurs are really big chickens. This shameless display of cowardice by the Chimera happens a few times throughout the course of the game. 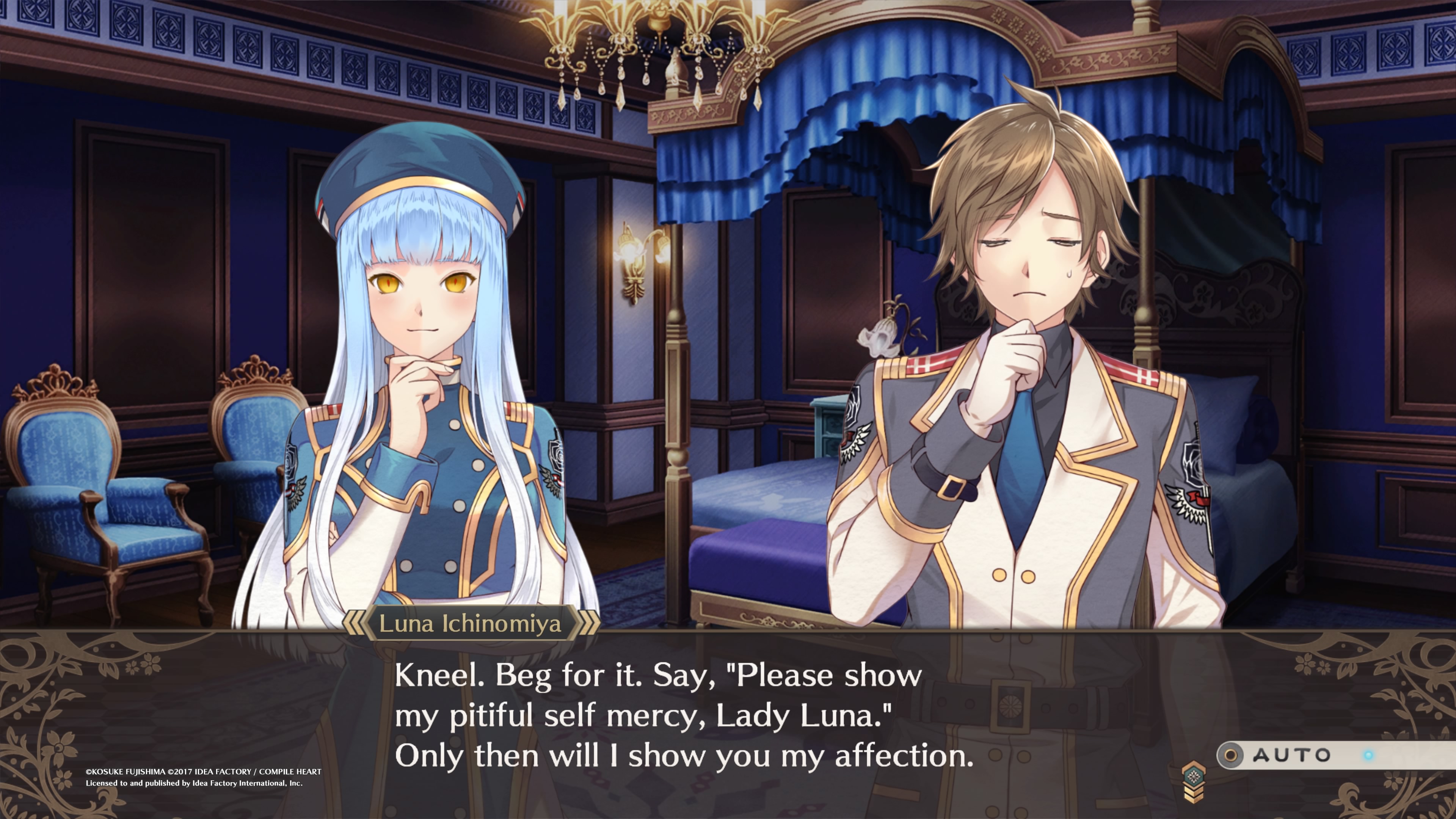 Leaving the safety of the military base takes Shiramine and company into a urban environment that looks like a forest if a forest could be made entirely of densely populated grey buildings. Random Chimera roam the urban wasteland, and there are paths that lead into parks and other dungeon areas. Dark Rose Valkyrie uses a day/night cycle found in some other RPGs and tracks the passage of time. During night is when the exceptionally powerful Chimera come out, so taking the passage of time into account when formulating a plan to tackle missions is a good idea. The environments are not that exciting to look at. Bland is a good way to describe them, they aren’t so poorly designed that they cause visual pain but the scenery isn’t very memorable.

The combat in Dark Rose Valkyrie is a bit of a mess. Like Fairy Fencer F, the random encounters are visible on the map and meander about in their aimless random pattern. If they see the player they typically give chase. If they crash into the player or attack from behind, the battle will commence with the Chimera getting to attack first. Conversely, if the player is able to strike the Chimera on the map, battle beings with the player getting the opportunity to draw first blood. Once battle begins it goes into a turn based brawl that in its most rudimentary parts will be familiar ground to anyone who has spent time with JRPGs. 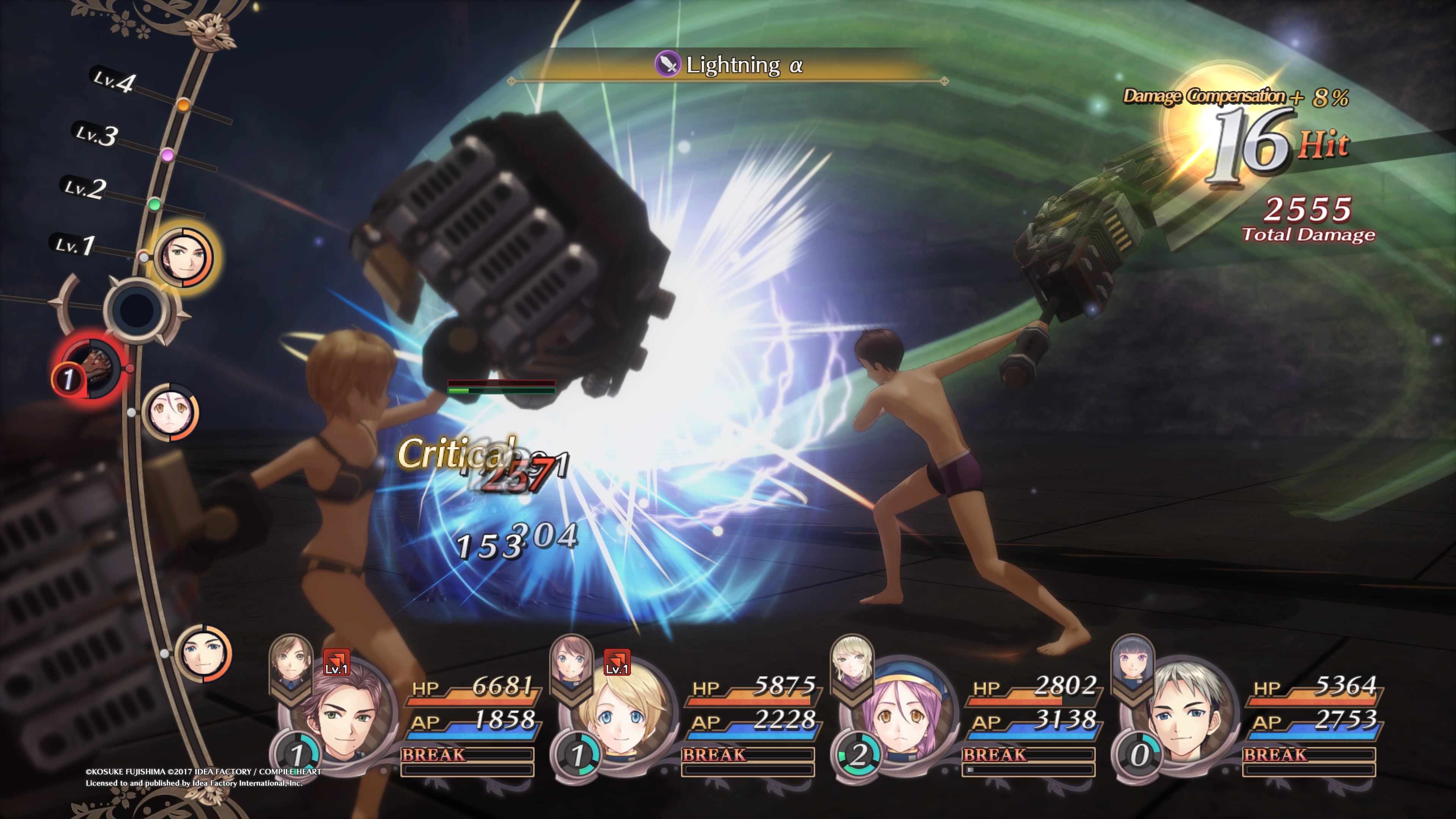 Now, criticizing the battle system pains me a little because I see how ambitious it is with its complexity and I want to applaud the developers for not just having the generic fight magic item run command menu. The problem with it is the more complex something becomes the more fine tuning is needed to ensure its proper execution and I think that is where things fall apart. In battle there are four active party members and the other characters serve support roles in the side. When a character breaks an enemy’s guard during a combo, the support players join in and the Chimera receives a royal beat down. This is actually a nice take on the traditional fighting system at first, but grows tedious quickly since battles start to go into a pattern of just having to wait for a 37 hit combo to finish off Chimera so the player can repeat that process on the other two remaining ones. This assistance technique is a great idea if it were used more in moderation; in the early stages of the game it happens in close to every battle so it loses its luster quickly, and in later stages the Chimera have a tendency to die before their guard can be broken.

Each character has three levels of basic attacks, which are a melee combo, ranged combo, and what appears to be a concentrated hit. To left of the battle screen there is a bar where all the party members and Chimera move on and at pace based on their speed. When they are given the option to input a command, it is acted on when they scroll up to the appropriate level mark on the line, so a level one attack will happen before a level three attack. This is a good tool to visualize the order of attacks in an active time turn based battle system, especially since the fights are combo driven and typically multiple characters are acting simultaneously. In addition to this, characters have Charge attacks and Arts that consume action points, which are essentially the special abilities or “magic” attacks. There is a TP gauge that fills over the course of the battle that can unlock Ignition and Overdrive modes, where Ignition will make the player impervious to some of the nasty status afflictions those filthy Chimera carry and Overdrive makes the character temporarily more powerful, which is probably what one would naturally assume Overdrive does. The battle system does have some good ideas and it is easy to see the potential, but somehow it ends up feeling like a grind most of the time. 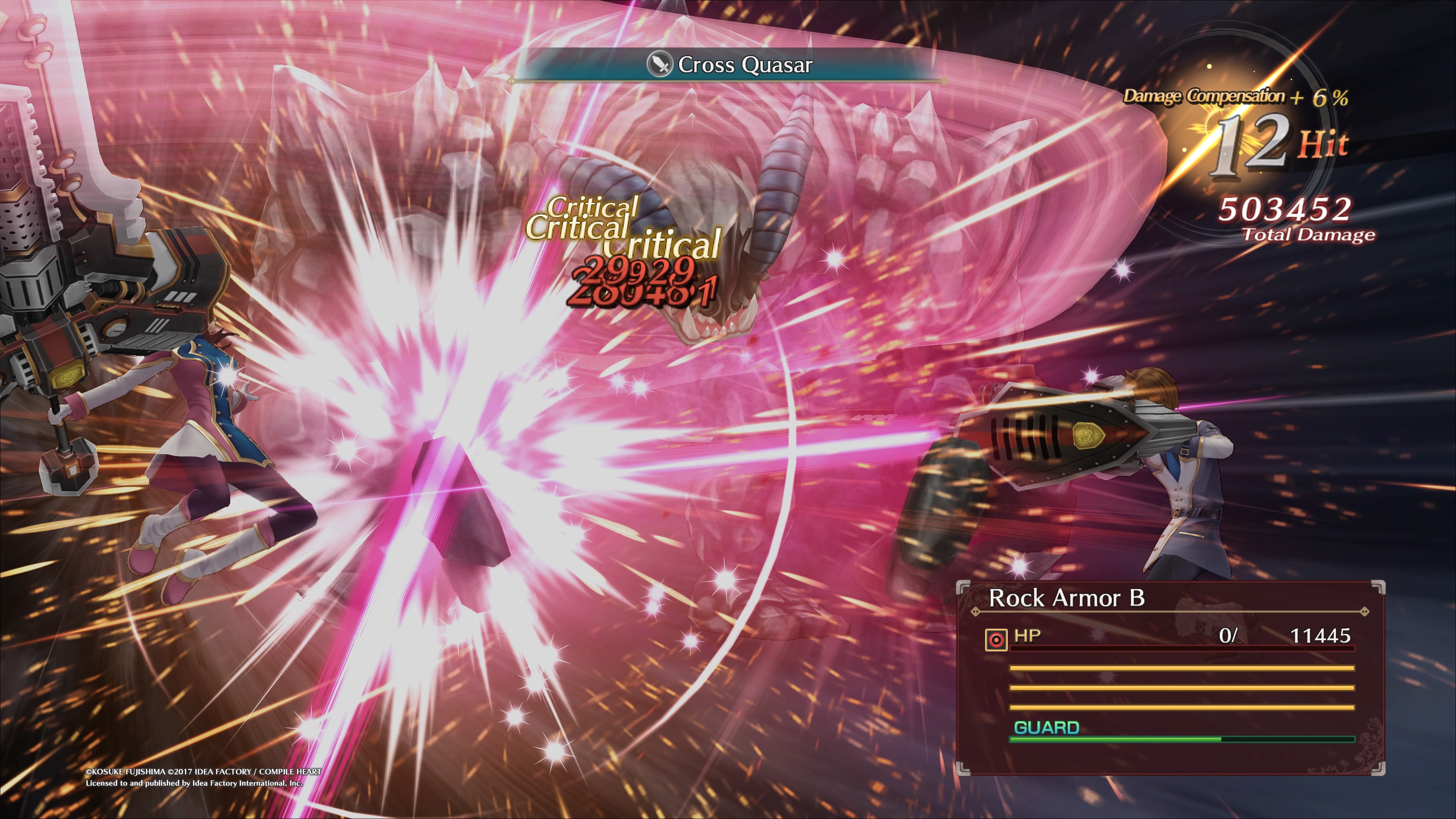 Dark Rose Valkyrie is a bit of a mixed bag. The hybrid of the visual novel inspired interview system mixed with a traditional JRPG is an interesting idea, and that the traitor is never set does give reason to play through the story more than once. The downside to it is like most JRPGs this is not a short game, and there are enough issues with the gameplay where tackling it once would be enough for most people. The pacing makes it difficult to fully get immersed into the story and outside of the interview portion, the gameplay does not live up to its potential, especially in battle. The result is an overall good but unremarkable JRPG. Compile Heart’s signature charm and humor is present throughout, so fans of their other games will likely be able to forgive its shortcomings and enjoy this title for what it is.