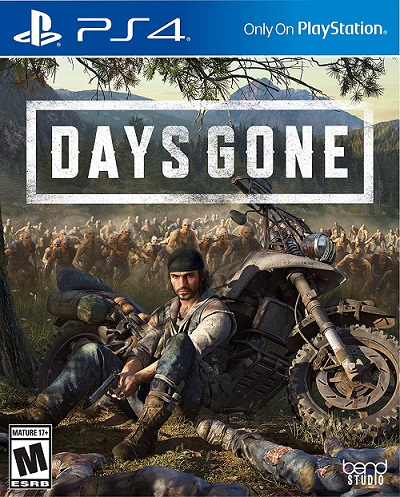 Sony Interactive Entertainment’s transformation into a single player, story-driven powerhouse continues with Days Gone, a brand new IP from Bend Studios. The Oregon-based developer has shown multiple times they have the chops to deliver story-focused games, but have mostly worked on other existing franchises. Now, after all these years, Bend Studios has the chance to break out with Days Gone, a post-apocalyptic narrative-heavy open-world game. After six years in development, does Days Gone mark another impressive entry in PlayStation 4’s library or should it be fed to the freakers?

Days Gone picks up two years after the release of a catastrophic virus that has mutated much of the population into freakers. You’re Deacon St. John, a biker who lost everything during the initial outbreak. Deacon now wanders the countryside as a broken man with a death wish. After a chance encounter, however, Deacon’s purpose in life is renewed as he sets out to discover the truth behind the events two years ago. The story starts rough with a brief and rushed introduction before players are thrown into Deacon’s shoes. The state of the introduction initially forces Deacon to come off as a stereotype. A gruff bounty hunter who doesn’t care what people think has been played to death in the post-apocalyptic genre. Much of that facade, however, peels away as the hours pile up. The story picks up steam as more characters are introduced and developed. Each has their history and motives, and the game dedicates enough time to each for players to establish connections.

Deacon is the biggest surprise and manages to carry the weight of the narrative. The character arc is well-presented thanks to a standout performance from Sam Witwer who’s able to delve deep into Deacon’s soul. He may appear standoffish at the outset of the game, but Days Gone’s writing does a good job turning him into a compelling character by the time the credits roll. Overall, the narrative surrounding the game is solid, though predictable as Days Gone leans heavily on established post-apocalyptic tropes. Hardened survivors barking out orders, crazy gangs who worship the infected, missing loved ones and a mysterious science organization performing unknown experiments are all typical of the genre. It comes together thanks to solid writing, but don’t expect many surprises from the plot. Days Gone offers up plenty of story for players to digest. The campaign will last you anywhere between 25-30 hours and it’s easy to exceed that thanks to plenty of side activities. The story does drag in spots, and there are even moments when you think you’re at the end, but then the story keeps going. Still, those looking for a lengthy, story-driven experience will find a worthwhile experience here. 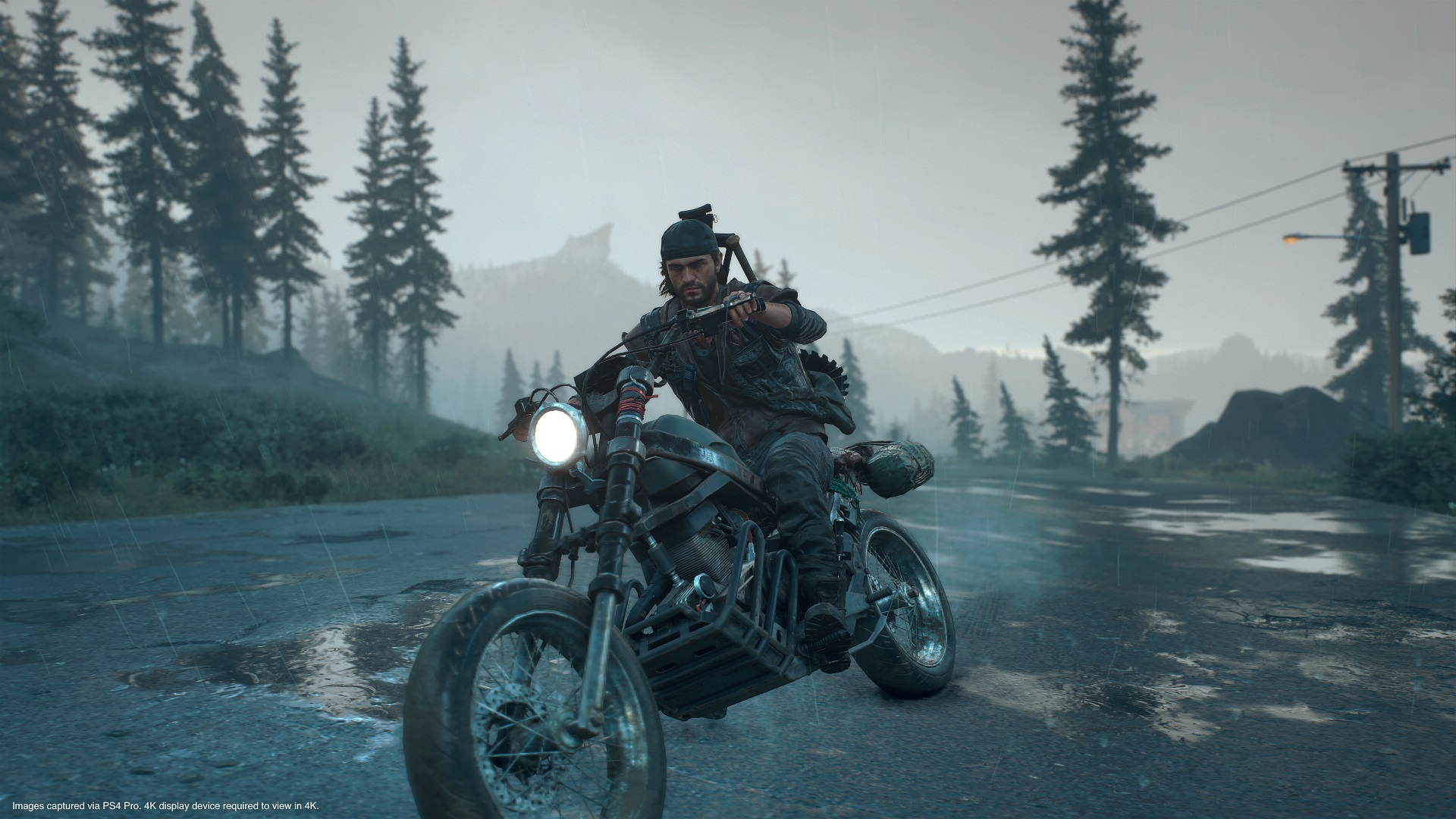 Days Gone takes place in the Farewell Wilderness, a large, fictional expanse of land in Oregon filled with a dense forest, a sprawling desert, rolling farmlands and snow-tipped environments. Players spend their time partaking in a variety of story missions and side activities. You’ll complete bounties, clear out infestations, go out on supply runs and clear bandit camps. What’s available is typical of an open-world game, but Days Gone does offer two things that aim to keep things fresh: the ecosystem and motorcycle.

The ecosystem of the world not only extends to the different biomes but also by what populates them. You have your natural wildlife, such as wolves and bears, but then you have the freakers. These infected individuals aren’t mindless zombies, but rather living creatures with their behavioral patterns. They sleep during the day and come out at night. They’re attracted to sound, which means you need to find ways to stay quiet. It’s easy to defeat freakers in small numbers, but try and take on a horde unprepared and you’ll get slaughtered. The creatures add a dash of unpredictability and tension to the world. Learning how to deal with them, especially as a horde, is both an exciting and horrifying challenge at the same time.

Deacon’s life revolves around his bike as will yours in Days Gone. Handling the bike is smooth and intuitive with controls that feel tight and precise. An intricate customization system allows for not only significant upgrades but also a variety of customization options that enables you to make the bike yours. There’s only one downside the motorcycle, maintenance. 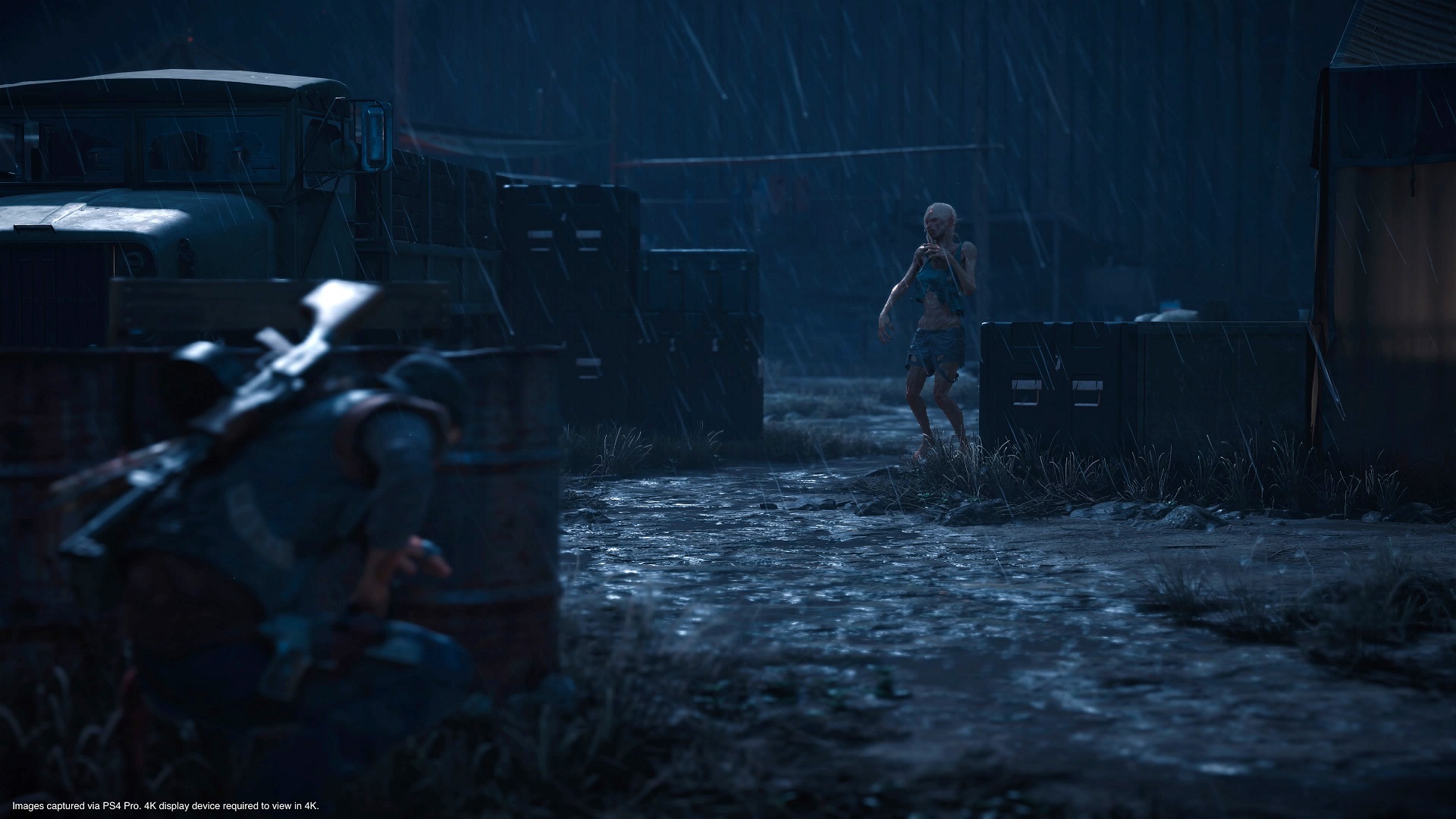 Wandering around Farewell Wilderness requires fuel and spare parts to repair the bike. Considering how often you’ll need to travel across the map, this becomes a problem. The idea of fostering a relationship between you and the bike is an interesting concept, but it just doesn’t work due to how frequently you’ll need to refuel and repair it. After a few hours of play, it’s a feature you’d wish was gone. It’s not just the mission design that feels familiar, as Days Gone also samples from some of the best gameplay mechanics of recent open-world games. With a focus on stealth and gunplay, Days Gone feels familiar, but it manages to make it all mostly work. Deacon has a large bag of tools that allow for players to craft their favored gameplay experience. Binoculars enable him to tag enemies; crafting supplies allow for the creation of traps, distractions, health items and bombs; and his trusty knife quickly dispatches foes silently. Not original, no, but the mechanics and tools make stealth fun and satisfying.

The best part of Days Gone’s combat, however, is the melee thanks to the wide variety of weapons Deacon can pick up and craft. Each weapon feels brutal, and the controls make it easy to execute combos and swap between enemies. It’s more than satisfying and the crafting system allows for quite a bit of creativity. While melee gameplay is fun and engaging, the gunplay falls flat. Firearms are dull, lifeless, and lack the satisfaction of a stealth or melee kill. The game rarely sets up engaging scenarios or arenas for gunfights, and the AI never puts up remarkable fights. Shooting controls feel loose and imprecise, forcing an over reliance on a bullet-time mechanic. While stealth and melee are Days Gone’s strengths, gunplay is not.

Sony Interactive Entertainment’s developers have a knack of crafting gorgeous games, and Days Gone is no exception. The world is breathtaking with blades of grass blowing in the wind, rain turning dirt to mud, and snow slowly accumulating on the ground over time. Character models and textures are also well detailed, particularly for main characters like Deacon and Boozer. Some of the supporting cast may not look as good but are passable. Freakers look disturbing, though you’ll quickly notice a lack of variation in their looks. Days Gone looks good, but it does suffer from performance issues. While the framerate holds up well in battle, it doesn’t do so well while traveling throughout the world. Expect to see lots of noticeable drops when exploring atop your bike. The game also suffers from quite a few visual bugs, such as texturing loading issues and even enemies clipping through geometry. These issues mar what is otherwise a good looking game.

Like the winding roads of Farewell Wilderness that contain both serenity and danger, Days Gone is a journey with a winding range of emotions. Though the game borrows heavily from other open-world games, Bend Studios has done a solid job melding it together into a package that’s more than the sum of its parts. The story, while lacking major surprises, is filled with enough emotional beats and a robust main protagonist that elevate it beyond all the clichés. The bike and freakers add intrigue to the open-world formula, and the stealth and melee combat create satisfying gameplay opportunities. The game does hit a few snags with its gunplay, bike maintenance and performance issues, but overall it comes together well. There’s no denying that Days Gone borrows heavily, perhaps too much, from other games, but Bend Studios manages to weave all the components together into a compelling product. There are a few bumps in the road, but Days Gone is still worth the ride.