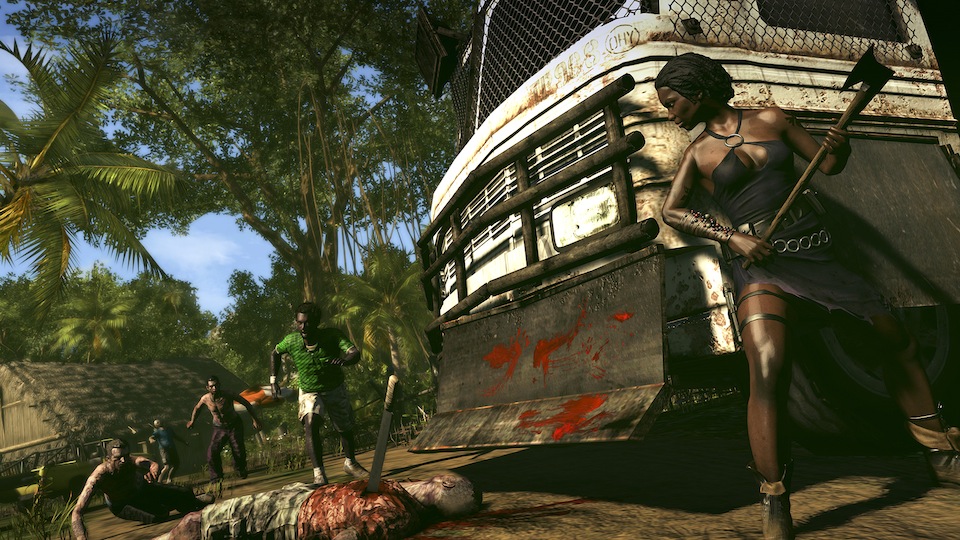 Another day, another zombie. While the vampire fad dying was inevitable, zombies being the thing to replace it was hard to predict. Now the zombie fad has turned into a bonafide trend, lasting long enough to spawn not one, but three Dead Island releases. Of course, one of the titles was the “Game of the Year” edition that begged the question of “In what universe was Dead Island Game of the Year?” But therein lies the problem with sequel Dead Island: Riptide — the failure to realize that the original was, while fun, a heavily flawed release and not something to be championed. Because of a refusal to stray from delusions, we’re not treated with a proper evolution of the game, but a quasi-expansion pack that wallows in the same woes of the first mediocre outbreak.

Riptide takes place directly after the events of the first game — and we mean that literally — so if you’d like a fresh experience, be advised to stop reading here and probably choose a non-derivative game. All of the survivors made it out of the island of Banoi and onto a helicopter flying to safety — or so they thought. Instead they land on a ship that has been commandeered by an evil g-man who’s, stop us if you’ve heard this one before, hellbent on harnessing the power of the virus. After a shipwreck (“!@#!. It’s Rock,” a character monotonically states as the ship falls to pieces), the survivors end up on a tropical paradise. But there’s a twist — this island…has zombies. Show me a man who saw that coming and I’ll show you a liar. Now after a rigorous island escape that defied all odds, the characters have to do it all over again. And that’s Dead Island Riptide. 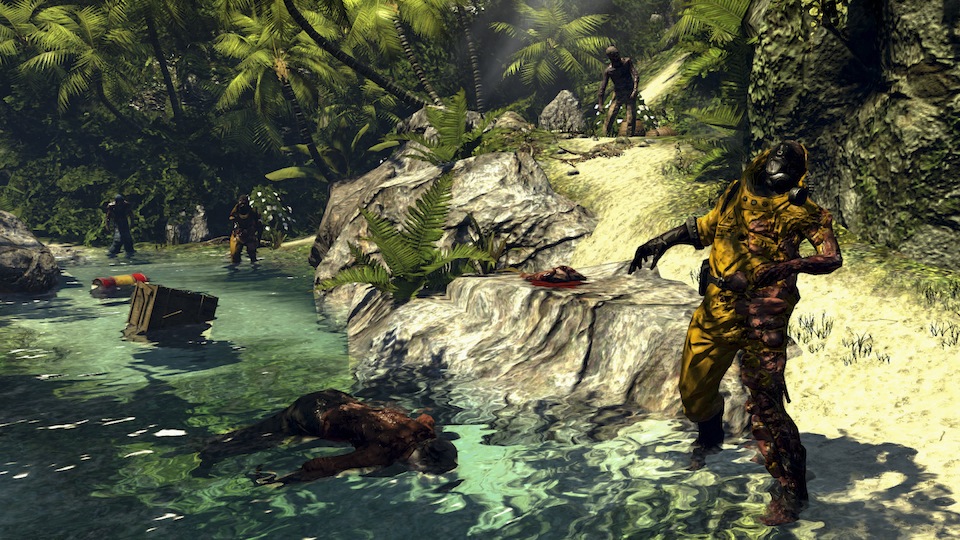 Oh, there’s still 600 words to fill? Right, let’s talk about the characters…who are exactly the same as the first game plus one. There’s Logan, Purna, Xian, Sam B and now John who inexplicably shows up and develops an instant rapport with a group. One issue I had with Dead Island was the stereotypical characters of the motley crew and that hasn’t changed here. You can choose between a cocky redneck, a wannabe gangster, a hotel employee and an ex-police officer, with the addition of another redneck. When I play a multiplayer game that’s meant to sink hours into, I like to at least remotely identify with one character, but yet again that’s impossible to do here. While it’s commendable that characters from the first game can be ported over, adding some diversity would have been refreshing.

Same as the first game, Riptide is an open world island infested with zombies that challenges players to complete a series of quests to make it out alive. If simply killing zombies or riding around in a jeep…killing zombies…is more your speed, that’s accommodable as well. Regardless of the path you choose, however, the game boils down to beating the bejesus out of zombies thanks to a series of fetch quests. While infrequent fetch quests in an MMO or online adventure game isn’t a crime, there’s far too many here that have you go out far too long of distances. A quest might simply be getting a piece of wood to help heal a man, but may take twenty minutes simply because it’s conveniently on the other end of the island, ensuring they’ll be a trail of undead in your wake. 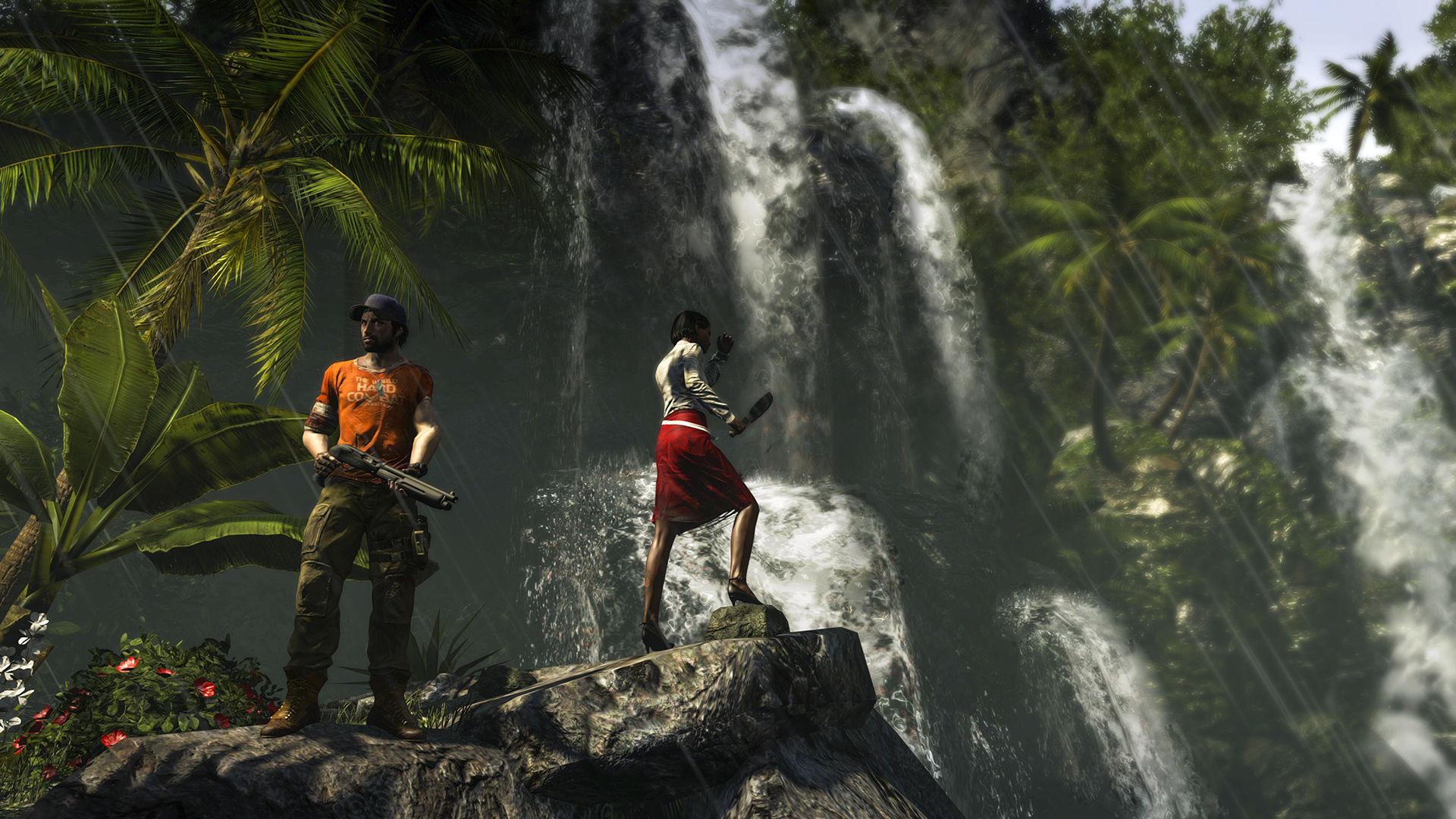 Of course, beating the living dead out of zombies isn’t necessarily a bad thing and quite honestly that’s squarely what Riptide aims to deliver. Enjoyment of the game is entirely dependent on if you find the aforementioned activity of zombie bashing entertaining and have dedicated friends to play with. While single player is supported, the constant mob of zombies meant for a larger group makes it difficult and frustrating throughout and sucks most of the fun out. Unfortunately, those without friends interested in the game will have a tough time as, while there’s fairly seamless drop-in/drop-out online multiplayer, randomly banding up with people can prove challenging. A headset is practically required to effectively play with each other and it’s a frequent occurrence to get teamed up with a mute. As such, the only realistic way to play the game is to convince your friends to get the game and play through the whole experience with them.

If this can be accomplished, however, Riptide can be quite a fun experience. Everybody strategizing before entering an area or being suddenly overrun by a herd can be enthralling and addictive. It’s the sort of game where you could look at the clock at 2 AM after a supposed hour-long session and have no idea where the time went. The issue then becomes boredom of the basic combat mechanics sinking in after awhile — especially for those who experienced it all the first time around. 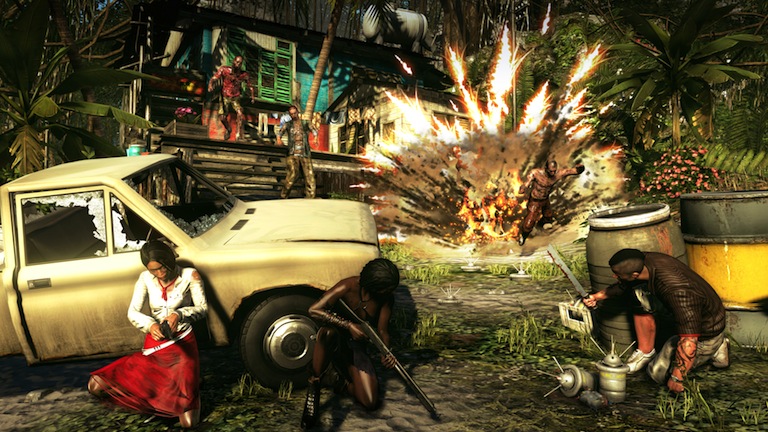 Dead Island: Riptide is a game where enjoyment hinges entirely on personal satisfaction of repetitively killing thousands of zombies and having friends with the same passion. For these select people, Riptide can be a whole lot of fun; but for anybody going it solo or demanding more from a game than just mindless violence, however, it will prove increasingly tedious. Much like the first game, there’s elements in play giving it depth and appeal that are never honed in on thanks to the commitment of sending wave after wave of zombies at you in an utterly generic (and sometimes glitchy) way. There’s a chance for the Dead Island series to become an addictive online experience, but the developers have to admit and work on their faults and not ignore them as they did in Riptide.