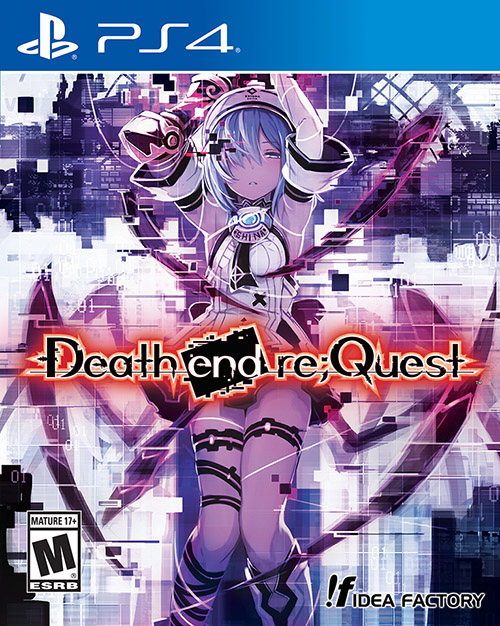 At some point in our lives most of us, as gamers, thought it would be nice to get transported inside the world of our favorite video games. As fun as certain game worlds may be to enter, once we examine this premise with more critical thought, it quickly becomes obvious that living in a game world might not be all we hoped for. Mainly since they tend to be populated with entities that want nothing more than to kill us. This is the case for Shina Minoniya, a developer for virtual reality MMORPG World’s Odyssey. Shina disappeared a year ago and has awakened inside the game that was never completed. She is found by former associate developer Arata Mizunashi but she has no memory of the previous year. It’s believed she can get out of the game world if she can get the perfect ending, which has a one percent chance of success, which is a daunting challenge since by her own estimation World’s Odyssey’s basic campaign is roughly fifty hours.

Such is the plot of Death End re;Quest. The player shifts between Arata and Shina as they try to complete the game within a game. The identity crisis Shina is going through in the World’s Odyssey server and the real world is comparable to the identity crisis this game has. The portions that focus on Shina are done as a JRPG while when we go back to the real world as Arata the game turns into a visual novel. For their respective genres, Death End re;Quest does a good job at delivering a quality JRPG and an interesting visual novel, but the two styles don’t blend together as well as one would hope. Depending on which genre fits your preference, it’s like playing a game you want that gets interrupted by having to play a different game. 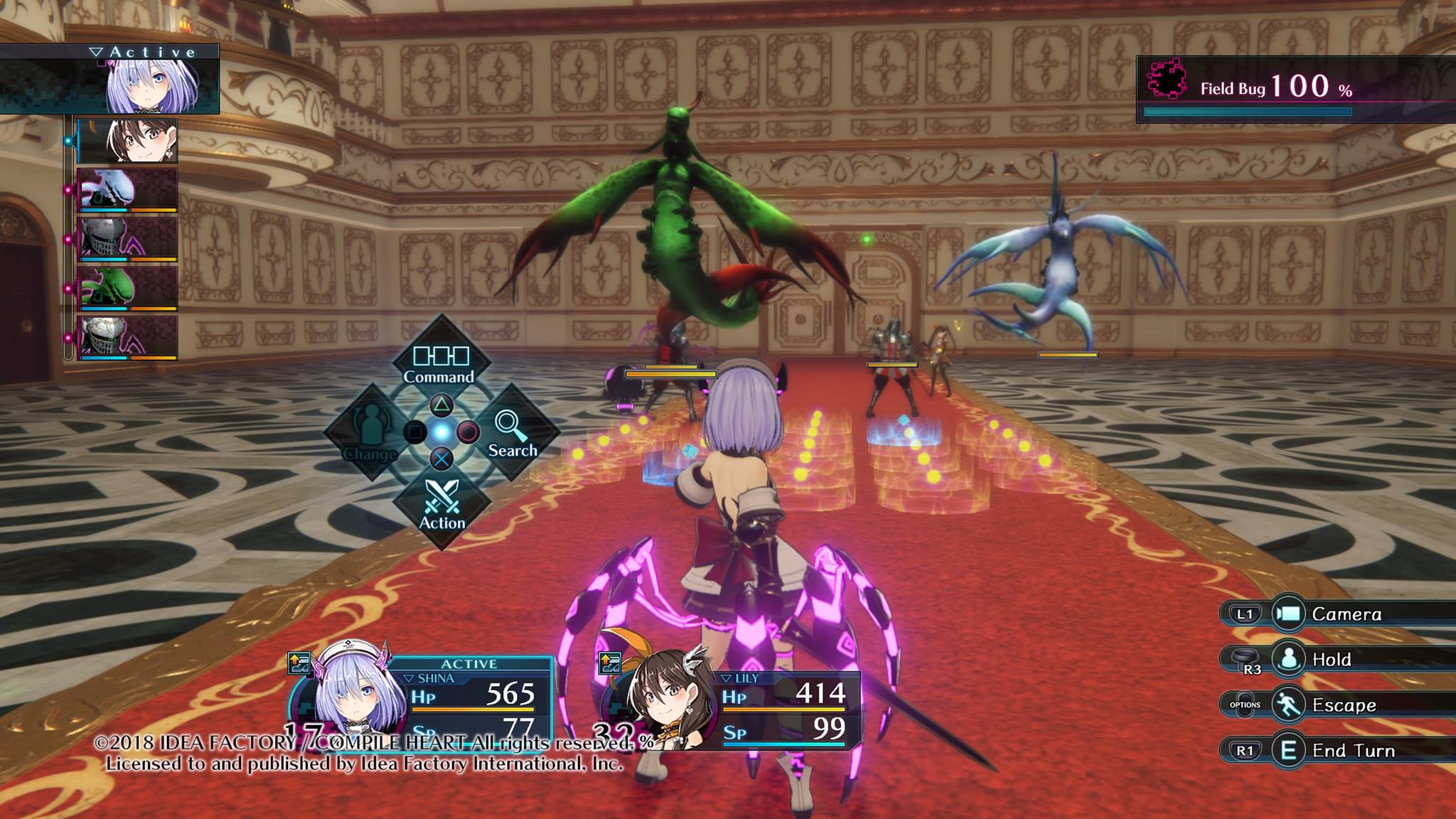 The genre combination is a mixed bag. As a narrative device it works well. Shina is stuck in the game server so her segments consist of JRPG dungeon crawling while Arata functions as tech support in the real world. Shina gets stuck because of a bug in the game, Arata has to go find some link to the bug in the real world to patch in the repair so Shina can progress. Because Arata’s tasks are much more mundane in nature and no real combat is involved, it makes sense for him to be in a visual novel format. The downside is it can feel like you spend more time watching the game than actually playing, which is especially true in the first couple hours.

Both segments of Death End re;Quest are good for what they are. The story penned by Makoto Kedoin, writer for the Corpse Party series, so things can get rather dark. The visual novel portions of the game do unfold at an interesting pace thanks to the writing with music that helps sell the mood and set the tone for some dark mysteries unraveling. Shina’s portions in World’s Odyssey is among some of the better JRPG gameplay we’ve seen from Compile Heart/Idea Factory. 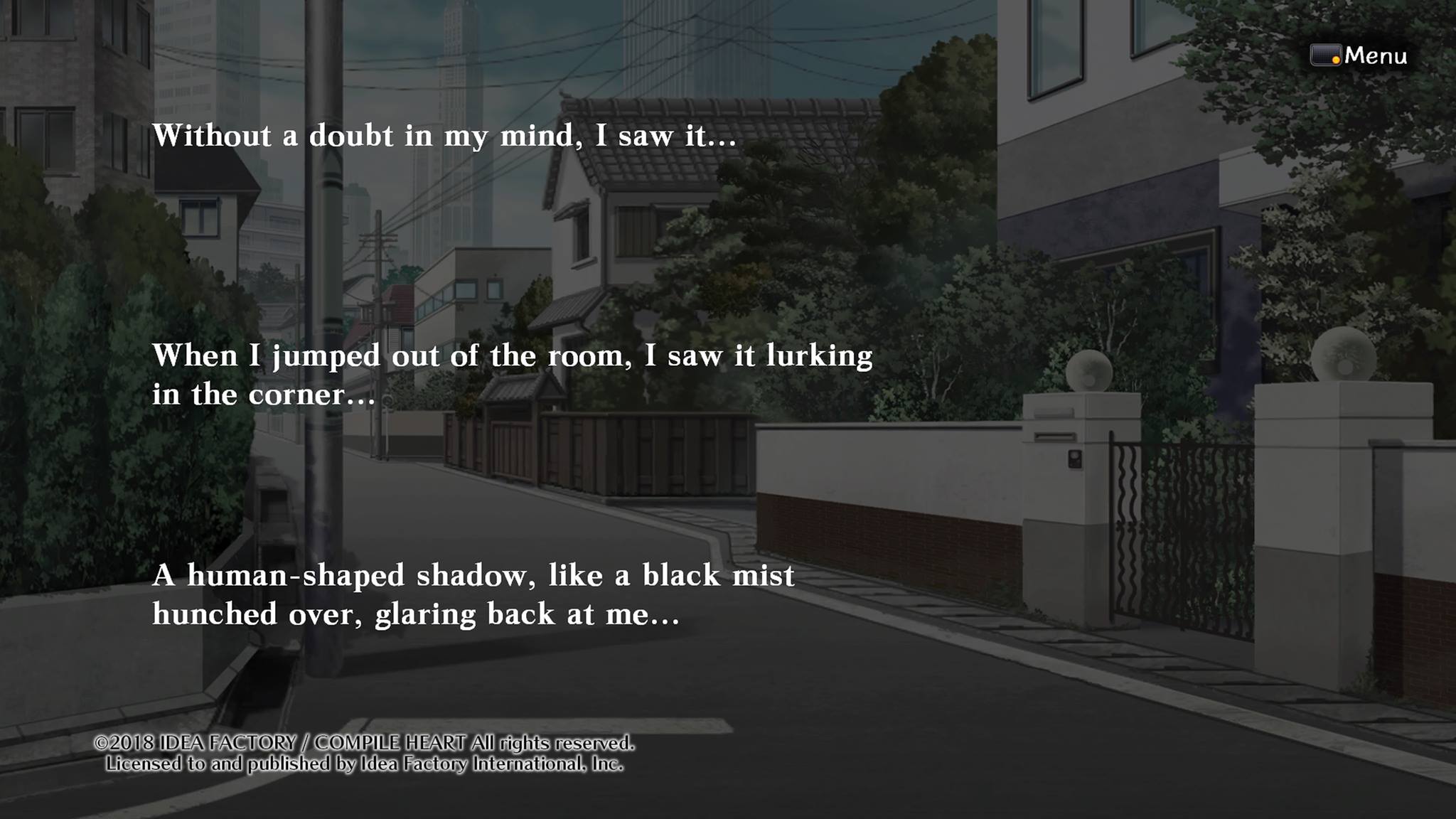 Combat is fought in a standard turn based JRPG format with a couple twists. The player can move their characters around the battle to attack like they did in Fairy Fencer F but this system has advanced since then. The characters are able to take three actions per turn. Using special abilities in succession can sometimes unlock new and better abilities but that’s not the real fun of battle. How the character is angled against an enemy matters because if they do three consecutive attacks they will do a knockback. This makes combat a lot more fun than garden variety JRPGs since this gives battle an element of shooting pool. Knocking an enemy into a party member can result in a tag team attack that can inflict extra damage. The enemy can also be knocked into a wall to incur more damage, hit other enemies to move them around and damage them and also take out some of the bugs on the floor. The downside is after the players gets deeper into the game battles are artificially extended due to enemies having a ridiculous amount of hit points and counter attacks.

The bugs on the battlefield add another layer of complexity to the game. The bugs are spaces on the invisible battlefield grid that serve a few functions. Walking on most of them will damage the player but also increase their corruption level. Knocking enemies over them will inflict damage on them and also clear the bugs from arena, making more room to move to the player. If the amount of bugs gets under fifty percent, Arata can assist with battles and mix up the genre even more by adding puzzle or shooter gameplay elements. The player can also gamble with their characters corruption levels too. Getting a character up to eighty percent will cause them to go into glitch mode, which is basically making them virtually naked and making them ridiculously powerful. Getting the corruption up to one hundred percent results in death, so tread carefully. 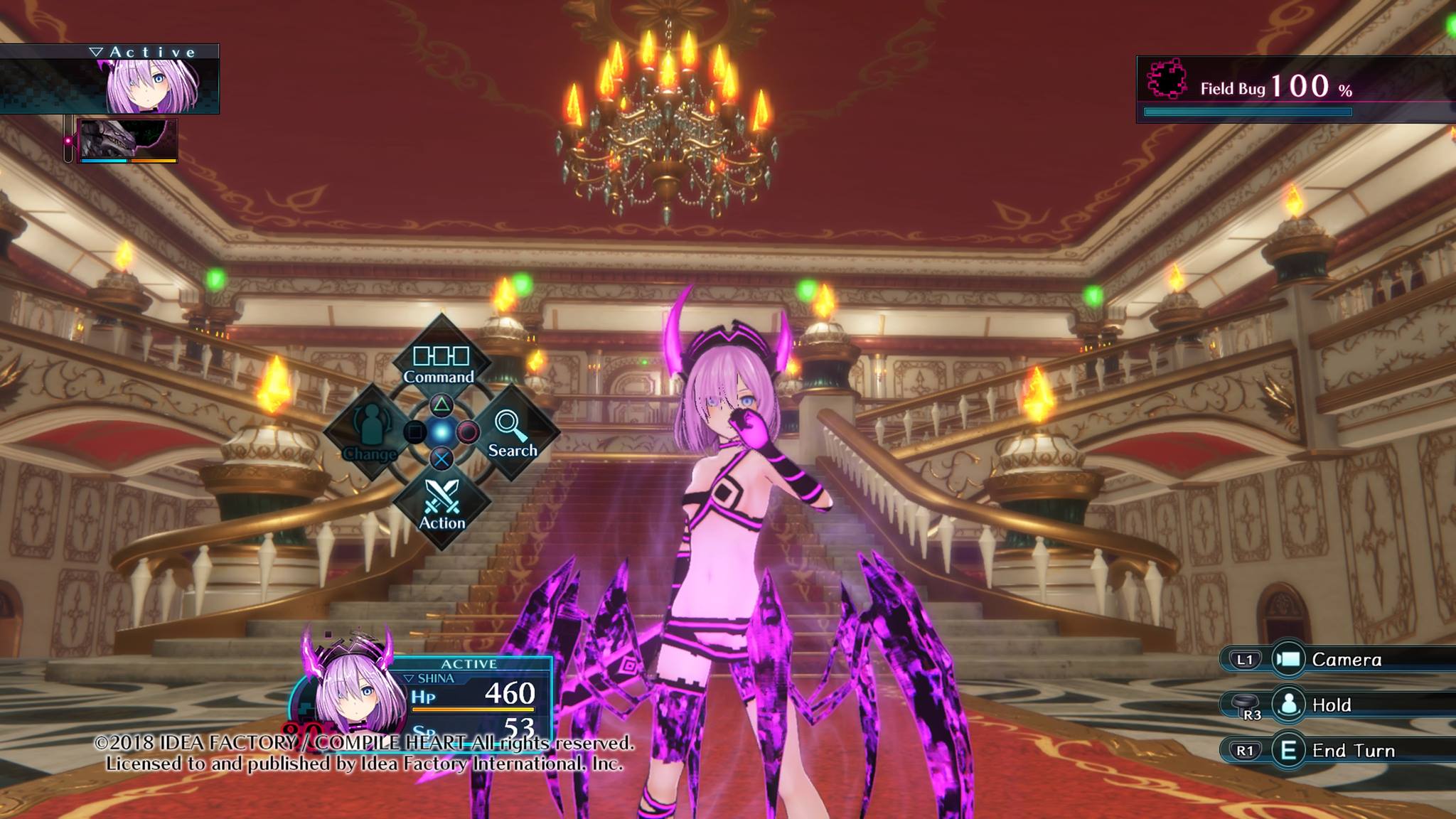 Getting the true ending of Death End re;Quest is a task not too far removed from the task that Shina faces in World’s Odyssey, namely because it cannot be achieved on a single playthrough. Despite the quality writing, sitting through some of the lengthier cutscenes once was a bit of an endurance challenge, so going through them again might not seem like the most enticing prospect. Also, in order to unlock every possible scenario, there are several instances throughout the game where the player is forced to make a choice. One choice advances the game, the other results in death and for the sake of completion it’s recommended to take death first, resulting in loading the save and going through that particular sequence again.

The graphic design of Death End re:Quest is typical compared to other Compile Heart games. The anime character designs are interesting but look like they could have come from any number of their previous titles, which could also be said of most of the enemies. An interesting touch that helps make the game’s imagery feel unique are the graphical glitches that appear in the World’s Odyssey portion. There are some memorable music tracks, particularly in some of the scenes in Arata’s sections. None of the technical aspects are particularly exceptional, but good enough to make an enjoyable game. 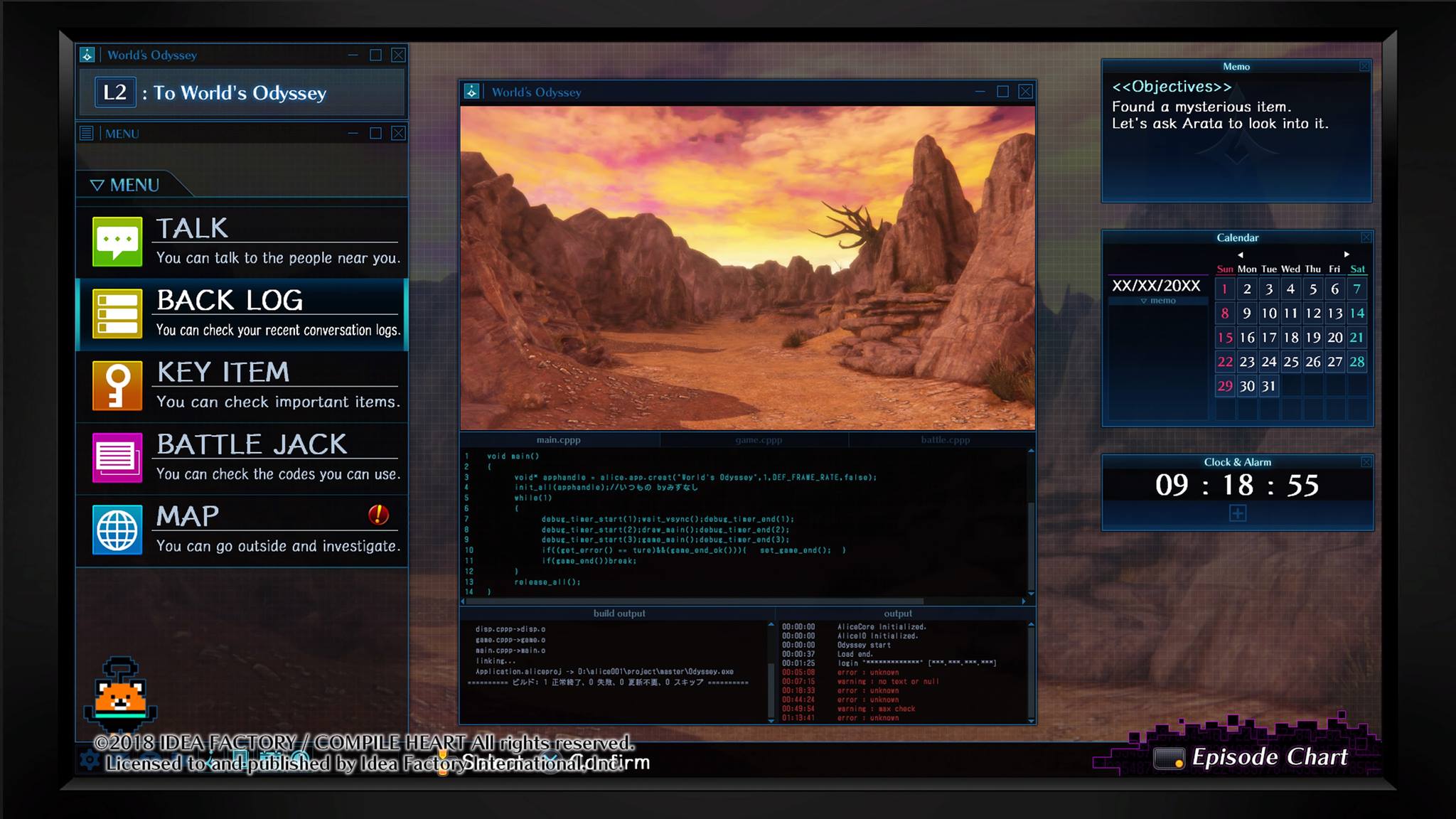 Death End re;Quest combines a well-constructed JRPG with a visual novel that results in an experience of varying quality. The two different game styles do work well for narration and serves as an interesting vehicle for the interactions of Arata and Shina. The flip side is to get the most enjoyment out of the game you have to be in the mood to play both a JRPG and visual novel, and during the review I’d often find myself waiting for one style to end in order to get back into the other. There are moments of tedium in Death End re;Quest, but there’s a compelling story and entertaining gameplay as well. This title doesn’t always shine, but there are flashes of brilliance when it does, in particularly adding a pinball-esque mechanic to battle. Imperfections aside, this is a worthwhile game to look into, especially for fans of other Compile Heart/Idea Factory games.