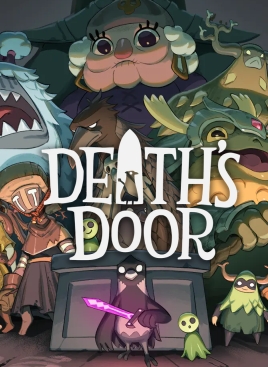 Last year, I thought to myself that I was coming across a lot of games that were dealing with death in one way or another, be it Necrobarista, Spiritfarer or I Am Dead. I figured it was just another one of those weird coincidental trends among the indie game circuit that someone like me tends to come across when you eventually play so many indie titles. But that was a trend of 2020 and I wasn’t focusing on it again this year (as the new coincidental trends are introspective road trips and time loops). So I was taken by Acid Nerve and Devolver’s latest title Death’s Door, which upon first glance might come across as a silly yet intense and fun-looking action title, but ended up being a great soulslike with a surprisingly-emotional core at the center of it all, and yet another amazing game about death.

Death’s Door sees you playing as a small, adorable and seemingly mute crow, and like all other crows in this world, they’re tasked with being the reapers of souls. But one day during a reaping of a high-profile target, the soul is snatched and carried away by an older, larger, more desperate crow who needs a soul to reap as well, who leads our hero to the titular door and tells us that the soul is now beyond it and the only way to open the door is to bring it three giant souls from across the land in order to force it open. Things begin to get more complicated, however, when we realize that nothing in this world dies anymore, which causes souls to become corrupted. Not to mention our dreary workplace at the Hall of Doors seems to be understaffed, and there are hints that our boss, the Lord of Doors, may be up to something shady… 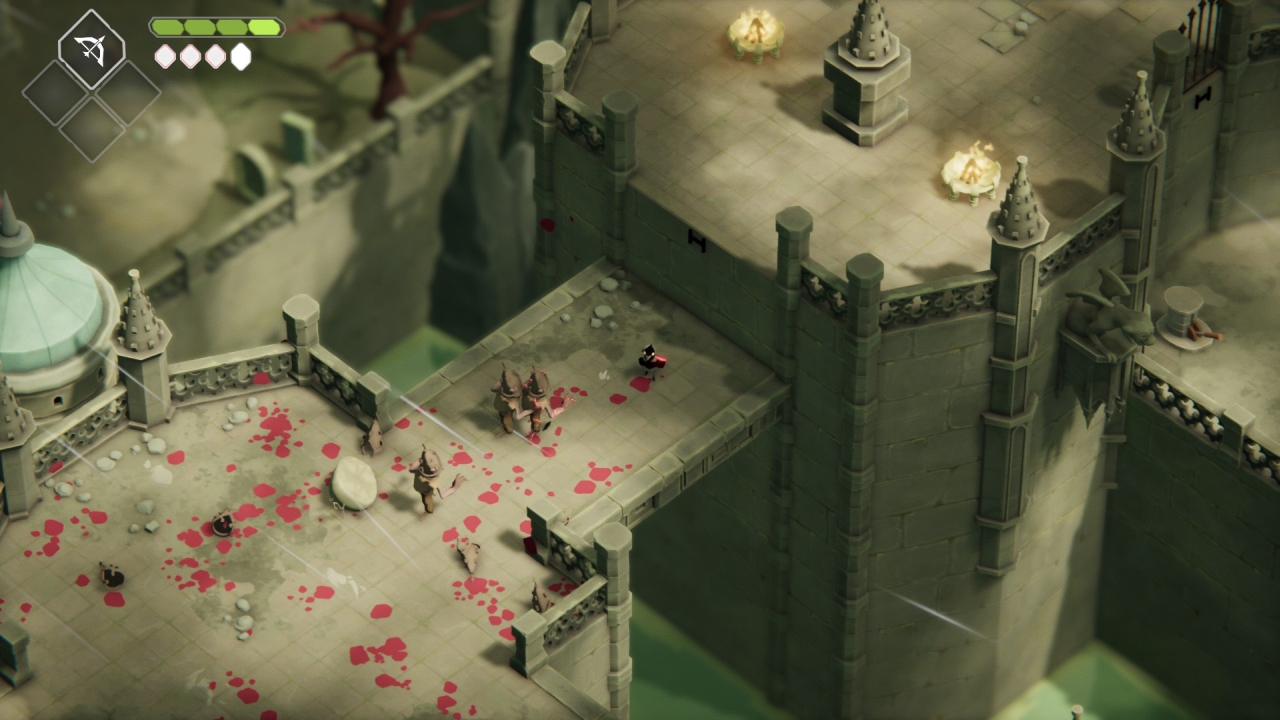 I did a hands-on preview of Death’s Door less than a month ago, but I admit I held back on details because the game was out relatively soon and as the preview covered about a good quarter or third of the game, I didn’t want to go into anything that might spoil the magic. In hindsight, I feel that might have been a mistake, if only because I didn’t do the game justice by sticking to the basics. So this time around, I’m not holding back. For starters, the top-down soulslike/Zelda-ish combat. While some of the flaws mentioned back then about it still apply, such as certain moments where it can feel button-mashy or the charged melee attacks seeming a tad useless (if only because I put less points into the upgrades that would allow them to charge faster, but still, I ended up beating the whole game without using them), there’s no denying that it’s still a lot of fun.

The dodge rolls, the slashes, the magical blasts that recharge with more successful slashes, the upgrades like bomb blasts or fireballs…one might argue these are par for the course, but it’s hard to stress just how good Death’s Door makes it all feel, with all of the action being as smooth as butter. This is especially evident during the final areas leading to each boss, which are basically entire gauntlets of enemies and obstacles to make it through, whipping your way through them in an attempt to reach the end or at least unlock a shortcut that you can use after you die. It’s nice, intense, has a perfect level of challenge, plus a good variety of enemies to duel. Some are rather imposing beings clad in armor that can hit hard, while others are mages of sorts that can cast from afar, but all of them are fun to battle.

Going back to the parts about shortcuts and dying, though, one of the notable twists is that each time you die — and you will die — you’re transported back to the last Reaper Door that you activated or used. These are the crows’ main mode of transportation, and you can also use them to head back to the Hall of Doors – basically the game’s hub area – in order to instantly refill your life, use soul energy gathered from enemies or founded in masses around the world in order to purchases upgrades or fast travel to different locations. But be it death or travel, every time you use a door, all of the enemies in the world respawn. Needless to say, this can make traversing back to where you were rough, so at certain points along the path, you can activate ladders, open doors, blow up stones in the away, etc, and those changes will be permanent. They not only provide little goals which each gameplay portion, but also provide a nice balance to things as well. 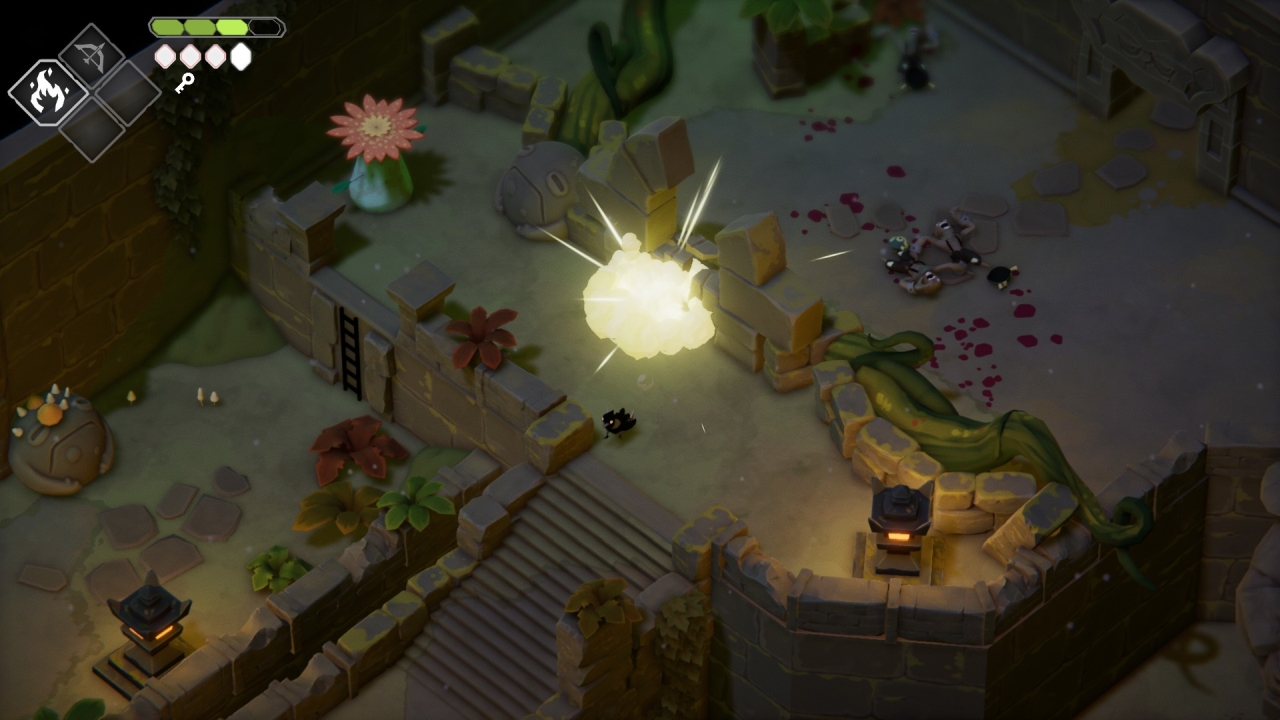 Also included to provide a balance are what may as well be this game’s version of bonfires, which here are various pots of soil that you find along the way. You put a seed in one and it grows a fruit to eat that refills all of your health. The catch is that not only do these fruits not regrow until door use, alongside enemy revival, but that there are also a finite number of seeds in the entire world. So like the ink ribbons in the older Resident Evil games, the intent is to have you carefully manage this resource that you need for vital gameplay purposes, as you’ll never know when you may need one…well, emphasis on “intent.” In execution, maybe it’s just a result of me exploring every nook and cranny, but there was never a point where I was without seeds. Every time I came across one later on, I would always have a good four or five of them on me. So it’s a unique idea, but maybe the seeds could have been harder to find.

As mentioned, though, I was exploring a lot in Death’s Door. There are the “Shinies,” the standard collectibles with bits of lore, which range from compasses to teddy bears, but then you also have more soul energy, temples that provide shards that can eventually extend your life and magic once enough are collected, and even new weapons, even if there are only four optional ones to find. And they do know how to tantalize you into hunting for secrets. So many of them are just hiding in plain view, but it’s finding the route to them that’s the challenge. It helps that you’re just going to want to see a lot of this world in general. The visuals are rather striking, utilizing a nice, stylistic approach and a terrific variety of color palettes, somehow finding this weird yet perfect mixture of the bleak and the vibrant. The various details, landscapes and architecture are also a delight, ranging from majestic palaces to flooded ruins. Everything on display here is an eye-popping delight, but the best of all are the various characters you meet along the way, be they friend or foe. Acid Nerve were apparently inspired by Studio Ghibli a lot when it came to Death’s Door and it does show. 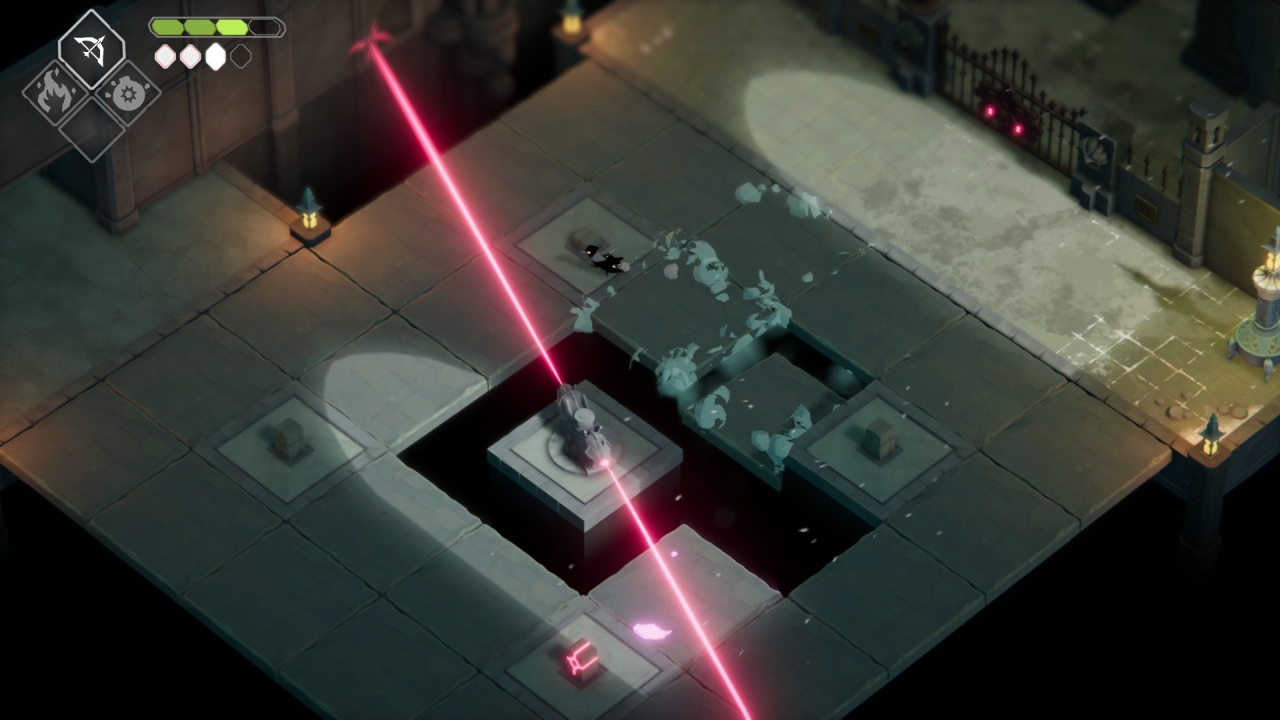 To say Acid Nerve got imaginative with the characters here would be an understatement. Adventurers cursed to have soup pots for heads? Check. Masked bards that will gleefully try and chronicle your adventures in song? Check. Totally human chefs that are not just squids propping up corpses and serve you food and hints. Check. All of them have perfectly-distinctive looks, twisted and whimsical bits of fantasy that wouldn’t feel out of place in a Ghibli film. Heck, even enemies like boomerang-horned trolls of sorts or even common spiders stand out. It’s astonishing just how much personality these characters and this world radiate just from looking at them.

Of course, the characters you encounter have personalities through their dialogue and actions as well, with all of their individual quirks shining through. There’s a lot of humor to be found in their words, even when some are outright threatening you. But while a lot of the characters and writing are quirky and humorous, Death’s Door doesn’t shy away from deeper stuff, and this is where it reveals  impressive storytelling that can easily keep you hooked, especially as you advance closer to the end.

Throughout the game, characters will basically reveal different ways they deal with or loss. Some desperately want to extend the lives of loved ones at any cost. Others feel they need to finish certain goals before moving on. Others, though, may be fully aware that there’s a balance to be maintained. One of the main themes in Death’s Door is how death is nothing to necessarily be feared or celebrated, it’s just a natural part of life, and so death means a lot to people in different ways. And it’s a message that even when sandwiched between the more comedic bits is expertly communicated. 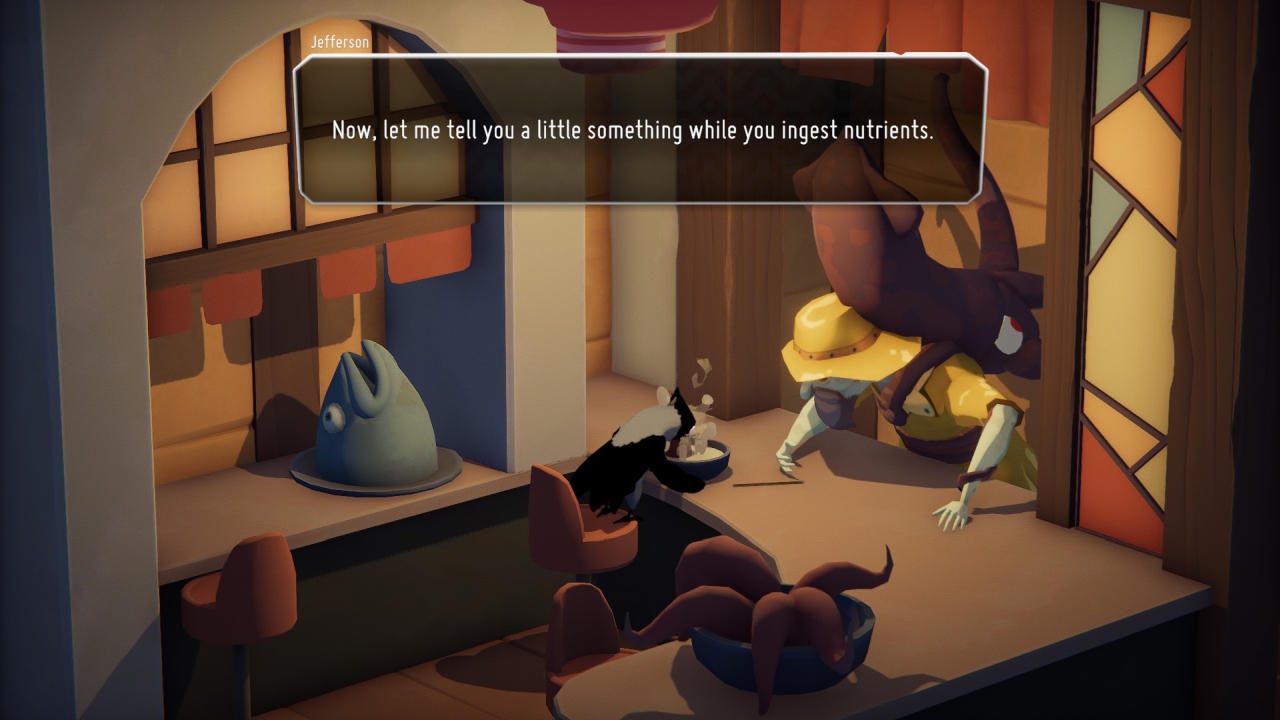 In particular, one of the most memorable things in this game are its boss battles. Well, the obvious reason why they’re memorable is that that they’re fun and challenging, seeing you go up against massive beings that put up a good fight without ever being hair-pulling, and who encourage you to figure out the best tactics that work for you. But what stuck with me is how after each one, the gravedigger, Steadhone, would appear and deliver a eulogy. They would remind everyone that these people had many names, what their flaws and virtues were in life, how some feared them while others loved them, and concluding with the deceased being at rest now and asking that we bow our heads in remembrance. It genuinely feels touching each time.

The kicker, though, is that the game never provided any achievement for defeating a boss. In fact, I don’t think there are any achievements for killing enemies at all. It stands out because the game doesn’t give us a badge or honor for defeating anyone, but it never tsk-tsks us or says that we should feel bad for what we’re doing or just did. It’s all just death, a natural part of life, being returned to a world absent of it. It’s a subtle touch, but one that drives home a point of the narrative in a way that feels clever and impactful. But of course, if that’s too somber, then you can always just go back to the Hall of Doors and giggle at Agatha’s obsession with typing. Death’s Door expertly blends levity and dramatic bits without ever experiencing mood whiplash.

And while it’s easy to see how the visuals evoke the likes of Studio Ghibli, the narrative has heavy traces of influences from it as well, nicely mixing them in. After all, the ultimate goal of the game is ultimately to restore balance to nature, fix an anomaly that is corrupting the bizarre inhabitants of this equally bizarre world. You can even see nature returning more and more as you plant seeds for health, with forest spirits popping up at pots afterwards, bringing more proper life to these words again, even occasionally showing up in the Hall of Doors later. So when you think about it, one could easily claim that Death’s Door is a mixture of Dark Souls and Studio Ghibli, which is a match made in heaven for many. 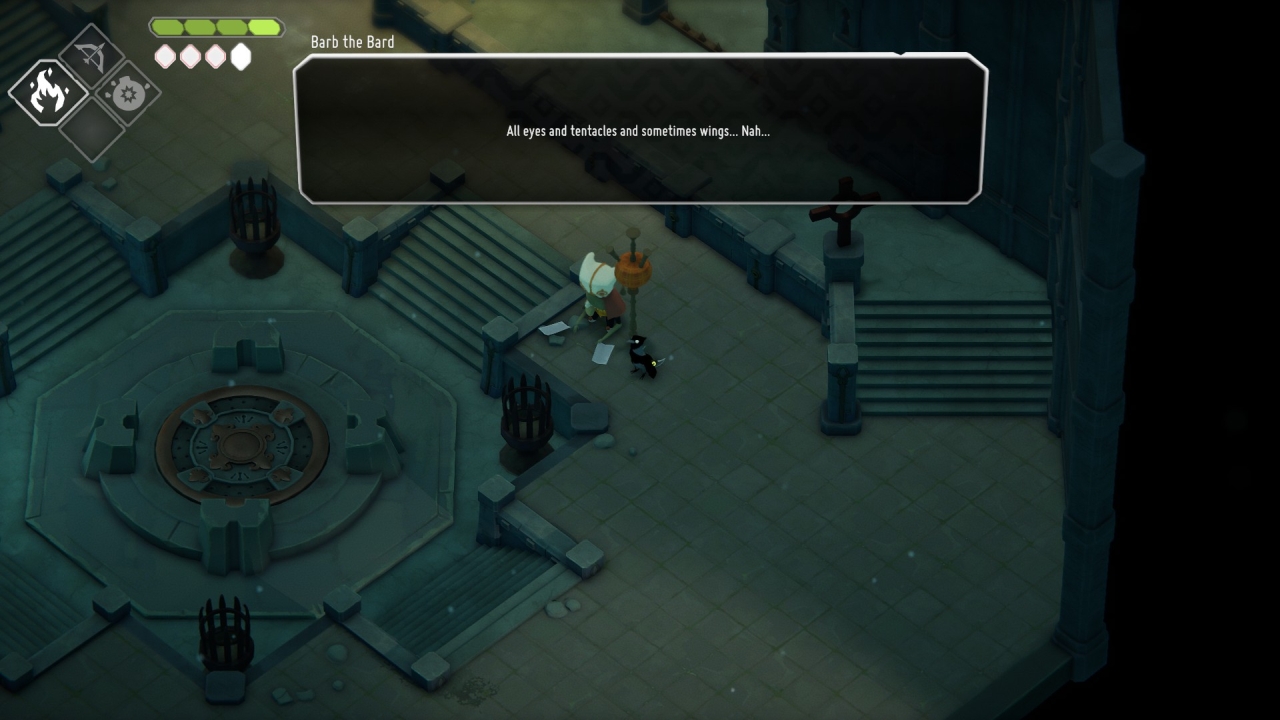 Death’s Door is a gem of a soulslike game with a nice and meaty level of challenge and a world filled with lovable characters and loads of secrets to uncover. It may seem minor compared to most in the genre when it comes to length, clocking in at around ten to twelve hours, but it will be one memorable journey. Come for the charming little crow and the colorful cast that they meet after slicing and dicing a few dozen monsters, stay for the excellent writing and the superb tale about death. It’s all to die for.