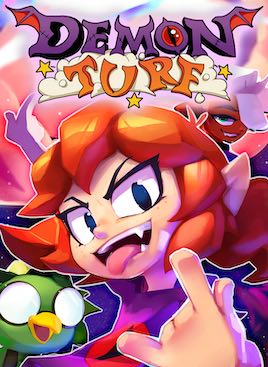 As with any genre once niche in status and/or formerly dormant for so many years, it doesn’t take long to catch onto what legacy new releases are hoping to evoke. Much like shmups and even the Metroidvania itself (for blatantly obvious reasons), the history of platformers — or to be more specific, good platformers — that these games owe a debt to is a concentrated but decorated list. A period from the mid-90s to early-2000s where platformers were, if not front-and-center, a genre many developers and companies would attempt, but few would truly succeed on. A genre the likes of Nintendo, Rare, Naughty Dog and even Insomniac would once delve into with only one of the aforementioned continue to pursue it to this day.

While it would be easy to make this a more generalized sentiment of the game as a whole, it’s precisely during the first round of stages to Demon Turf, where developer Fabraz’s homage — or at the very least, their fondness — of Nintendo’s work especially is easy to spot. And I’m not just talking about the ample floating spots of safety amid a skybox void, where levels are orchestrated much like many a “challenge room” you’ve no doubt come up against in any 3D Mario game. But it was at the point of coming up against an ascending assembly of rotating blocks, capped off by revolving arrow-shaped beams where the initially-nostalgic gleam of a game like this soon morphed into something more resembling a replicant. To the point all that was missing a certain jingle or two and the facade would’ve been complete.

Without making too much of how striking a resemblance some of Demon Turf‘s levels look and feel here — and how they so specifically and oddly remind you of particular levels spanning Nintendo’s entire 3D history with their beloved plumber — the flip-side to all this is that Fabraz’s efforts mostly fel authentic in their approach. That this isn’t just a lazy copy-paste attempt — a clone minus the soul. Better still: that they manage to encapsulate that same joy of yesteryear. The reason why platformers have such a fond attachment; why crowd-funded projects become a success and aim to revisit former highs with mixed results. But more specifically how even precision-based platformers (because hey, let’s carve that niche into even tinier pieces) can still find in them the ability to stand among the best releases of current time. Demon Turf’s throw-back mentality doesn’t always work in its favor and there are instances of unconvincing implementation in spots, but one thing the game does undoubtedly get right here is in the satisfaction of conquest. 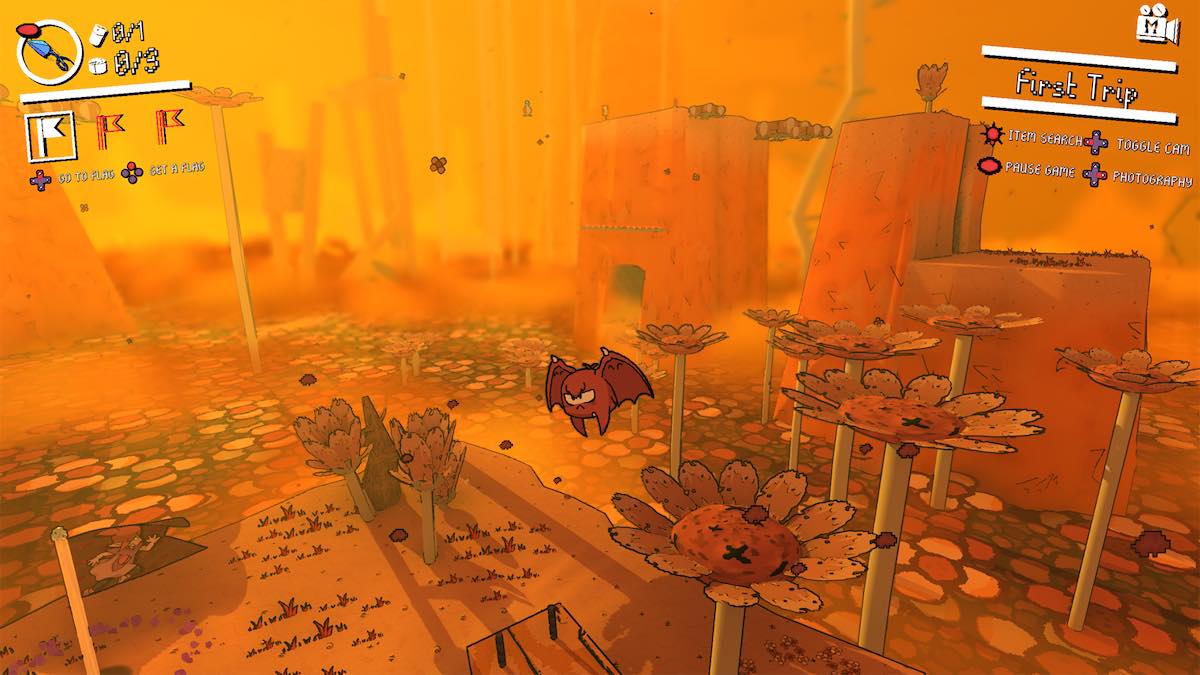 To have finally gotten past that annoying platforming segment or sequence that requires the utmost precise timing of jumps, or correctly-deduced combination of such. Figuring out whether a long jump, a triple jump or simply relying on successive wall-jumps will get you moving again. A set of mechanics that too won’t take long to have you envision playing any 3D Mario game again. The tricks all too familiar in a game that at one point can be so specific with its influences only to then broaden out with a commendable assortment of ideas and challenges to get past. When Demon Turf isn’t bothered with expositing its “hip demonic” setting — a loose rationale for why your character is even strolling through portals and assembling mandatory collectibles to begin with — and the actual design of levels rightly takes center stage is when the game is at its lovably-frustrating best.

Even so, it’s hard not to argue that in terms of meshing its design with its aesthetic, Demon Turf doesn’t convince you that what it’s building or even what it’s aiming for has been fully realized. You needn’t go as far back in the genre to note how a game like A Hat in Time feels a like a far more realized and surprisingly delightful balancing of these two aspects: design and aesthetic. Maybe it’s the chunky, pixelated edges to certain characters or the way, in some instances, giant billboard-like screens offer up an animation whose pixels are even bigger and blockier not to notice. Maybe there’s an intention here, but little of it feels fleshed out or purposeful. To recall Yooka-Laylee once more, the art-style of that game felt more unifying; not to say Demon Turf isn’t at least attempting an identity, but the spacious surroundings and sparse, geometrically-simple layouts don’t allow the style to truly attract. 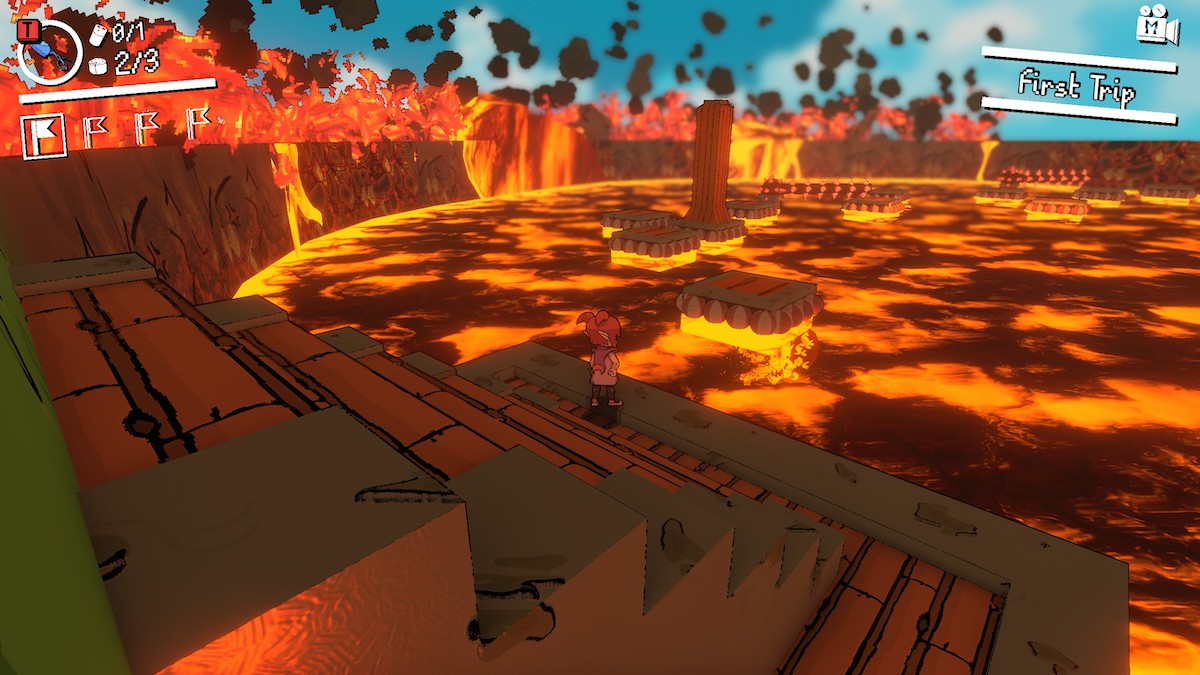 So there’s admittedly drawback to the experience, as fun as the platforming remains throughout. And while some levels do venture into a bit of sandbox experimentation and curiously picking apart the 3D geometry of an environment, most objectives often require the simple (on paper that is) task of making it through an obstacle course-like orchestration of platforms in one piece. Making sure to remember, first and foremost, that checkpoints in Demon Turf are not automatic, nor a landmark already placed by the game. Instead, something you can place mostly anywhere during a level. A lite bit of strategy it may admittedly be, it does at least give players something to think about mid-run when it comes to the inevitability of encroaching failure. Having to restart from a previous point, providing you remember to place a vital flag somewhere down the road. It’s a welcome distraction away from a game generally lacking in environmental detail or essentially much else to entice outside of the platforming gameplay itself.

Clearly has Demon Turf bet all its chips on the addictiveness of its level design and the desire to see that coveted finish line passed. It’s not a resounding win but there’s enough of a [fittingly] devilish manner about the way challenge is curated for these visual shortcomings to be somewhat brushed aside. It’s when Demon Turf does go out of its way to try and shake things up — in an attempt to prove it’s more than just floating isles above a void — where enjoyment of what’s on offer (or the existence of such) is a mixed bag. Detours into modified sections of a level whereby you can’t use certain abilities are brief, but welcome alterations. But it’s in the other more notable addition sadly — namely its combat sequences sprinkled in from time to time — that stands as easily the weakest attempts at variety. The biggest culprit of that easy-to-make mistake on integrating mechanics for the simple sake of shallow variety. A rather repetitive objective being the need to push a certain number of enemies into a targeted spike trap or off a platform entirely so as to progress on. Its mechanics neither deep nor all that exciting to get to grips with. Added to on top by a feeling that combat grinds proceedings to an unnecessary halt by something that is all too clunky and sluggish for one’s liking. Though there’s a small consolation in that its end-of-world boss fights do find a way to improve the formula. Cranking up the requirements and spectacle on show to a sufficient-enough degree, its controls — much like the environments — can fade into the backdrop at the most pivotal of moments. 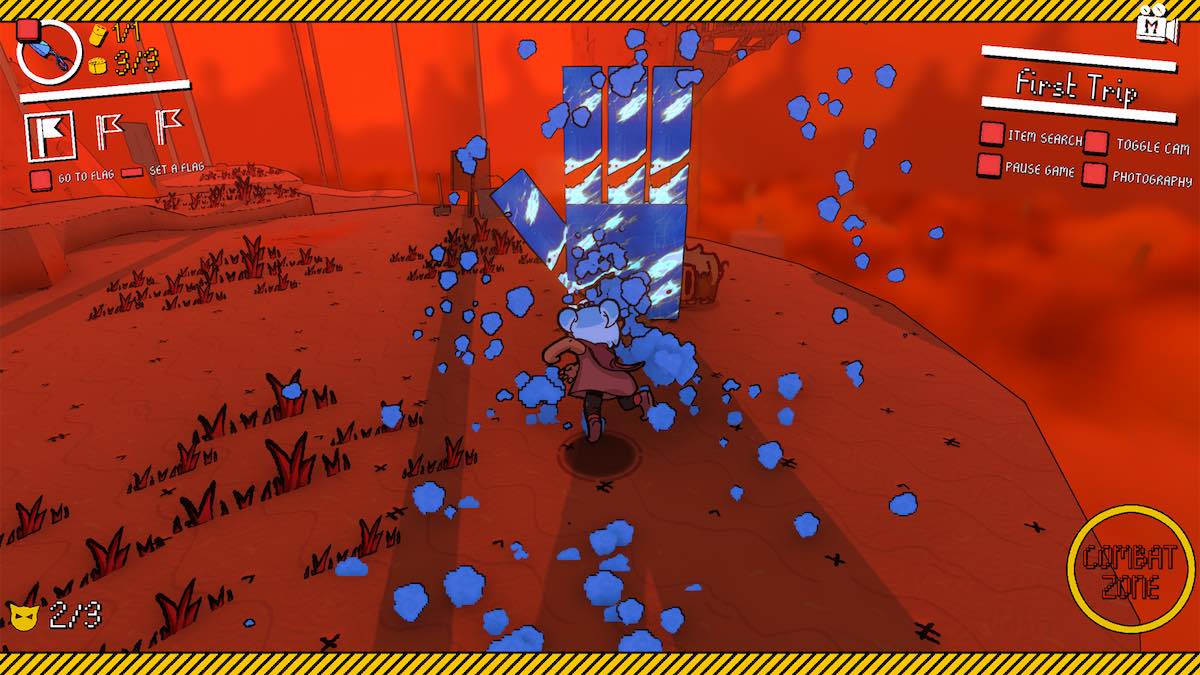 It also doesn’t help that the in-game camera — or to be more specific, certain choices with the way the camera is used — is another problem on top. One that seemingly goes out of its way to frustrate should its odd change in perspective or locking onto a nearby exit at such a low angle, result in you getting hit by an off-screen projectile. An annoyance that only sullies the game’s “one hit” pitch that any sort of receipt of damage, means a return to the last checkpoint. So there are lulls in quality from time to time in Demon Turf — the kind of lull the game mistakenly thinks players won’t be too fussed over or is simply uninterested with rectifying beyond just repeating that same premise so as to, assumably, pad a level’s run-time. In no way aided by the later realization that in order to even have a crack at the final boss means revisiting the already-beaten four world of levels, now in their altered states. Though the game would want you to believe or perceive this as essentially eight worlds worth of levels, the reality is that this is just the same four worlds but with a slightly-altered layout or arrangement of challenges to get past. These latter-half offerings unsurprisingly are too a mixed bag. Alterations that at worst feel predominantly visual alone, but at best do manage to continue the upward incline of difficulty.

If nothing else, Demon Turf‘s optional content — its side activities back in its hub world — are well worth the investment and surprisingly deep with their offerings. And while the temptation of cosmetic alterations to one’s character is entirely a personal preference (there’s little excitement personally in being able to change outfit or hair color), the hunting down of in-game “arcade” challenges in one spot, or tackling levels based on mastering certain abilities, are a much better investment to sink time into. A shame then that outside of cosmetics, the only real attribute to spend one’s collected currency on, are modifiers that can add to or even improve your base move-set. Modifiers that, in all honesty, don’t improve much outside of one that gives you an additional flutter-jump or perhaps the ability to spawn a shield to bounce projectiles. Why would I bother spending currency on combat moves if the combat has already put me off to begin with? There’s even one whose increase to walk speed feels like a convenient excuse to provide a solution to a problem the game has created in the first place. 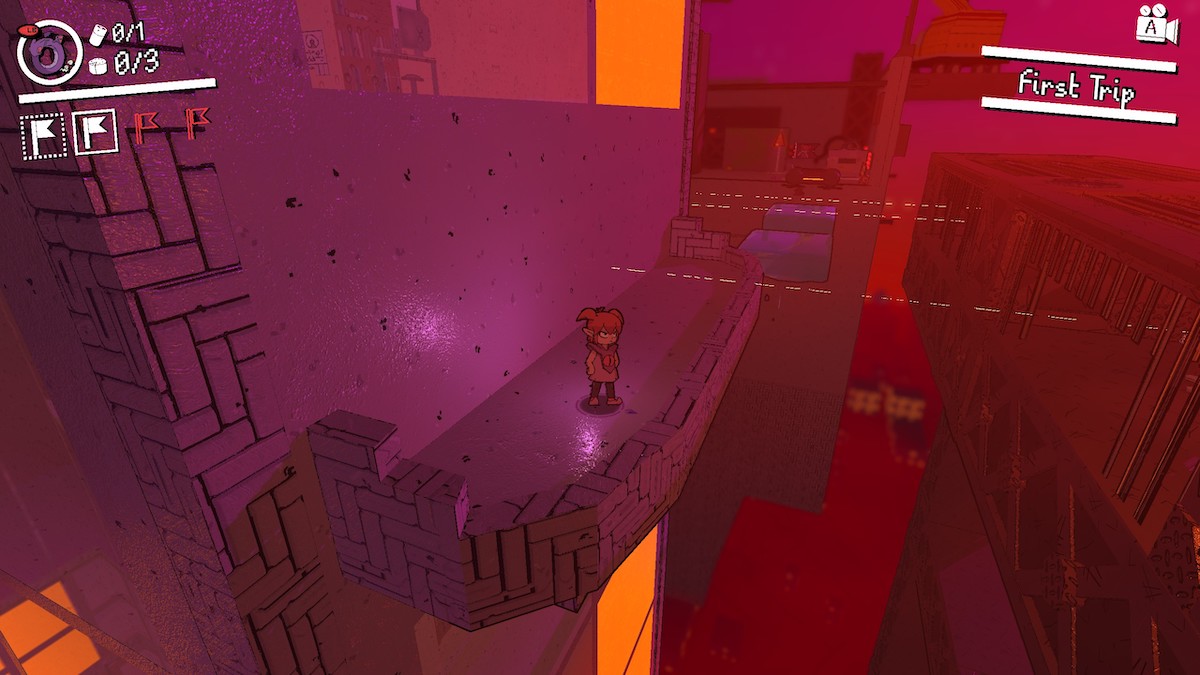 Despite its missed opportunities and ideas that don’t gel with the core gameplay, developer Fabraz’s foray into three-dimensional platforming remains a fun-if-flawed hearkening to the genre’s glory days. By far the studio’s best trait in Demon Turf is in its relentless distilling of what made those original 3D platformers not just a joy to play, but a joy to finally see beaten. There are plenty of tricks on show and when the game allows time for the gameplay to do the talking is when the satisfaction of Demon Turf is at its highest. It’s everything around it that, while not entirely damaging, does sully things on occasion. Regardless, this is so clearly a game crafted with love for the genre, but understanding too that mere nostalgia alone can’t be a game’s only redeeming feature. Perhaps it’s that same insistence on expanding its base and incorporating more ideas than necessary that leads the game to momentary bumps along the way. But even a rough spot or two can’t stop Demon Turf from successfully facilitating demand for a well-crafted platformer sure to test even veterans of the genre.