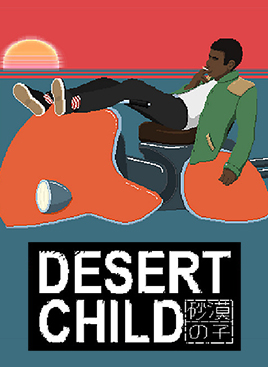 From the outset, there’s nothing inherently wrong about Desert Child’s leaning on the recent fondness for everything futuristically ’80s, imagery and music alike. Even the baffling craze for vaporwave that combines both mediums — that only the internet could help prosper — manages to keep to its limits without ever coming across as desperately pungent. Even with the already-known premise (albeit jokingly referenced) of getting one’s general self, “your ass” included, to Mars, through a series of daring, hover bike races, doesn’t in itself leave the game open to ridicule. And as the recently-released launch trailer has only cemented, sole developer Oscar Brittain is very much open to marketing his project on already-established cultural phenomenons.

Admitting one’s love for all of these isn’t the problem and any sane person wouldn’t deny a creator his opportunity to express his favored palette. The problem is quickly discovering that this starry-eyed appreciation, comes at the cost of a game that not only falters technically and structurally, but as a consequence is so easily dismissive of a player’s willing patience. If you haven’t guessed it already, Desert Child is fairly guilty on both these counts. That’s not to say that the core gameplay loop — and “loop” is a fitting term, which we’ll get to — of shm’up-styled, side-scrolling races doesn’t throw up some interesting ideas or that the game as a whole isn’t afraid of throwing up a curveball with which players must adapt to.

Some of the fleetingly better moments to be had in Desert Child‘s brief four-to-five hour, three-chapter run-time, are getting stopped by the police seemingly out of nowhere and having to fend off chasing law enforcement so as not to have your hard-earned, allotted money taken away. So too, some of the optional jobs/objectives like herding animals (avoiding recklessly shooting them in the process) or delivering pizza, complete with quirky music to match, aren’t without a sense of goofy charm — justified more so in the way they help deviate away from the regular race-to-the-finish standard of most set-ups. But these deviations, whether that still includes shooting at projectiles along the way or not, are sadly few and far between — easy as it is to get quickly disgruntled moreso at how most missions not only follow the exact same tired formula, but worse, are orchestrated in such a way that it feels like the player at point has no control over the resulting outcome. AI that offers ridiculous amounts of rubber-banding is one example, but doing a terrible job at explaining what one is even required to do is a more notable addition. 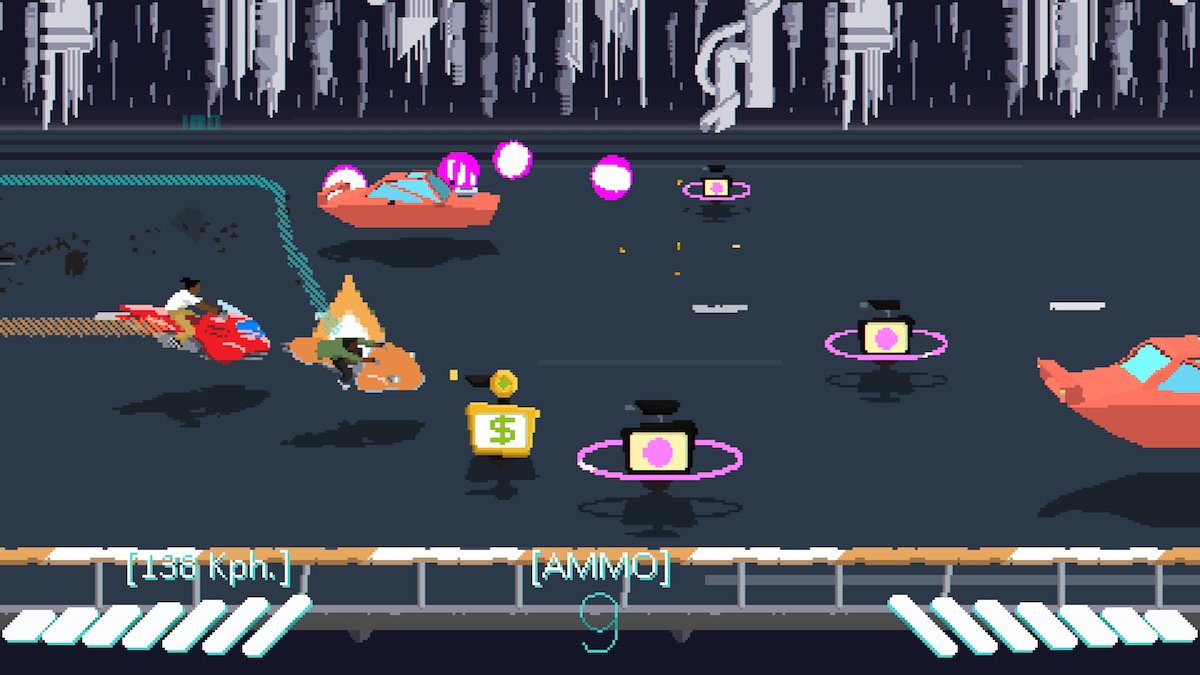 One objective in particular, having you “hack” a bank for money, lacks the simple luxury of an explanation as to how one fullfils the requirements or how it fits within the context of another race-to-the-finish set-up. Instead simply thrusting you straight into proceedings, allowing you to shoot at targets for money, before offering zero explanation as to why one has ended up with a static “[Safe] x 0” image. Truth be told, a large portion of Desert Child‘s main “racing” gameplay is rather ploddingly dull to begin with; no matter how many times you find yourself forcibly repeating the process simply to gather more money. And given players are required to amass $10,000 worth of earnings in order to participate in the final chapter/final race, it doesn’t take long for Desert Child to reveal itself — from out its admittedly pleasant, if not spectacular, vibrantly lo-fi pixel aesthetic — as nothing more than a needless grind of doing the exact same tasks over and over again.

There are of course helpful substitutes such as a bank to deposit your savings (out of fear the police may take it from you if you invest, and fail, in a little too many illegal activities) which accumulates interest overtime. Yet for every ounce of considerate design Desert Child initially appears to offer, comes a similarly occasional annoyance or flawed system that only damages what glimpse of goodwill the game generates. For example, with the very same bank: I can only deposit/withdrawal $10 at a time or all at once, but I can’t input the desired amount myself? Requiring me to (and I kid you not) mash the face button repeatedly in $10 steps. Add to this (the biggest insult to injury in what is a steadily-mounting number of insults) the fact you can’t simply retry a given mission upon completion then and there, instead having you flung back to the main hub of the Martian city, to walk all the way back to a desired mission and the game’s blatant lack of foresight pertaining to a player’s time becomes even more apparent. 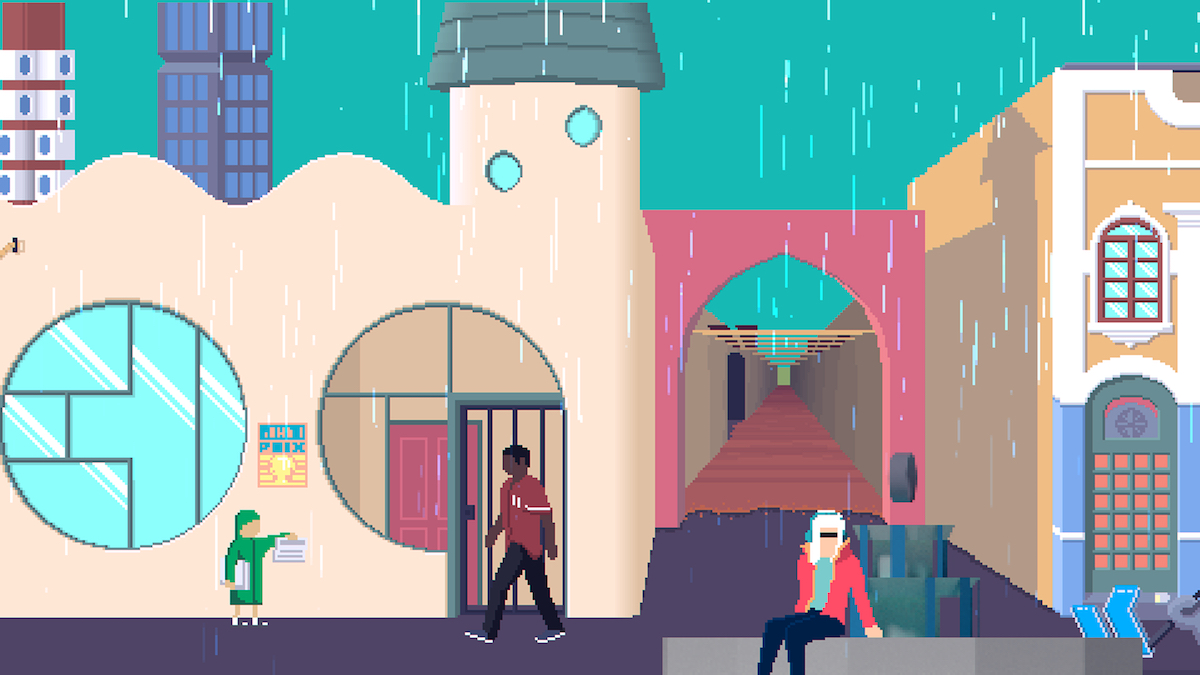 As is, like so many survival entries, the presence of statistics like hunger and bike damage to keep a tab on — resulting in a large portion of your winnings/earnings spent bringing both stats back down to 0% over and over again, an obviously artificial lengthening of one’s time in the game. You could argue that while the former stat is relatively controlled at the game’s own discretion, the latter is down to one’s skill (or lack thereof) during missions. And there is a degree of truth to this detail — the fact that one’s ability to dodge obstacles and make use of your trustee bike’s thrusters is paramount if you want to keep the damage percentage as low as possible. Plus the ability to customize your bike with bought/stolen parts and energy cells, though brief, does at least offer some room for experimentation and versatility in your chosen set-up — making careful use of one’s grid space and prioritizing how large a buff said parts get in the process.

But as noted, whether it’s the AI itself that tends to run on a completely different rule-set to yourself or the frequent technical hiccups (playing on the Switch) when one too many explosions or visual effects clutter the screen, these small RPG-lite systems do little to circumvent the mediocre flair of most racing segments. Gameplay often resulting in something both hectic and chaotic, but not in a good way — players regularly running out of bullets to be left to the mercy of the game’s willingness to have the on-screen truck, that serves as your ammo replenisher, appear but in so inconsistent a pattern. Even the weapon of choice you pick from out of an arsenal in the beginning serves little replayability when the only difference is in their visuals and — aside from a brief borrowing of a chargeable laser gun which serves as a side mission in the game’s hub — remain relatively confined by the restrictive ammunition. 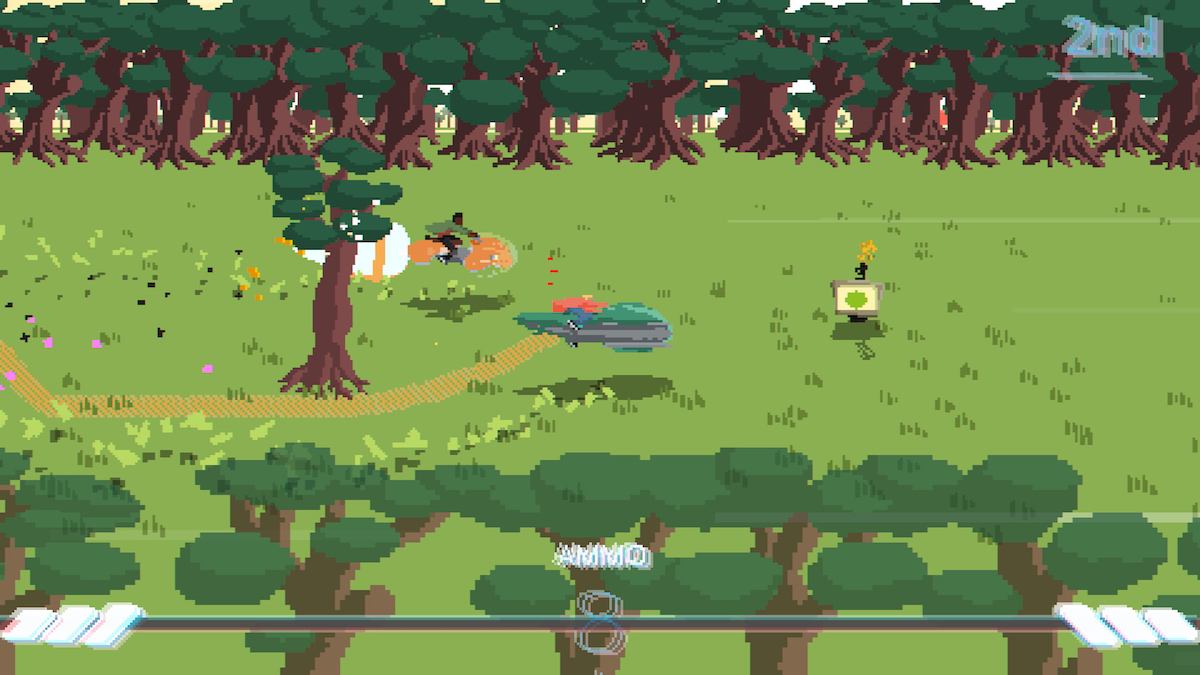 Though its pixellated visuals and bright environments do provide brief pleasantries in the first hour or so, the little variety in its missions and very reason to stay invested other than grinding until the climax results in a game caught between two minds, committing, sadly, to neither one in the process. Satisfying neither the shm’up crowd in it for some arcade-style scrolling, nor the adventure crowd intrigued by its bright, 80’s sci-fi environments complete with singular button-prompt interactions. Desert Child eagerly attempts to pay homage to these influences and while isn’t so indulgent it wanes on the delivery of the gameplay itself, sadly what offer of gameplay there is ends up both repetitive and eventually drab to the point of boredom. Helped little by the disappointing lack of explanation or context for many of its objectives. And even at such a brief run-time of around four to five hours, Desert Child still ends up taking far too long at delivering what is, in actuality, so very little.