It’s rare when the launch of a new IP seems like an event. Sure, there’s always a special feeling around the latest Call of Duty or World of Warcraft expansion, but those are firmly established franchises. Even though Destiny was revealed just a year ago, its launch seems like a can’t miss experience, the hype of which has crossed over from the gaming world into mainstream society. Perhaps the biggest question on most people’s minds, however, is what –is- Destiny? With an unrivaled marketing budget, Activision and Bungie have paraded the title around like it will metamorphosize the industry, but seem to be avoiding the gameplay itself. Now that we’ve finally been able to dig deep inside the final product, it’s time to answer that question once and for all.

The story of Destiny is one of The Traveler, a gigantic planet-like sphere. One day it suddenly arrived in our solar system and with it came a new age for man. With the help of The Traveler, multiple planets were colonized, technology was rapidly advanced and lifespans tripled. While this new Golden Age would last for centuries, it unfortunately came to a halt when a mysterious entity known as The Darkness — an enemy of The Traveler — appeared and waged war against all the Traveler helped build. To protect what was left of humanity on Earth, The Traveler scarified itself. The remnants of humanity built a city under it, which it now floats above and silently protects. To aid in its protection, The Traveler enlisted an army of warriors known as Guardians, who can harness special abilities. To support and recruit Guardians, The Traveler has created artificial intelligent robots known as Ghosts. Players are found by one such Ghost and that’s where the adventure begins. 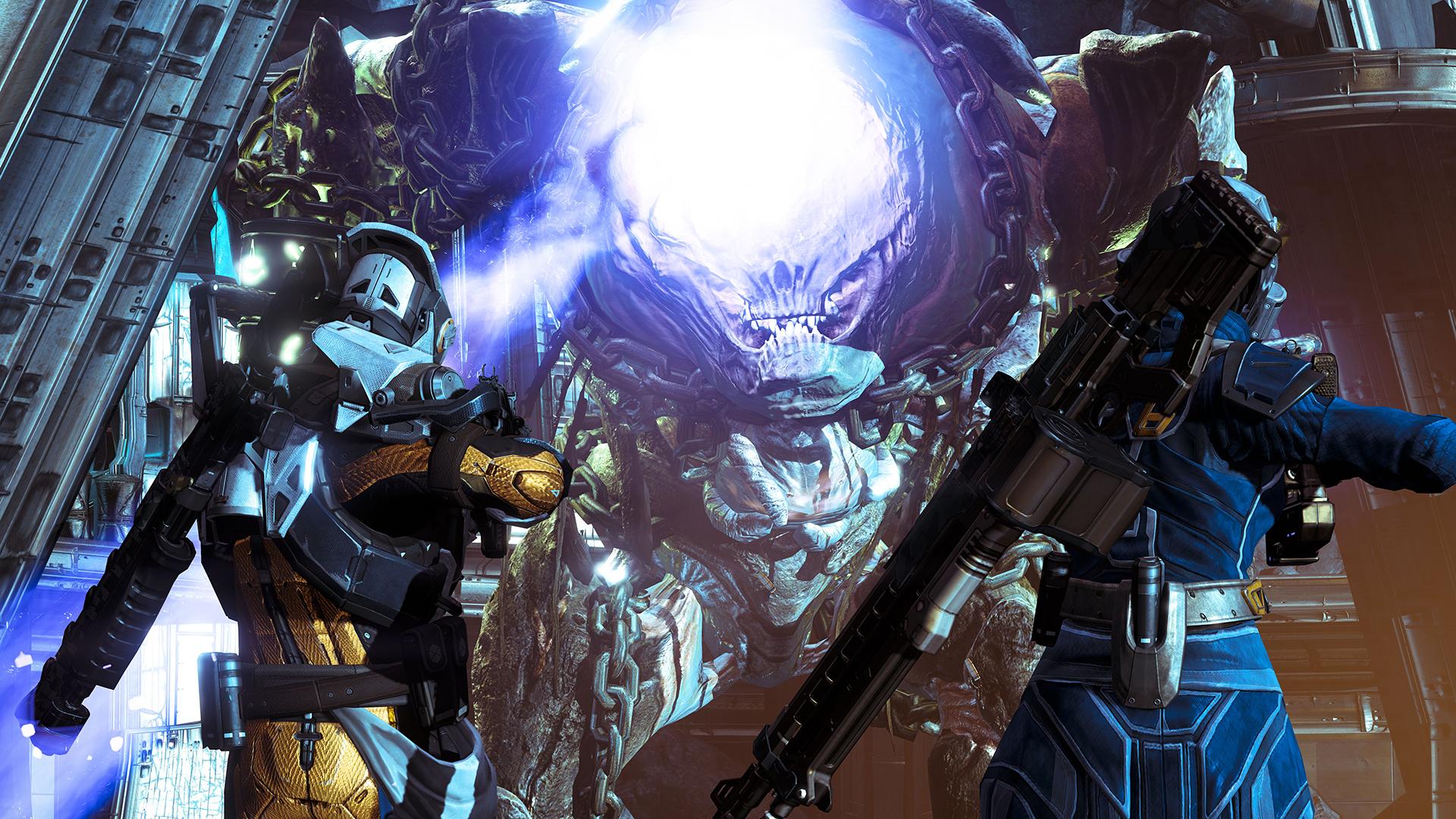 Destiny begins with the creation of a Guardian, which can be customized to the desire of the player. Customization includes gender and race — Human, Awoken (alien-like) or Exo (android-like), as well as various facial features. For a game that takes place almost entirely inside head-to-toe body armor, there’s a generous amount of options to choose from. After customizing the character, one of three classes must be selected: Titan, Hunter or Warlock. Titans are mechanistic soldiers equipped with advanced mech-like suits, Hunters are bounty hunters skilled in reconnaissance, and Warlocks are more magical beings who can wield spells. All three classes have different subclasses, abilities, armor and other attributes, so it’s important to choose carefully. Unlike a game like Fuse, however, it’s not all that important to have a varied Fireteam when actually in combat.

Destiny is separated into five key zones — Earth, The Moon, Mars, Venus and the Tower — with a few ancillary locations such as The Reef, Cassini and Mercury thrown in for good measure. The Tower is the game’s hub, where players can interact with others (mostly in the form of interpretive dance), buy weapons and armors, get mail, upgrade ships and much more. As rewards are frequently given out by Vanguards for completing missions, it’s a good idea to stop here after every major mission. There’s not much to explore here, however, which is both a positive and a negative; positive in the sense that it’s easy to find and access everything, but negative in that it’s more of a glorified menu than anything else. 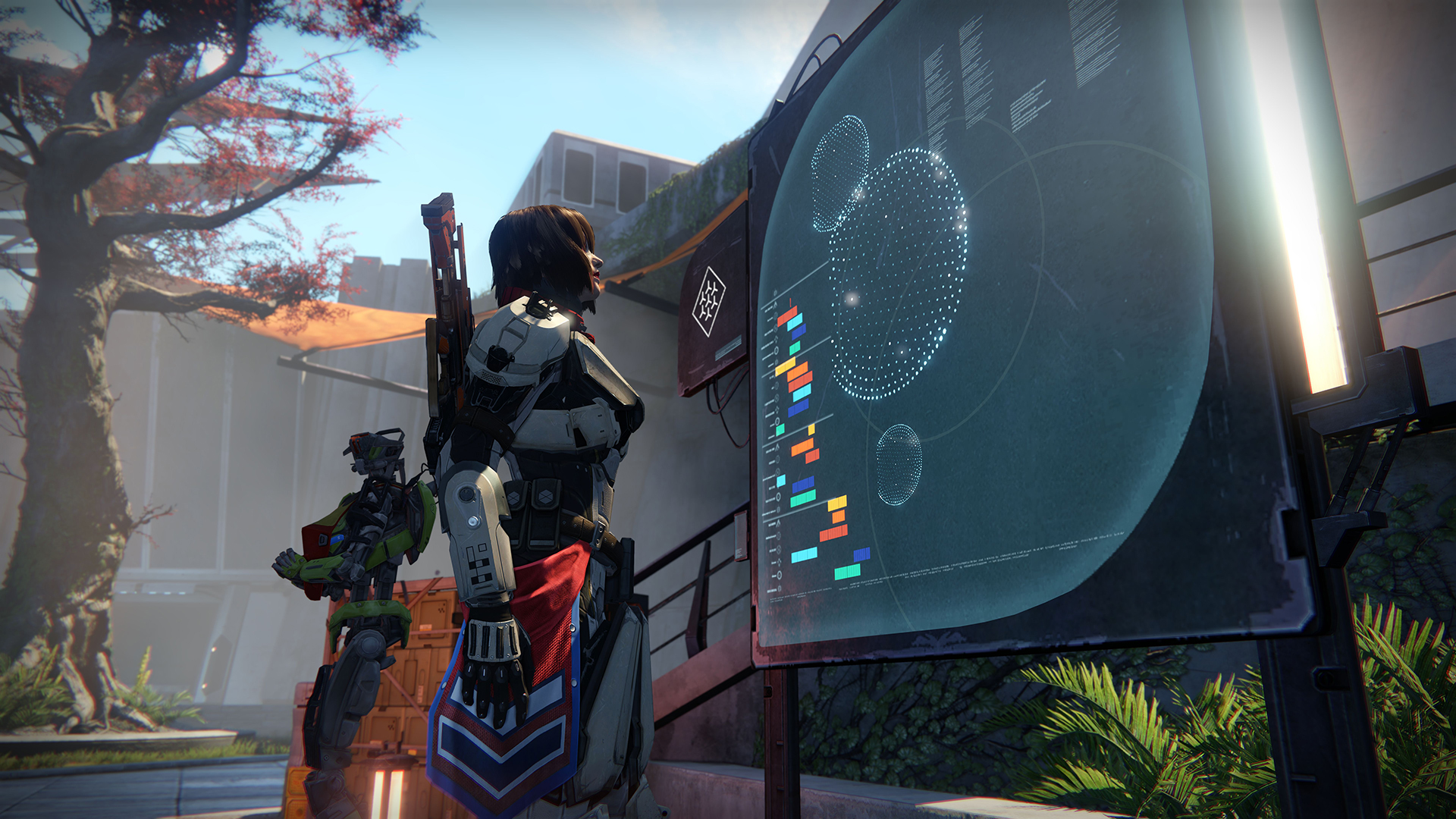 After gearing up in the tower, players then take their ships out to space and head to a planet of their choosing. Unfortunately, this is done through the press of a button that triggers a tediously long loading screen and not in a preferable open world format. Each planet features both story and side quests that are unlocked. The premier side mode is Strike, a cooperative mode that sees Fireteams banding together in a progressively harder level. These feature multiple minibosses and culminate with an enormously powerful main boss that can easily take upwards of ten minutes (and a lot of skill) to take down. After the campaign is long-completed, Strikes — and the similar (but more complicated) Raids — will likely be the modes that veterans return to for the bulk of cooperative play.

Campaign missions start on Earth before heading to the Moon, Venus and ultimately Mars. Missions are unlocked gradually, but can be played in any order once available. Each mission tends to last about thirty minutes (more or less depending on level and amount of players) and sees players infiltrating a part of the area, fighting off wave after wave of enemy. Although missions predominately take place on massive planets, they’re mainly contained to a single, relatively small area. Frequently, missions will take place in the same exact places. For a game revolving around our solar system, it’s disappointing to feel so constricted. 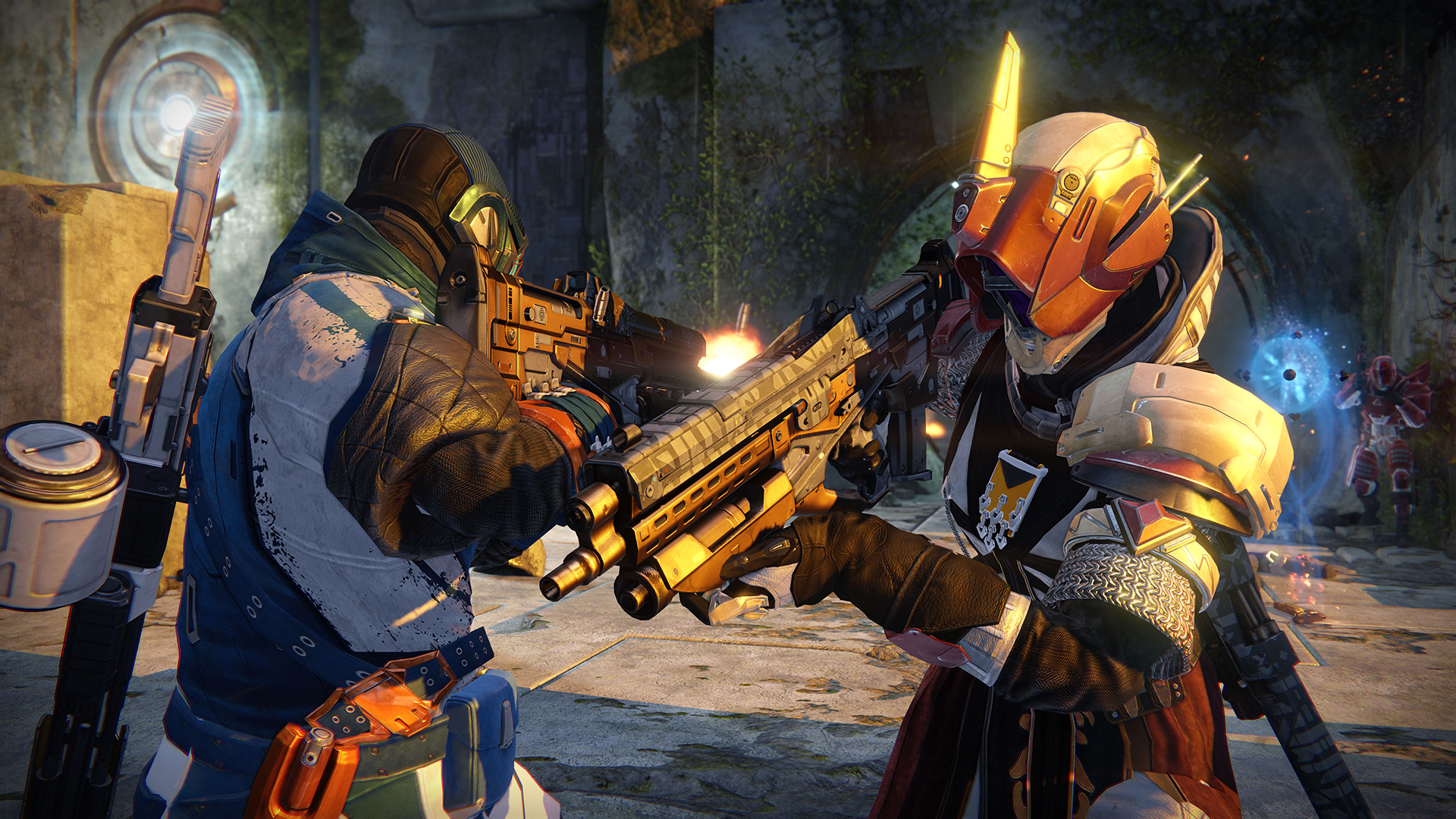 Missions can be tackled either solo or with a group of up to six players. Half the game can be completed with out too much trouble going it solo, but players will want to team up with others for assistance (or at least spend considerable time grinding) once they hit Venus. While the campaign can be completed alone, it’s not going to make for a fun experience. Destiny is clearly a game designed for multiplayer. It’s at its best when six players are on microphones scrambling against a cavalcade of enemies rushing at them. It’s an experience based around teamwork and it must be harnessed to get the most enjoyment out of it.

Although Destiny is at its core a cooperative experience, there’s commendable competitive play in the form of The Crucible. A PvP game mode, the crucible features six game types that are unlocked as players progress, including Control, Clash, Salvage, Combined Arms, Rumble and Skirmish. Control is a Domination-style mode where two fire teams of six face off each other attempting to capture zones to increase points for kills. Clash is an all out Team Deathmatch where two teams of six simply try to out frag each other. Skirmish is basically the same as Clash, except the teams are made up of three. Finally, Combined Arms is a 6×6 Team Deathmatch that allows for vehicles, while Salvage is a Hardpoint-esque mode. Level advantages are disabled so players have more of a leveled playing field (although available advanced weaponry and armor will put new players at a disadvantage). While they don’t exactly reinvent the wheel, all of the multiplayer modes are well-crafted and enjoyable and could easily pull players away from their cooperative adventures for hours at a time. 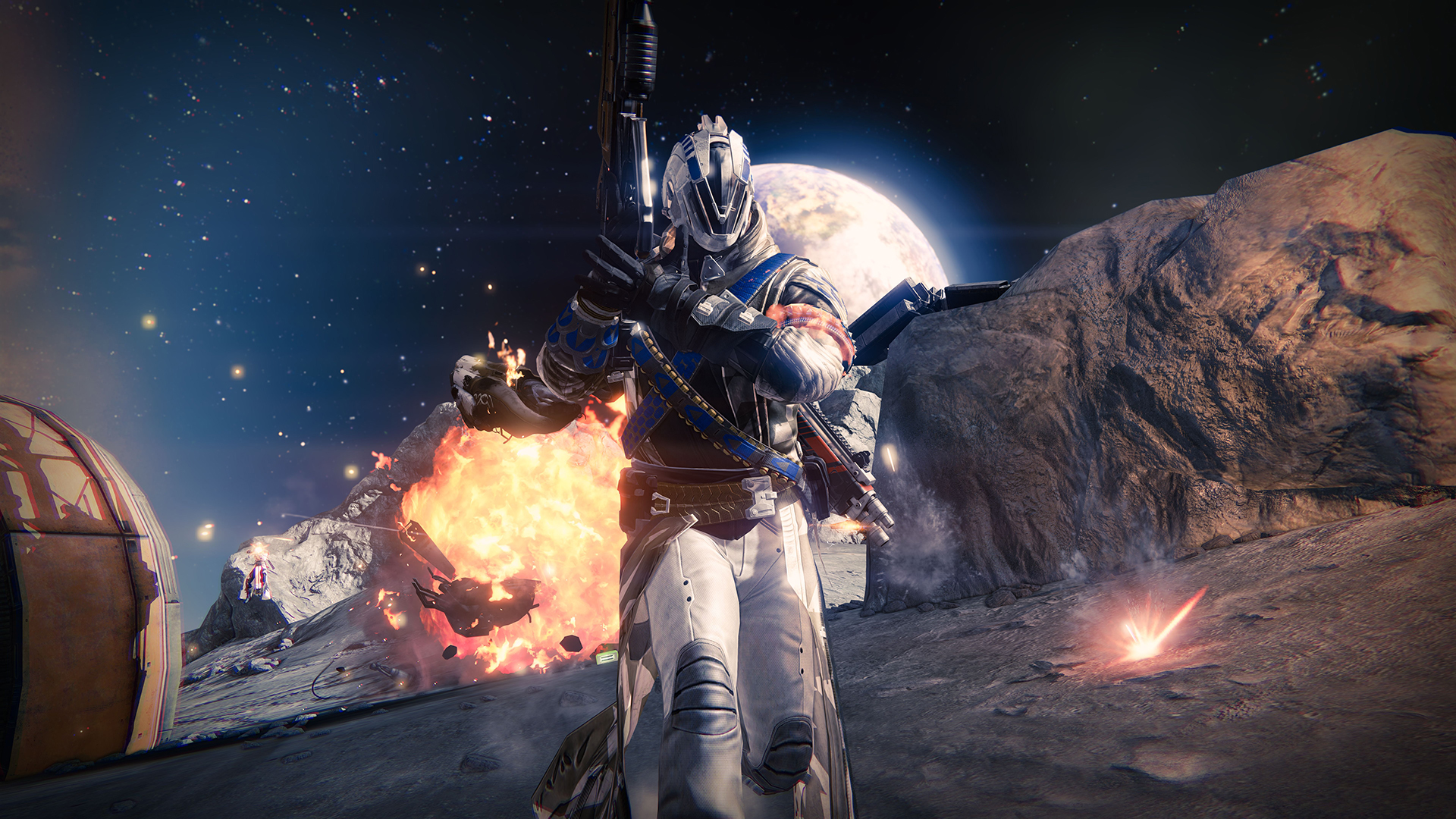 Destiny isn’t the convention-bending masterpiece it’s been touted to be, but it remains a fine shooter. Like a massively budgeted Phantasy Star Online, players can get lost for hours raiding planets, even if the content is finite. The visuals, interface, framerate and online matchmaking, combined with one of the best original soundtracks ever to grace a video game, make for impeccable production values. This is an experience that could have benefited from being open world, however, as well as having more varied combat and map design. Facing wave after wave of aliens could prove addictive for some, but tiring for others. Considering the lack of microtransactions and subscription fees, though, it’s undeniable that Destiny delivers. Its constellation may not yet be written in the stars, but those willing to experience its universe won’t soon be disenchanted.