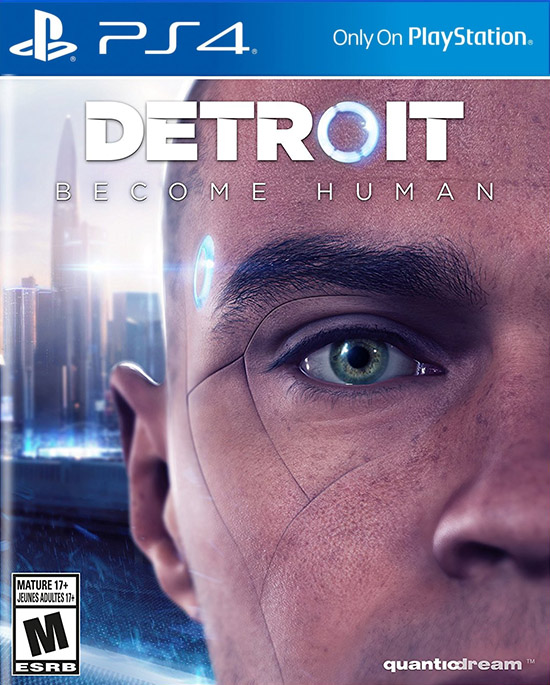 Detroit: Become Human is the culmination of developer Quantic Dream’s style of interactive storytelling. Written and directed by David Cage, Detroit feels like a natural successor to the team’s most praised effort, Heavy Rain: it follows multiple seemingly unrelated narrative threads that cleverly intertwine as the story unfolds, it’s filled with tense quick time events that rely on active player input and features fully-realized characters with intriguing backstories and even more interesting motives – Detroit simply does all of this better. The key difference is that the three characters the player controls in Detroit are androids and their separate journeys manage to fulfill the title’s promise of showing the world what it means to be human.

Though some felt Quantic Dream’s previous title Beyond: Two Souls was a step backwards in quality from Heavy Rain, Detroit does some heavy lifting in proving that this studio is at the height of their abilities. Instead of wading in unfocused storytelling, the three protagonists of Detroit are clearly defined. Kara, an android that was beaten apart by her owner and subsequently reassembled by her creators at CyberLife, is returned to this unsafe environment without her memories. Connor, a unique police model, is tasked with hunting down deviant androids that have somehow broken free from their programed restraints. Markus, an android that cares for an aging and famous artist, is thrusted into the role of savior as he has to decide how to liberate his fellow androids.

Each of these stories feels unique, both thematically and in gameplay mechanics. Kara’s plot centers around love and family with most of the player’s decisions revolving around protecting and maintaining a relationship with the young girl Alice placed in her charge. Connor is the most immediately machine-like, following protocol to a T at first, though he grows more independent through his interactions with his partner Lt. Anderson and through their experiences in investigating android-driven crime scenes. Markus eventually becomes the crux upon which the overall plot revolves, transforming into a Jesus figure to the mistreated androids across the world. Their unique attributes are further amplified by the inclusion of three separate composers working on the soundtracks for each character – Quantic Dream put the work in to make them feel as distinct as possible. 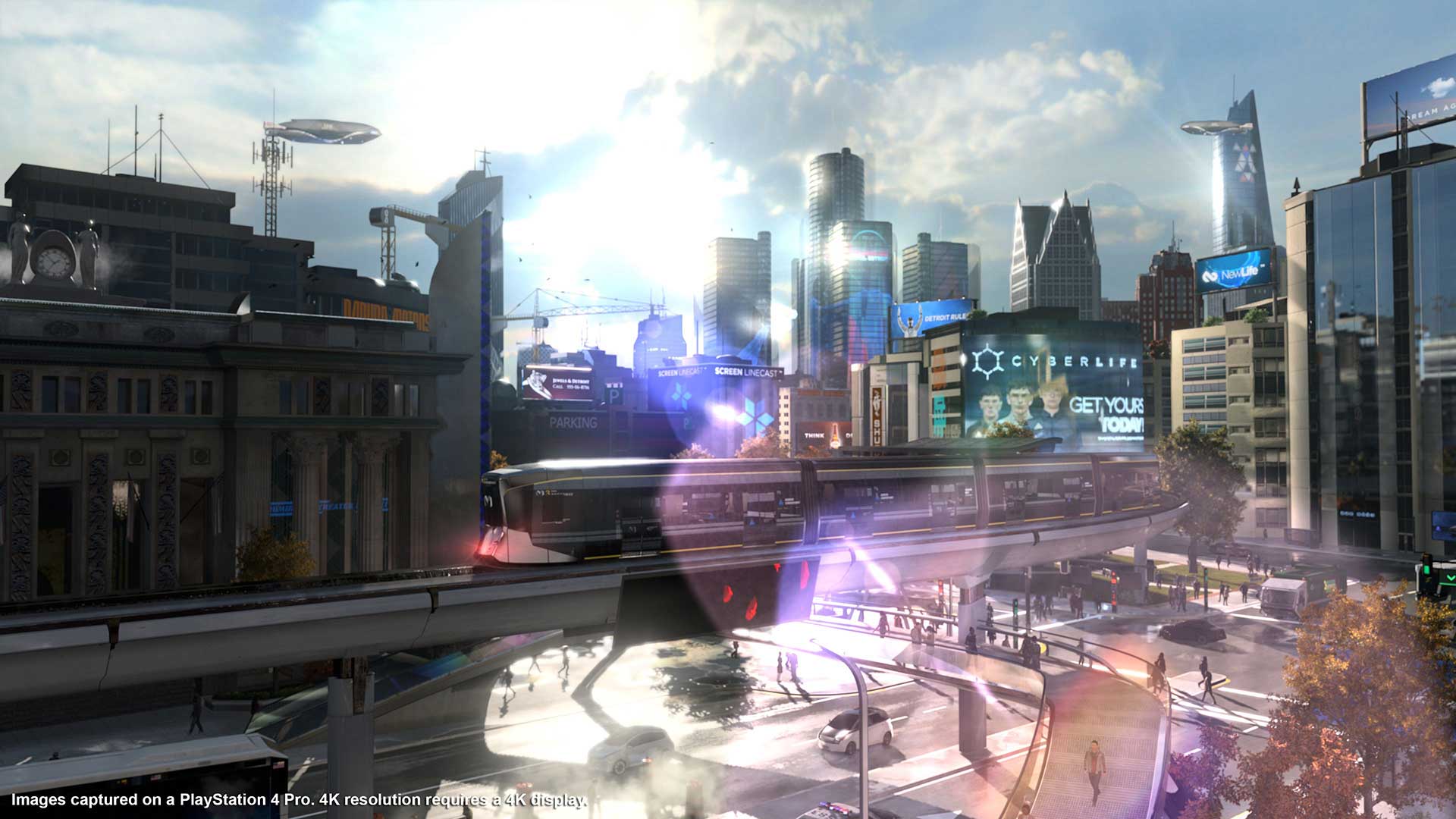 Detroit takes place entirely within its namesake city in the year 2038, which has been revitalized by the advent of android technology that emerged from the area. Being confined to this single city, the paths of these three characters intersect in clever ways. Connor’s investigations directly impact Kara and Markus, and the player often has to decide whether or not his actions hamper or assist the others. Markus’ liberation of androids slowly boils into a world-wide event that either sees the player take the path of violent usurper or peaceful protester. Kara and Alice’s attempts at fleeing the country are constantly sidelined by these activities, with public opinion of the android’s cause shifting depending on the player’s actions with all three characters.

The game’s pacing is brilliantly set by the constant shifting between each character’s story arc. These chapters typically last between 10-20 minutes, rarely overstaying their welcome and always moving the plot forward in one way or another. There’s never enough time spent in a single plot-thread to significantly drag down the momentum, and when quieter moments are explored, like Kara making up a bedtime story for Alice or Markus taking a moment to look over the city his actions are affecting, the effect is one of well-thought variety. 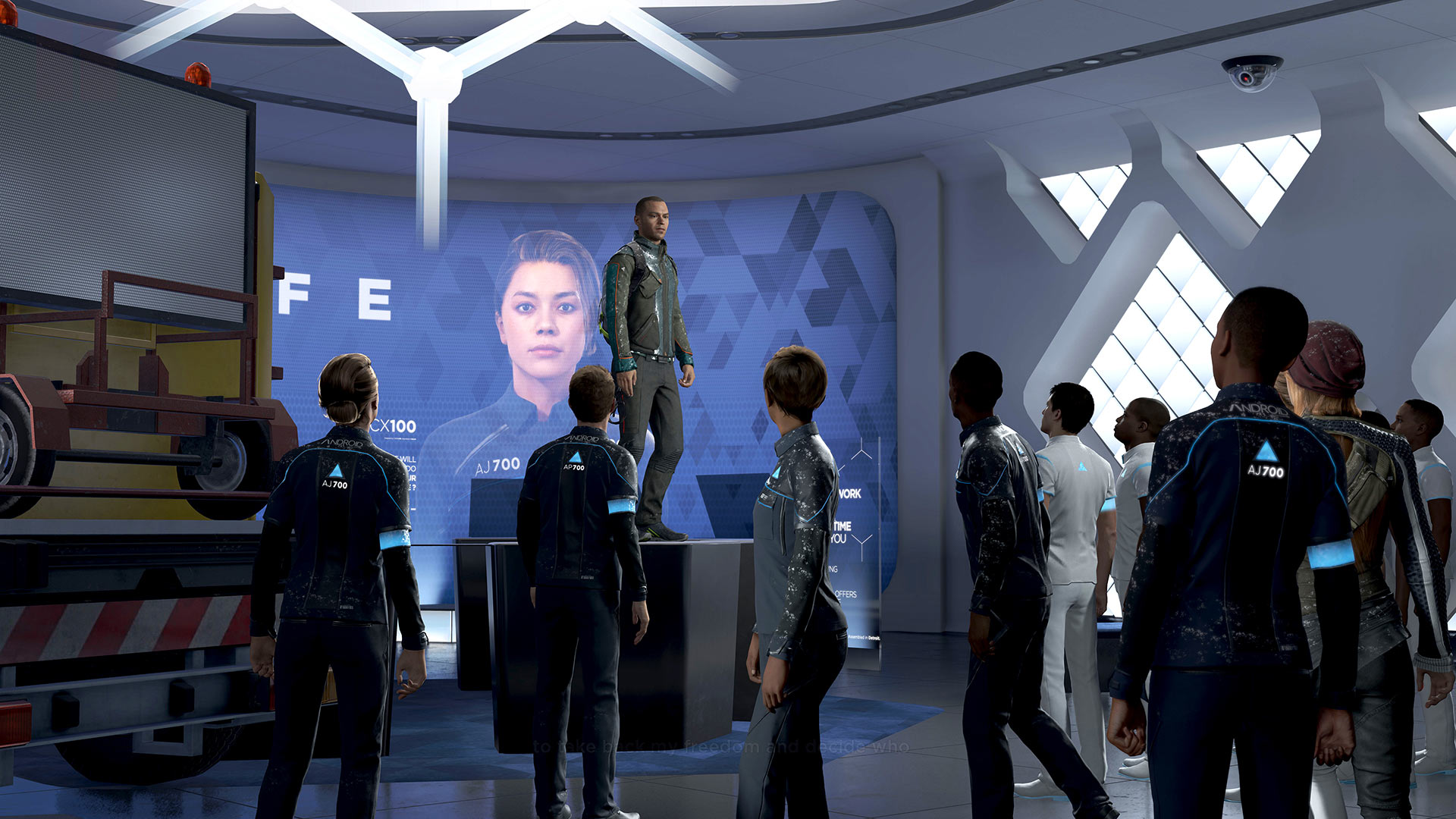 The true accomplishment of the story that’s told, and the way that players have a huge degree of control over how it pans out, is how it slowly imparts a humanist message. In the beginning, it’s easy to compartmentalize each of these characters, thinking of them simply as advanced machines that act in predictable ways, but by the end of the game, the lives of androids truly feel just as (if not more) vital than those of human characters. Once the androids become deviants, they learn how to be human in their own ways, though they are still persecuted and distrusted by the humans that rely on them. The three protagonists are wonderfully well-defined by the player’s actions, though there are a few one-note minor characters that simply exist to move the plot forward. Similarly, their dialogue can feel a bit heavy-handed and forced, as their archetypes become immediately obvious with each of their roles ebbing and flowing in the story – one of the worst offenders of this is the US President, who has the most hilariously fake American accent we’ve heard since Heavy Rain.

In the world of Detroit, unemployment is above 30%, the US economy is stronger than ever, rising shorelines are causing the rich to move inland and the poor to suffer the consequences, China and Russia are in competition to become the Eastern superpower with android technologies and the world is on the brink of World War III. This information is cleverly doled out through news reports playing on TVs in the background and digital magazines scattered throughout the game. These magazines always offer two brief articles that never last more than a few paragraphs, but they succinctly deepen the overall narrative and take the player’s thoughts beyond the confines of the city of Detroit. The headlines eventually begin to reflect the player’s actions, as the stories of the androids directly impact world events. 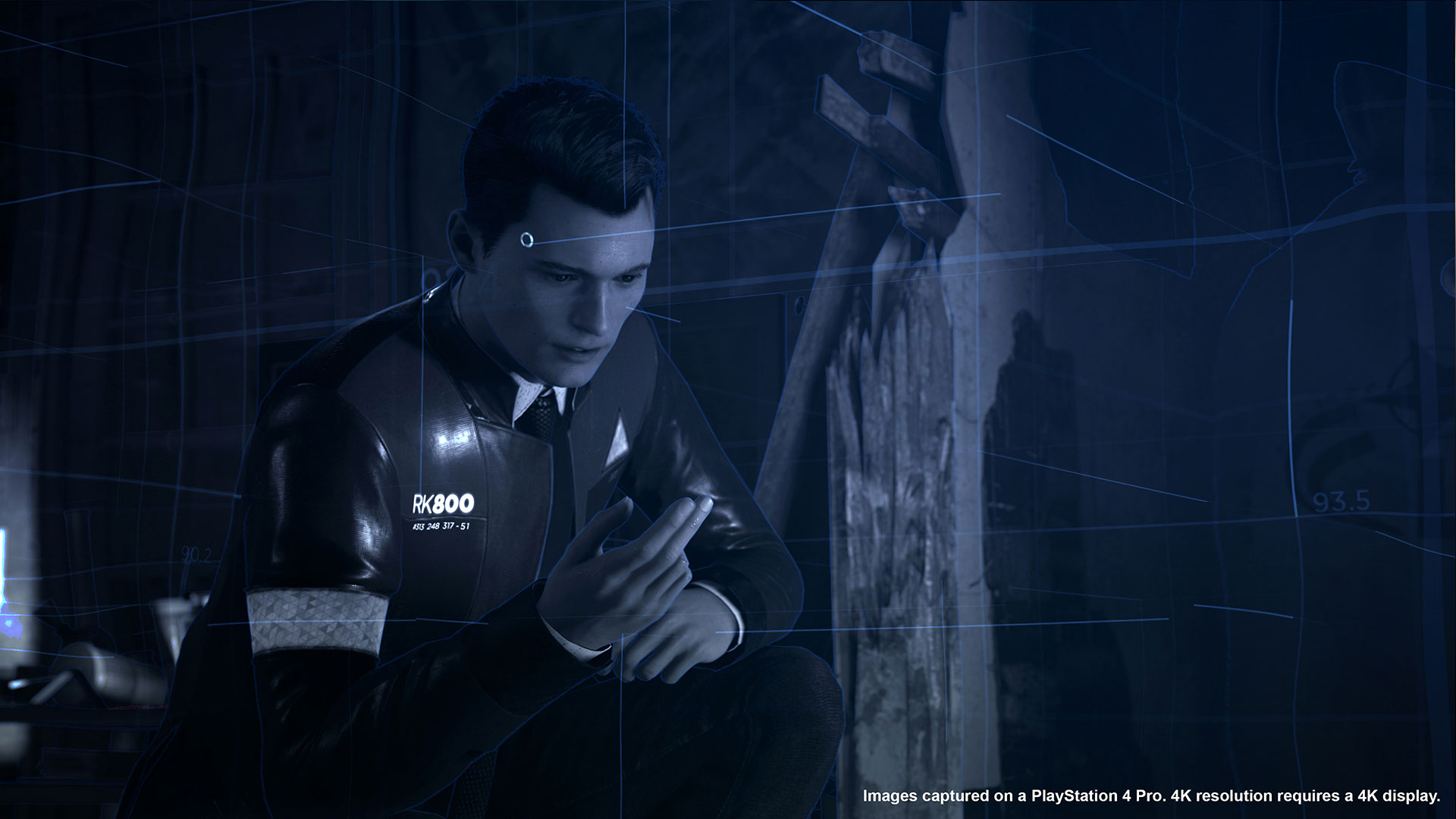 At the end of each chapter, the game takes a moment to show the player the flowchart of the actions they took throughout the chapter alongside all of the points in which they could have made separate decisions, showing that there are completely different ways that things could have turned out. It’s a brilliant move on Quantic Dream’s part, as it actively reveals just how much the story branches and makes the player’s actions seem that much more unique to them. They claim that playing all of the branches available would take up to forty hours, and that may very well be an understatement. Most players will be able to play through Detroit in about ten hours, though many will be compelled to start another play-through immediately in order to see how differently things could have played out. The game allows players to go back to any single moment in this flowchart in order to replay a scenario that they wish to change or see another outcome of, though it’s recommended that you allow what happens to remain as it is in your first play-through: the stakes feel much higher this way.

There’s a constant balancing of relationships in Detroit and the game actively tells you where you stand with those around you. Kara’s relationship with Alice is integral to the young girl cooperating with her, though sometimes she has to make actions that Alice doesn’t like in order to protect her. Markus has multiple followers that each have different ideas of how he should lead the android uprising and each will either approve or disapprove of his actions based on their own personal viewpoints. Though this may seem artificial, it makes the actions you take throughout the game feel that much heavier, as there’s a nearly tangible quantification of your impact, though no character is plainly given a good or evil action to take. It’s all grey area. 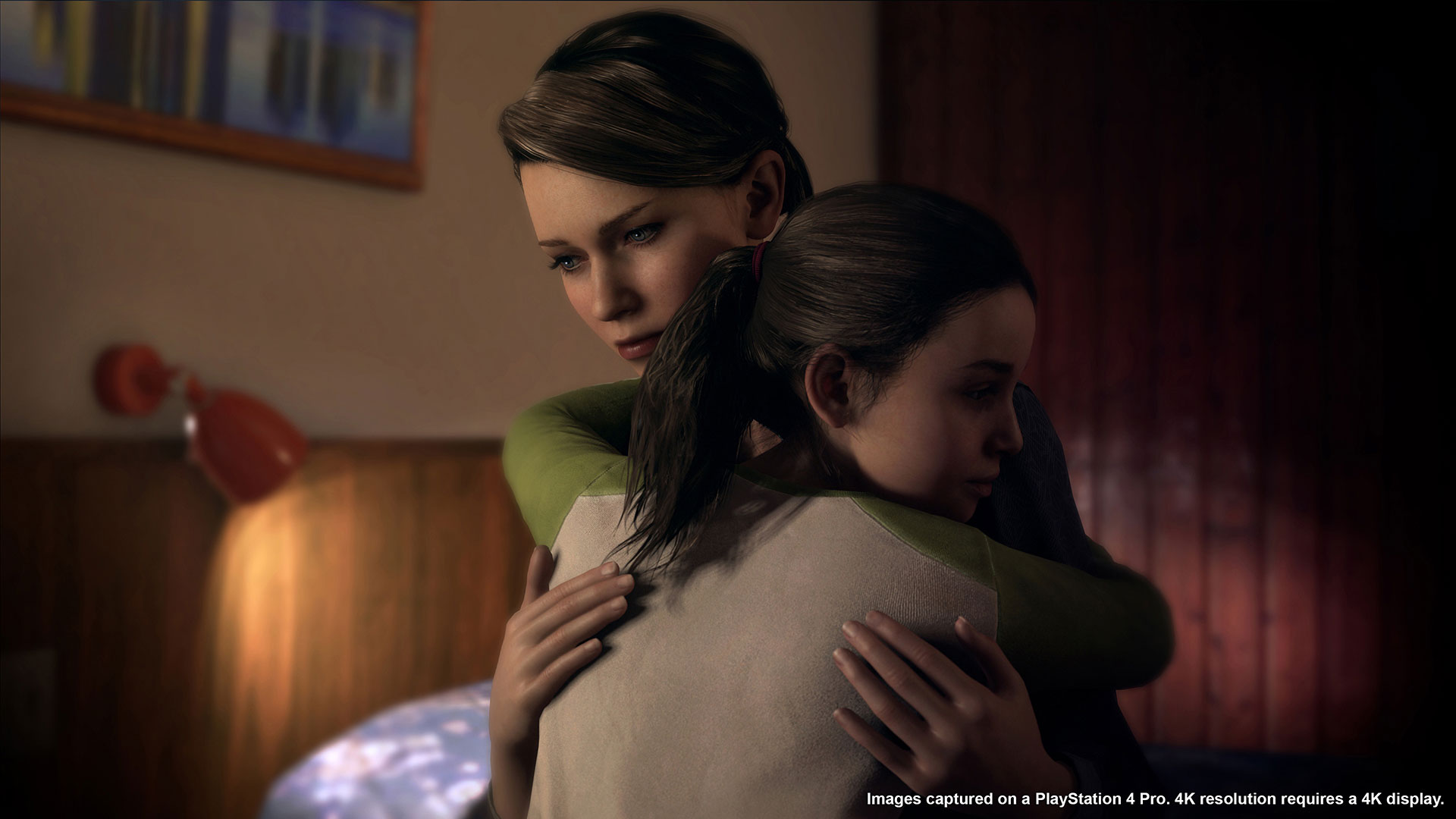 Player input is similar to past Quantic Dream games, where controls attempt to mimic the on-screen action as closely as possible. The right and left triggers often simulate grabbing actions, the right stick is rotated in quarter intervals to turn things over, the DualShock 4’s touchpad is used to flip pages in digital magazines and motion gestures are often used for more intense actions. Ultimately, this way of interaction with the world is more polished than in Heavy Rain or Beyond: Two Souls, but it’s still clunky  far too often. Luckily, during more imperative quick time sections, one or two missed button prompts won’t spell doom for the character, though these mistakes can always be felt, and if enough are made, the player will absolutely regret the results. The motion gestures aren’t always intuitive and button mashing to run during a chasing sequence can drag on, but this method of interaction works overall, and it results in an immersive experience in which the player feels in control of their actions. There are Experienced and Casual difficulty settings that help balance Quantic Dream’s desire to make their stories available to everyone, but also give players the choice to be challenged all the while.

The gameplay itself is more varied than past Quantic Dream outings. The quick time events and contextual button prompts are as prevalent as ever, but there’s much more to do to keep the proceedings interesting. Connor frequently reconstructs crime scenes by finding points of evidence within the scene to piece together the events and he interrogates both humans and androids with some instances requiring him to actively control the subject’s stress levels. Markus “preconstructs” routes that he can take, determining the likelihood of success with each possible action. Kara’s gameplay involves more stealth and revolves around protecting Alice, whether it be by convincing threats to keep away or by directly intervening in events. 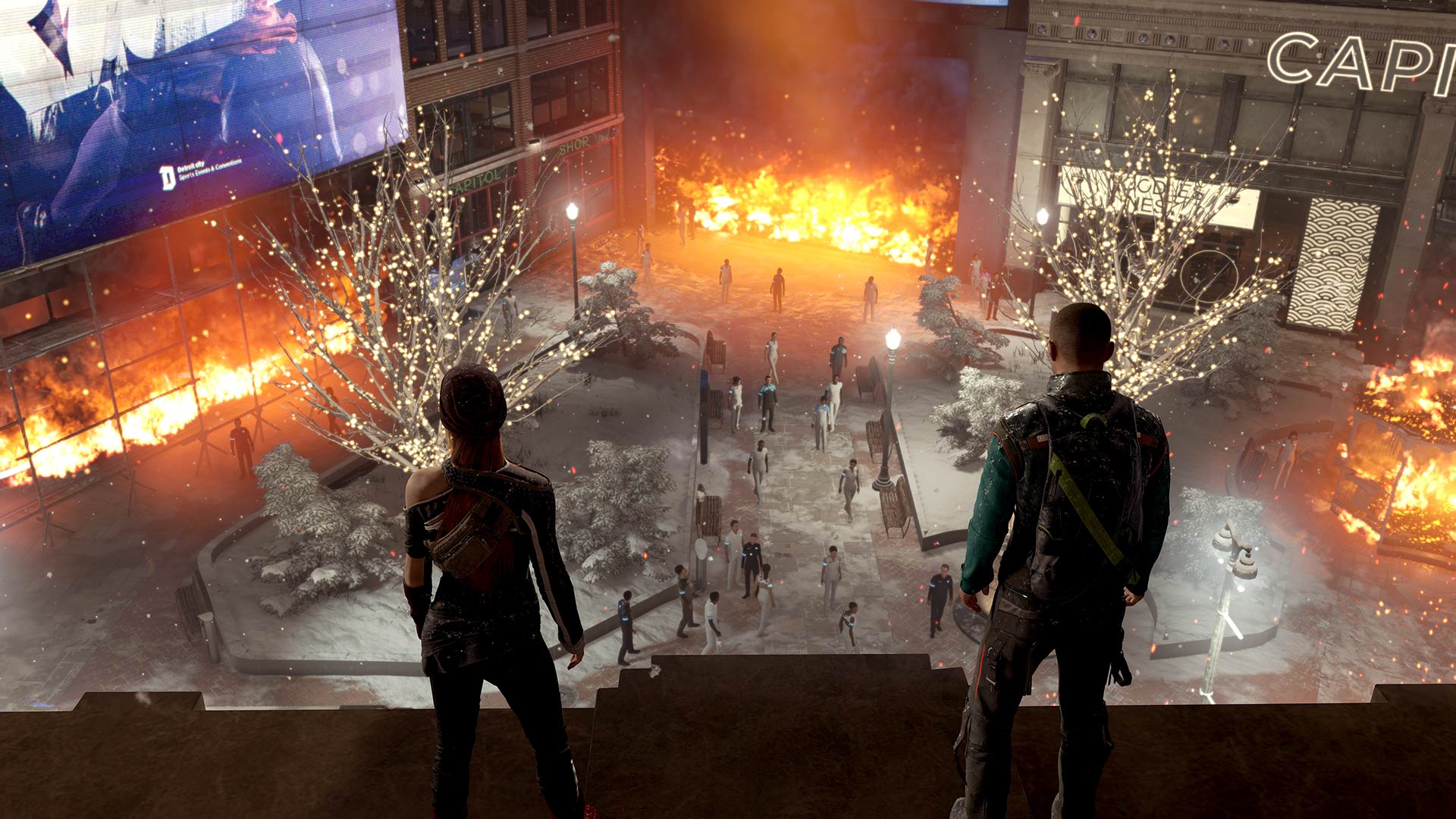 Because Detroit is so focused on storytelling, there are unfortunately a lot of artificial barriers within the world, restricting exploration to relatively small areas at any given time. This is understandable, given how complex the branching narrative already is, but it’s still a shame that they didn’t’ come up with more natural ways to keep the player within restricted zones without simply turning them around once they hit a point in the street they can’t cross.

This focused design has allowed Quantic Dream to wring every last drop out of the PlayStation 4 that they could. Detroit is stunning, perhaps standing as the best-looking game on the console as its shockingly realistic facial movements and intensely detailed environments never feel out of place. The colors are lush, especially when HDR is enabled, and character animations look as natural as possible – even the minor idiosyncrasies of the androids are clearly identifiable in comparison to their nearly identical human counterparts. The game generally runs at a stable 30fps, both on the standard PlayStation 4 and the PlayStation 4 Pro, though there were a couple of moments in which this consistency faltered. No glitching or even texture pop-ins appeared in our play-throughs, and it’s clear this game was given an extreme level of polish that puts it above the competition.

Detroit is the best possible version of itself. Character interactions and decisions feel natural despite the story being filled with artificially intelligent creatures. And perhaps that’s the point: their artificial life becomes just as valuable as natural life. By the end of the game, the lines of what it means to be human are blurred and the player is left with a complete understanding of both sides of the conflict. Humans don’t want to be overtaken by their own creations, but they are still capable of love and understanding towards androids. Androids simply want freedom, but they’re a new race that is still coming to grips with the world. The narrative is filled with pressing real-world issues including xenophobia, automation of the workforce, climate change, social media influence and more. Though it comes off as heavy-handed at times, Detroit tells an endearing story that verges on the profound, diving deep into the nature of humanity itself. It proves that interactivity and focused storytelling aren’t mutually exclusive and that the two can enhance each other given a proper degree of talent behind the scenes.