It’s been a hot second since the likes of Double Dragon made the rounds. The game and its predecessors, Kung-Fu Master and Renegade took arcades by storm in the mid and late 80s, exposing that generation’s teenagers to gratuitous violence. In these, a solid grip of mechanics, a penchant for avoiding damage and persistence in the form of a constant stream of quarters were the ingredients for a winning recipe. Devil’s Dare aims to recapture the genre’s pulpy stories and violence alongside the tension and frustration surrounding the inevitable game over.

In Devil’s Dare, you play as one of four convention-goers, magically transformed into their pop culture icon. Available are the girl in the mech, the sai-wielding youth who ducks and rolls like a Ninja Turtle, hookshot, a Master Sword and Triforce-emblazoned shield-wielding modern-day Link and a heavyset overall-wearing two-handed Axe-swinging man. Each has a unique skillset, including castable special abilities and varied playstyles. The sword-swinging Axel is a balanced offensive and defensive player, berserker Kingston is heavy on crowd-control; Jackson flits around the battlefield quickly while Queenie and her powersuit are versatile. Two more characters are unlockable as you make progress. 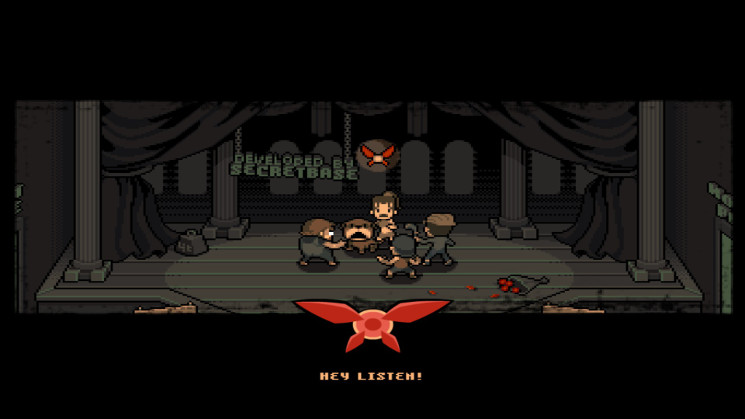 One thing to be aware of, though: making progress in Devil’s Dare is hard. You’re tasked with clearing the world of a virus which turns normal people into mindless, dangerous zombies, which is an acceptably campy and cliché story for a game where the focus is on arcade-style combat. You’re able to choose which order you want to tackle each of the game’s four stages in, with each successive one being more difficult.

If you were to choose the sewer stage to start, for example, you’d go through one level, fight the boss, and be done. The second level you select would have one pre-boss stage with a miniboss, a second “night,” and then the boss. The third level would have two pre-boss stages with minibosses, et cetera. The order you complete the game in is dependent on your path choice, and your path choice will likely be based on which boss you find the most manageable. Wisely pathing will ensure you get a maximum amount of money with which to buy continues and Soul Tokens in later rounds, and adds a layer of depth outside of just the combat.

Combat is highly skill-dependent, and you’ll often find yourself incapacitated and overwhelmed when learning the ropes. Learning to balance character placement, crowd-control abilities and your special attacks to get maximum damage output while taking as little as possible is absolutely essential as you do not want to die. Enemies come in a variety of maddening flavors, and the bosses can and will destroy any semblance of hope you had on your first handful of runs.

Devil’s Dare is brutally unforgiving: if you can’t afford a continue when you die or haven’t purchased a rare Soul Token at the end of a level, your save is deleted and it’s back to square one. This pay-to-win mentality is a direct and painful hearkening back to you running out of quarters at the worst possible time. You can play locally with up to four players which might make the experience a bit more manageable, but the game unfortunately lacks online multiplayer. It’s not an impossible adventure, but far from a casually approachable one, and possesses a roguelike quality of allowing victory over a specific stage or boss fight to be rewarding in and of itself. 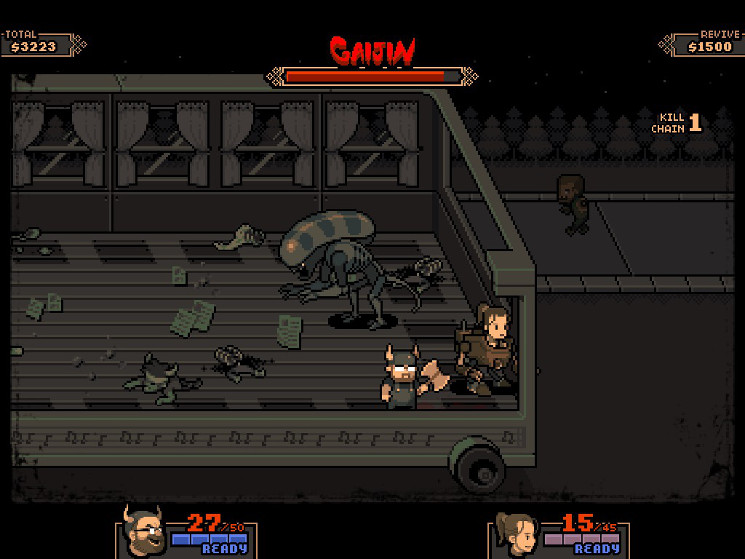 The levels offer neat, diverse environments though the palette is exclusively muted shades of blue, gray, green and brown. A little disappointing as they tend to blend into one another as a result, but it does fit the apocalyptic feel. Fittingly retro video game music accompanies the onslaught, providing a pleasant backdrop for the cavalcade of blood and dismemberment. Devil’s Dare is a spiritual successor to the developer’s past game, BiteJacker, and borrows many of the same enemy models from it as well as this color palette, so it should feel like home to those familiar with the work.

Singaporean developer Secret Base has seriously committed to the late ’80s/early ’90s arcade feel in Devil’s Dare. The game’s trailer seems to have been created in the early 90s and lost for over two decades, the intro sequence plays out like the constantly-looping pregame video that gives some semblance of pretense for the goings-on in an arcade machine and the combat takes place in 2D environments bound by invisible walls which you can only venture past after conquering an onslaught of the walking dead and familiar faces — Jason from the Halloween series and the Alien from its eponymous franchie, among others. Devil’s Dare is a great homage to the arcade beat ‘em up genre jam-packed with both retro and pop culture familiarity. 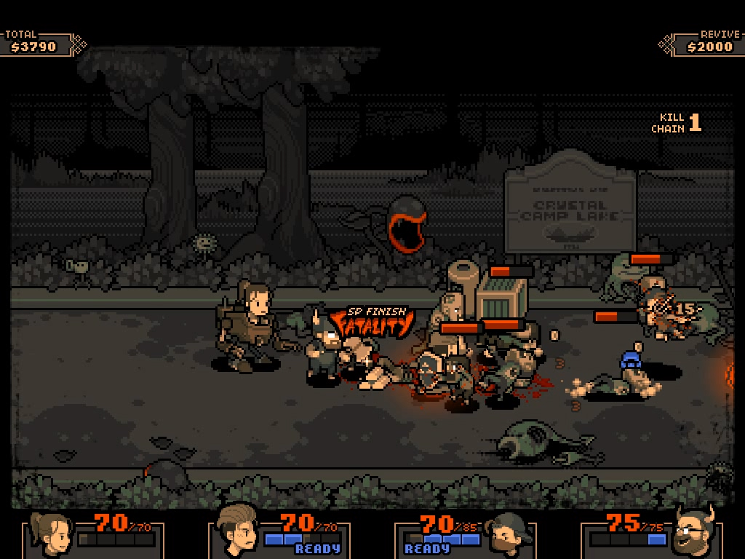 Devil’s Dare is a dedicated return to arcade beat ‘em ups of ages past full of familiar-feeling characters, opponents and music. It provides difficult and skill-based combat and a constant stream of challenging encounters that will prevent you from losing interest. The lack of online multiplayer in favor of local co-op only, while authentic to the arcade experience, is a saddening exclusion. Still, it’s a rewarding, nostalgic and tough experience which keeps the challenge dialed firmly to 11.