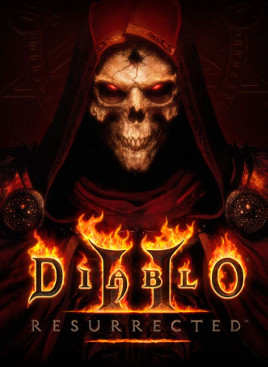 Released in 2000, Diablo II was a highly-addictive action RPG with a heavy emphasis on loot. The gameplay premise couldn’t be any simpler: choose a character and start hunting the Lord of Terror by going on a journey destroying countless legions of undead, demons, giant bugs and other nasty creatures. What contributed to the addictive factor was experimenting with different character builds to try to create a unique warrior and trying to collect the randomly-generated weapons and armor. A year later the Lord of Destruction expansion pack was released, adding a new act, two new character classes and additional features. Diablo II: Resurrected strives to be the definitive version of Diablo II, complete with the expansion pack and quality-of-life improvements.

Diablo II: Resurrected takes place shortly after the events of the original Diablo, featuring new heroes hunting down Diablo to prevent his disastrous return to the world. There are seven classes to choose from: Amazon, Assassin, Barbarian, Druid, Necromancer, Paladin and Sorceress. Each class plays differently from each other and part of the fun of Diablo II was playing around with different character builds. Assassins could be built to be either a master of deadly martial arts or an expert at laying booby traps. The Sorceress can become a master of fire, lightning or ice magic. The Druid could be a shepherd of wolves, a master of nature magic or a tank-like werebear. These are just a few of the possibilities on how a player may choose to develop their character.

The story of Diablo II: Resurrected unfolds across five acts that take place in varied locations, ranging from deserts to snow-covered highlands. The themed environments help each act feel distinct from the previous one, introducing new landscapes to explore and their own set of enemies, each one guarded by one of the Prime Evils or Lesser Evils. Diablo II loves the use of giant bugs for whatever reason and these overgrown arthropods heavily populate many areas, but that’s a design choice that has been pondered for decades. Most players will likely complete the game with a ballpark level around 30, but there are additional difficulty levels to unlock, Nightmare and Hell, that offer steeper penalties for death, more powerful enemies but greater loot rewards. 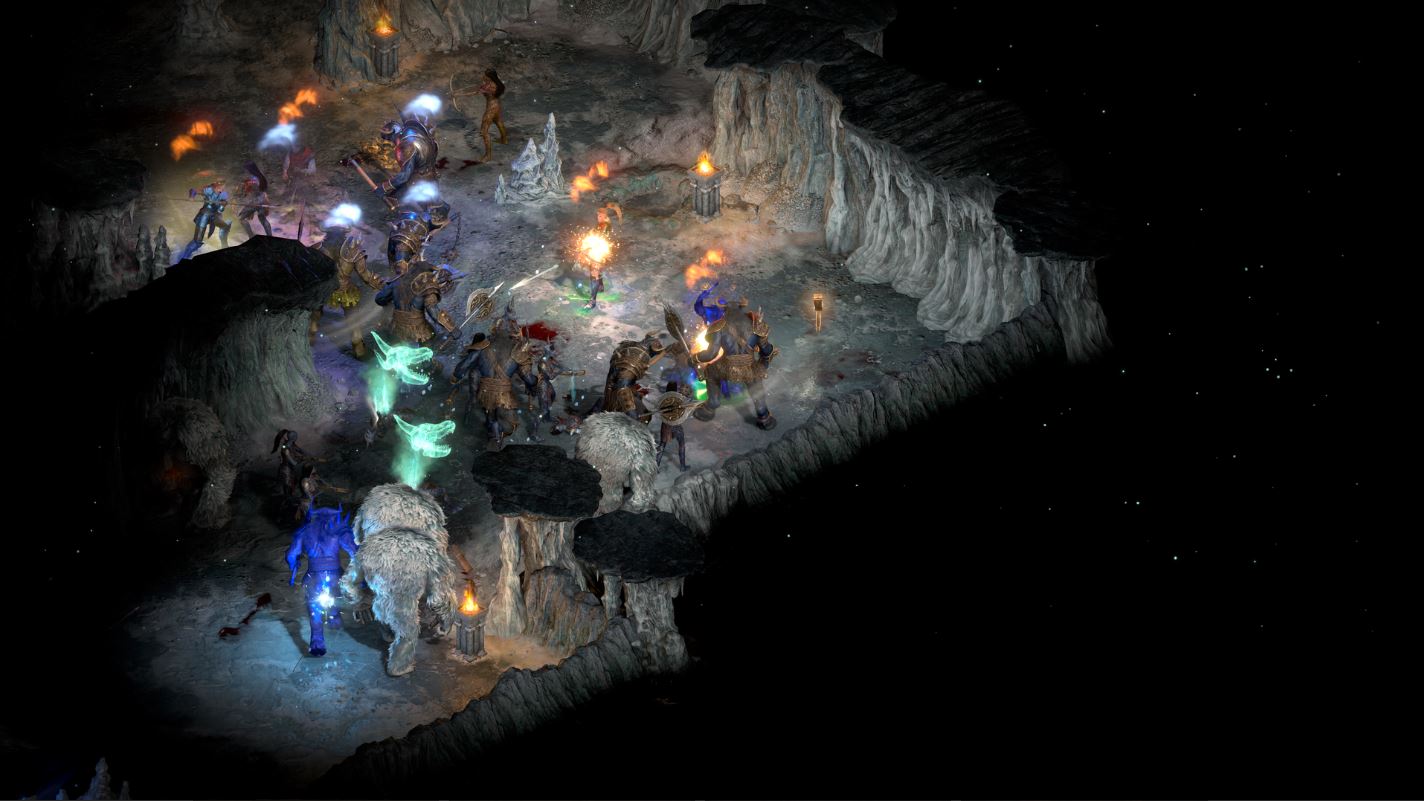 Diablo II: Resurrected plays like a typical Diablo clone. This should surprise no one as this is one of the games responsible for that term, but since reviews are supposed to contain useful information, this is an isometric hack n’ slash action RPG. The player guides their character through procedurally-generated maps of each region, fighting off hordes of monsters while trying to amass better loot. The gameplay is entirely repetitive with endlessly clicking on attack, cast spells and use skills, but while this is normally a criticism in games for whatever reason the repetitive nature works well with Diablo II.

Part of why the repetition works is based on the reward cycle and hunt for better items. After developing a character’s skill set, the next most important part of character building is equipment. Diablo II has a wide array of various items to hunt. In addition to powerful weapons and armor that have coveted stat or ability boosts, there are more unique things to look for. Completing sets (green items) offer additional bonuses when the set is closer to completion and hunting for these items and trading set items with friends is something many OG Diablo II fans have memories of doing. There are also socketed items that can be equipped with gems and jewels for various bonuses. 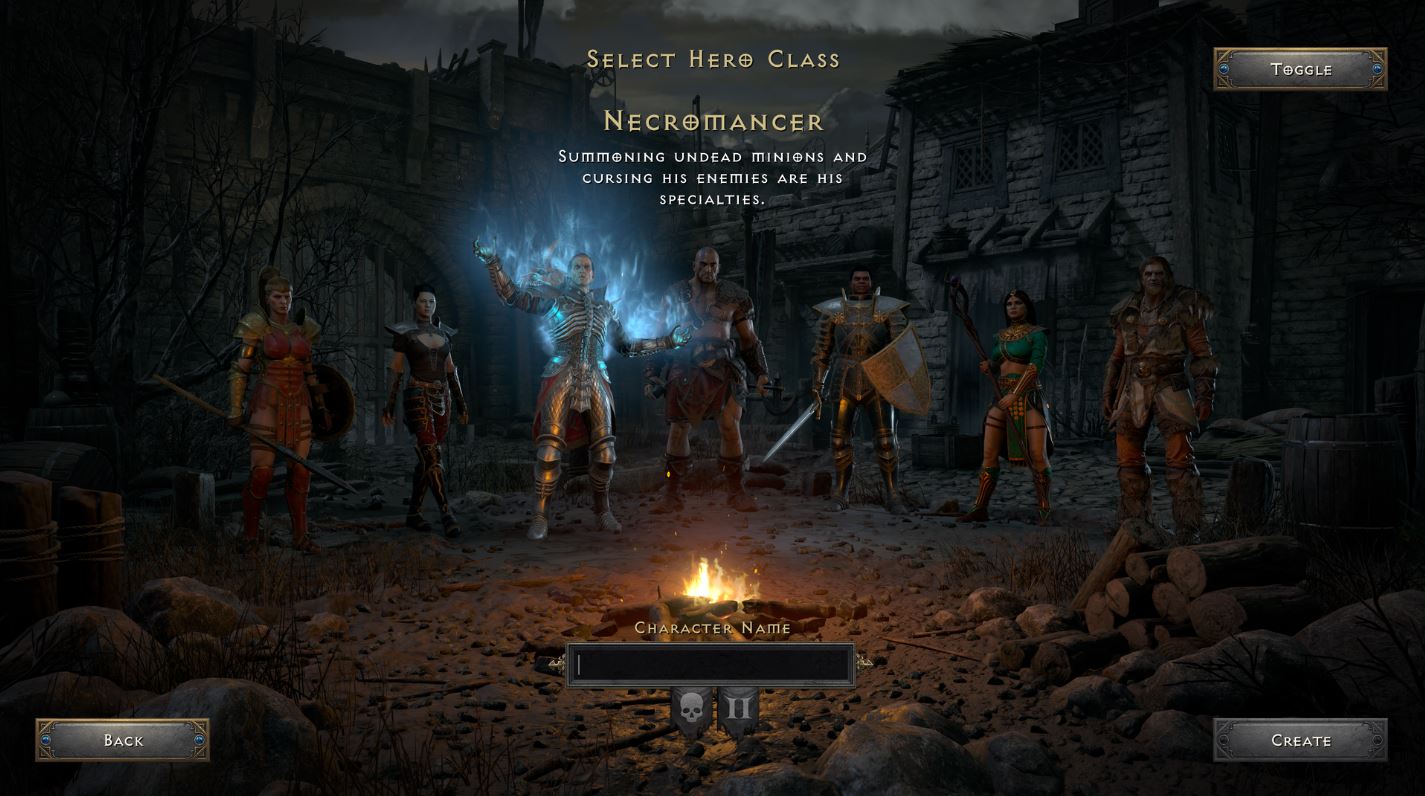 Diablo II: Resurrected does offer quality-of-life improvements along with updated visuals. The graphics have been redone in HD 4K splendor, with the once 2D characters rendered as 3D models. It might not look drastically different if you’re going by nostalgia clouded memory, but just hit the G key on PC and the graphics will revert back to exactly how Diablo II looked in 2000. All 27 minutes of the cinematics have been redone to take advantage of 4K monitors. The sound has also been remixed to support 7.1 surround sound. With Diablo II: Resurrected being ported to console, controller support is now included. Old school fans on PC will likely want to stick to the mouse and keyboard set up, which for Diablo II feels more precise, but the controller can be mapped in the same fashion as keyboard hotkeys and works well. In addition to an individual character’s private stash there are three more screens that can shared across an account’s characters, which makes trading items with oneself a lot easier. Lastly, the most important quality-of-life improvement is the ability to reset a character’s skill points. One of the great things about Diablo II was creating a unique character build, but sometimes it just doesn’t work out as well as one hoped or they just want to try something different. Instead of starting from scratch, the player can reset skill points to switch from say a curse and poison specialist Necromancer to one that relies primarily on his golem.

Whether using a controller or mouse and keyboard, Diablo II: Resurrected plays exactly as it did twenty years ago. This is perfect for people who want the nostalgia fix but with QoL improvements. On single player there haven’t been any technical problems during the review, but some of the bugs that infest the different acts seems to have crawled onto Battle.net as there are plenty of technical woes on the multiplayer front, the most widely reported and irritating is the one where players can’t join games because the system didn’t register that their character logged out. While these bugs and technical issues are annoying, we live in age where we can safely assume that within a month or two most of these problems will be patched away. 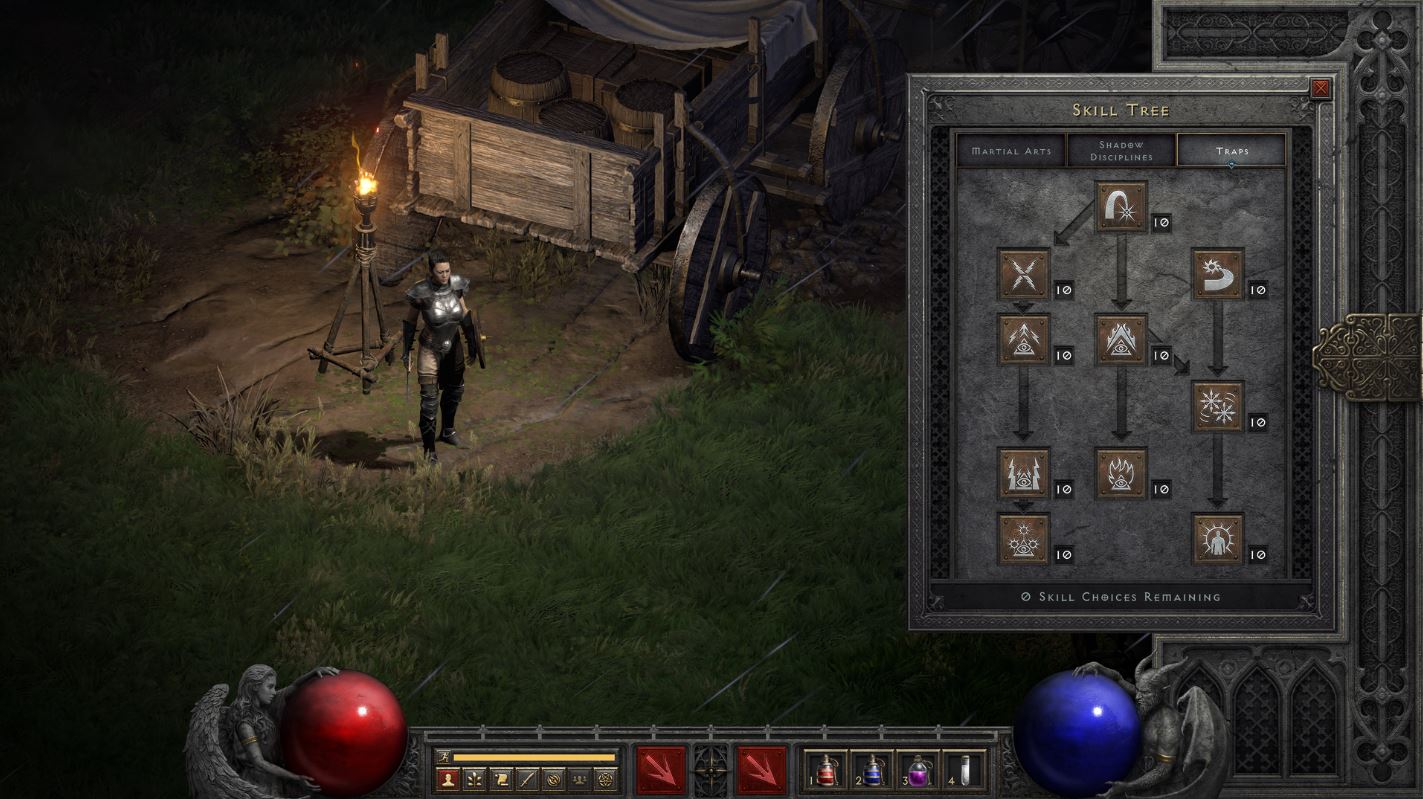 Diablo II is one of those games that was played solo and with friends for years after its release. It’s been some time since I last played it (recent preview Betas and Alphas notwithstanding), but it’s just as fun today as it was when it was first released. The gameplay is repetitive but the hunt for better loot or to level up a character to experiment with skill points encourages continued play. This is made even more enjoyable if you have friends to join you in the hunt for Diablo. The gameplay is dated, and people playing it for the first time may not be as a gung ho as fans of the original version with their nostalgia goggles, but the gameplay is solid enough where even newcomers are likely to enjoy their time in Hell.

This review is about Diablo II: Resurrected as a game and not Activision Blizzard and the reasons they’re currently in the press. Certain gameplay changes were made as a result of that, however, so that topic can’t be completely avoided. Part of the response to the publicly-known complaints was to offer more modest clothing for female characters in some of their games such as World of Warcraft. This response was also applied to Diablo II: Resurrected with many female character, NPC and enemy models. One example would be the Amazon now wears a full skirt instead of a loincloth. A lot of fans are outraged about these changes, and while on principle I oppose censorship, the costume changes didn’t do anything to diminish my enjoyment of the game. But if someone misses the original wardrobe designs they can always press G, and since the original and HD graphic modes can be switched on the fly, those who are curious about all the changes can toggle the new and old designs to their hearts’ content. 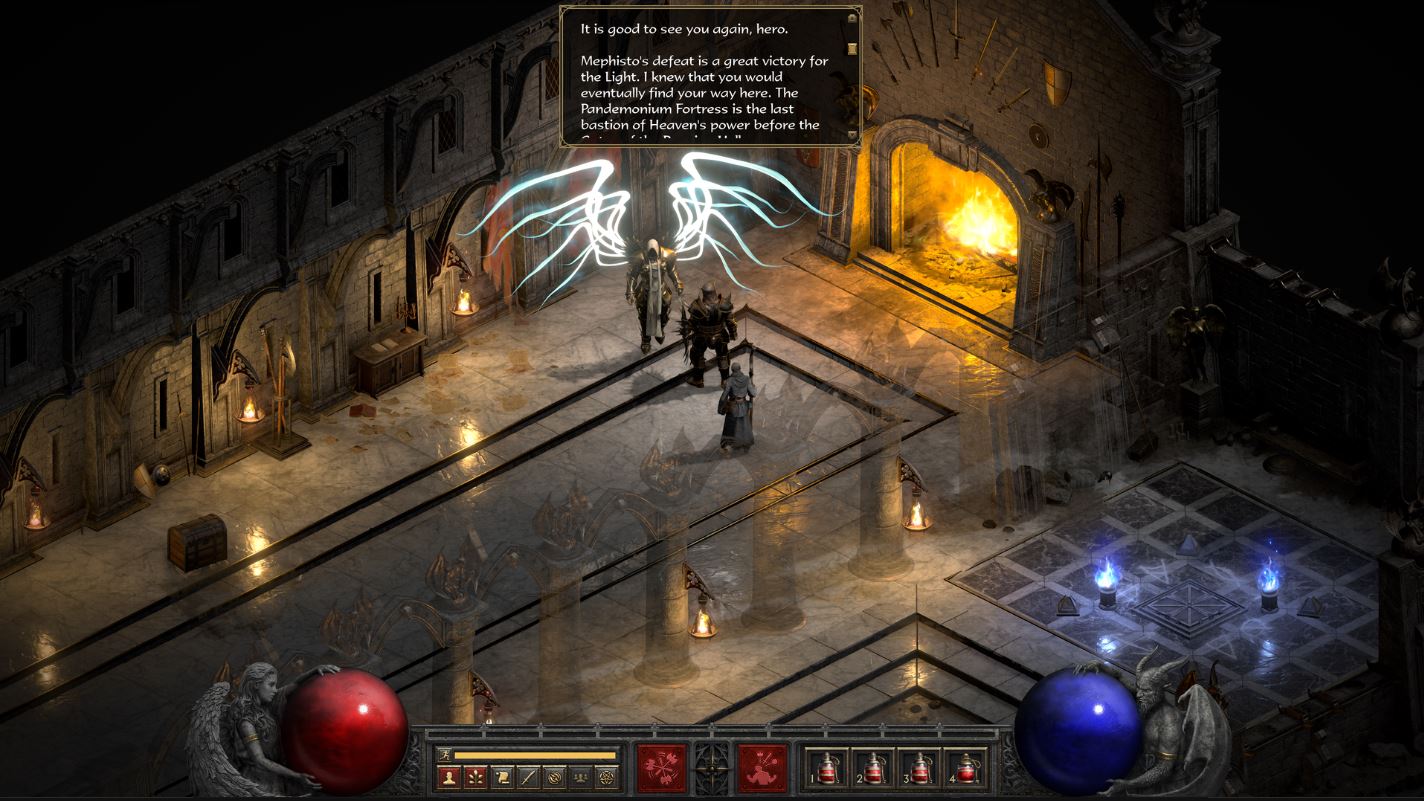 Diablo II: Resurrected keeps the gameplay of the original intact while offering many quality-of-life and cosmetic improvements. Even with all these upgrades it still plays like a twenty-year-old game which may be considered a negative to people who didn’t enjoy the original or have since moved on to more modern gameplay styles. Nevertheless this is one of gaming’s great dungeon crawlers and despite showing its age, the gameplay remains just as fun and addictive as it was when it was first released. The lore of Diablo is as interesting as it ever was even if the storytelling isn’t nearly as fleshed out as one would see in modern games. Giving a facelift to a twenty-year-old game without updating the gameplay is a gamble, but thankfully that is exactly what we got with Diablo II: Resurrected which is how the original fans would want it.