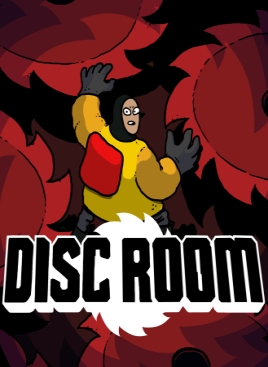 Two years ago, developers Jan Willem Nijman and Kitty Calis helped give us Minit, a unique take on classic room-by-room Zelda-esque adventures, where you only had a limited amount of time to make any progress. It was a successful piece of work for them, winning over several gamers. And just a few months before that, developers Terri Vellman and Doseone gave us High Hell, an arcade-style FPS game that was also extremely fast-paced and full of constant danger. Again, it was a notable success as well. And now, all of them are back with Devolver Digital to team up for what feels like a mix of their various games, Disc Room. It’s a top-down, room-by-room adventure centered around quick and bloody arcade action, but is this a peanut butter and chocolate scenario or something more akin to peanut butter and tuna?

The setup: it’s 2089 and a giant disc has suddenly appeared in outer space, orbiting Jupiter. So now one brave scientist heads inside to explore this giant disc ship, attempting to find out what it is and what secrets lie inside. And what lies inside just happens to include even more discs. Many, many, many deadly discs. Whirring blades of death, all of which behave differently and will try to kill our protagonist as they head from room to room, trying to make sense of just what the heck is going on.

So here’s how the gameplay in Disc Room goes: you run around and try to avoid the deadly discs that spawn in for as long as possible. That’s pretty much it, so needless to say, the gameplay is nice and simple and I don’t have any complaints about it or the controls (although there were a few times I got caught on the wall for a second, in what felt like an annoying glitch). You do learn new upgrades along the way to help you out, though, like the ability to dash through discs or slow down time briefly. Regardless of whatever skills you possess, though, you have to be prepared for the hard truth when it comes to this game: You are going to die. Again. And again. And again. I should clarify: that last statement isn’t meant to build up the difficulty, although it does put up a hefty challenge, but I mean that you will literally be required to die, over and over, in order to find everything. 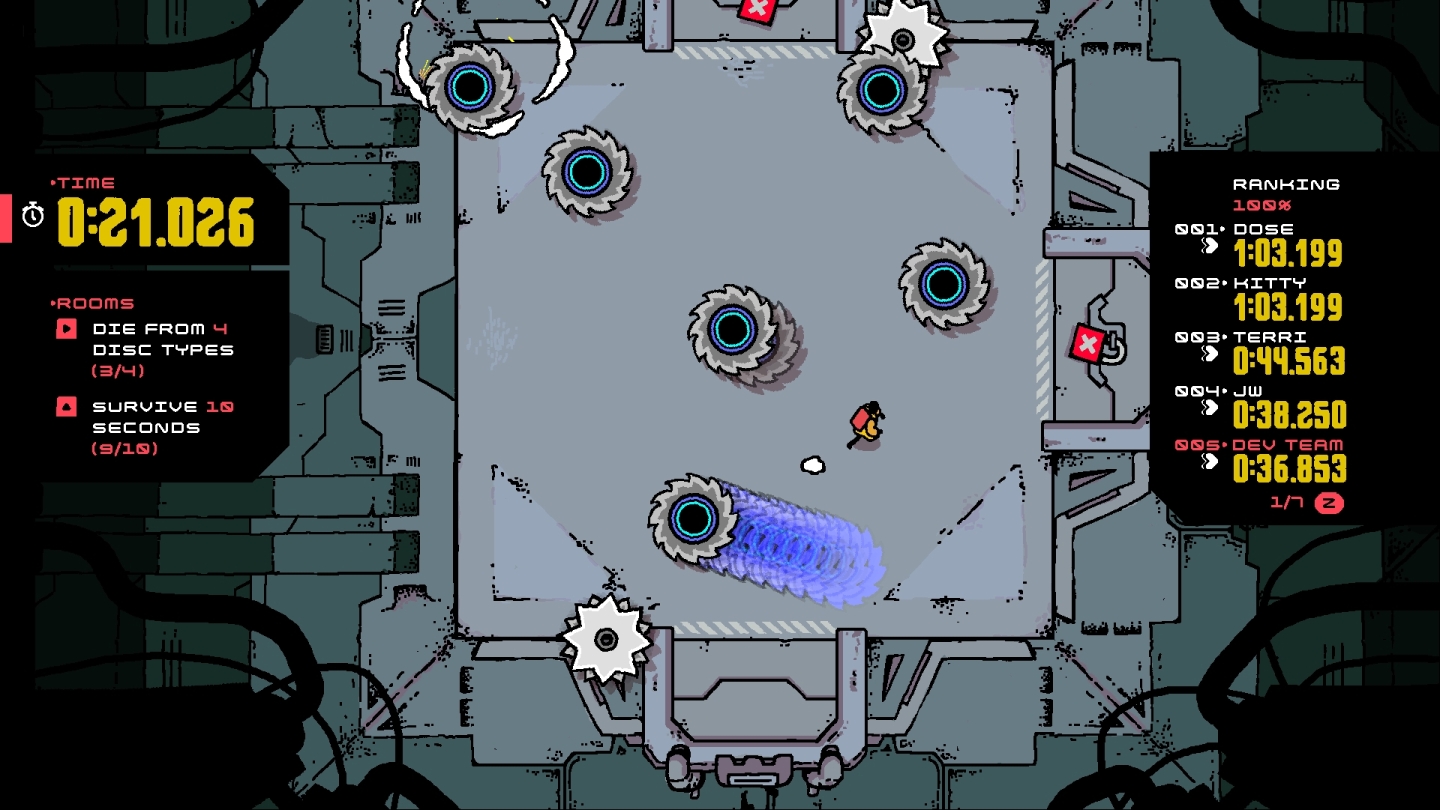 Disc Room has you traveling from room to room on the ship, but actually accessing each room connected to it requires different goals. The most basic requirements will have you trying to survive for a certain amount of time in the current room or trying to survive for a combined total amount of time in the current zone/group of levels. But death is inevitable, as each room eventually fills up with too many discs and no way to escape. And then there are rooms that require you to unlock them by dying to all of the various different types of discs. Yes, you have to deliberately die in certain ways to unlock those. And then there are the ones that get straight-up bizarre, but we’ll double back to those.

All of this not only adds a lot of variety to Disc Room, but it also demonstrates just how gleefully twisted things can get in it, especially with the tone. In many ways, Disc Room plays around with some of the typical expectations of video games such as this by showcasing just how twisted arcade games like this are, just a stream of torment that never ends until you eventually die. This is possibly best demonstrated with the codex/beastiary. In a typical game with this type of feature — ScourgeBringer, to name the most recent example I have — it notes enemies you’ve encountered, but won’t actually add full entries until you defeat them. In Disc Room, though, entries on types of discs won’t be entered until they kill you.

The entries alone take this even further. Typically, notes on enemies will talk about their behavior, give you tips on how to defeat them, etc. Here, they’re written from our protagonist’s perspective, and all they mainly discuss instead of behavior are the absolute, constant surreal horrors they face through them (which does include a nice variety of enemies and attacks, though). You may see a cute little character dodging a bunch of discs in an arcade game setup, but they basically see it as an endless series of inexplicable horrors, bizarre alien beings — nay, Eldritch horrors — that are hunting them, yet fascinating them, begging to be embraced. And the fact that this is happening with what’s basically a standard video game obstacle makes it more darkly funny and twisted. The simple yet fun and cartoonish art style combined with Doseone’s incredible chippy synth soundtrack help the contrast even further. 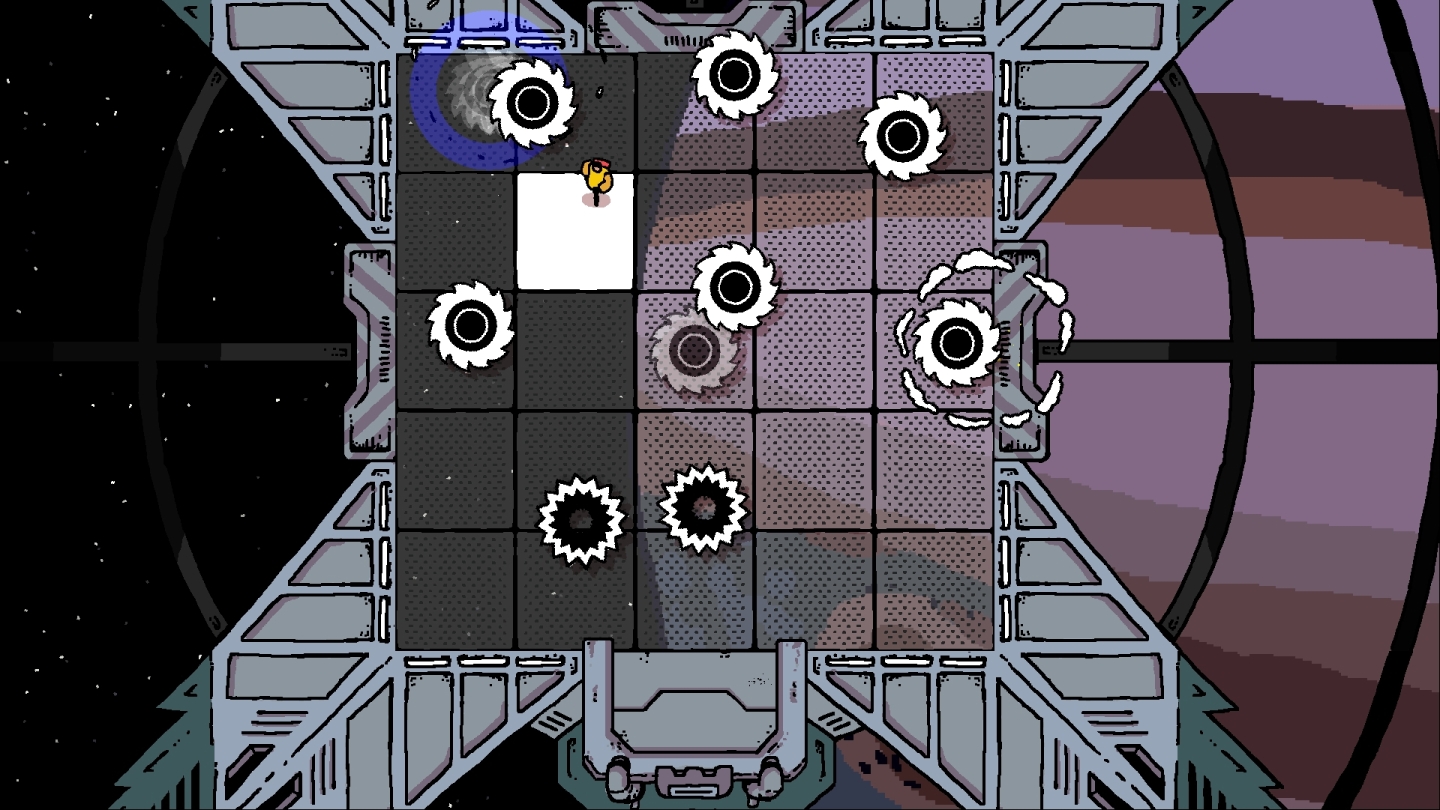 The artwork also surfaces in little comics advancing the plot after defeating a Guardian in each zone that acts as a boss. It’s not the deepest tale, but an interesting one. More important are the Guardians, who change things around when it comes to defeating them. Instead of outlasting them for as long as possible, they start with a set amount of time on the clock, and then they drop orbs throughout the room. Every orb you pick up decreases the timer as you try to hit zero, and they make for some nice and challenging battles. They also embody the various gimmicks in each zone nicely, which play around with the clock even further. In one case, the timer only activates as long as you stay within a central circle, another may have you gaining time via panels you run across on the floor or dealing with a dark room that has blinking spotlights. It’s simple yet clever stuff that keeps you on your toes.

If there is one notable flaw with Disc Room, it’s that the abilities you earn can feel underwhelming. Out of all of them, the only one I fell back on constantly was slow motion. The cloning ability is nice, but limited in ways to can fill it up in order to activate it, the ability to absorb a single disc doesn’t do much, and blasts are also a bit limited in their use. From a basic gameplay perspective, they could stand to be a bit more useful. But here’s the thing: some of those abilities are less about surviving a giant group of discs and more about solving the various riddles. 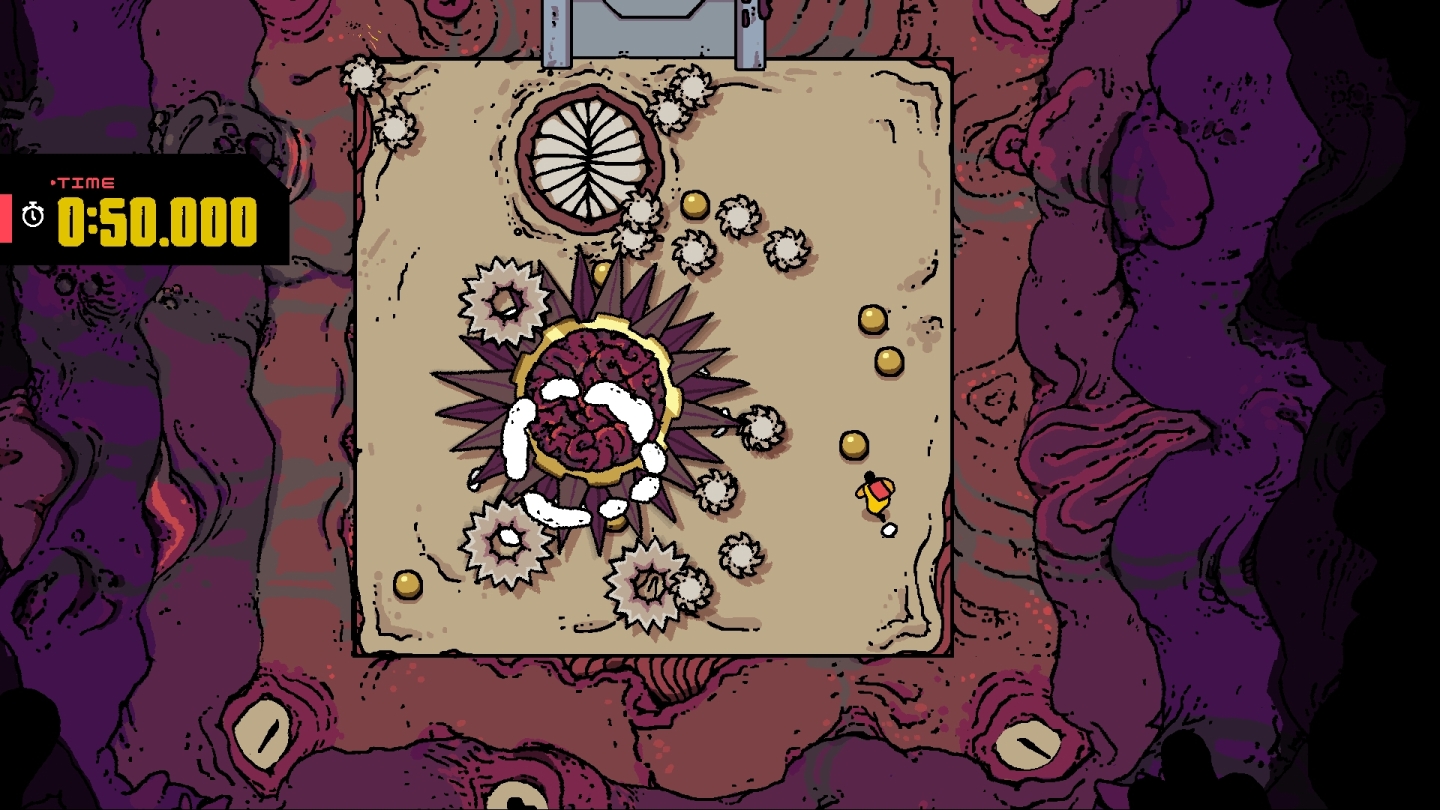 Disc Room may not be the longest game, clocking in at about only three hours or so (though it then lets loose with a twist on the unlockable Hard Mode), but it has its ways to encourage replayability. Sure, you have the traditional leaderboards to work with, but then you have various secrets to unlock on the form of various room requirements, the ones alluded to earlier that get all nice and cryptic. Riddle me this: how do you survive a room for zero or less seconds? How do you survive ten seconds in a pitch-black room filled with no light and half a dozen discs? How do you die in a room with four discs when the room only contains two of them (if you don’t want spoilers, skip to the closing comments, but long story short, it’s great stuff)?

The answers, respectively: you use slow motion immediately when the room begins because the clock stops when you use it and march immediately into a disc, you absorb a disc that lights up one room and let it loose in the dark room, and you absorb a disc that splits into four different discs and set that one loose as well. And those are just the ones I’ve been able to solve so far. It’s insanely clever stuff that allows things to get more cerebral for a good balance, and it adds to a lot of mysterious atmosphere around the ship (especially with the golden rooms). The end result is truly a classic video game challenge, one that encourages experimentation and exploration even further…even if said exploration means coming across even more new discs to die from. 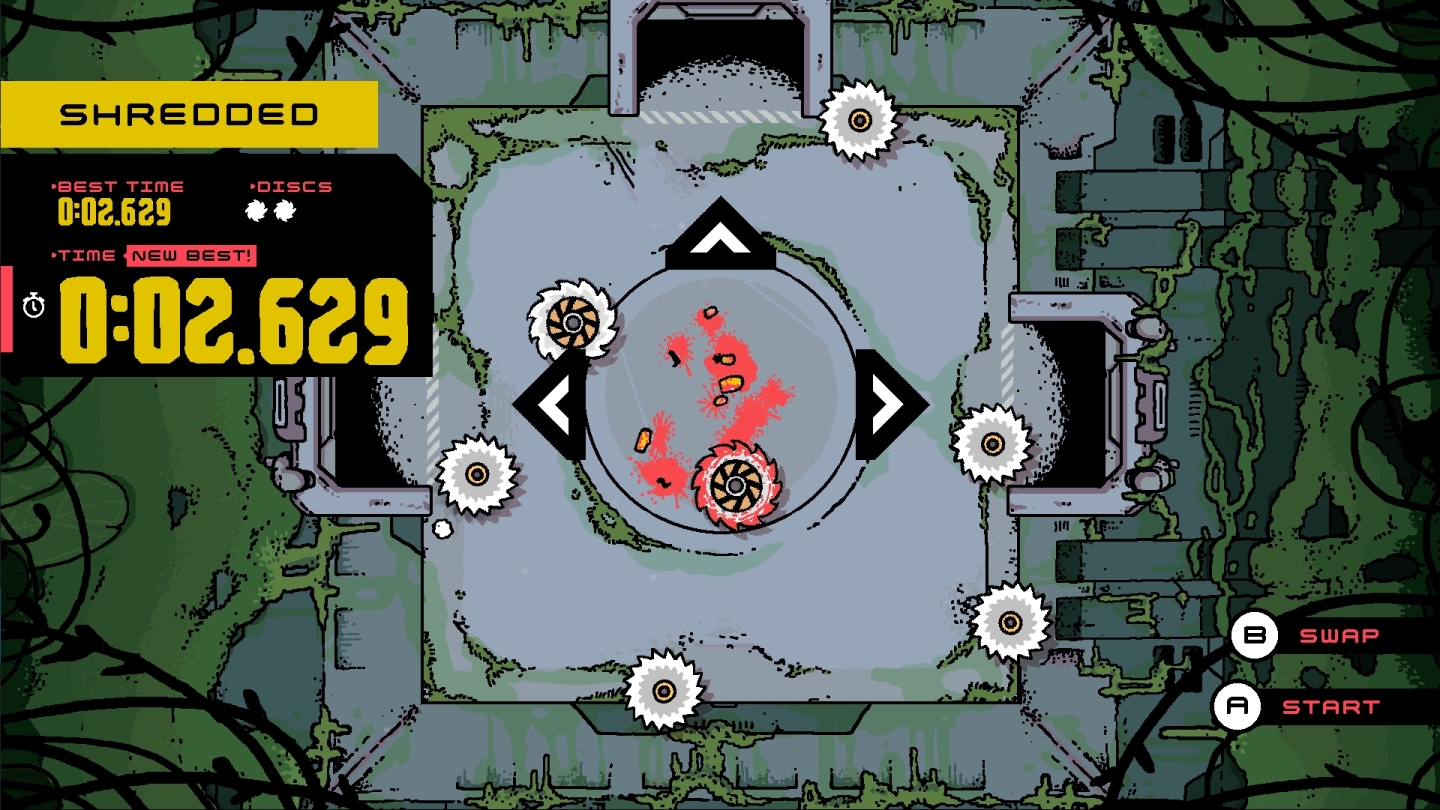 Disc Room expertly blends together the simple yet unique mechanics of Minit and the lightning-quick carnage and quick challenges of High Hell, so yes, the end result is akin to peanut butter and chocolate. Disc Room is a joyfully insane experience that delivers a terrific dose of old-school arcade action, all wrapped up in an innovative and attractive package, with a set of tricky yet highly intriguing and nicely-designed puzzles to act as the cherry on top. In a way, there’s something for all types of gamers here, so make sure to not miss out on this gem.