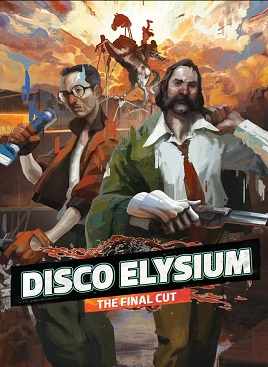 Despite the large latitude of wiggle room the genre itself holds, the role-playing game has been a tad stagnant as of late. This is not to argue that there have been no standout titles in the realm; there’s been plenty of entries to devour the hours and leave the player wanting more. RPGs, however, haven’t pushed the bounds beyond mixing action or strategy into the stat-juggling mix. Even the blended styles can trace their lineage to games that go back decades. Disco Elysium broke the streak. It didn’t do it by pushing into brand new territory. Instead, the game decided to focus on story while allowing the player to completely change the state of the world through their choices. Foregoing a massive map, developer ZA/UM created a densely-packed environment stuffed with intriguing characters, expansive lore and a wild amount of variety in how things can turn out. Post release, though, the developer’s success allowed them to build upon the game to create the final product that they truly wanted, resulting in Disco Elysium: The Final Cut. This release also expanded the platforms to include consoles, which is a boon to couch gamers the world over.

The game opens with the player taking the role of a nameless shlub who discovers that he cannot remember who he is. Awakening with a hangover that could cripple a games journalist, he stumbles about a trashed hotel room, trying to piece together all that he can before realizing it’s fruitless. After dressing, he stumbles out and begins asking around, learning that he’s a police officer who is supposed to be solving a recent murder that took place behind the hotel. Soon, he’s introduced to his partner, Kim Kitsuragi, and the pair are off to solve the murder, as well as the mystery of identity.

To be truthful, the setup doesn’t sound all that intriguing as amnesia has been a tired trope for more than two decades. In practice, Disco Elysium is the first title in a long time that uses it to proper effect. The city of Revachol is set in a world that feels similar to the real world, but with an unsettling sense of wrongness permeating the streets. It doesn’t help that the player is more confined to a smaller piece of the larger city, focusing on Jamrock. This is a rundown area experiencing a tumultuous strike, with employers and unions at each other’s throats, while scabs try to use the opportunity to make a living. Drug abuse is rampant, racism riddles way too many people’s way of thinking, and opposing viewpoints fight to become dominant. Most are slow to trust, and those who are immediately outwardly friendly typically have ulterior motives. It’s a disaster of a town where the amnesia of the protagonist, along with the madness that seems creeping at the edge of his psyche, almost seems pedestrian in comparison. The developer built a plausible dystopia in an imagined world and it feels like it could become frighteningly real. 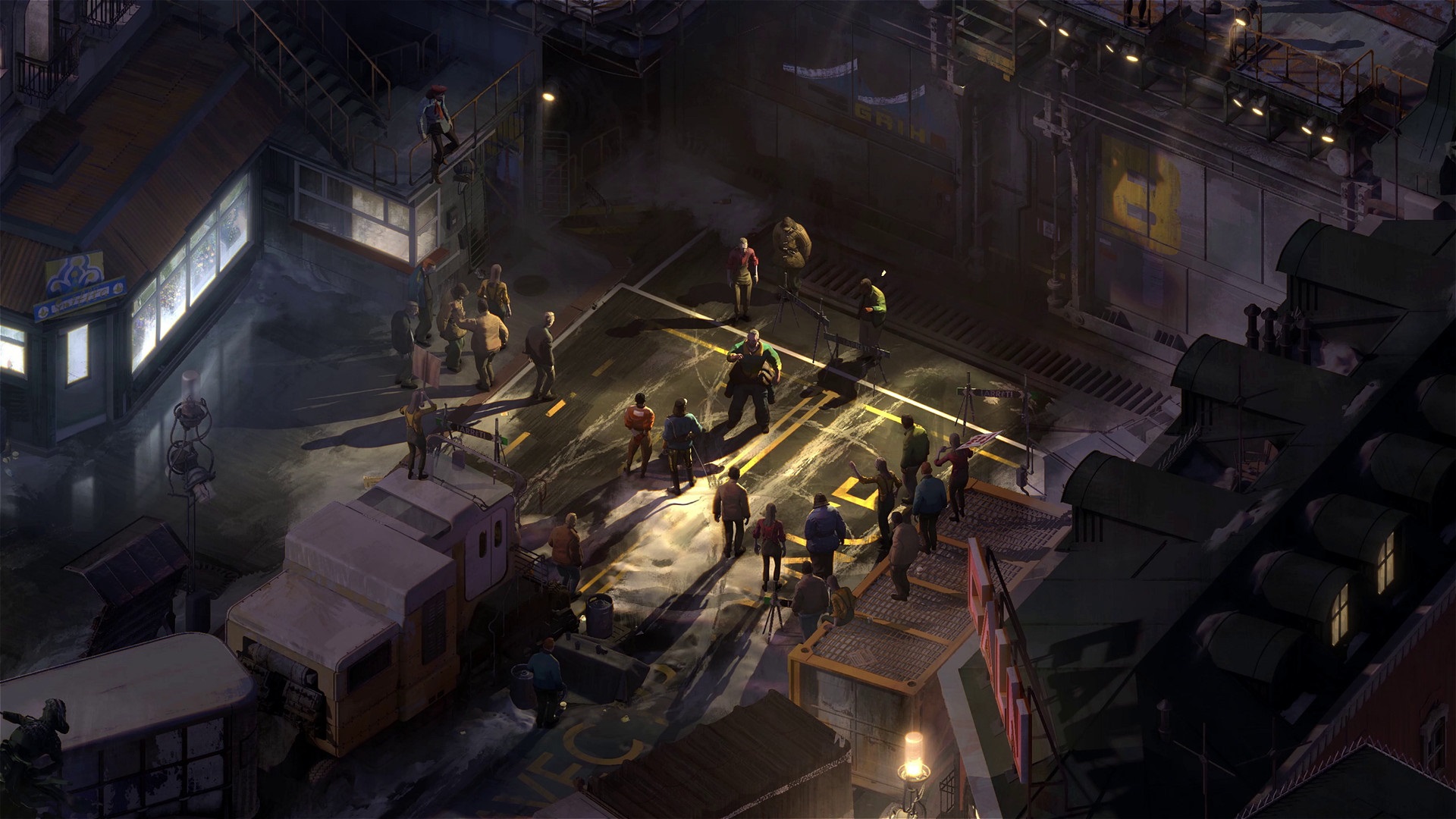 Underlying the story and world is one of the more interesting RPG systems. There are four main categories: Intellect, Psyche, Physique and Motorics. Within each are substats against which pretty much everything is checked. For example, in talking to the union foreman, he might claim that a folder on his desk is something extremely important to the player. The “Drama” skill, which is part of the Intellect stat, is rolled against to see if the protagonist sees through the lie. Most of these checks are done automatically and offer up the additional information in the dialogue window, so there are plenty of events and pieces of knowledge that will be missed on one play through only to become known using a different build on another. To help all of these moving parts funnel into a cohesive narrative, there are more overt checks, as well. With these, the player can leave the option, switch out some gear and go back so that the best chance of success is available. Some checks can even be retried.

What is remarkable about all of these systems is that the game still manages to avoid the trap that Telltale Games’ titles fell into, where the end is the same no matter the choice. Save scumming and trying different answers had a tendency to yield different results that changed the actions around the player during play, to the point where it became obvious that this was a title that can be played through repeatedly for different experiences. Repeated playthroughs are almost necessary, in fact. Part of this is because the game doesn’t do a great job of explaining some of the systems in place. On my first attempt at play, I put all of my points into Intellect and Psyche, leaving the physical stuff in the dumps. The idea was to play as a personable smarty-pants that was kind to others when they deserved it or able to outwit the opposition when kindness is not merited. In the opening scene, while getting dressed, I tried to reach a tie that was hanging from a ceiling fan. I failed the roll and the protagonist had a heart attack, keeled over and croaked. Lesson learned, I restarted the game, simply selecting one of the three pre-made templates, and dug in.

That isn’t the biggest gripe regarding the systems, though. The true complaint would come in the form of the Thought Cabinet. Throughout play, the character will come across new concepts to mull over. These can be “Internalized” in the Thought Cabinet, with the concept considered while exploring and interviewing the neighborhood denizens. Eventually, the train of thought is completed. Completing these boosts a sub-stat, though with a penalty to another. The kicker is that a skill point is required for discarding one of these thoughts; a real bummer as it does feel like one is always just scraping by on the stat checks, making each point extremely valuable. Had this been known in advance, I would have been more selective in thoughts. In fact, I only learned about it in a loading screen well after it was too late. The fact that skill points are also needed to open new slots in the cabinet does make sense at least. 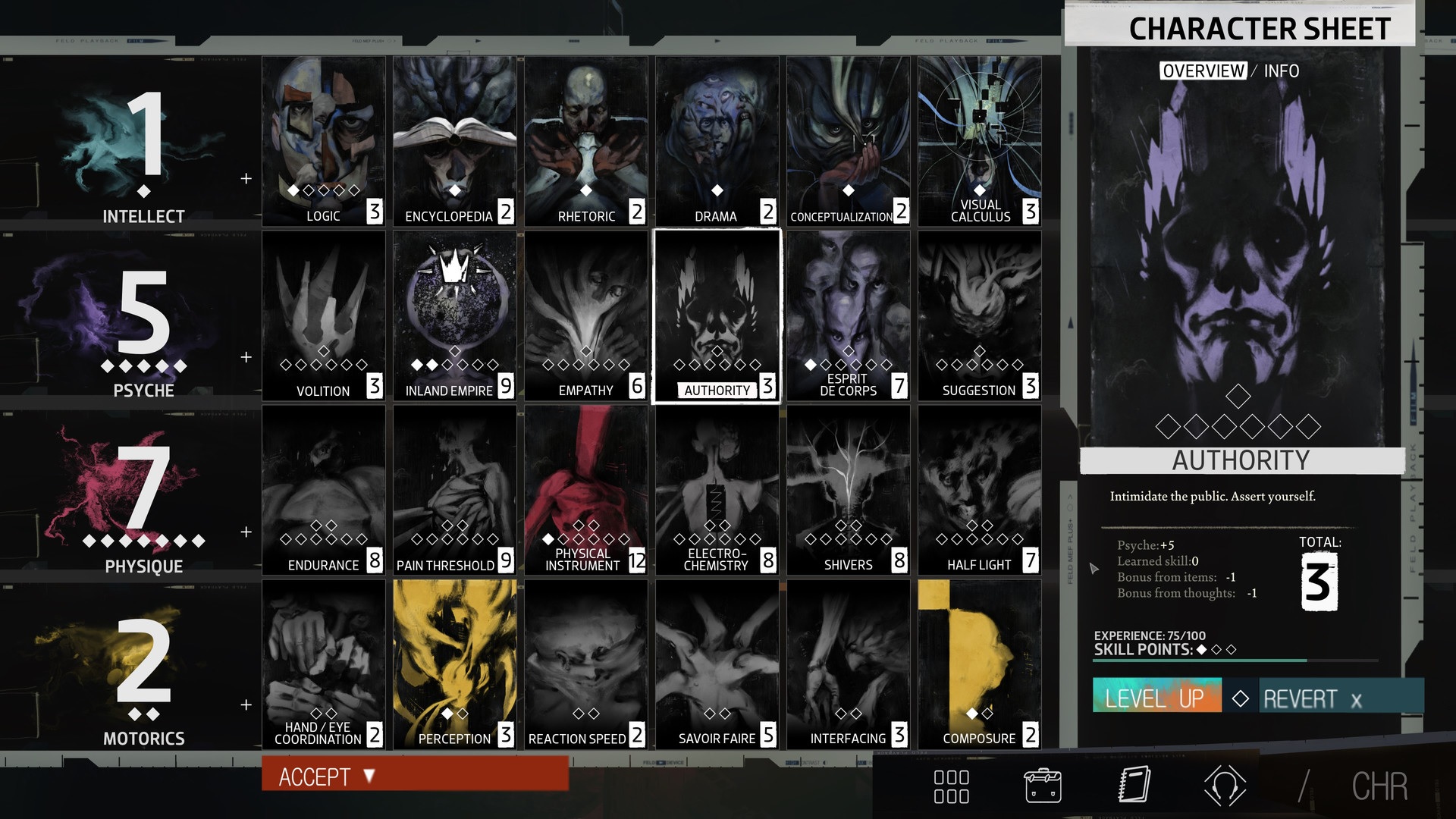 Still, this is a minor complaint for a game this deep, with such fantastic writing. The history of the world is detailed and enthralling, the dialogue believable and rich. Just mundane small talk or learning about the backstory of a random truck driver trapped in gridlock is always interesting. There’s a wit with which the writers imbued with the dour world that keeps the proceedings from becoming a miasma of gloom. Dealing with the heady issues and themes of the game is much more manageable when the proceedings are peppered with Kim’s incredulous asides, the interruptions of a necktie filled with bloodlust (see the aforementioned creeping madness of the protagonist) or just random snark from a citizen.

The humor comes through organically, as well. At one point, I found myself on a roof, looking at a the protagonist’s discarded coat hanging on a raised walkway just below. Making the jump required Savoir Faire, a stat that the character’s pants and shoes were currently lowering. To improve the chances of making the jump, I removed these items, resulting in a tighty-whitey jump down. The absurdity of the moment, the fact that dropping trou improves savoir faire, not to mention the stunned Kim looking on, might be one of my personal favorite gaming moments. 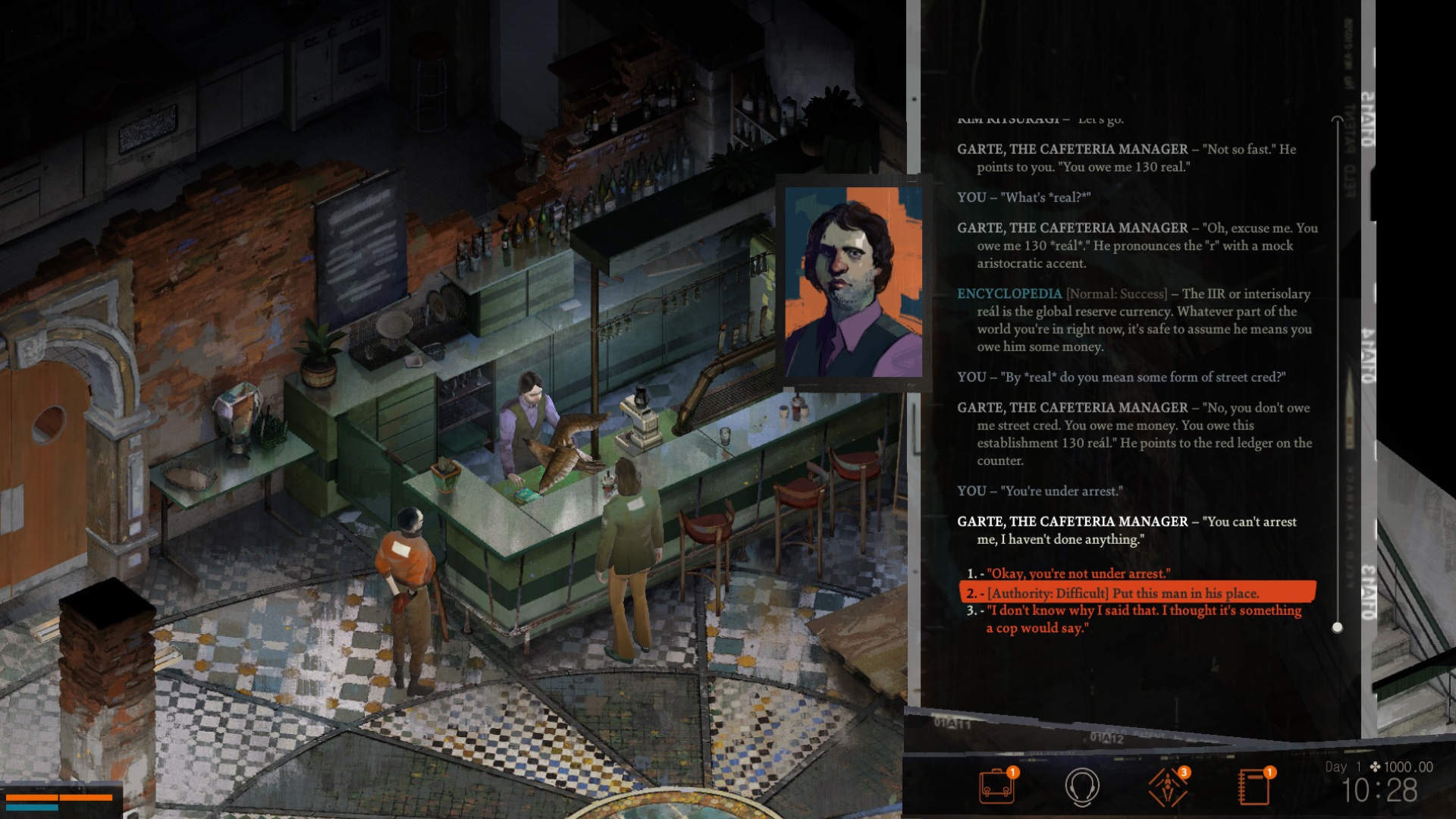 For veterans of the game, this is all old news. What’s new in The Final Cut is the fully-voiced dialogue as well as the addition of the Political Vision Quests. The acting for the dialogue is mostly great. While there doesn’t seem to be a ton of seasoned professionals lending their voices, nobody seemed terrible at it. Truthfully, I thought Kim’s actor was lackluster at first. As I got to know the character, however, I came to learn that the performance was spot on for the reserved officer becoming more and more weary while putting up a professional front. Overall, the voice acting adds to the experience, making the world feel more real. Discussing the Political Vision Quests in greater detail would delve into some spoiler territory, but it can be said that the Communism one that I went down (due to not wanting to use a skill point to forget the internalized thought that led to it) was a satisfying and interesting addition.

With the port to consoles, one does need to discuss the controls. Pre-patch, they were awful. In order to play the game, one needed to hold the controller in a bizarre fashion so that the index finger can use the right stick to select an item in the world, and then the middle finger to press the controller button to interact. This is mentioned to again compliment the writing as I was willing to put up with that nonsense to see what happened next. After the patch, the controller becomes a much more viable option. Exploring the environment and interacting with items works mostly well. There are still some hiccups with navigation. For example, there’s a particular staircase near the harbor gates that are a pain to get down. For some reason, the hero can climb these just fine, but does become stuck on descent more often than he should.

Finally, it should be mentioned that I did experience a crash that ate a save during my time with the game. In a game with so many moving parts built by a small team, the fact that this happened is understandable, despite the fact it happened after the 1.2 patch. It was frustrating to lose a half hour’s worth of progress, although another patch is set to come out that will probably render this mention moot. It is mentioned in the interest of being complete with the experience I had. 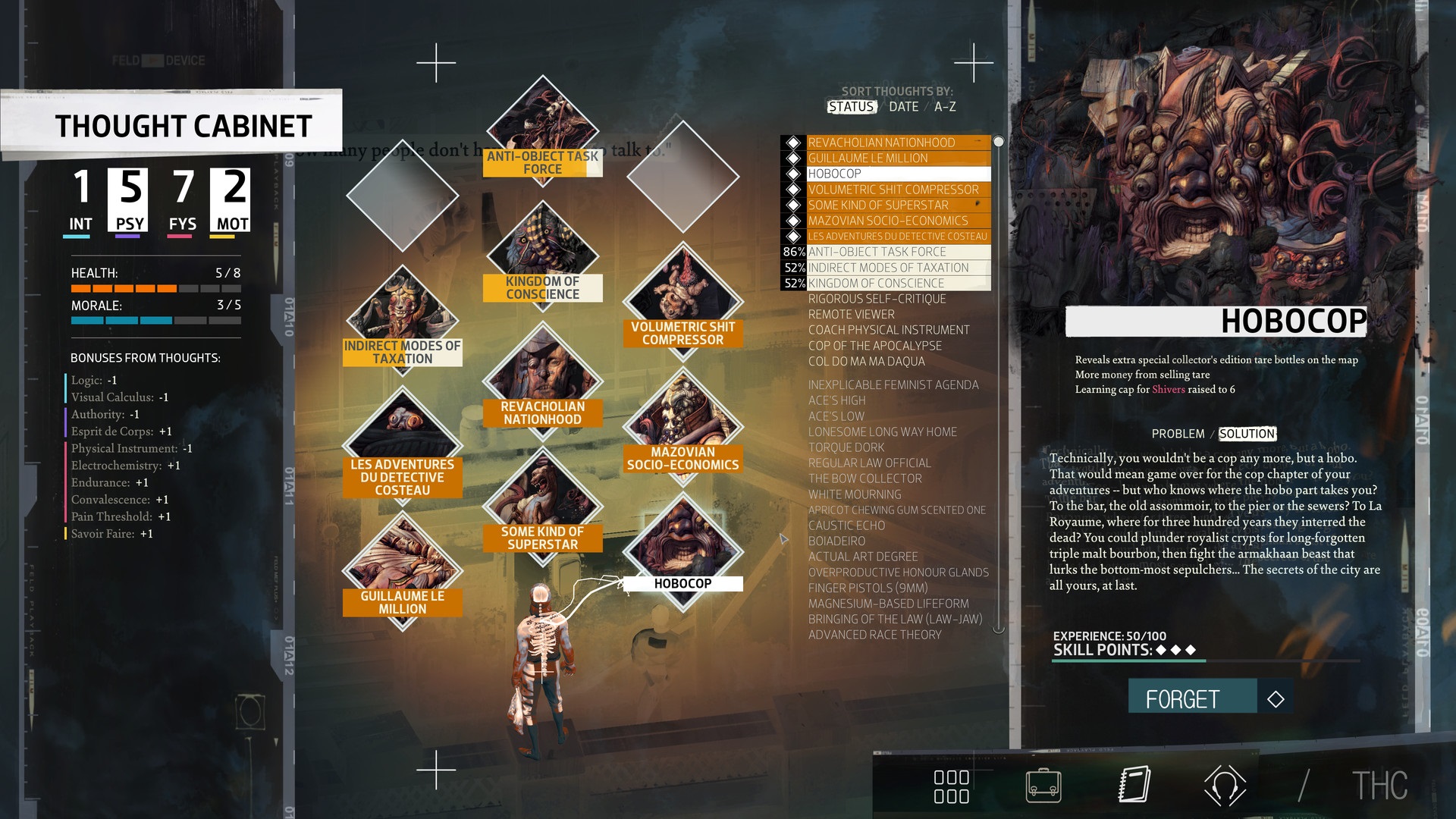 There are valid criticisms to level at Disco Elysium: The Final Cut. The console port wasn’t handled as cleanly as it could have been and new players are likely to get blindsided in a way that just a touch more information up front would have avoided. Even so, the writing, world and systems elevates Disco Elysium into one of the most deep RPGs in existence. This is an evergreen title that will be talked about for years to come. The initial release earned a never-ending stream of accolades for good reason. The fact that more people can now play it, and everyone gets more content, is just awesome. It cannot be described as flawless as there are obvious growing pains. Still, with the sheer breadth of the game and the value to be found here, Disco Elysium: The Final Cut deserves its place in the pantheon of the greatest digital role-playing games ever made.