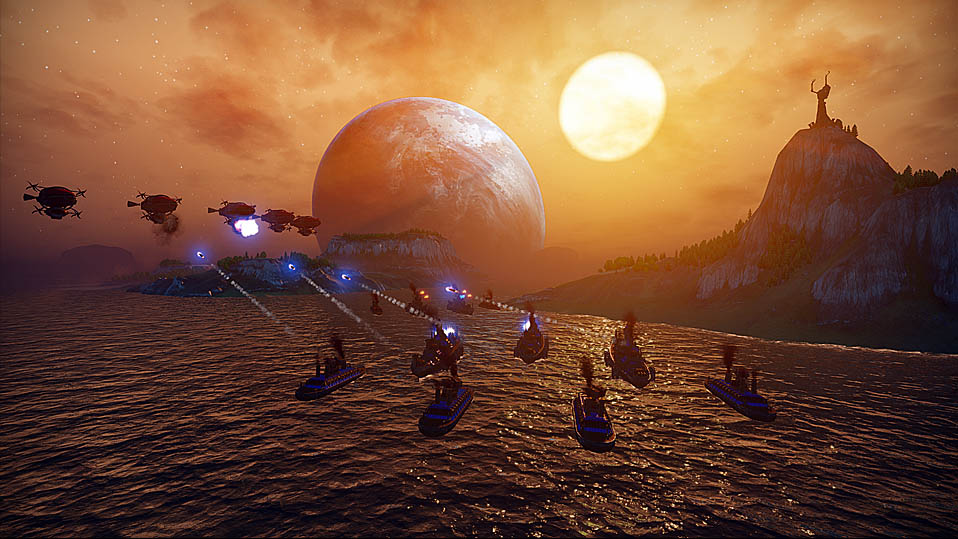 Larian Studios has always been known as the “Divinity developer”. The last game in the series, “Divinity II,” released to positive critical scores and as its highly acclaimed expansions released, the series grew a dedicated fan-base. There’s no doubt the safest thing the studio could have possibly done was make another action-RPG in the vein of Divinity 2; but that’s not what they announced. Instead, Larian Studios revealed that the next Divinity game would be a mishmash of genres, providing turn-based strategy, real-time strategy and aerial combat, all while mixing in a fair amount of political simulation. Unfortunately, many who considered themselves fans of the past Divinity games spoke-out against the new direction for the series. Stating that they would be skipping this particular entry, citing the fact that Larian really only had experience in RPG development, and that the Divinty series should not leave the genre that made it so popular. This all makes Dragon Commander an astronomical risk for Larian studios.

Dragon Commander opens up with the story of a troubled empire whose even-more troubled emperor was killed by some of his rowdier offspring who were spawned by his love-affair with a dragon who could take the form of a human woman. That’s quite the mouthful. Anyways, it is revealed that you are the late emperor’s one and only good-natured descendant, and just happen to have the ability to turn into a dragon. You’re then recruited by a kind wizard who wants to bring peace back to the empire. So, as you may have guessed, the goal of the game is to conquer all of your unsavory siblings’ land and bring peace to the empire. 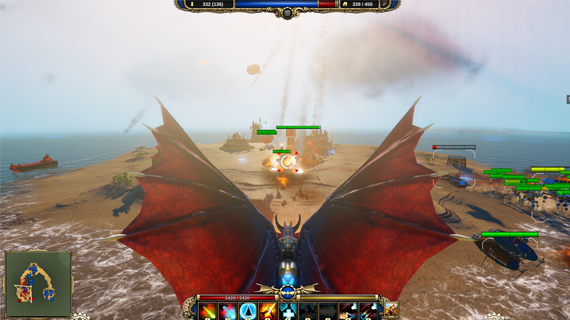 While the story may not be particularly interesting, it does mesh remarkably well with Dragon Commander’s several gameplay hooks which can be broken into three phases. The first is what I like to call the “Civilization” phase, because it plays a whole lot like  Sid Meier’s Civilization. The second stage is the real-time strategy phase and last but not least is the political phase in which you pass or deny the creation of different laws. Cramming all of these drastically different elements into a single experience is pretty impressive on its own. But even more impressive is that they all work really well, and that there really isn’t much skimping on any of the three fronts.

Like I said, the first phase plays very similarly to Sid Meier’s Civilization, the only real difference being that you’re already at war with everyone, so there’s no need to negotiate for peace. This phase shoots into a view of an entire map of conquerable territories. During this phase units can be moved, structures that give small advantages can be built, new kinds of units (or upgrades for existing units) are researched, and new abilities can be unlocked for your dragon-self. This phase is also used to initiate battles; you can either duke it out with your foes in the RTS phase, or you can leave the brawl in the hands of one of your AI generals for a small fee. The one knock I have against this phase is that some of its rules aren’t clearly presented — even in the game’s tutorial. The most confusing one is how to determine how far units can move. Luckily, it’s not very complicated, but discovering how it works does take a unnecessary amount of digging — especially when the game has a tutorial that should (ideally) teach you this sort of thing. 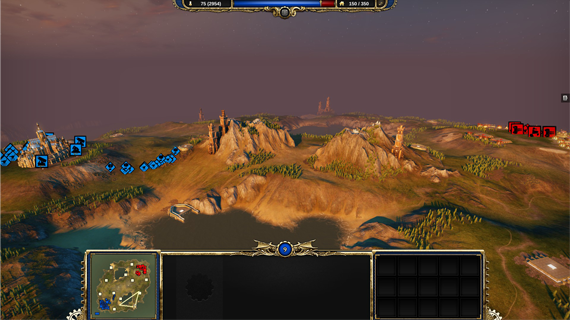 The RTS phase can almost be avoided entirely, but it’s so fun that there’s no reason to not play it. It plays like a pretty standard RTS, you start out with your units at one base, and over time you branch out to several other pre-determined base locations. One of the most interesting things about this phase is how much the civilization phase informs the result of your RTS battles. If your enemy has any sort of advantage over you (more units, better upgrades, etc), you will lose almost ninety-percent of the time, and vice-versa. This is sort of a shame, because it doesn’t really feel like there’s much you can do using your strategic skills, besides adding importance to the Civilization phase that might not have existed otherwise. There are ways to give yourself a slight advantage, though. There are cards available over the course of the game that will summon mercenary units to fight for you during battle, and there is, of course, the whole “you can turn into a dragon wearing a jet pack at pretty much any time during the game” thing.

Surprisingly, the dragon combat feels incredible. While in what we’ll call ‘Dragon Mode,” you can command units, and order for the creation of new units, but on top of that, zip very speedily around the map and shoot fireballs at your foes. Dragon Mode in incredibly satisfying, and can even lead to makeshift dog-fights in multiplayer games. 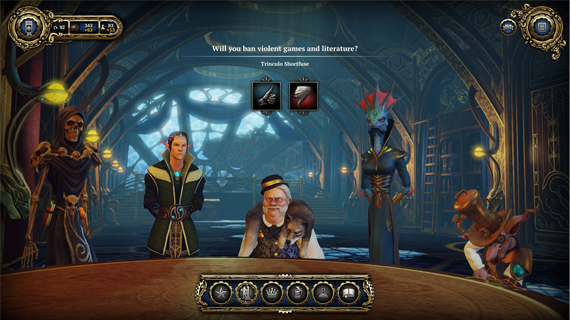 The third phase is quite probably the most intriguing one: the political stage. During this stage, players are tasked with going to short meetings with five of their advisers that are all members of the game’s different races. One will state an idea for a new law, and the others will either agree that it is a good idea, or present their reason for it being a bad one, but it is up for you to decide. I was pretty shocked by this, but the game presents you with all of today’s most hotly discussed laws and gives you the decision to either pass them, or deny them. For example, there’s one point where one of your advisers explains that there was a recent tragedy where a young wizard went wand-happy, and purposefully slaughtered several of his peers. It is also mentioned that he played lots of “games,” so the adviser states that it might be a good idea to ban violent games and you’re given the choice. Sound familiar? The game is full of these highly-controversial questions, and being the one in charge of passing/denying these laws gave me a real sense of importance. At the same time, however, your answers carry a great deal of weight. Each answer has a consequence. Your answer might make your population go down, make your gold-income go down or make your factories’ production slow.

It’s also worth mentioning that the game looks gorgeous, particularly in the RTS segments. Despite the fact that a bulk of the time in the phase is spent zoomed very far away from your units, by zooming in you’ll discover that they are actually very detailed. In addition to that, the in-game dialog is well acted-out and was seemingly written with great care. There are also a generous handful of clever lines that made me laugh out loud. 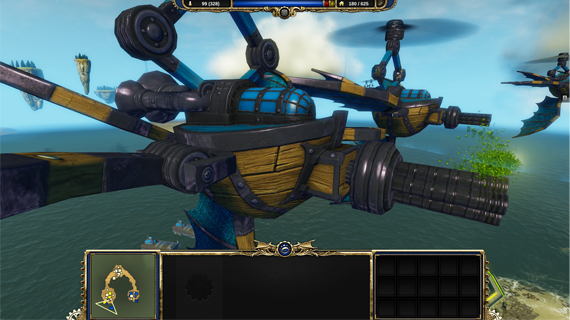 It’s a shame that so many people are opposed to the idea of a new-direction for the Divinity series. Even if its main story leaves much to be desired and some of its rules aren’t presented particularly well, Dragon Commander is a whole lot of fun. I urge everyone, even skeptical Divinity fans, to give Dragon Commander a shot — especially if they’re amused by the notion of a dragon wearing a jet pack.