Let’s face it; the rhythm genre hasn’t seen a whole lot of innovation in the last couple years. DJ Hero may not be perfect and it certainly has a high cover charge, but it has the most fresh approach to the genre seen in a long time. Sure you have your timed button presses, but when you take them alongside all of the crossfades and scratches, it’s hard to not appreciate its unique control style and soundtrack.

The game features 93 songs, the majority of which are presented in the form of two songs going head to head in a mashup. These mashups are entertaining in their own right, with unpredictable ones such as Eminem vs Beck or even Vanilla Ice vs Paula Abdul throwing a certainly unique blend into the mix. Playing a song involves effectively crossfading, tapping, and scratching your way along to the beat through a song in a format that is similar to Guitar Hero, but far different in execution.

Your right hand mans the turntable itself, with your thumb resting on the side of the turntable and your next three fingers resting on the green, red, and blue buttons. “Notes” come down three note highways, which you must simply tap the corresponding button when they get to the hit zone at the bottom. However, notes that are stretched along the highway are called scratches, during which you must hold the corresponding button down as you spin the turntable back and forth. At lower difficulty levels just spinning the table at all will suffice, whereas in the hard and expert difficulty levels you must spin it in specific direction patterns along to the beat. 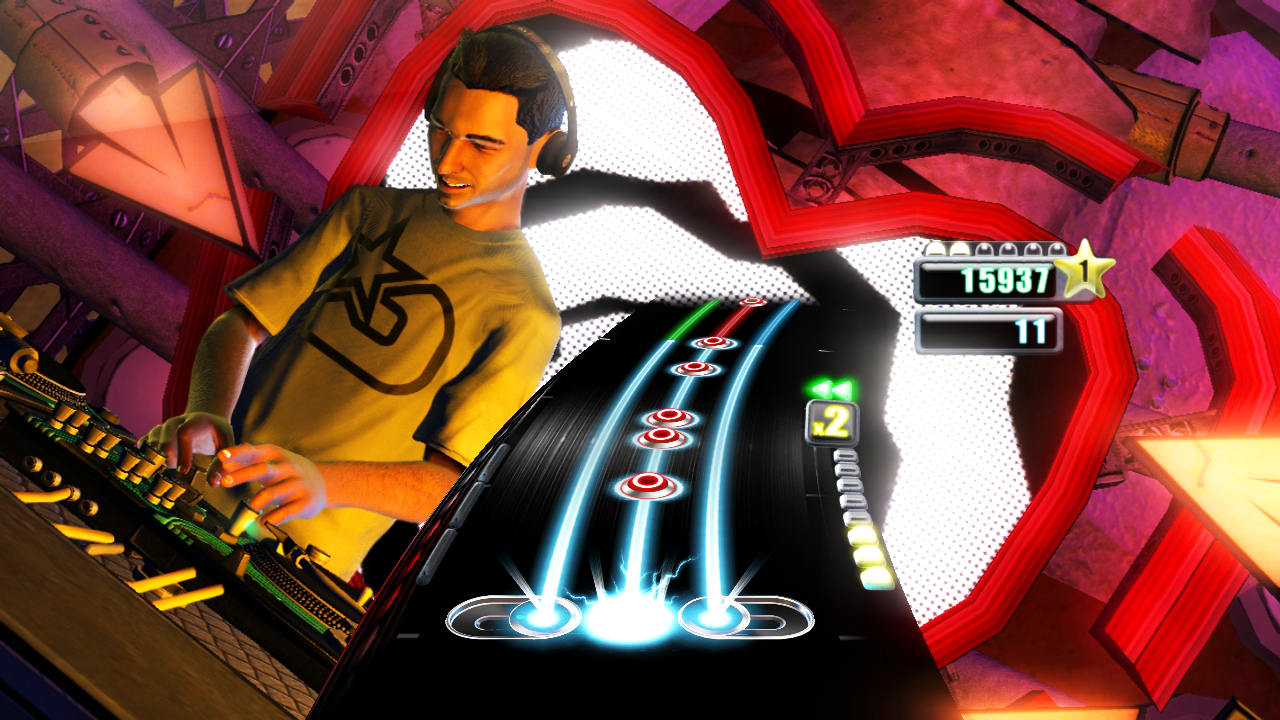 Your left hand controls the crossfader, effects dial, and euphoria button. You see, the left and right note highways can shift out farther away from the center, during which time you must time your crossfader to quickly move it to the left or right position. Doing so shifts the mix balance over to one song or the other, which can sometimes happen in the form of a crossfade spike where you very quickly snap the crossfader over to one song and then immediately move it back. The effects dial normally lets you select from different sound samples that you can trigger during specific sample zones that occur in a song (think along the lines of “Yeeeeah boyee!”), but in certain parts of a song it can be used to adjust the sound of one or more of the note highways to gain you more points.

Certain sections of songs will glow bright blue, and completing these sections will fill up one section of your euphoria bar which has three sections in total. Once you have at least this much you can hit the euphoria button to trigger euphoria mode, which not only boosts your point multiplier but also makes crossfading automatic and lets you concentrate on hitting your taps and scratches. If you get through enough notes without making a mistake you unlock a rewind ability which is triggered by simply spinning the turntable completely around counter-clockwise. A rewind takes you back a few seconds and lets you continue playing from there, and not only do you retain the points you had but you also have an increased point multiplier for the section that you rewound through.

Once you get the controls figured out the songs are great fun to play through, given that most of them will be completely fresh and are usually at least interesting mixes, even without knowing some of the songs beforehand. However, while during some songs you clearly feel like you are doing the mixing at other times you really feel that you are just playing along with a song and that your actions aren’t really being represented. Additionally, some songs are used a bit too often, such as Hollaback Girl, Disturbia, and Shout each showing up three times in different mixes. One touted feature is the ability to have one player use the turntables while the second plays a guitar, though it is only usable with a small fraction of the songs. 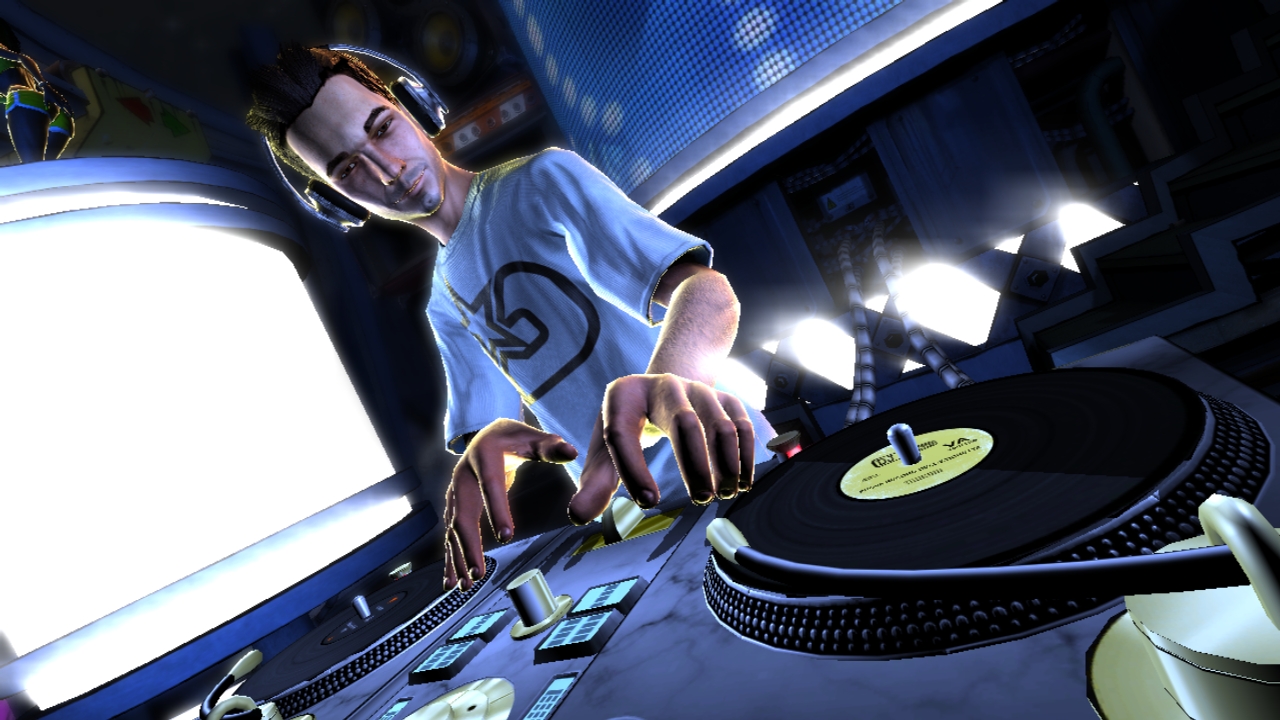 That being said, DJ Hero is a quite fresh approach to the rhythm genre despite the areas where it obviously falters. It’s certainly an expensive game to grab, but its unique style of play and well-done mashups do a good job towards warranting it. Whether or not the game fully covers that ground depends on how much you enjoy DJ-styled music, but even if you only have a passive liking of the style, DJ Hero shows that it is still entirely possible to have a rhythm game come out that manages to be completely different than any that have came before.