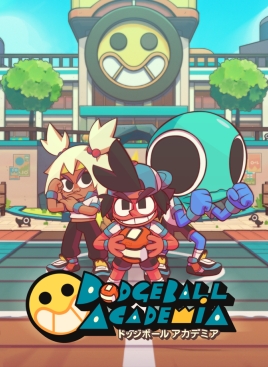 How surprising is it that we somehow wound up with two indie dodgeball games this year? While baffling, as Knockout City showed, there’s just something appealing about taking a sport as basic as dodgeball and building upon it in order to create a work of elegant simplicity. In the case of developers Pocket Trap, thought, they decided to go the Golf Story route and create a sports RPG built all around dodgeball, which is another surprise. But do all of the surprises actually add up to create a good game?

Set at the titular Dodgeball Academia, this is a world where everything revolves around dodgeball (to the point where even chests are unlocked with stray dodgeballs instead of keys), dating back to the Dodgeball Wars from ages ago, which were eventually resolved with one mighty hero’s dodgeball, the Hero’s Dodgeball. This continually-spinning artifact now helps unite everyone via the sport, and at the academy, helps promising students unlock special powers within themselves after touching it during the opening ceremony. This is where we join Otto, the latest student at Dodgeball Academia, eager to join and prove themselves on the court. And just in time, as the first week of school involves an opening tournament. So now he needs to form a team/party and take place in a series of dodgeball matches across eight episodes/chapters, all while getting used to the academy and the oddities that show up, some more serious than others…

Despite the magnificence built up during this ceremony, though, Dodgeball Academia itself is modestly-sized, with Otto’s initial tour being quick, and the relatively small size of the academy is arguably both a blessing and a curse. On one hand, it means that getting around is quick and that you don’t have to go out of your way to find any of the side quests and optional dodgeball matches in each episode, and it prevents any instances of backtracking from ever feeling tedious. On the other, though, it also means that it’s only a short walk to the infirmary (or the person in the lab who can heal you), which means you’ll never need to stock up on healing snacks from the cafeteria, which reduces the difficulty level (although on the plus side, that means more money saved for the juice that gives permanent stat boosts). 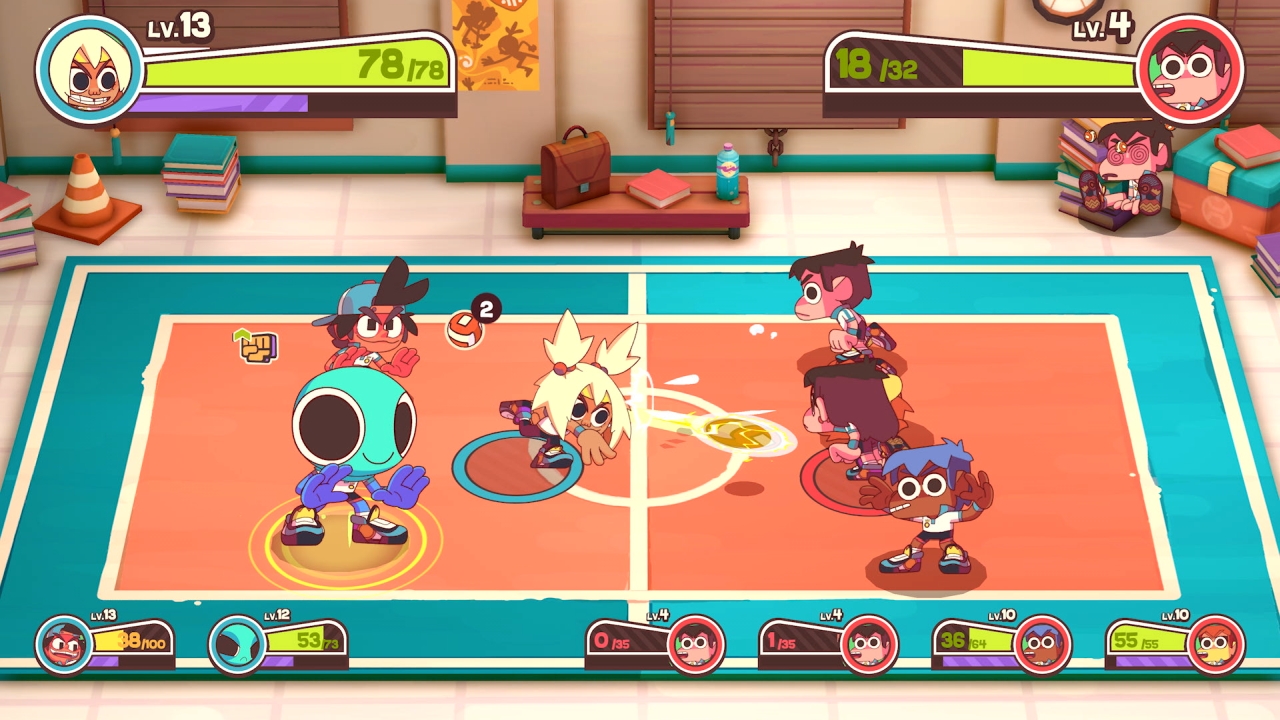 One could probably go on for a while listing a lot of various small flaws in Dodgeball Academia. Some of the quests can get repetitive, since a lot translate to “go to a place and engage in dodgeball battles.” Some pieces of equipment, like the Hall Pass or First Aid Kit, can feel overpowered. The game never explains how to open the various locked chests found scattered across the grounds, and instead you stumble across how to do so by examining one after a certain character joins your party and then goes “oh, by the way, I can pick locks” after this examination. A later episode features an actual platforming section that’s not difficult, but sort of dull and dragged out. And so on, and so on.

And yet none of that seemed to matter overall, because in spite of any faults it has, Dodgeball Academia is just plain fun. The second I unleash a barrage of dodgeballs on on enemy and watch them all smack into my foes with a satisfying impact, any issues I have with the game seem to melt away instantly. The combat is satisfying, and much like Knockout City, the gameplay is beautifully simple. One button to throw or do charged throws, one to catch (or counter, depending on the character), one to unleash your special “Balltimate” super moves when you’re holding a ball, etc. And it’s all nicely based on timing, trying to catch balls at the right moment or line up certain shots.

Dodgeball Academia, though, goes even further with the special tricks. For one, aside from the Balltimate moves consisting of tornadoes, giant fireballs and the like, each character has their own unique charged throw, like spiral shots or ones with an electrical charge. Then there are the different types of balls, which include gum balls that trap players in place, cursed balls that block HP gains, or even semi-sentient Baby Balls that can move on their own. It all adds strategy, especially as you try manage all these different attacks from entire groups of enemies, all while switching between your three current team members and trying to figure out who works best for what situation. 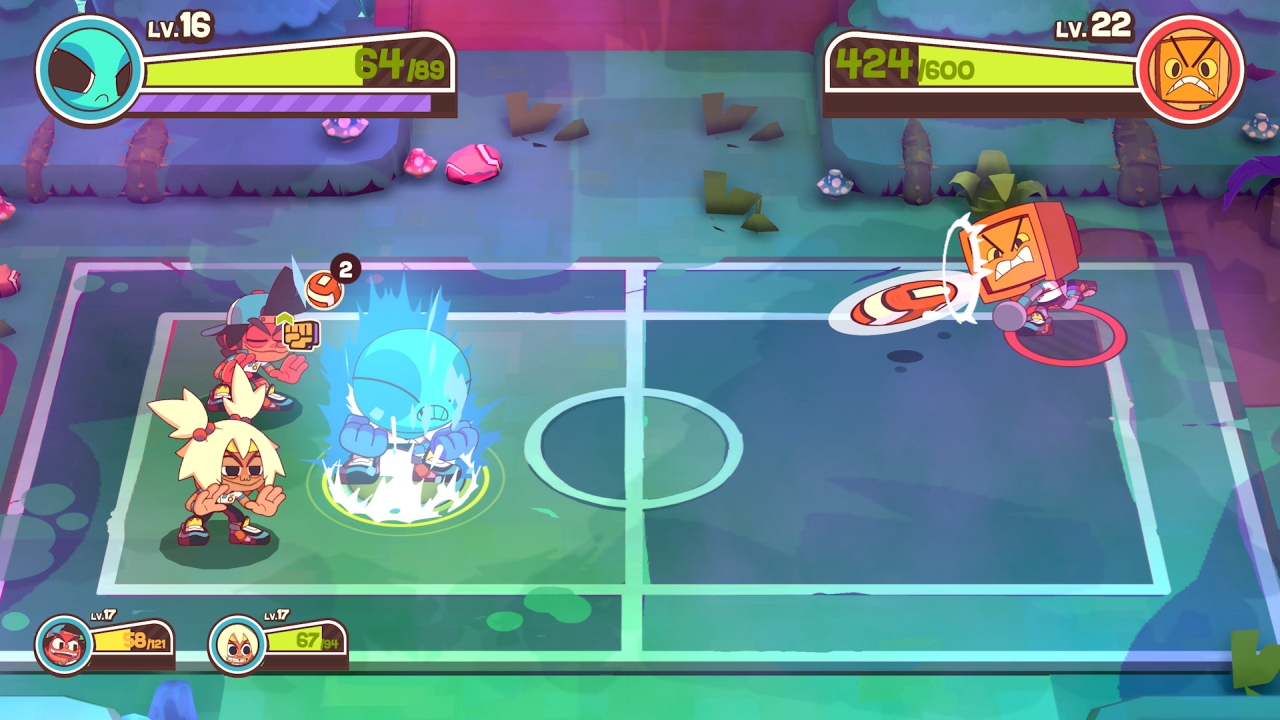 And then there are the arenas themselves, which can not only have different hazards like cars that drive through the court or tall grass that conceals things, but even entirely different rules. There are standard courts where you pick off enemies all at once, but then there are those with “knockout zones” where once a team member is defeated, a new round begins with the defeated player still active on the opponent’s side, where they can grab spare balls and throw them at the opposition, giving you more to work with. And there’s even one “free” zone where the sides don’t matter and players can just run around where they want. They’re all neat, even if the actual game does downplay a few off these gimmicks, but luckily, there’s a full-on versus mode where you can try them all out with unlockable characters and custom rules (unluckily, it seems to be local multiplayer only).

Then there’s the vibrant and eclectic cast of characters that inhabit this academy, and while it’s easy to compare it to a spoof of sports manga or anime in terms of tone, I was more reminded of cartoons like OK K.O.! Let’s Be Heroes that feature a blend of all of these different styles and character types that you’d find in anime and video games. There’s the sports rival, the more serious character with a tragic past, the shades-wearing delinquent, the more explicitly cartoonish character who’s the weaker one, and many others, including of course, our spiky-haired, non-booksmart, idealistic kid protagonist (seriously, put K.O. in a cap and school uniform, and he could be a dead ringer for Otto). Pocket Trap clearly had a lot of fun with these characters, and it shows, with a lot of them being likeable and having a good amount of chuckle-worthy dialogue, even spoofing various tropes now and then. 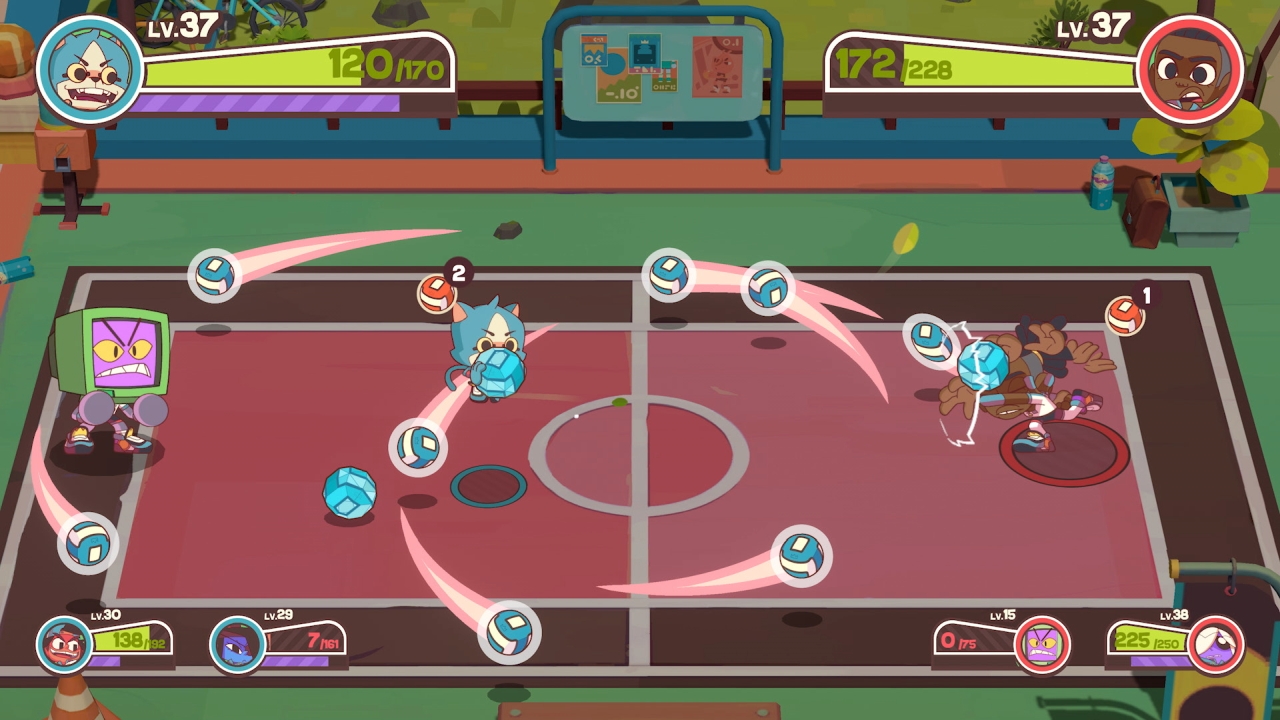 Befitting such an animation-inspired game, it’s also only fitting that things are gorgeous as well when it comes to the graphics in Dodgeball Academia, with the 2D characters nicely standing out among the 3D world, and depicted with a wide array of perfectly vibrant colors. It could use a wider variety of locations with more detail, but as is, it’s still eye-pleasing thanks to the characters alone. And then there’s the soundtrack, with a lot of killer guitar tunes that perfectly fit the action-packed anime vibes. There are even parts that explicitly pay homage to Pokémon’s music, like the healing themes or the sudden whoosh of music when you enter battle, and they fit perfectly as well. Again, it’s a melting pot of various style and influences here, and they all work together.

Dodgeball Academia isn’t exactly the biggest RPG, clocking in at ten to twelve hours (and that’s including all of the sidequests, even), but it feels perfectly bite-sized, managing to fit in a decent amount of challenge, though things may vary depending on the chosen playstyle. But however you choose to play it, you’re likely still in for an enjoyable experience, with an overall story that’s not too complex, but still delivers a swell tale about friendship and true strength that those young and old can enjoy. Also, you can move around by literally rolling around in ball form, crashing into walls along the way. You don’t even need to do that (Otto’s walking speed is fine), but I bring it up all of a sudden simply because it’s fun every time, and “simply fun” is something the game excels at overall. 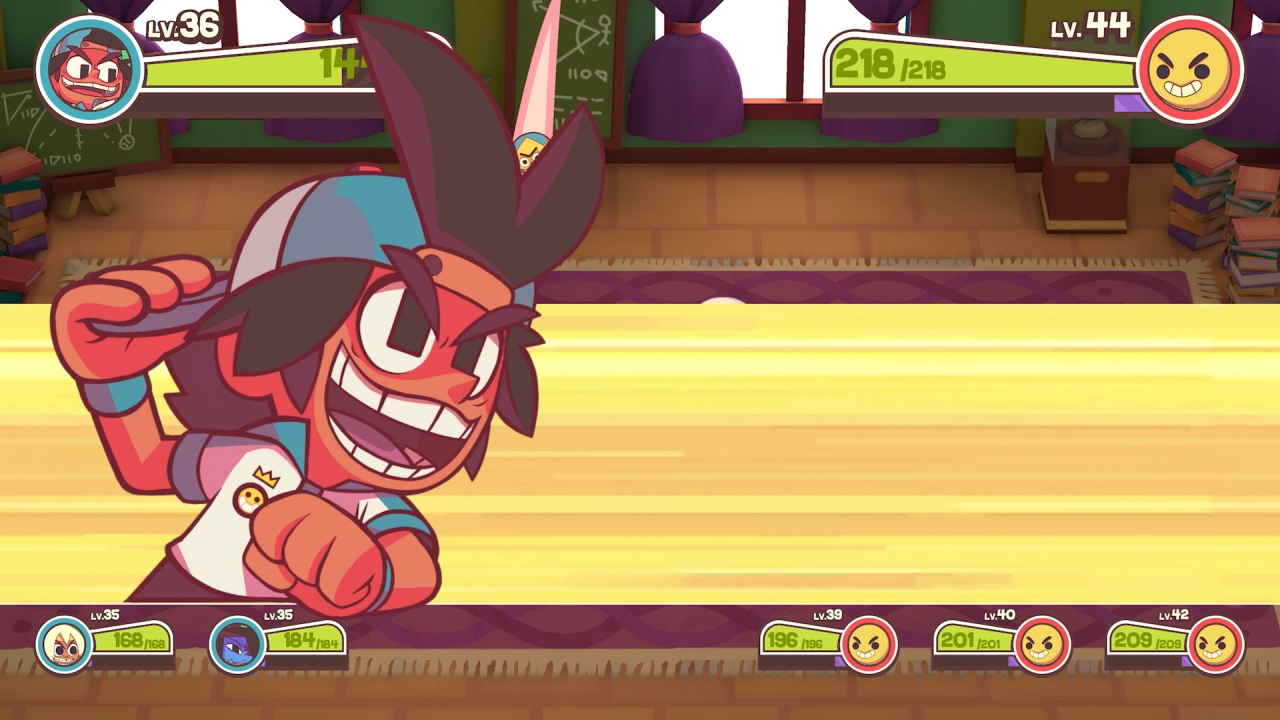 While Dodgeball Academia isn’t a perfect RPG, the intense and amazing dodgeball combat combined with a cast of terrific and charming characters and an eye-pleasing blend of visuals to back them up still make for one quick and enjoyable burst of fun in the end. It might end up only getting second place when it comes to this year’s dodgeball games, but it’s a close race, and it still deserves a trophy regardless.