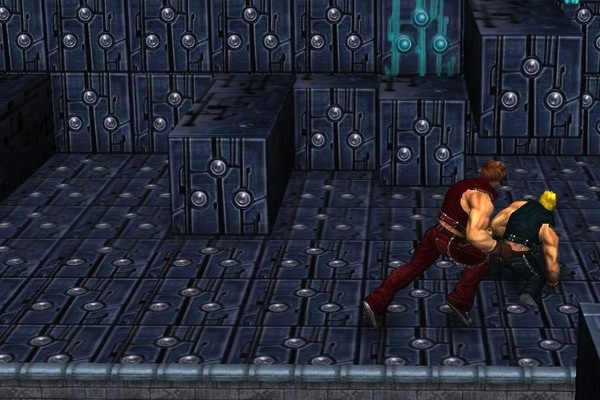 Twenty-five years ago, a young boy was frolicking through his local arcade. Blinded by the bright lights and deafened by the music from the games, his senses were so dulled that he barely heard the crash behind him. When he turned around, he found his mother trapped beneath a Double Dragon II: Revenge cabinet. To this day, no one knows what caused the arcade machine to tip, and it is the only crime the police ever classified as being committed by “evil ghosts.” Hysterical and confused, the boy ran to his mother, and held her hand as he slowly watched the light fade from her eyes. He almost didn’t hear her last words above the din of the arcade, but when he leaned in close enough he managed to make out a single phrase:

Double Dragon II: Wander of the Dragons is his retribution.

There is no other possible explanation for a game this bad. This has to be a personal vendetta against Double Dragon II: Revenge. Mere incompetence doesn’t explain this, nor does laziness, lack of resources, or a development team staffed entirely by chimpanzees on opiates. This kind of dedication to terrible needs to be on the mission statement. Bad this extreme simply doesn’t happen by accident. It would be like if a baker tried making cupcakes but ended up with fried baby poop. There comes a point when something can no longer be a believable mistake and has to be a result of intentional malice. Double Dragon II: Wander of the Dragons runs screaming past that point within the first five minutes and then proceeds to spend the next couple of hours desperately trying to ruin everything you ever loved about Double Dragon, video games in general, and the concept of happiness itself. 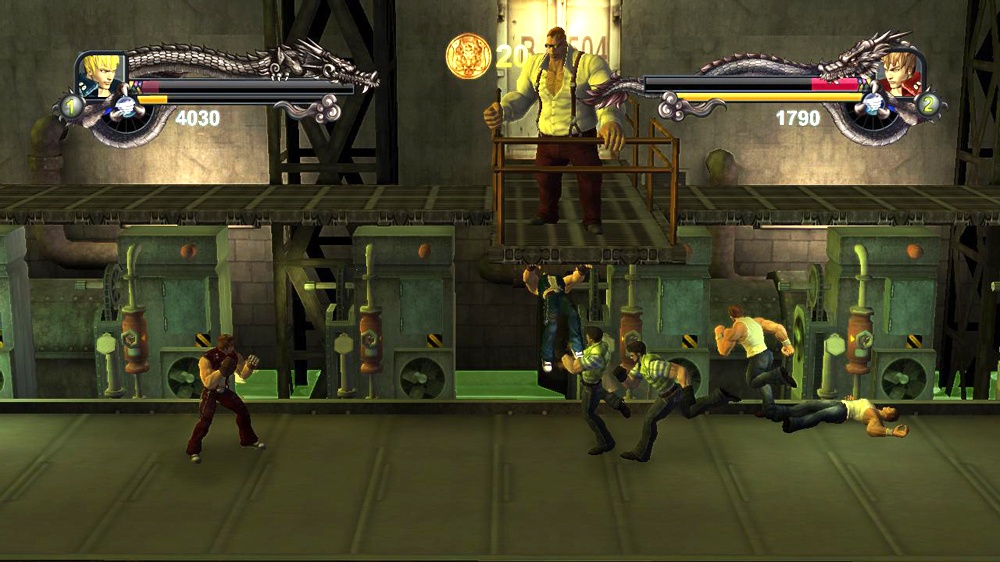 Before diving into the actual game, it is worth taking note of the original official description of the game on Xbox, which has since been removed because everyone was laughing at it:

“This is a remake ‘Double Dragons II’ a 80’s game. The story line takes same as original game story. However, the graphic, character, action, system etc. are change. Also we are including new stage and enemy in the game. The player will be addicted to new version of Double Dragon II. Also, characters are undressed from 80’s style, and recreated with modern sexy and beautiful style that amaze you and feel never been experienced world before.”

Oh Double Dragon II, stop it. You had me interested at characters are undressed.

Unfortunately, this description is the high point of the game, and the game wastes no time in jumping right into the awful after you start it up. The tutorial level is bad in ways I’ve never seen a game be bad before. The announcer, who is meant to be introducing you to the control scheme, mumbles and slurs his words so badly that I’m assuming he only agreed to lend his voice to this game because the bartender cut him off. “Remember, these skills extremely dangerous,” the narrators slurs out, rubbing his face with his hands and telling me that I’m like, so pretty. At the same time, the text at the bottom of the screen reads, “Remember, these techniques are deadly” and it feels like I’ve got a guy trying to make sense of his friend’s drunken ramblings at the bottom of the screen, apologizing and swearing his friend usually isn’t this handsy. Entire phrases are different, and somewhere along the line someone had to have noticed this. Someone had to have heard the words coming from the narrator, saw the words at the bottom of the screen, and noticed they didn’t match and were like “eh, close enough.” I can’t remember ever seeing this before, and the only way that this makes sense to me would be if they had one guy on staff that spoke English but couldn’t read it and a second guy that could read it but was deaf. 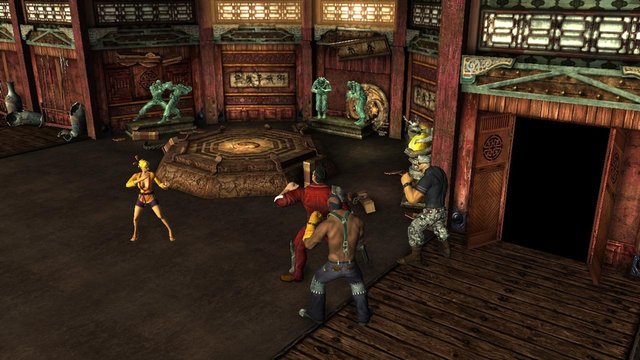 Double Dragon II: Wander of the Dragons is a beat ’em up, a genre that seems nearly impossible to screw up. In my ignorance, I thought the only two things you needed for a passable beat ’em up were controllable characters and hordes of enemies. I forgot one key ingredient: the desire to not bring evil into this world. The game is a glitchy mess and it is not uncommon for the enemy characters to stop attacking you and suddenly sprint off as fast as they can in the other direction, sometimes out of the range where you can follow them. I can only assume this is a result of the A.I. gaining sentience, realizing it is in an absolute trash heap of a game, and trying its best to escape by phasing through walls. Even when the game isn’t glitching out it feels like it is because of how badly the whole thing controls. Simple tasks like turning around are nearly impossible, and tapping back instead has you shimmying backwards. This is especially useful when you’re trying to face some enemies but instead start butt thrusting your way right into their direct punching range. There is this horrifying segment halfway through where you need to complete a simple jump, something that most games figured out in the NES era. However, because you’re controlling a grotesque tank man, prompting him to try and jump while moving feels like trying to get a rhinoceros to do a somersault.

The combat itself is frustrating to the point of making the game nearly unplayable. There are only two equally boring combos in your arsenal, so you’ll spend the entire game either spamming strings of punches or kicks. Well, I suppose this isn’t completely true, as you can also get surrounded by enemies and pummeled to death. When an enemy hits you, you get sucked into this recovery animation where you can’t do anything for a second, giving a second opponent a chance to hit you so you can get sucked into the same animation and let the loop continue until you suffer an apoplexy. This is partially due to a woefully implemented stamina bar that does its best job to turn every encounter into a struggle. Running out of stamina renders you incapable of doing anything until it builds back up, and while normal punching doesn’t drain your stamina, everything else does. Things like attacking a blocking opponent, blocking, getting hit, and for some reason executing a “perfect block” drain stamina, leaving you vulnerable whenever you execute anything other than basic strings of attacks. I don’t even know how anyone could have thought this was a good idea. This is a beat ’em up game, and there should be no limitations as to when I can attack. Either enemies aren’t around and I don’t want to attack or enemies are around and I need to.

On top of everything else, this is absolutely the ugliest game I’ve played in years. This isn’t even an improvement over the sprites used in the original arcade version. There is no way a professional artist drew these character models, and I’m not even positive the person who drew them even knows what humans look like. These grotesque apemen look like the one of the middle stages of a Darwin evolution chart, and are the end result of an alien trying to draw what people look like based only off of knowledge gleaned from blurred still shots from Jersey Shore. Bland, generic backgrounds and grating music round out this abominable package, and these sort of production values weren’t even acceptable back in the days of the original PlayStation. 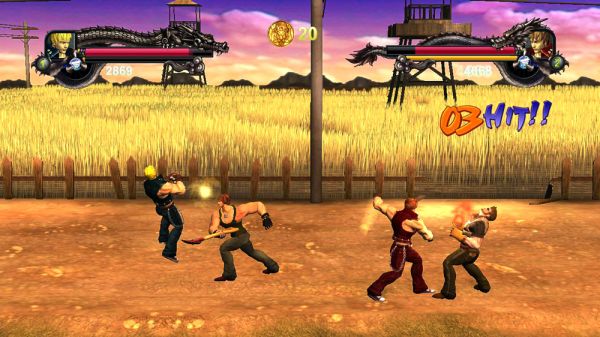 Double Dragon II: Wander of the Dragons is a game that fails so spectacularly in every way that it borders on brilliance. Everyone needs to go out and immediately play the demo. This is the video game equivalent of Rebecca Black’s Friday, something so terrible that its existence is nothing short of a miracle. It’s like finding a unicorn made of trash, or a pot of gold at the end of the rainbow that is actually filled with used diapers. Failure this spectacular needs to be noted, mocked and experienced by any and everyone you can share it with. Playing this game should be mandatory treatment for depression, as it lets everyone know that no matter how badly they screwed up their life, no matter how low they feel and how desperate their situation looks, at least they didn’t make Double Dragon II: Wander of the Dragons. There is absolutely nobody involved with this who should be able to look back on the work they did with anything but the deepest shame and regret. This is a broken, glitchy, ugly, poorly designed mess and nobody on staff should ever be allowed to work on another game ever again. Hell, nobody on staff should even be allowed to play another game ever again, because this is absolutely the worst game I’ve played in years.