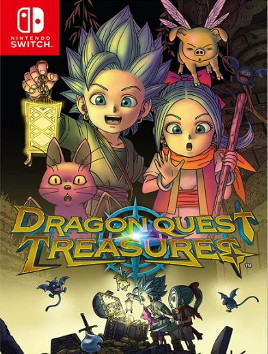 Dragon Quest is one of the most enduring franchises in gaming history. In addition to the eleven mainline titles that span several console generations, there have been numerous spinoffs that take the slimes out of the traditional turn-based JRPG format. For the most part these have proven that the Dragon Questuniverse can deliver a worthy gaming experience in just about any format. Whether it be centered on battles against hundreds of monsters, constructing a town or simply amassing a collection of monsters, Dragon Quest lends itself well to a variety of game styles. Dragon Quest Treasures is the latest venture into new territory in an action RPG that is about treasure hunting. And making many monster friends.

Dragon Quest Treasures takes place before the events of Dragon Quest XI. A much younger Erik and his sister Mia are aboard a Viking ship. As children are prone to do they sneak out of their beds to explore the ship after hours and encounter unusual animals trapped on deck, including a flying pig named Porcus and a flying cat named Purrsula. Freeing the trapped animals creates enough of a commotion to draw the attention of the adults below deck, leading to a daring escape from the ship, sending the young treasure hunters to a more suitable location for their own personal plundering. Things seem simple enough, but it doesn’t take much time at the new hideout before a quest greater than simple treasure hunting is uncovered.

Erik and Mia end up at their own island which players can name. This central hub functions as a base of operations and serves common functions of towns in RPGs. Here the player is able to review the monsters they’ve scouted, manage their party, explore the greater mysteries of the island and most importantly display their acquired treasure in the vault. When Erik and Mia first arrive their safe haven is in need of a lot of work, but with help from some friendly monsters, it ends up becoming a grand place to call home before too long. This setup works well in making resource management convenient without relying breaking immersion too much. As the gang reputation increases, more plinths appear for the player to show off their most-prized treasures in a display room. The scouted monsters are recruited through a receptionist’s desk while another monster can be talked to when selecting party members or sending out teams of monsters to scout for treasures. The shops are handled through menus which is disappointing since it would have been nice to walk into those establishments. As the story advances more secrets and hidden areas to explore become accessible. 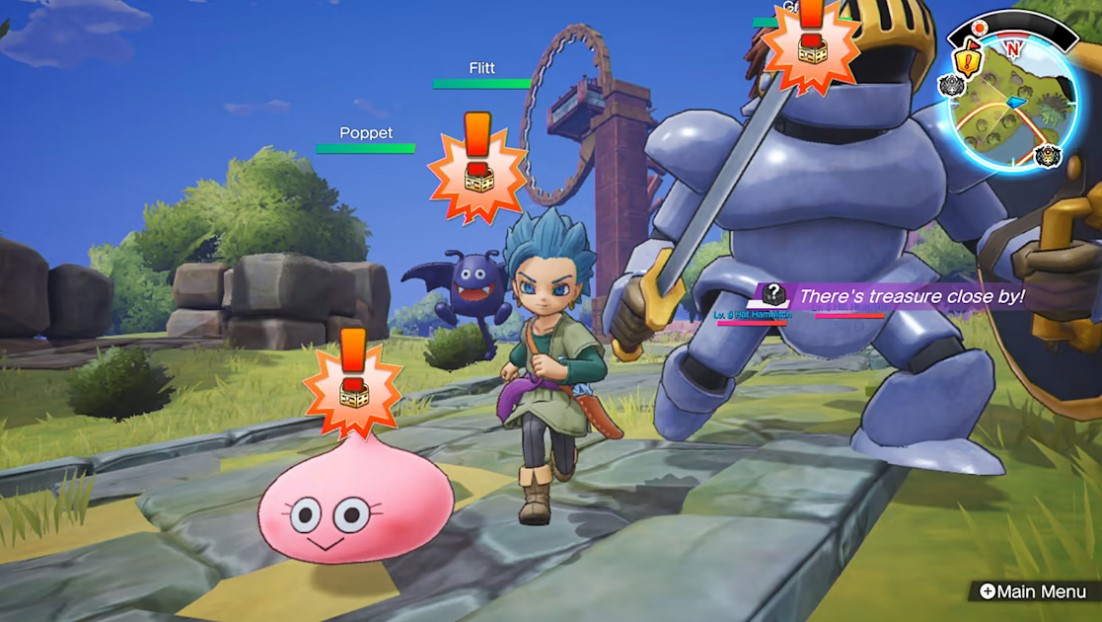 Treasure hunting might be the primary objective of the two siblings, but these children don’t exactly qualify as formidable warriors, let alone the fact their small frames aren’t built to haul around massive amounts of treasure. Monster hunting is a huge part of being successful in Dragon Quest Treasures and this is part what makes it so gooreat. When the player is out exploring, there’s a chance that a defeated monster will be scouted, which means they will be waiting at the reception desk to be recruited. Getting a monster to join the party requires a certain amout of specific items which is probably done to mitigate people from getting monsters 30 levels higher than them. Players can have up to three monsters in their party at once. Each monster offers a different ability called a forte so party composition does matter. Players can glide on the wings of a Dracky or use a Slime to boing to places too high to otherwise reach from jumping. Walking can get tedious, but a Sabercat can be a steed to get Erik or Mia where they are headed post haste. Collecting all the different types of monsters and figuring out their abilities is one of the biggest factors in the charm of Dragon Quest Treasures.

One the player has some good monster friends to carry their loot and fight their battles, it’s time to start treasure hunting. Treasure can be found virtually anywhere on the surrounding islands. When players get near treasure there will be an exclamation and a device can be used to help narrow down its location, where they can zoom in on their current party members’ view of where it is. Once the treasure is dug up one of the monsters will carry it until it is returned to base, though if a monster is defeated or takes too much damage they can drop the treasure. Once the treasure is returned and appraised, players can display a few of their favorite items. For long time Dragon Quest fans revealing the acquired treasure can be a great moment. Without going into too much detail to spoil the surprise, the treasure collection is largely references to previous Dragon Quest games. One of the first treasures discovered in this review was a humorous reference to Dragon Quest IV, a title with many fond memories of playing on the NES attached to it. Other players’ nostalgia mileage may vary. 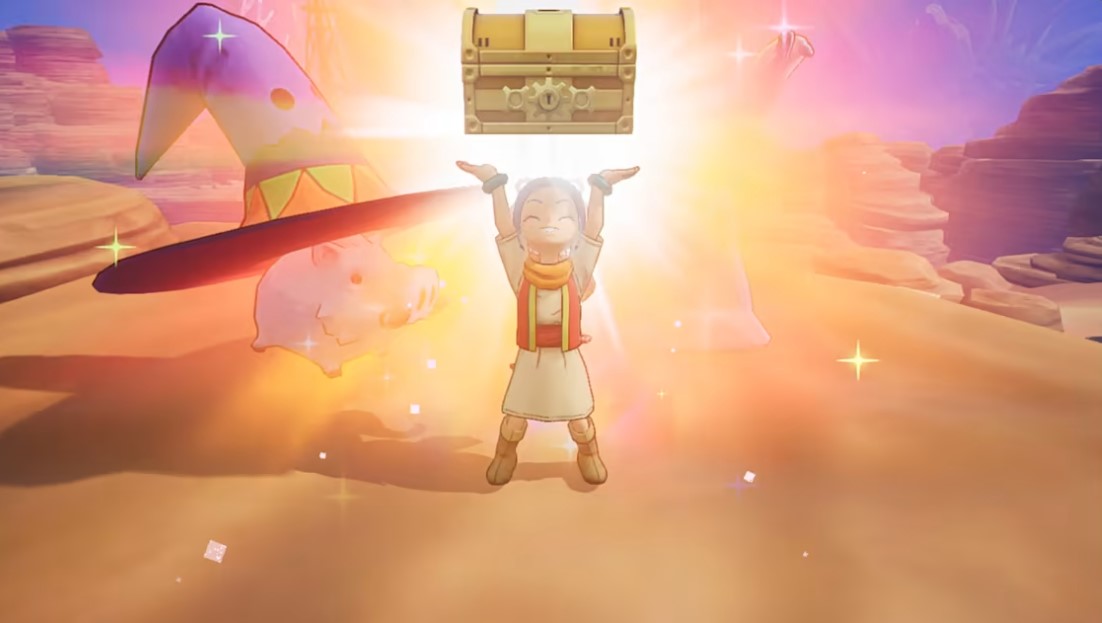 Battles in Dragon Quest Treasures can be as involved as much or as little as desired. If a team of powerful monsters is assembled they can take care of most of the heavy lifting if players wish to focus more on exploring or treasure hunting. Should a more hands-on approach be desired, Erik and Mia have plenty of options at their disposal. They each possess a magic knife that works just fine for melee combat. For the players that prefer ranged attacks or more versatility, they’re armed with a personal catapult. These items can hurl an assortment of projectiles, ranging from simple pebbles to more explosive items. There are many items available that have special effects or have been imbued with the common spells of Dragon Quest. Some enemies might be too dangerous to overcome with brute strength, but a stun bullet can make them more docile.

When players take the train from the base to venture out into the world they can go pretty much wherever they want. Either Erik or Mia can be controlled, and it doesn’t matter which as they share equipment and experience levels, and up to three monsters. There is guidance and quest markers, directing players to the current object whether it be looking for a specific treasure or getting a run-down train station up and running. Players are free, however, and even encouraged to explore the world in whatever manner they see fit. There are soft restrictions in most areas, so there realistically isn’t complete freedom. You can travel whereever is desired, but many areas are heavily populated by enemies much too powerful to survive an encounter at the current state. In addition to the regular monsters roaming around, once Erik and Mia’s treasure hunting gang reaches a certain level of notoriety rival gangs will come after their treasure. Staying in an area for too long with too much treasure will attract the attention of a gang trying to steal the hard-found treasure, so it’s best to defeat them before they run off with it. The base isn’t completely safe either as these nefarious gangs have the audacity to attack them on their home turf and try to steal their displayed treasure. Warding them off can increase the value of the targeted treasure, but there are many items that would be upsetting if they were taken. 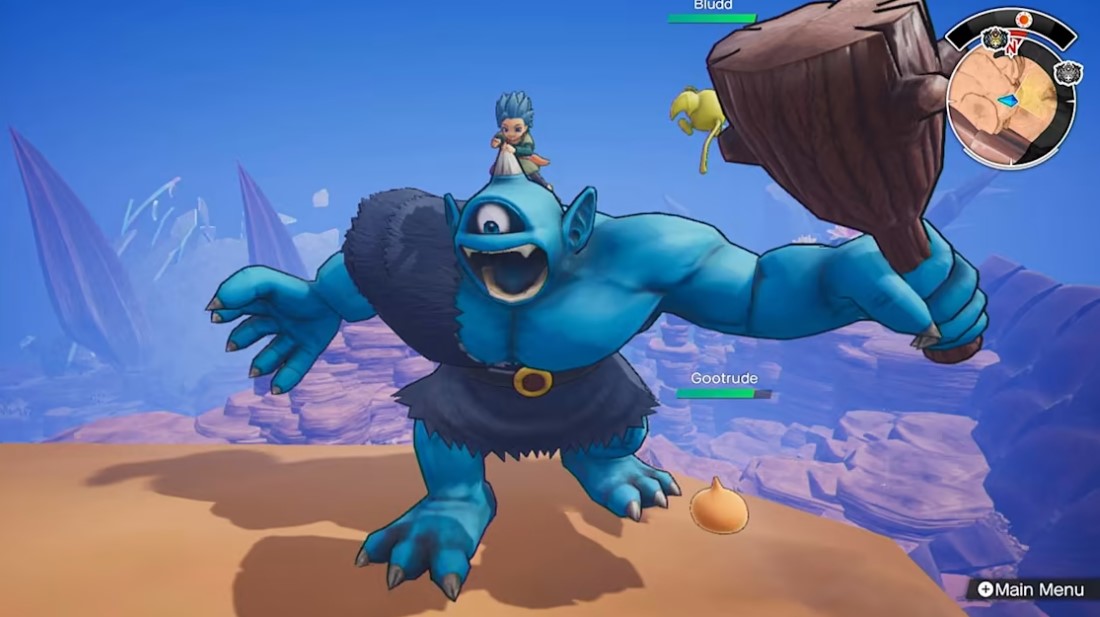 Dragon Quest Treasures is a spin off of Dragon Quest XI, but it’s a treasure trove of callbacks and fan service to all the entries that came before it. The soundtrack is curated from different pieces throughout the franchise history. Many of the treasures that end up in the vault are specific references to previous games. And best of all it wouldn’t be a proper Dragon Quest title without a gooratuitous amount of puns, many of them pertaining to slimes. As much as these elements may bring a smile to fans of the franchise, a game’s worth cannot be based on references alone. In this particular case these are just icing on the cake as Dragon Quest Treasures is one of the most fun games released this year. Whether trying to catch a certain type of monster or complete one of the daily bulletin board quests, there’s plenty to do on the various islands. The game offers just enough guidance where players always knows where they should be going, but also gives enough freedom where the main objectives can be left on the backburner for some time without consequence. The way in which the story gradually unravels only contributes to the addictive nature, trying to uncover just enough to raise the gang level so the next mystery of the main story can be unraveled. During this review period sleep was lost on more than one night because the treasure hunt had to continue. This may very well be the best Dragon Quest spin off game to date.

In regards to art direction and sound, those familiar with this series know exactly what to expect. Dragon Quest has always had its own distinct art and music style. Games of this nature generally include memorable pieces of music from previous games alongside familiar monsters. There are no surprises on either front and that’s likely good news to the fans. Dragon Quest Treasures is a single player adventure, but there’s online functionality where players can interact with each other’s islands. Once they reach a certain level a repurposed killing machine appears at the station and opens the opportunity to go seek treasure in other players’ worlds. It’s not the same as traditional multiplayer, but it is a way for friends to show off their treasure vaults. 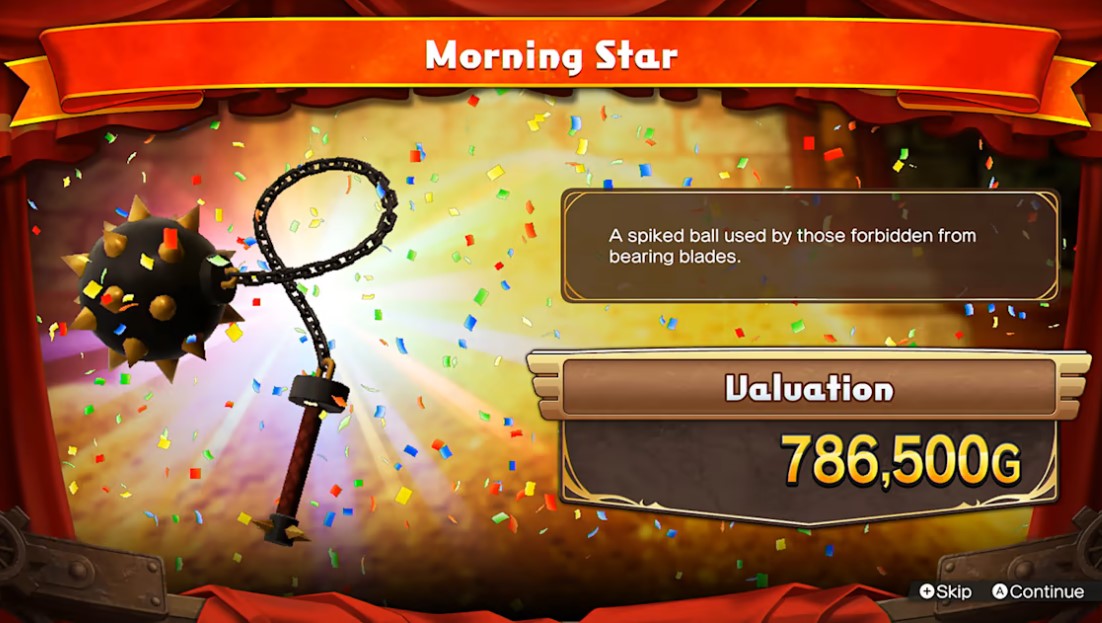 Dragon Quest Treasures offers a glimpse into the early years of two intriguing Dragon Quest XI characters. The world of floating islands is a wonderful setting for open-ended adventure, where hunting for treasure and monsters can become equally addictive pursuits. The numerous callbacks to other Dragon Quest titles are sure to bring a smile to longtime fans, whether it be familiar pieces of music or the fan service treasure items. This is not only a brand new adventure, but a love letter to the franchise. Dragon Quest Treasures is enjoyable from the start and only becomes better as the story gradually unfolds and players gain access to new areas and monstrous companions.