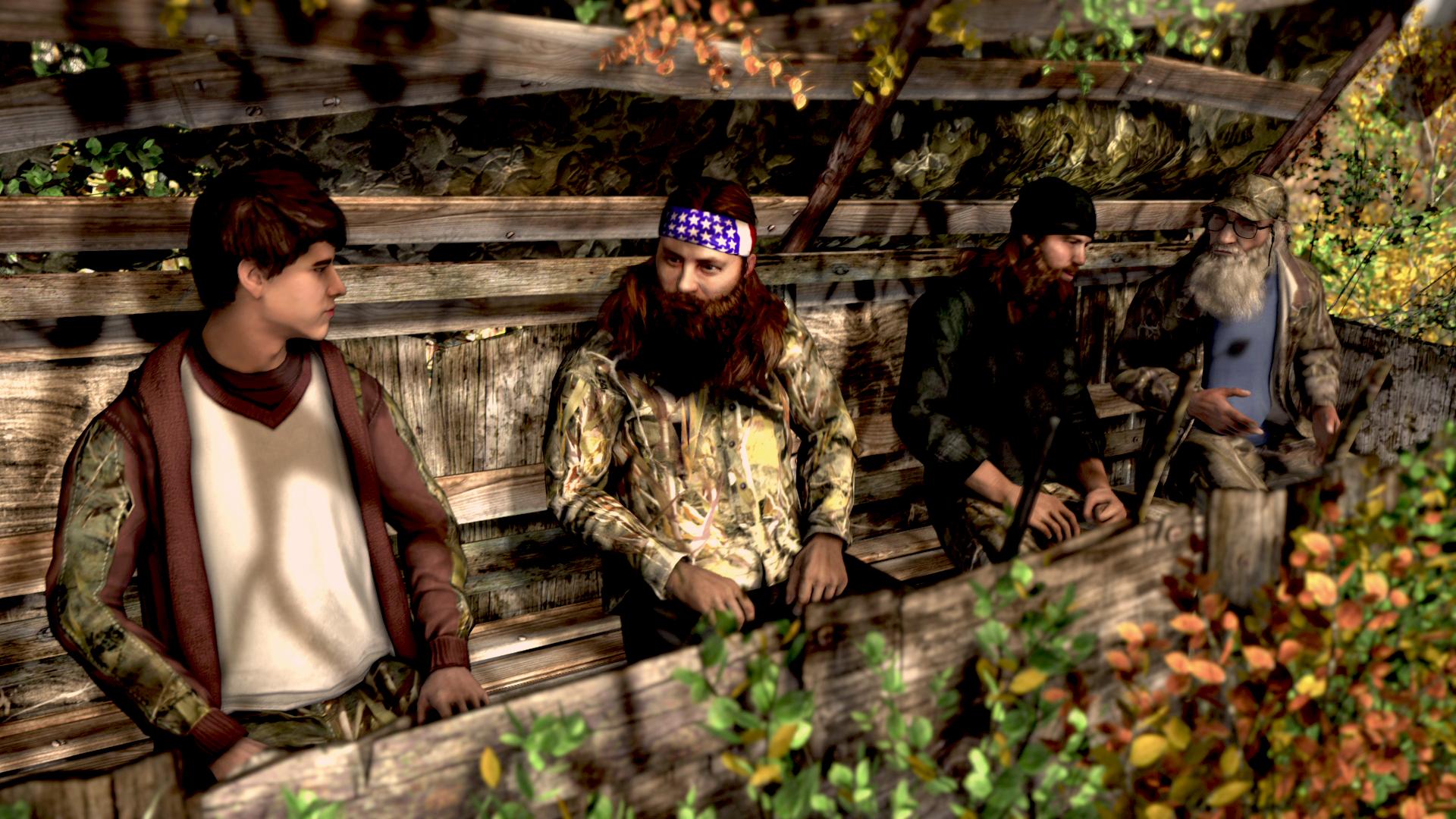 Remember when EA Access was announced and we ran down what could happen if other publishers did something similar? While some held up to this kind of pay model, Activision’s lineup didn’t — and Duck Dynasty: The Game doesn’t change that. A&E’s smash hit is now available in game form on practically every console including Xbox One and PS4, and after playing it, you’ll be left wondering why. The commercial need for it seems odd since there’s plenty of stuff out there to buy with the show’s namesake on it, and the game is just a far more expensive way to do that — and it lacks the usefulness of Duck Dynasty duck tape or the medical benefits of a Duck Dynasty bandage. You may need a Duck Dynasty arthritis kit after all the shooting and duck-calling you’ll be doing. There are also driving, boating, and walking portions to the game as well.

The bulk of your time spent with the game will be in the story mode, where you’ll partake in all of  these experiences.  It plays out like an episode of the hit A&E reality show, which you’ll be reminded of on both the title screen and in the options menu thanks to a helpful tip to buy the season five DVD. As the young John Luke, you’ll be a voiceless protagonist effectively acting as a fly on the wall as the Robertson clan chats amongst themselves. There’s an attempt at banter, which is reasonably impressive for a scripted game, but none of it really works. It’s at least better than the non-verbal stuff like bathroom humor to elicit a reaction though. That rarely works in a game, and it absolutely fails here. The plot is a bunch of nothing, but the various activities are fun to a wide variety of degrees. 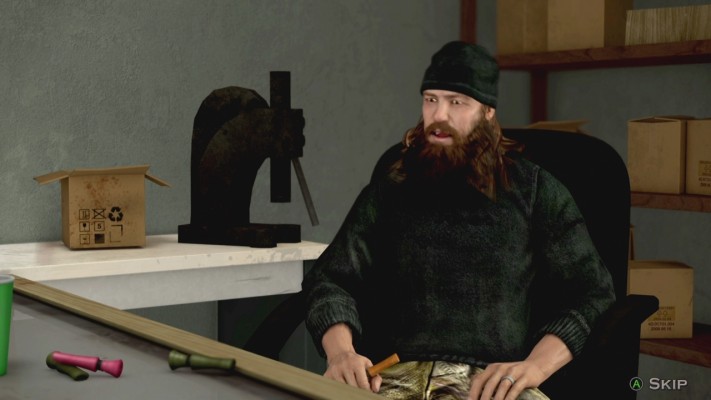 Duck calling is a routine rhythm game that might sound a bit odd for the concept, but it works in practice. Since duck calls play with timing, a certain button must be pressed alongside a clock arm movement to succeed. The better you do, the more ducks you’ll have come to you, and then you can either have someone else shoot them or shoot them yourselves. Shooting is mostly bog-standard, but has some wrinkles to it. Everything can be manually moved if you want to add some challenge, or if you want an easier experience, just weave in and out by not always pressing LT and your shots will home in. They won’t be 100% homing shots, but you’ll have a fair easier time as the default reticule goes over the basic area you need to hit. This is a great way to allow for accurate shooting, but also make things easier for more casual players. Time-wasters like sign-watching for bonus content and metal detecting, also for extra stuff, are included.

There are also some on-foot sections that basically just take you from your shooting area to a vehicle of choice. Both the truck and the boat control just fine, although the air boat used for races is way too loose. I’m sure that’s fairly realistic since it’s such a small structure powered by a large fan, but it’s unwieldy and makes the races needlessly difficult. The “open world” sections where you travel via GPS from point A to B feel like filler, and a lot of times, are. At one point fairly early on in the game, around the 15% mark of the story, there’s a section where you need to go from a dock to the truck, and then to the house. The former action takes a few seconds, but could easily just be made into a cutscene since it’s so short. Then the world itself is simply far too similar to feel realistic in the slightest. 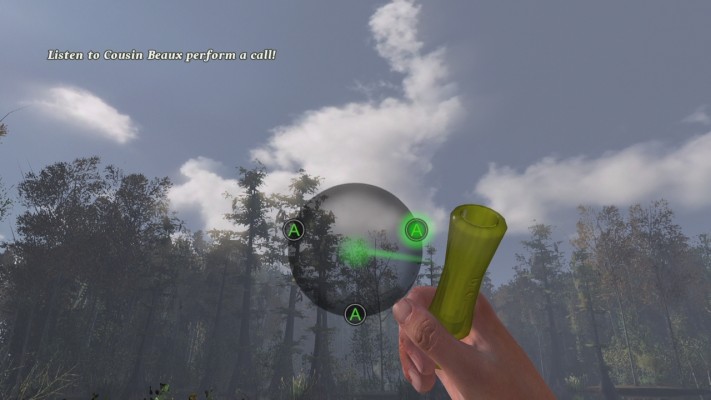 This issue is compounded when it comes to just about everything involving the graphics. Environmental textures change color frequently, resulting in a slightly disorienting experience. Thanks to the GPS and closed-off areas, you’ll never get lost — but it’s distracting and unsightly. Character models vary between okay with the clothing and absolutely terrifying. Long-haired characters look hilariously bad due to clipping issues and the hair just looking bad on the head and in the beards as well. Of course, for a game with almost nothing but long-haired, bearded characters outside of your character, that’s really bad. What’s worse is your character appears to have his head detached from the rest of his body. Animations aren’t all that good for the characters, and vehicle movement is a bit jarring as well. With the boat, there’s a weird texture break between the boat and the water that further takes you out of the in-game world.

Duck Dynasty‘s music is a mix of things taken from the show and other stuff. There’s a lot of country-sounding music with a bit of metal mixed in. Absolutely none of it was pleasing to me, and I’ve got fairly diverse musical tastes. The Duck Dynasty cast does some work in the game, but it’s quite clear that they’re better at delivering unscripted dialogue than scripted stuff because their delivery is wooden. Perhaps that’s fitting given how many trees, of various colors, you’ll be seeing. The duck calls sound distinct as do the animal noises, so the game does at least accomplish its goal. 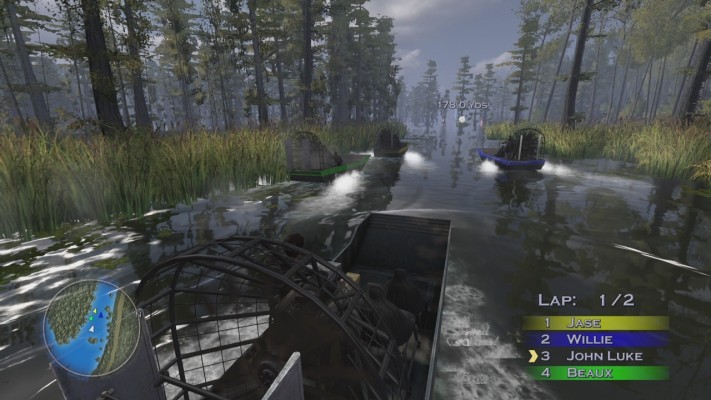 This is no Duck Dynasty Warriors, but we absolutely, positively need that at some point. Duck Dynasty: The Game is available for every modern-day platform known to man beyond the OUYA, Vita and Wii U, and can be safely skipped on all of them. Beyond the reasonably well-done shooting mechanics, there’s no real depth to any of the gameplay elements offered up here. You get a hollow racing game, a hollow shooter and an overly-simplistic rhythm game. Anyone out for a modern-day Duck Hunt given the whole duck-shooting concept might want to try it out as a curiosity, but not until it gets a 95% price drop. This is a bad licensed game the likes of which we haven’t seen in quite a while, but it isn’t so bad that it’s legendary. There will be no Game Chasers episodes devoted to finding it in 2025, just people regretting their purchase like so many children of the ’90s clinging to bin after bin of Beanie Babies in the vain hope that they’ll increase in value one day.