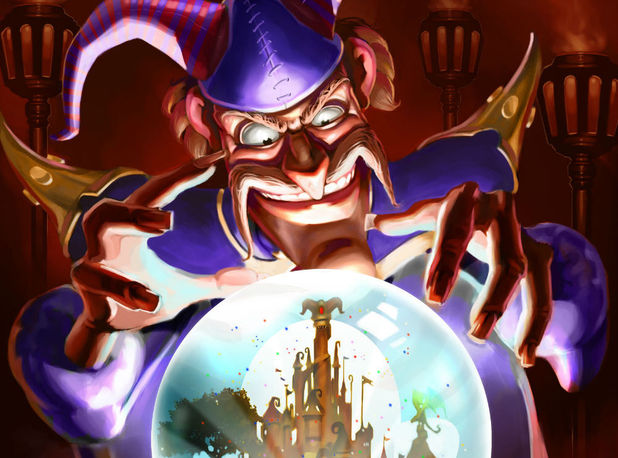 From Critical Studios and Paradox Interactive comes Dungeonland, a rather humble little dungeon-crawler in the vein of Gauntlet, or something else where players hack up gobs of baddies in exchange for succulent amounts of loot and treasure. Filled to the brim with mindless fun, death-dealing encounters and a shedload of zaniness, this hack and slash, RPG-lite extravaganza has a little bit of everything, except a meaningful single-player experience. For $9.99, though, do the pros outweigh the cons?

Let’s have a look-see. At first glance, one might assume Dungeonland is a somewhat shallow game that lacks any type of substantial depth. Actually, that assumption would be fairly accurate. Despite being part of a genre that is known for its intricate and deep gameplay filled with loads and loads of stat points, min-maxing and pouring over item screens to see which weapon best suits a character’s role, Dungeonland doesn’t ever concern itself with being overly complex. In truth, that’s why the game works so well. Although this is a dungeon crawler by all definitions, it’s not your average RPG. It forgoes profundity to focus on sheer enjoyment, and succeeds wildly at it. This is mostly due to how the game is setup.

Dungeonland tasks players with traversing giant labyrinths, all of which are part of a much larger medieval theme park. In said amusement park, there are various areas players must tackle. Each of the stages that are offered, have their own specific theme — usually something rather absurd, such as Arcane Kingdom, which is described in-game as “an area that captures the enchantment of fairy tales with exciting murder, exploding frogs, extraplanar monsters and so much more.” In each stage, there are area-specific monsters and bosses, all of which are not afraid to hand you your ass without so much as a second thought. Thus, make no mistake, this is a hard game, and you will die. It’s so challenging that an “easy” or “normal” mode doesn’t even exist; the first difficulty level you can choose is simply entitled, “hard” and then moves to “harder” and finally “impossible”. That’s right, this game was designed to test one’s will to persevere, and to test the durability of household keyboards, seeing as players will most certainly slam theirs fist down on them several times in response to the take-no-prisoners level of challenge. 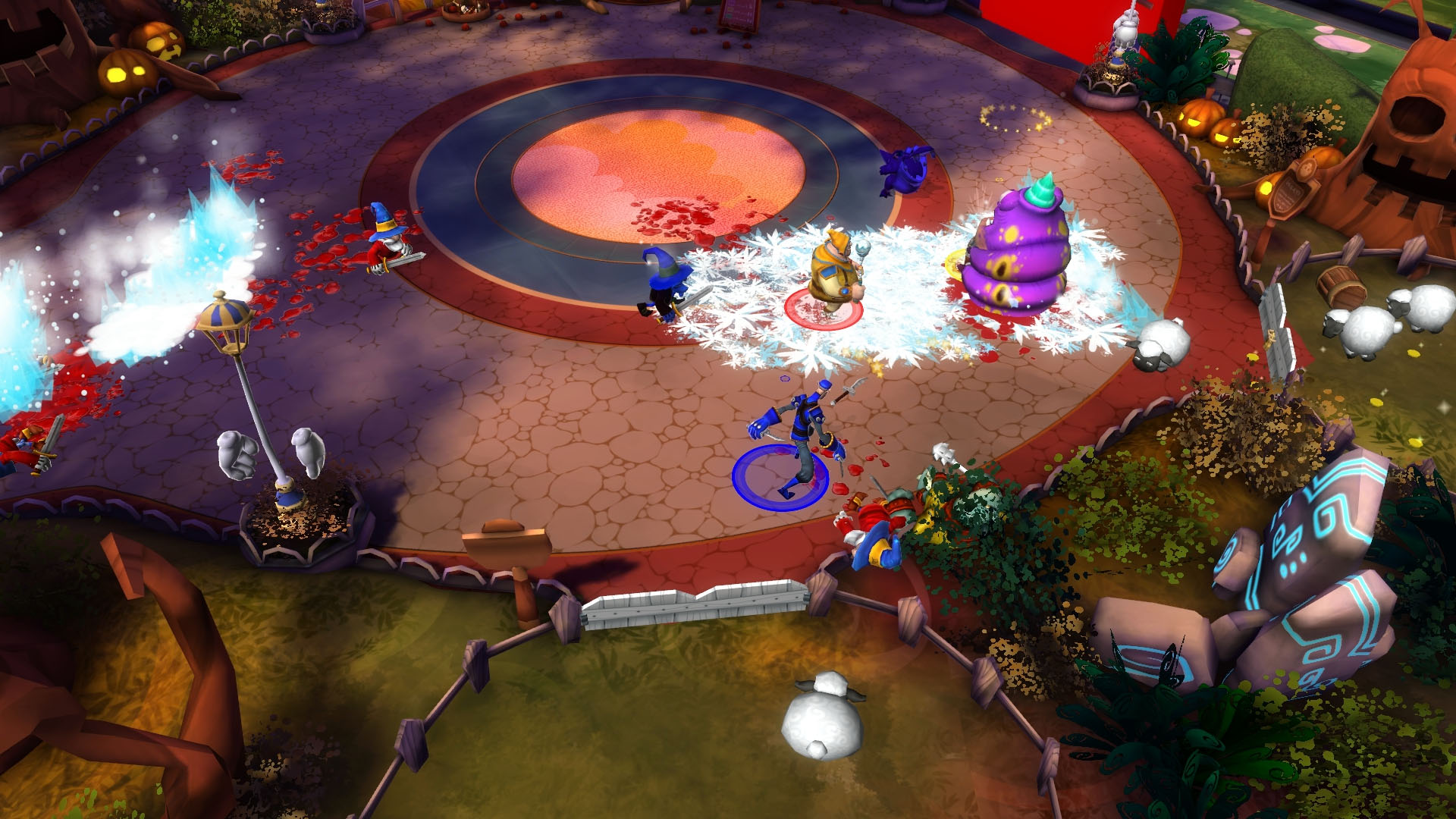 Thankfully, those greiving need not be alone in their suffering since Dungeonland is a game best experienced by, and clearly designed for, being in the company of fellow human players. Teaming together and going at the wily dungeons not only makes the tasks a smidge easier, but exponentially more enjoyable, especially with four people. Objectives will require the help of one’s fellow compatriots, and there’s nothing more satisfying than banding together to share a moment of sweet, sweet, hard-earned victory as a single unit – a real “one for all and all for one” moment, indeed. Combos will be made in conjunction with fellow warriors throughout the dungeon spelunking, making the taste of glory go down all the easier with friends in tow. In truth, Dungeonland is at its best when there are multiple players involved. This presents a problem, however, considering that single-player feels like a total throwaway experience. Fortunately, the online component is without noticeable blemishes, so if you don’t have any friends at the ready, there’s a world of angry teenagers and trolls just waiting to play alongside you.

That being said, when firing up Dungeonland for the first time, one might be immediately stricken with a sense that the game is a bit light on features. But this is the type of game that opens up the more time players spend with it. For example, at the start of the adventure, there are only three character types to choose from; however, over time, as players lay waste to minions and collect the coins they drop, they can then spend the acquired currency to unlock new sub-classes. Even outside of these character jobs, there are new items, weapons, armor and the like to unlock and equip as well, making this the type of experience that encourages replaying stages over and over to get the most out of it.

To replay stages, though, really just means players will be thrust into hours upon hours of combat. The battling in Dungeonland epitomizes the word, “rudimentary”, with the game only divvying out a handful of attacks per person. Because of this, the combat isn’t all that profound, and without fail, players will find themselves mashing the same keys without much change-up. Regardless, this simplistic design generally fits the feel of the game, which is all about providing a sort of Mario Party-inspired experience that never limits one’s fun by implementing gratuitously involved mechanics or character options. No less, it can grow a bit mundane over time, simply because there’s not a lot of variety. But the aforementioned joining up of buddies for the sake of friendly mockery and the slaughtering of everything in sight, remedies this flaw quickly. 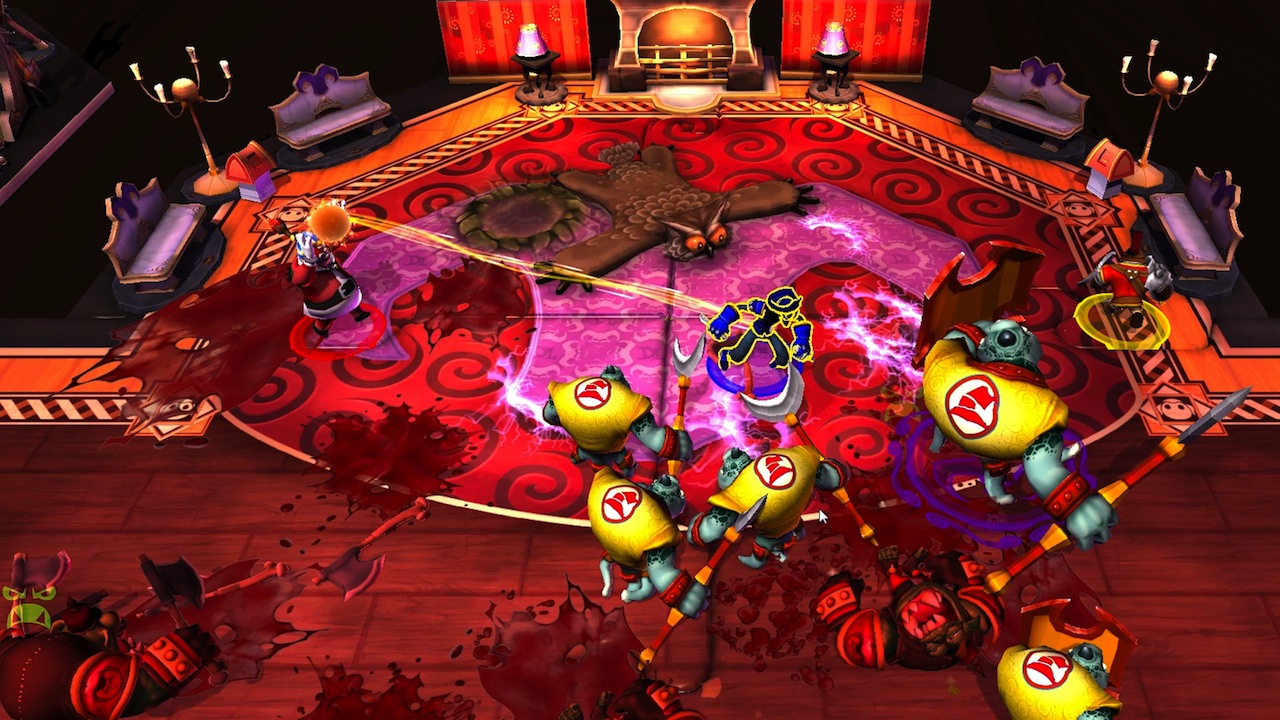 Dungeonland isn’t just about killing all the things with friends; it’s also about pitting minions against them to make their life as miserable as possible in its spectacular dungeon master-esque mode entitled, Dungeon Maestro. How appropriate of a title, I might add. Here, players play the lord of the dungeon and essentially set up all the adventure’s scenarios, monsters, items, and whatnot to thwart the heroes’ advance. By oneself, this isn’t all that exciting, however, like everything else the game offers, in the company of friends it’s a riot. Playing dungeon master and purposefully dicking over buddies is more satisfying than I care to admit. In fact, the Dungeon Maestro mode may be worth the price of admission by itself – it’s that satisfying.

That aside, if players are looking for something outside of this senseless kind of gameplay, like a poignant narrative, they won’t find it here. The story in Dungeonland is barebones and as close to nonexistent, without being nonexistent, as humanly possible. So, don’t expect Pulitzer Prize stuff. Yet again, however, this is a game that is most concerned with giving folks a streamlined, jump in and out experience, and a story would only hold it back from being so accessible. For that reason alone, the lack of a narrative is, in this case, welcomed.

What’s rather unwelcomed is the game’s performance. Although the system requirements appear quite reasonable, and in fact are rather low, the game chugs and hiccups more than it should. On a top-of-the-line rig, I was experiencing strange framerate issues that I don’t at all with some of the most graphically-demanding games around. This is tragic too, considering this is a skill-oriented game in terms of the need for accuracy and landing blow-by-blow to damage enemies; there’s no sitting back, targeting, and hitting an ability that automatically finds its target. With the need to be precise in one’s assault, the framerate stuttering is frustrating and rather shocking. What’s most strange is the fact that all of this is happening, even though Dungeonland is hardly a graphical powerhouse. Actually, it’s not all that easy on eyes in general. Its aesthetics aren’t bad per se, but merely middle-of-the-road and without grand creativity. The same goes for the sound and overall presentation. 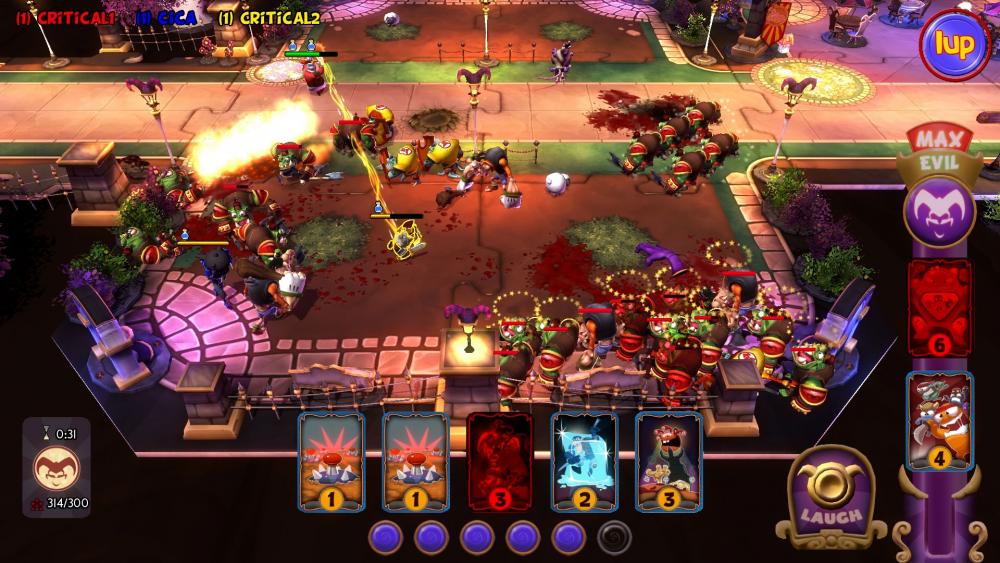 In the end, Dungeonland is light on content and features, but that’s okay because it’s an absolute steal for $9.99. Players will get a hell of a little dungeon crawler that can provide hours and hours of entertainment, so long as they have friends to partake in the silliness. The game’s tough as nails difficulty, genuinely fun and accessible gameplay, slew of unlockables, and Dungeon Maestro mode all make this worth the price of admission. There are some bugs and glitches along the way, so be aware of that. The ones I experienced weren’t game-breaking, but they were annoying all the same. With that aside, the only reason you shouldn’t pick up this game is if you have no friends or simply don’t like to have fun. If you are a curmudgeonly gamer who detests the idea of laughing and having a good time, then stay as far as possible away from Dungeonland. For everyone else that doesn’t fall into that category, be sure to plunk down the money — you won’t regret it.