As you can see, Dyad is a strange game – and yet it feels both familiar and foreign at the same time. Its emphasis on rythmic shooting reminds me a lot of Rez, while the graphics reminds me of the PSOne sleeper hit (also downloadable on PSN) N20, with Child of Eden’s overall sense of nearly-blinding brightness mixed in. Breaking it down as a game is tough, so I’ll try to sum up the experience as a whole.

It begins with you taking control of something I’m going to call a psychedelic jellyfish and learning to grip or hook enemies with it to propel yourself forward through a tunnel. You can move in any direction in this tunnel, also like N20, and as the journey continues, you’ll learn new skills that all build on one another. You’ll go from learning how to to hook your enemies, to then creating little rings around them that you need to dash through while carefully avoiding the center of the ring since that contains an enemy. At that point, hitting an enemy puts you further back, or in the case of a time trial, causes you to lose time. Later, you’ll learn to ‘lance’ or dash through enemies after grazing enough rings to build up your boost. Then you can attack enemies…but only with a full boost gauge. Having to do all of this while having to visually make sense of all the crazy things on-screen at once is a challenge, but never a chore. 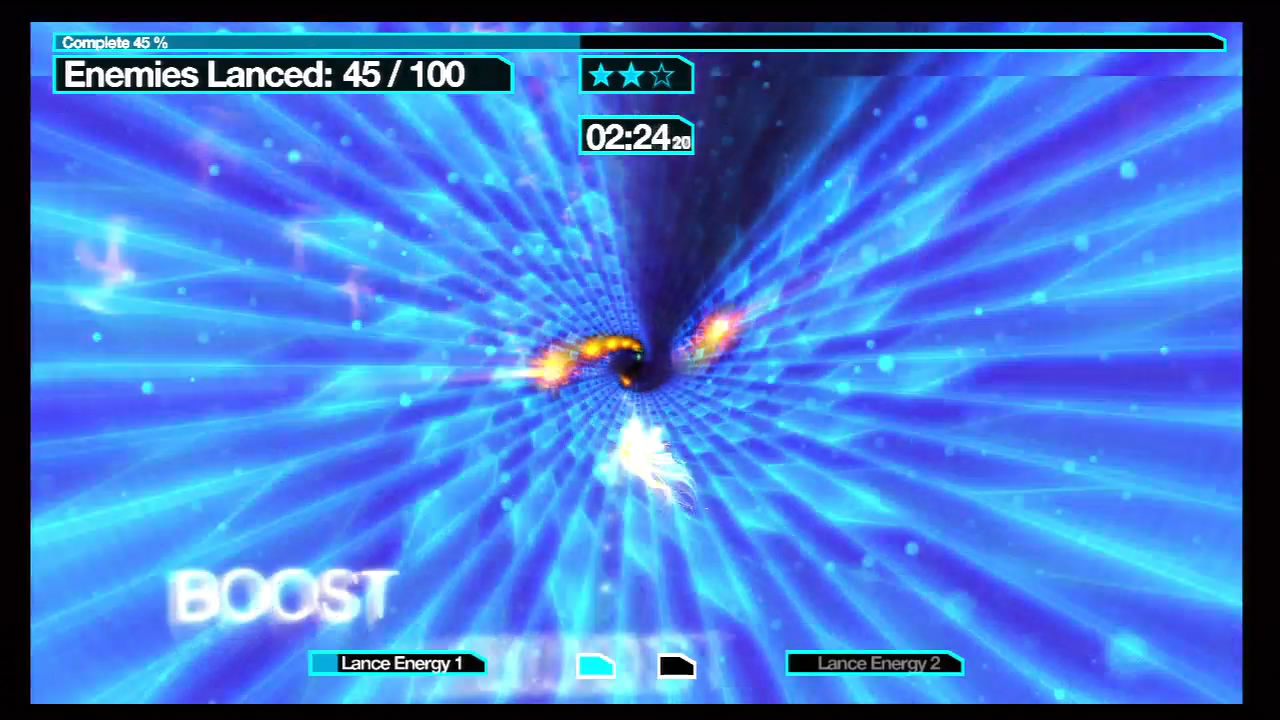 You’ll learn a lot of new techniques later on that all link together nicely.  The game eases you into every new mechanic and is fairly forgiving with the base levels. The remix levels allow you to customize your experience a bit by changing the instrumentation, washing out the colors, and definitely keep things interesting. The replayability is already high due to the scoring system, which lets you move on with one star, but when you get one, you’ll immediately want to retry that stage as many times as possible to get three instead. Thankfully, instead of trying to make up for an Olympic bronze medal, it won’t take you four years here – only a matter of seconds. Getting three stars not only feels great, but unlocks the trophy levels. These are easily the hardest parts of the game and force you to play efficiently. They’re also a lot of fun and nothing feels quite as crushing as only being a few seconds slower than the target time, or avoiding 22 enemies out of 25. You’ll fail many times while trying to reach a goal, but you’ll never be able to blame the controls. The left stick moves you around the tube nimbly and the button-related controls are responsive too.

Dyad’s crazy visuals are striking, but even with so much going on, they’re  really only distracting when you turn on the distortion filter in remixed stages. Normally, it’s like controlled chaos in that there’s a ton going on at once, but you’re able to make sense of it fairly quickly. Given the fast pace of everything, that’s a Godsend. The sheer amount of colors you’ll see will amaze you and make you glad it was created in the HDTV era. On a technical level, the smooth shifting of one super-intense set of colors to the next is impressive – as is the lack of slowdown. 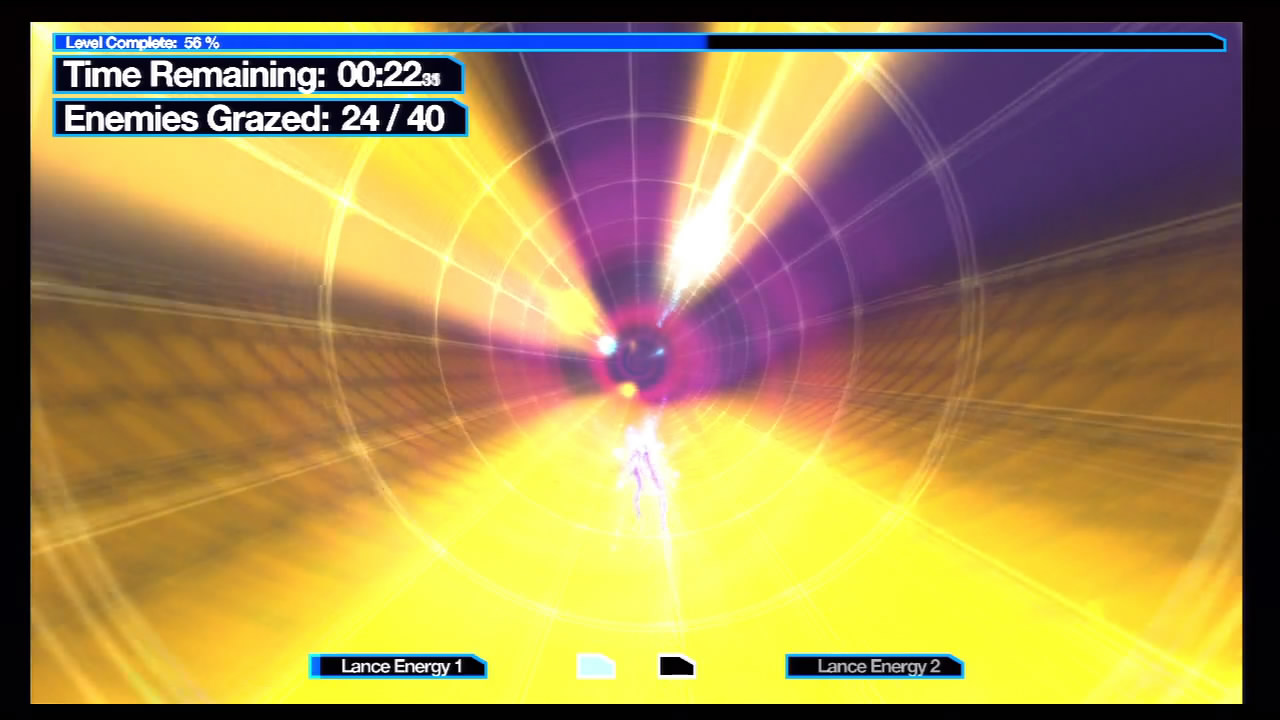 The dazzling graphics go hand-in-hand with the music, which plays a key part in the game as well. There’s a lot of variety to it, with some stages using techno, some having more melodic sound, and then some having an old theramin sound throughout them. It’s really enjoyable music to listen to, and it causes this to be one of those games I wish had its OST bundled with the game on PSN.

The sound effects are really good as well, and I love having different sound effects for either success or failure. Sometimes, you’ll hear a pleasant ding that reminds of the sound effect in Nights when you’d go through a ring, other times you’ll hear a more muted version of it – kind of like a dinner bell being rung with a towel over it to muffle the sound. The audio makes failing kind of fun too, as you’ll hear a scratched record effect that starts off at one volume, then intensifies if you make multiple mistakes in a row. The good thing about that is there’s also a tremendous game over equivalent screen with FAILED in sometimes super-bright text – just in case your lack of star accumulation didn’t serve as enough of a reminder that you fell short of your goal for that stage. 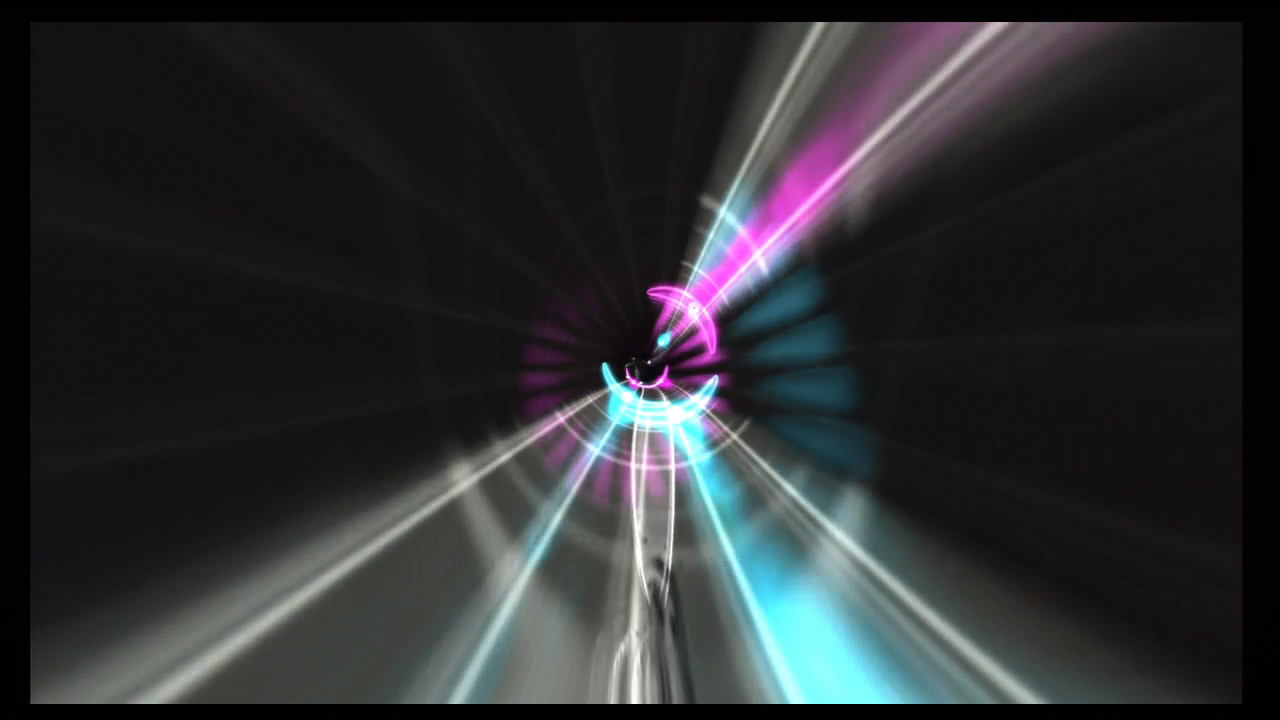 If this all sounds like something you’d like, then it’s definitely worth $10 – and if it still seems a bit too weird for you, then give the new, free demo a shot. All you’ve got to lose is hard drive space. As an experience, it’s one of the most unforgettable of the generation, and overall one of the best games on PSN. It reminds me a lot of Flower in the sense that there are a lot of intangible qualities that make the game something you need to experience, along some that you can put a finger on fairly easily. It’s a different kind of must-play experience than most games, but still easily worth your time and money.