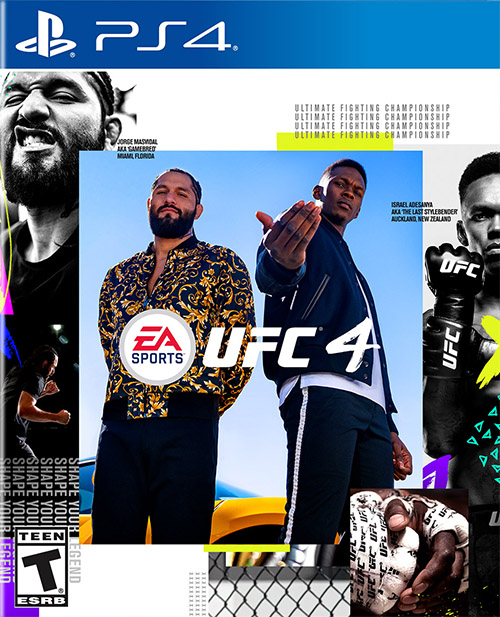 The fastest growing sport has had a surprisingly long history of video games. From the Crave Entertainment published Dreamcast game to Yuke’s developed Undisputed, each pushed the UFC even more into the mainstream. Now that Electronic Arts has the license, the publisher has surprisingly been taking their time with their releases. This isn’t like their standard annual franchises that we’ve become accustomed to; they have put the series into a biennial cycle and maybe it’s for the best as it allows the developers to properly develop and hone the various mechanics that desperately need reworking. The fourth entry into the franchise, EA Sports is hoping to evolve the franchise even further with a grappling system that’s a little more user friendly and some of the best visuals in a fighting game. With a huge roster of your favorite fighters, a newly-introduced Kumite mode and various adjustments to the core gameplay mechanics, has EA Sports delivered in creating the best, most realistic UFC experience possible or is this a quick cash grab on the license?

For the standup game, UFC 4 is incredibly fun. There’s a huge array of moves to pull off to the point it’s almost overly complicated. You’ll be using various multipliers across the top of your controller; for example, you have the simple hooks and overhands assigned to the L1 and R1 buttons respectively, but there are also attacks that require you to hold down on a combination of the four shoulder buttons. So in order to throw body hooks, you’ll need to hold down L1 and L2, or if you’re looking for flashier moves you can find them with R2 and L1. There’s a huge array of moves to perform where you’ll probably get a little overwhelmed and fall back to some of the simpler actions most of the time. There’s nothing like a good, swift roundhouse kick. Unfortunately, sometimes the buttons can be unresponsive to a frustrating degree. When you want to throw a Lead Overhand and it’s assigned to the same command as clinch (although it’s simply tapping the face button versus holding it), you’ll find yourself doing the wrong action over and over again. It’s not an overly frequent occurrence, but it happens more times than you’d hope. The stance system is also a baffling as it will consistently swap for no discernible reason, changing up your attacks. 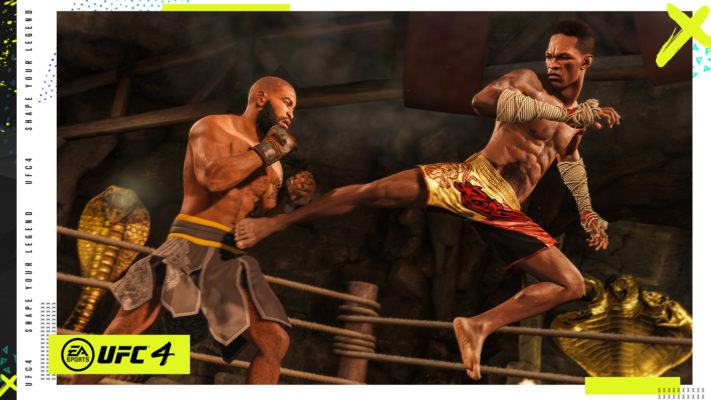 While striking is as entertaining (although still a bit flawed), the grapple game is a different story. This has always been an issue with an MMA game, as it’s hard to simulate transitions and counters on the ground. The way it has been done in UFC 4 is not all that different from how it was before. In fact, the new UI makes it easier to transition from the different guards, but it’s far more confusing because you don’t actually have a lot of control. It’s either get into submission territory, posture up for ground and pound or simply get up. You literally have to go back to the Legacy controls to get anything more precise, and if you played past games, they still aren’t the best, with it being far too easy to reverse someone on the top position. It’s not bad, but it isn’t the most intuitive way to establish the ground game, which is much more of a strategic element in real life. Submissions, though, are one of the few aspects in the grappling game where their rework is greatly appreciated. Instead of blocking one of four directional sectors, you’re now tasked with a cat and mouse mini-game where you’re moving around a circular UI while evading your opponent’s bar whilst they expend their stamina. It’s not drastically different, but its visual representation is much better. Clinch is also a bit better as it’s more responsive to your movement and animations to get out of it.

The Career mode has never been anything that special in the UFC games and that stays the case in EA Sports UFC 4. At the beginning it feels like they’re hyping something up by introducing a coach as he’s telling your upbringing from an amateur fighter to the big leagues, but there are few actual cutscenes, and the ones they have are so generic you may as well skip them. It’s not like you go into press events to trash talk your opponent or interact with them in any meaningful way; it’s literally you train and fight. You can trash talk the other fighter on social media, but there’s little incentive to actually do so as it limits your ability to invite them to your gym later to learn their moves, not to mention the hype meter is easy to max out in the later parts of the campaign. This is one component I wish EA Sports would put a lot more time into; I understand that it’s more of an RPG than it is anything else, as you’ll be choosing your training regimen every time you agree to a fight, gaining new moves and attribute points, but there’s nothing compelling here other than leveling up your own avatar. Actually, the RPG elements are one of the better components to UFC 4 as it truly makes you feel like you’re learning and adapting as a fighter. You’ll be able to put skill points into aspects such as striking components such as footwork, grappling such as takedown defense and conditioning such as chin strength. This is on top of inviting various fighters to your gym to teach you their own signature moves. 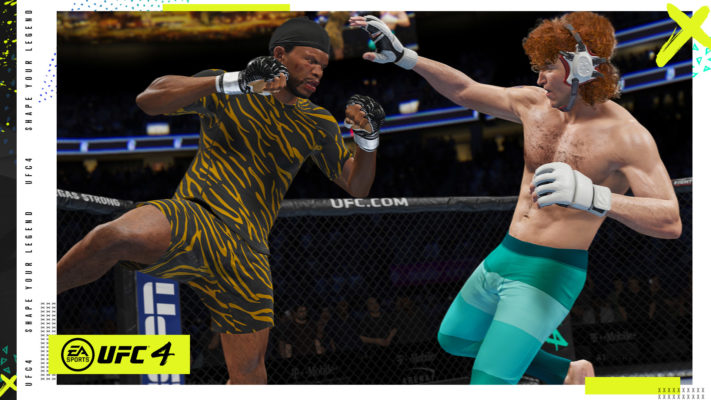 Sadly, there’s still plenty of other issues with the career mode. Not only is it light in building your story, but there are aspects such as terrible training AI that greatly drag down the experience. They are the softest training buddies I’ve ever seen, and if you knock them out, which will happen a lot, they will be out for numerous weeks, stifling your growth. It doesn’t help that there’s a randomness to growth boost, so it encourages you to throw specific moves each training session that it becomes a balancing act of pacing yourself so you don’t actually damage your braindead AI too fast. The post-game wrap up is also annoying, as while you can skip the highlights, it will force an ESPN social media feed on you to show you what happened in the fight – as if you didn’t already know. It’s not like they hide it behind a load screen, either, as when it’s done you’ll be forced to wait for it to load back into your gym. In addition, if you do want a challenge, I recommend selecting a difficulty higher than Normal as almost every fight ended in a knockout in the first few minutes of the fight.

Outside of the career mode, there are your standard online and offline modes. This includes standard bouts, an online world championship and Blitz Battles that are short matches where the rules are rotating. Offline is standard, such as your own tournaments, Stand-and-Bang and Knockout mode. The latter is what received the biggest change as it’s more of a standard fighting game with health bars and everything. It’s easily my preferred mode to blow off some steam, and this combined with the new Kumite venue, which turns everything into an underground martial artist tournament, with over the top sound effects, is overly satisfying. Unfortunately, what’s not satisfying is the customization options which have melded significantly with the microtransaction aspect. It takes forever to actually earn currency to buy anything. You can unlock random items through leveling up your profile by participating in fights, but again, it takes a long time to do so, making getting simple shirts or gloves a huge chore. And of course you could choose to buy their other currency with real money. 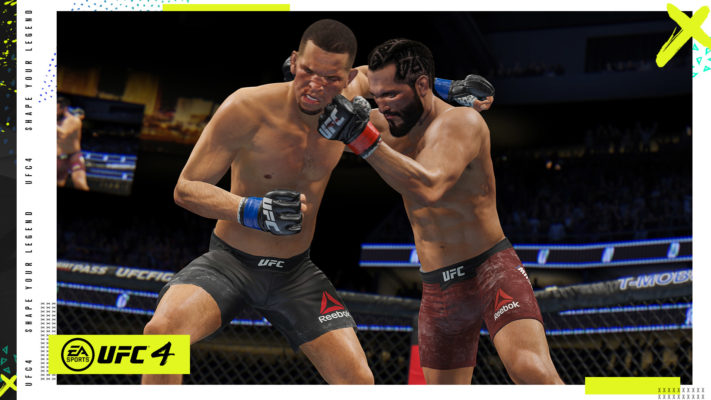 EA Sports UFC 4 is a fun albeit bland fighting game. For something in a biennial release cycle, we would have hoped to have seen more evolution to the formula than what we’ve gotten. The ground game has been simplified where it gives you far less control, although the clinch game has improved thanks to its animation-based restrictions. The striking controls can be a little complicated, to the point where the overlapping commands can cause a bit of trouble, especially when they consistently swap stances without your doing. The Knockout mode is one of the more appealing aspects of UFC 4, because combined with the new Kumite venue, it transforms the technical fighter into a slightly more arcadey one. Unfortunately, the career mode is just not good and is more of a chore than anything else, and the customization options, while plentiful, are suppressed behind a currency gate where it takes an exceeding amount of time to actually earn anything. Making a simple purchase of a pair of shorts is a lengthy endeavor. There’s a lot to like with EA Sports UFC 4 as it’s still an entertaining fighter, but it just doesn’t go beyond what we’ve come to expect from it.