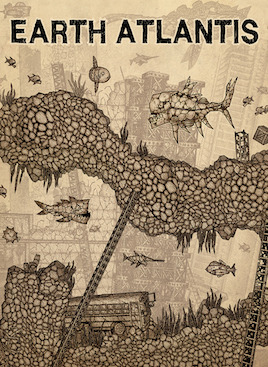 To their credit, where post-apocalyptic scenarios are portrayed usually as dire sways of debris-ridden wastelands — often involving guns…and people…and people who shoot said guns at other people — developers Pixel Perfex’s Earth Atlantis looks at such a hypothetical ravaging of the world’s plain with a bit more of an explorative, if still less-than-pleasant, angle. Not to mention that the underlining art and visual direction for the side-scrolling voyage is reminiscent of the type of historic, chartered exploring that is so often romanticized in modern culture — the earliest of mankind, whom scoured the seven seas in search of new land and new adventure.

From early glance, Earth Atlantis does look like it retreads the same swathe of exploration titles which many before it have happily confined to. It doesn’t aim to carve out a vast portrayal of a world predominantly submerged, let alone allow its player to discover the extent to which a rapidly-arisen sea level has done to our planet. If anything, Earth Atlantis’ distinct selling point is that it plays out more as a shmup than necessarily an adventure title. Slowly-but-surely building the power of your selected ship by way of dropped items, circumnavigating streams of opposing bullet-fire that, at their most frenzied, can have you tightening the grip on one’s controller with surmounted desperation. While the focus remains fixed on weaving in and out of passageways — hunting down a set number of foes before one can progress with the rest of the main campaign (Metroid 2-style) — the core gameplay mechanics actually make plentiful nods to bullet hell-orientated shooters and instill a more survivalist and thus conserved attitude when tackling the next big foe that lurks around the corner.

The post-World of Earth Atlantis remains perilous throughout — winding caverns and a labyrinth-style world making you think twice not only about whether to go charging in head-first into a swarm of enemy ships, but also which direction you take your trustee submarine in. Trying your best to take mental note of the routes you’ve taken, the courses you’ve plotted — ensuring you don’t get lost — but also being careful as to not get hit by a steady stream of bullets that vary from your standard pellet-like bullets to guided missiles to horizontally-sliding waves that can catch you off-guard, even lasers that bounce off surfaces and can turn a tight passageway into a perilously congested one. There is an admittance of frustration to be had over the fact that tunnels and particular sections can at times look so similar to the point of confusion as to whether you’ve actually retreaded the same path from not five minutes ago. Not to mention the in-game map, a hollow rectangular block at the top-left of the screen indicating only the most significant of details such as your current location, power-ups to scout out and even enemies to inevitably combat, is completely devoid of environmental detail. Meaning that the only way of knowing how close/far you are from a target marker is by simply watching the little flashing dot, that’s you, slowly move about the designated space. 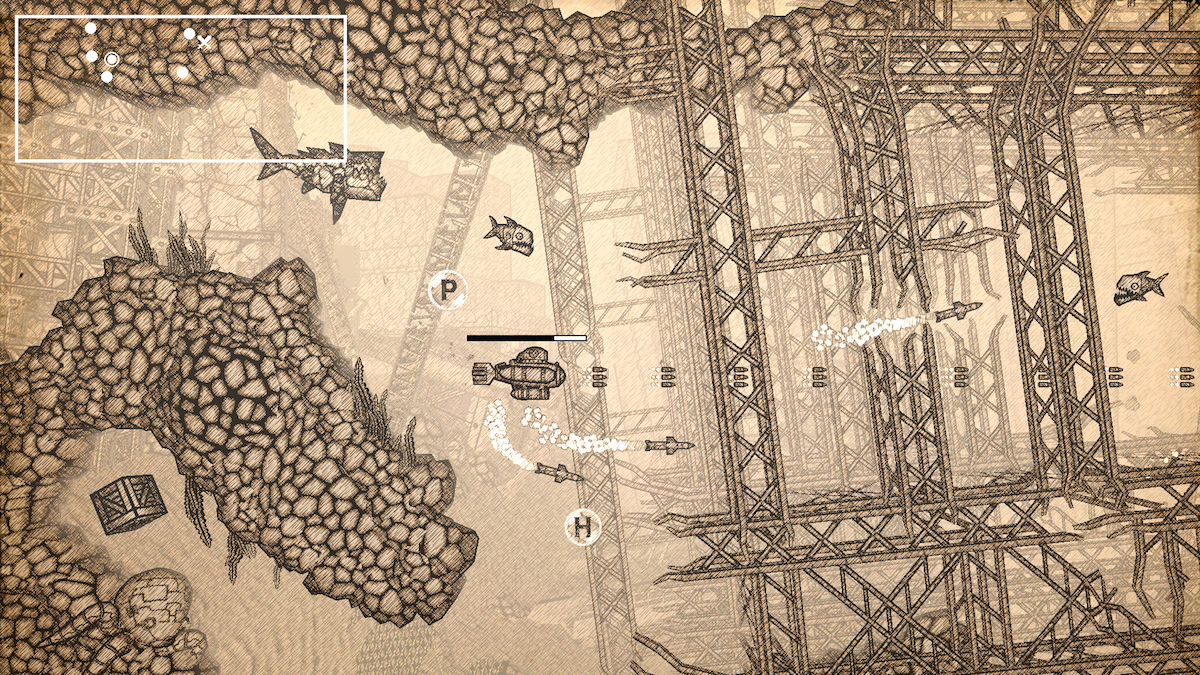 While this deliberately minimal detail does mean there’s plentiful of back-tracking to tolerate and even some frustrating “so close yet so far” moments of a desired entryway or exit located the wrong side of a rock structure you’ve inevitably come to the end of, it takes little time for your sub to work a way around and at last find the route you’ve been looking for. Throughout all of this, the game’s striking, hand-sketched aesthetic sustains its charm with its rough diagonal-line toning and thick outlined shapes — even managing to trip you up in the way some enemies even camouflage into the environment. Foes too, though predominantly spawn off-screen, can even emerge from the distant back-drop, even returning to it at points, creating a bit more of a lively and organic surrounding that, if not wholly dangerous, does require a bit more of an expanded attention.

Earth Atlantis‘ controls are simple enough with, alongside the obvious analog stick to move about in the direction you’re facing, a button that enables your ship to fire of course, but also one that allows for a quick one-eighty turn that even be used to get the upper-hand on an enemy, given that just like yourself, enemies are also required to turn around in order to attack. It’s this nimble and agile sense of movement that plays crucially into the campaign’s main objective, which is of course to hunt down a large slew of grander versions of the many enemy types you encounter. However, while these “bosses” of sorts may take on the appearance of regular foes albeit ten times larger, their attacks do garner a few different patterns and tactics to trip you up, And given that the classic shmup philosophy of get hit once, you die, resurfaces should you come into contact with the big bad’s themselves (or a more physical attack not pertaining to any kind of bullet-fire), while these battles do keep to a fairly bullet-sponge delivery, nonetheless require you to think both fast and smart just to keep your visible health bar from falling to zero. 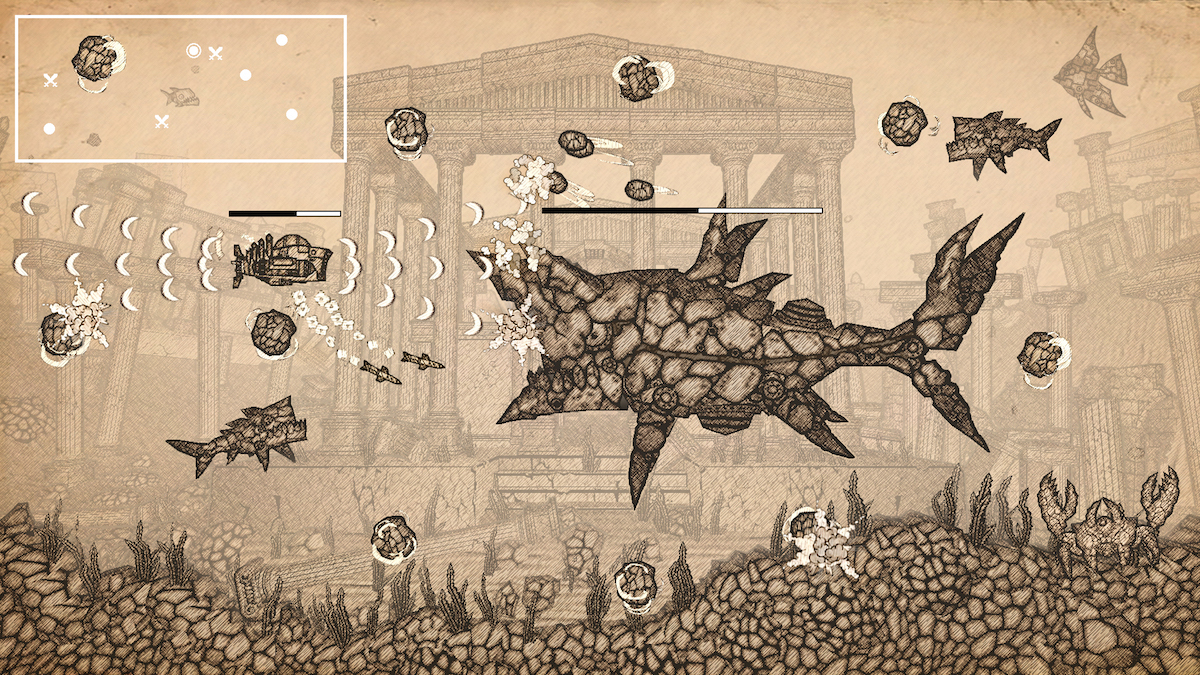 Should you die, no matter where you are in the world, it’s game over and while there are a few spawn points to unlock throughout the environment so as not to restart from the very same area over and over again, it does mean that your ship is back to its original base state and you’ll have to scout out the randomly-dropped power-ups all over again. Fortunately, no matter where you are on the map or how far you’ve progressed into the game, items — be they power-ups from defeated foes or even secondary weapons that can be scavenged from breakable crates — come at a frequent-enough rhythm. Your overall progress, be it the number of bigger foes you’ve destroyed also carries through so while it may feel like the game incorporates a perma-death vibe, the most important facet fortunately doesn’t itself reset upon death.

Even so, no matter how many times you may fall to one of the larger creatures, or perhaps kick yourself over such a basic and tiny mistake in-between such clashes, the game doesn’t necessarily possess the kind of depth or visual wonder that would facilitate more long-running play-times. Coming across more so as comparable to similarly compact Switch titles like Graceful Explosion Machine, Tumbleseed, or even Forma.8, whose own enjoyment can be had in quick, short bursts — becoming somewhat deflated and flatulent the longer you go on and recognize that its mechanics, if addictive, ultimately wear a little thin. As a title whose appeal predominantly centers around short-bursts, its spatial limitations do become apparent more often than not, especially when you find yourself looping back to previously-visited environment simply because a new boss (or the next in a long line of such) has decided to finally materialize. 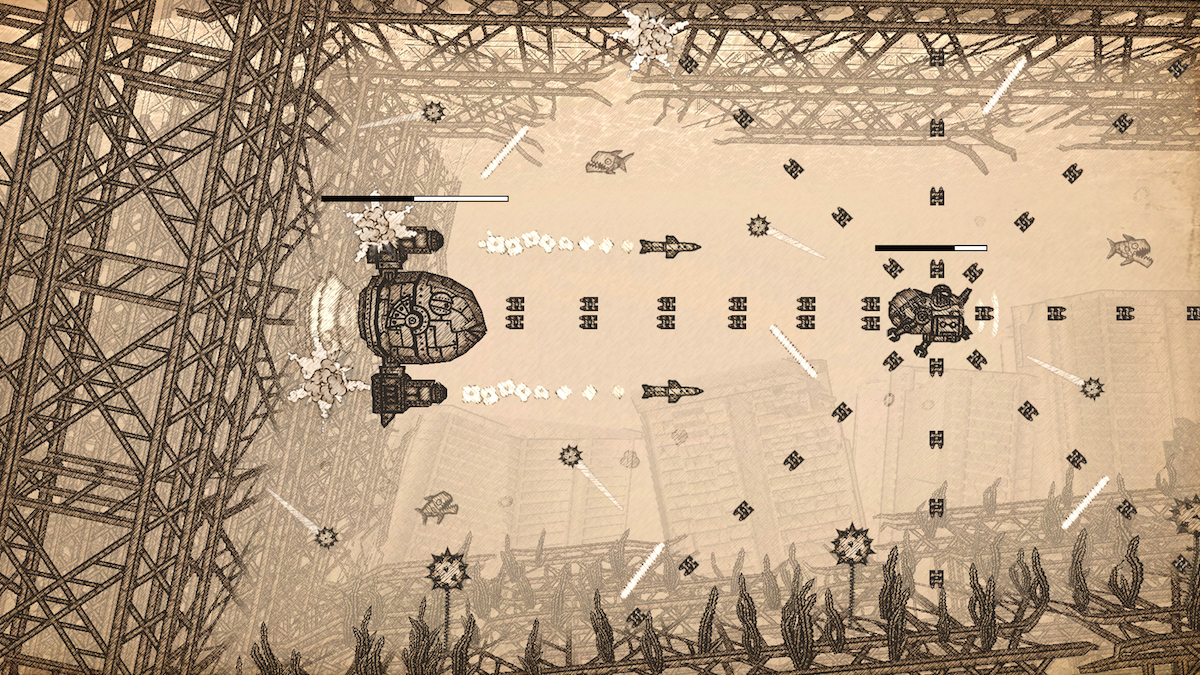 While the physical limitations of its content are clear, it takes little away from the intrigue and challenge Earth Atlantis generates through its fusion of explorative design with the shoot-em-up mechanics that it unquestionably pays homage to. The variety of boss designs (and the way the hand-drawn, sharp-lined visuals give them that added bold presence) and encounters are offered in just the right doses, and while they may feel at times like a chore just to arrive at, they come across as satisfying to partake in. Everything else surrounding it, if not startling or visually depth-inducing, does complement to a sufficient manner, ultimately shaping the journey through Earth Atlantis into one that can be savored but is easy enough to resume on later playthroughs.