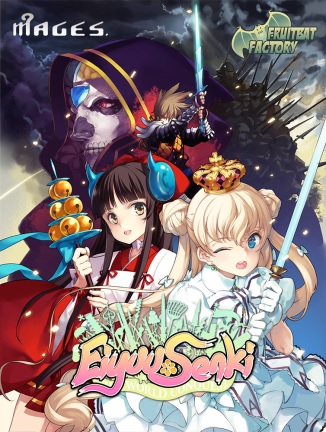 We’re at a point in gaming where developers are regularly looking to the past to draw inspiration for their future titles. Many times, this is done to elicit a sense of nostalgia and not much more; others, however, know how to evoke that strong feeling we call nostalgia while also managing to iterate on the formula they’re using as a template in intelligent ways. It’s that latter part which rings true for Eiyuu Senki – The World Conquest, a visual novel/tactical RPG hybrid from developer TENCO and localization studio Fruitbat Factory.

Despite Eiyuu Senki being a huge game, just from a pure text and length standpoint, it’s actually fairly straightforward in its design. It’s equal parts visual novel and tactical RPG at its core. All talking and story segments are carried out via text boxes, Japanese audio and wonderfully-drawn character portraits. The tale isn’t exactly a serious one, though, which is unfortunate because the undercurrent of the narrative is historically significant. Our protagonist here wakes up one day in an alternate universe where famous warriors from the annals of time are all scantily-clad females. So, well-known figures such as Oda Nobunaga, Billy the Kid and Napoleon Bonaparte have been turned into girls all vying for control and, at times, the player’s love. As one might assume, each of these renown fighters is out for world conquest, as the namesake implies, and our amnesiac hero is along for the ride.

As mentioned, the game doesn’t know how to be anything but comedic. While some of the humor hits the mark, thanks to a solid localization job by Fruitbat Factory, other times the jokes are stale and the writing even stiffer. The writing is especially a mixed bag in the beginning — this is mostly because there’s just so much dialogue at the start of the adventure that, statistically speaking, there’s bound to more problems with it than the other portions of the game simply because players spend so much time being set up for the actual gameplay. 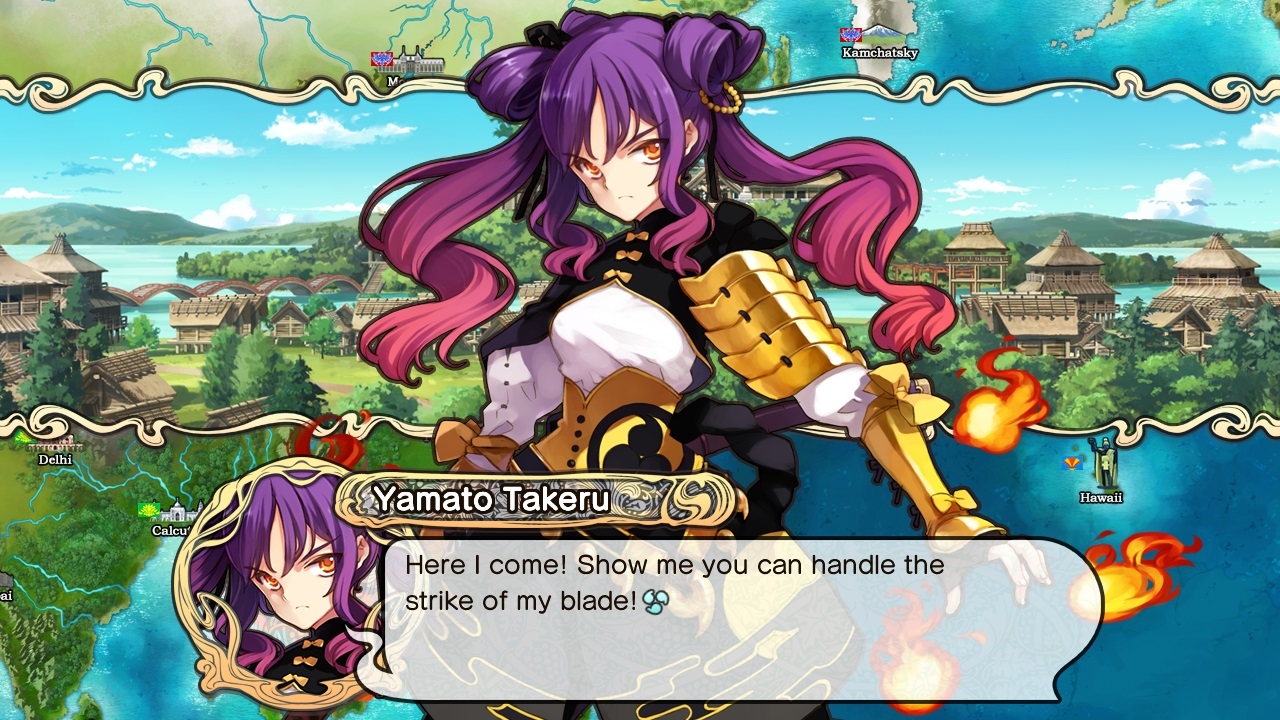 In fact, pacing is one of Eiyuu Senki’s biggest enemies; it doesn’t know when to pull back and let the player figure things out, or just simply play the game, and then when it gives folks free rein over conquering neighboring lands and settling scores on the battlefield, it doles out hours of action without ever bringing relevant dialogue into the picture that could drive the plot forward. This type of ” front loading” means that the first two hours (perhaps three) are painfully slow. Had we not been reviewing the game, we’re unsure if we would have stuck with it; it really is that monotonous, with uninteresting characters, and cliched plot hooks. Thankfully the characters become far more compelling as times goes on, and we ended up really enjoying the cast and their sharply written banter. There’s also a surprising amount of character development that happens over the course of the long adventure, which was great as the developer’s twist on historical figures is really fun.

In fact, that part about “fun” is perhaps Eiyuu Senki’s biggest draw and limitation. It knows how to let loose and be unapologetically silly, from its sheer premise to the scenarios and situations in which characters find themselves. At the same time, the potential for this to be an epic game of countries trading victories and defeats back and forth amidst a mature storyline could have been great. The Japanese gaming landscape has seen so many slice of life/comedy titles over the last several years, that having a game like this, even with its wacky premise, take itself seriously could have been fun in a different way than the kind ultimately delivered. 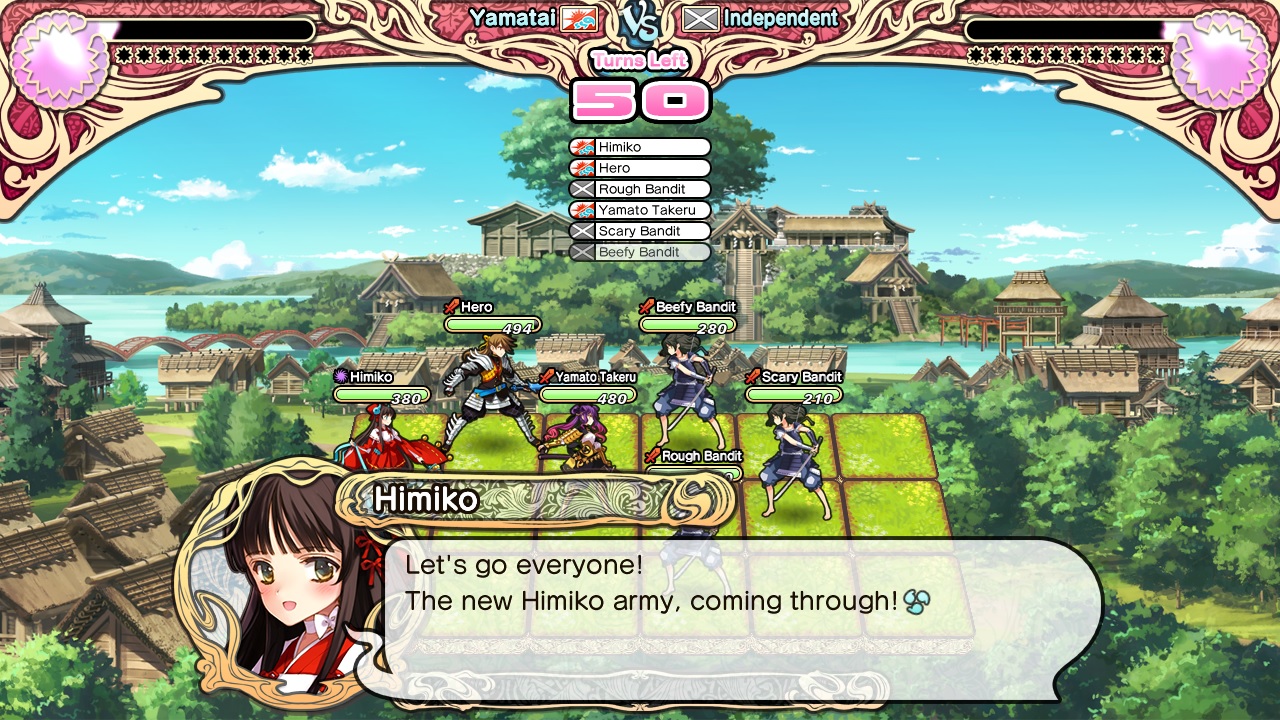 Fortunately, once those initial hours have come and gone, and players get more autonomy, the game’s potential begins to shine through. This is thanks to some really solid combat and customization mechanics that are about as close to a Dragon Force sequel as we’ll ever get. So, what does that mean? Well, gameplay is divided into rounds in which players alternate with the enemy. When it’s the player’s round to act, they’re able to carry out various actions. In the beginning folks only have two turns per round, but over time more unlock, adding further tactical depth. Each turn allows players to either attack other nations they’re at war with, or undertake missions. Because enemies are quick to counterattack in smart ways from the early-goings, Eiyuu Senki is a strategic game right from off the rip. RPG aficionados of this sub-genre will adore this approach — and rightfully so: it demands careful planning and tactical awareness from the get-go. In this regard, Eiyuu never holds players’ hands, and excepts them to adapt on the fly to whatever the title throws their way.

Thus, as once can probably figure out, combat plays a large role in the non-visual novel parts of the game. In fact, folks will spend just as much time making battlefield decisions as they will reading text, if not more in some cases. The combat engine is what some may expect: fights unravel on a grid where players pick up to six characters to take into skirmishes with them. Like any RPG worth its weight in salt, selectable characters here all have strengths and limitations, as well as specific attack types which carry with them that units combat range. So, when on the actual field of war, victory is ensured only by the effective choosing and subsequent placement of characters before and during battle respectively, while also deciding which generals will stay behind to guard one’s (hopefully) fledgling kingdom. Once the player has chosen where to place their generals and which skills they will use, it all plays out like Advance Wars, or the aforesaid Dragon Quest, in that the scene transitions to a side view of the two opponents’ armies as they unleash their barrages. The person with troops left standing is the winner of that battle. 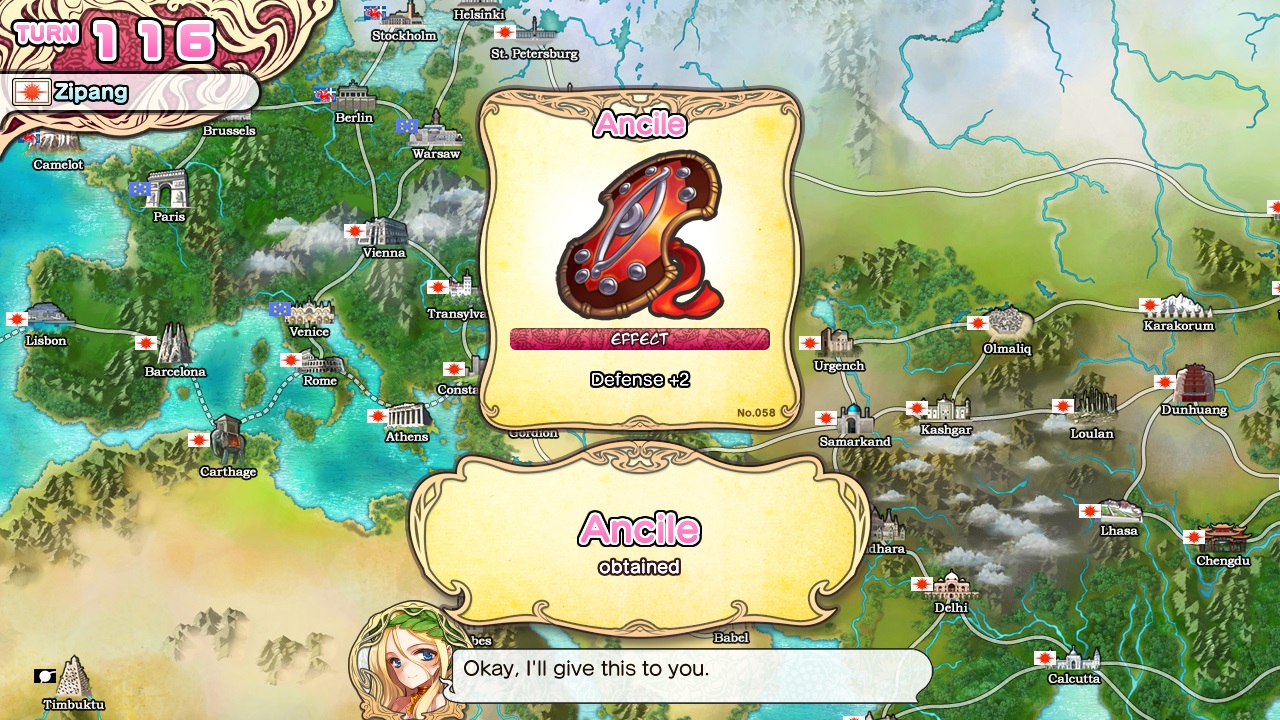 After battle, usually a player’s units will have been depleted somewhat, if not outright. Hence, it becomes important to decide how to spend the rest of their turn — do they spend a turn replenishing troops; do they spend the turn upgrading the strength of their troops instead of bolstering sheer numbers… These are the types of choices that must be made. While it’s all basic, sometimes even seeming more like a little break in the visual novel format than a full-fledged RPG, there’s enough depth to keep players come back for more. Even so, it’s undoubtedly simple. Naturally, there will be plenty who enjoy this more casual approach to what is sometimes a genre with a steep, intimidating, off-putting learning curve. Even if you’re one of those left wanting more, however, you’re still likely to enjoy yourself because what is present is rock-solid in its design and delivery.

Because all of this is fairly rudimentary, it’s nice that Eiyuu Senki is a looker. It’s not the best art direction around, adhering to many of the anime and manga norms we’ve come to expect over the last decade especially, but it’s vibrant and colorful, with inventive character designs that do a nice job at putting an attractive female in the body of a powerful warrior like Alexander the Great. The designs are imaginative overall, whether we’re talking about the characters themselves, the super clean UI or the accessible but lush overworld map. The soundtrack is also pleasant; there aren’t any stand-outs, but they’re all above average. It’s the typical fare though in this department, so anyone looking for a collection of tunes that are not fitting of a JRPG will be disappointed with what’s here.

Where the presentation doesn’t do so well is in the little amount of animation it has. Talking segments are relegated to headshots of the characters, poking around in town is merely a click-button-where-you-want-to-go setup and the combat animation frames are in the single-digits. In some ways, because of this, the game almost feels and looks like a Flash game. It’s unfortunate that more time and resources weren’t put into this aspect as the rest of the game, graphically-speaking, is easy on the eyes. 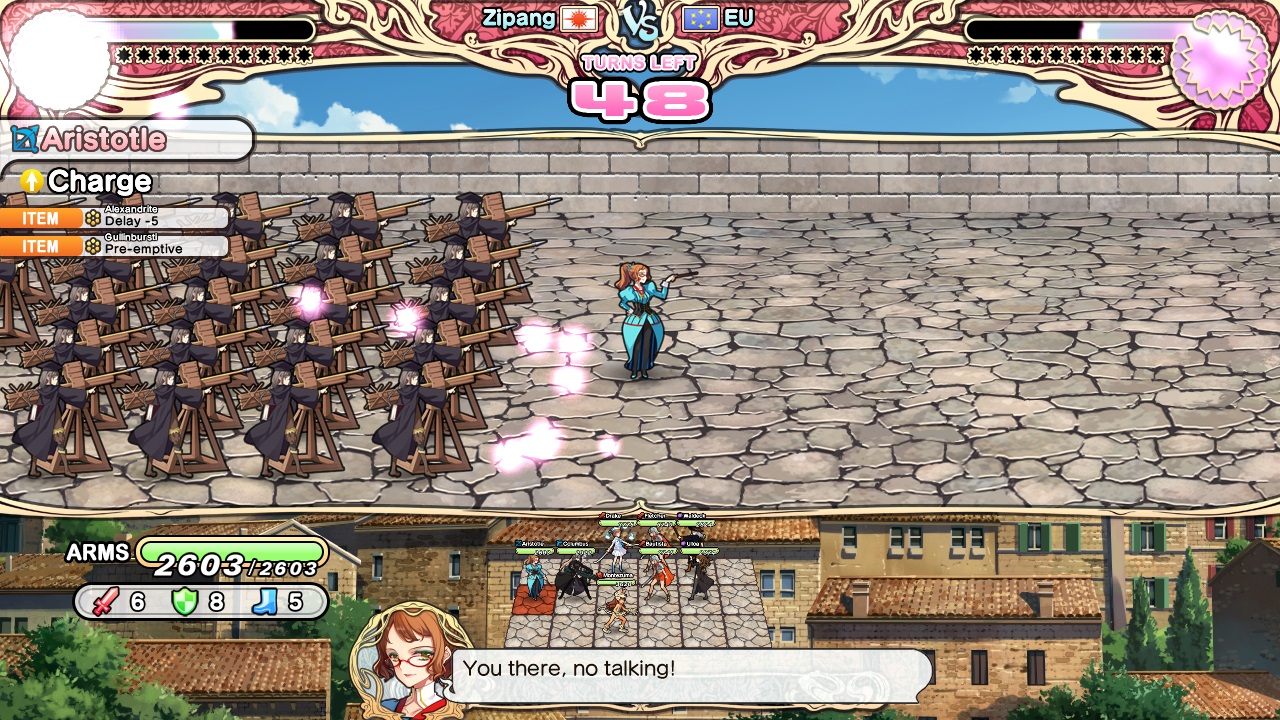 Eiyuu Senki – The World Conquest is rough around the edges, a little shallow and suffers from some serious pacing issues, but those qualms aside, it’s also a compelling take on the tactical RPG genre, not just by how it marries its SRPG conventions with those of a visual novel, but by how it handles combat and strategic decision-making. It never takes itself too seriously, which serves to both its benefit and detriment, but its unique take on being a harem role-playing game where the women seeking the hero’s approval are historic badass warriors. Thanks to a competent localization job and script, Eiyuu Senki is an all around fine game. It won’t make believers out of anyone not into the genre or art direction, but for those looking to pump just a little bit more out of their PS3 should at least consider picking it up.