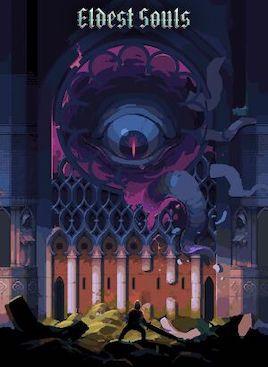 Twice now I’ve covered Eldest Souls in a brief, first impressions-style form and twice I’ve come away impressed. Not just by the way encounters with its myriad of bosses play out, but more so with the unique interpretation of combat, which may have led to bizarre comparisons. It almost feels turn-based, but it’s something I stand by and am far from ashamed that I’m haphazardly withdrawing it. No matter how baffled the figurative other side may be at hearing this. But it’s rare that a game captivates me like this purely from a mechanical aspect, to the point that one’s thoughts run the risk of sounding frivolous. How it configures and handles the fundamentals of gameplay — how players are meant to survive, let alone move and hope to land an attack or two at the towering, godly monstrosity they’re up against this time.

It’s clear that you need a hook or two if you’re going to go about brandishing a name or game title with the word “Souls” in it. And while a certain series with that word attached may not the undisputed purveyor of such things as apocalyptic settings, challenging boss fights and painstakingly-tight combat, it’s not hard to see why any game, let alone one entirely revolving around boss battles, would instinctively get a particular look thrown its way. Whether that’s one of curiosity, disdain or something in the middle; Fallen Flag, like so many before (and no doubt after) them, aren’t shying away from their influences. But honest this inspiration might be, replicating one of gaming’s most recognizable contemporary traits in game design will only get you so far. Originality, or at the very least a means to redefine that very modern standard, is what will truly sell your creation. Eldest Souls may not be the most lengthy or tangential of this crop of games. Its visual style and meandering between one vaguely-expositing NPC to the next may feel at times like some checking-off of requirements the game deems apt to include.

But it soon becomes apparent that the world, the environment, the reason for you and your nameless, silent-protagonist avatar being here is mere secondary to the real beating heart that lies at Eldest Souls‘ core. And that of course is its encounters. Encounters that are tense, addictive and more cunning in their design than the preceding fight. You may feel a swelling of disappointment to hear that its grand total of ten bosses will (on first run) last you around three to four hours. Providing you’re the kind of person who’s willing to push aside the repeated deaths and push through regardless. Put another way: I was a few shy of 100 deaths by the time the credits rolled, but rarely did that “one more go; I’ll get it this time” addiction slip during one’s time throughout. Even the more “frustrating” moments are that of a positive sort — frustrating not through some technical shortcoming or mistranslated limitation on hit-boxes or the like, but frustrating in the sense Eldest Souls had once again, somehow (despite self-assurance I would not be duped again) got the better of me. Fool me twice and all that. And I just about loved every minute of it; Eldest Souls has lived up to expectations. 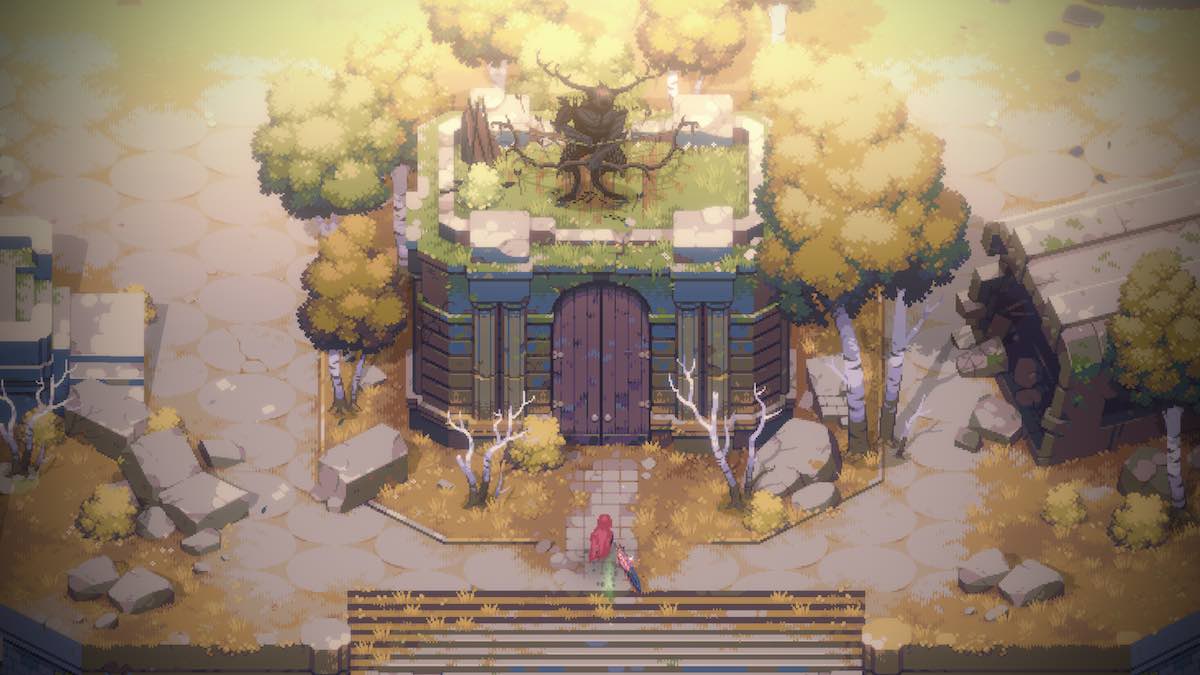 Naturally, the genius of the combat and natural progression is of course down to how you actually go about attacking. Unlike most games where a sword strike may simply be a tap of a button — or at the very most, a tap so long as you have the accompanying stamina to fuel it — Eldest Souls requires you to charge a strike and aim in the direction you want to move. Doing so, whilst of course making contact with said strike, initiates a Bloodlust state in which attacks are stronger, charge times for follow-up strikes are reduced and more importantly, valuable health can be recovered. Capped off with a more powerful blow that depletes the bar but if successful, recoups a sizeable portion of health. Now you may immediately be uttering the name Bloodborne as a means for easy comparison and there’s similarities here, the only difference being that players needn’t have to be damaged first to recoup said health. As is so often the case in later fights when you’re scrambling to stay alive on but a slither of red in that top-left bar, playing it conservatively so that only the widest of windows are exploited to recover health.

On paper this indeed sounds like an unnecessarily convoluted alternative to real-time combat. Why make it anymore difficult than it needs to be? And true, in theory, it’s an odd direction to take when simply tapping a solitary button to attack has already proven effective. Especially in a game where split-second reflexes are paramount and increased flurries of projectiles and area-of-effect attacks from foes will only grow the further in you progress. So why the change? Because what Eldest Souls brings, in doing so, is a fresh perspective on the nature of combat design. When to charge a strike, where to strike in relation to the enemy’s placement. And what’s more: how best to use your intentionally-limited three-bar stamina — an integral part of the cannily-strategic flair. This isn’t simply a case where spamming dodge over and over will get you out of safety; sure, it may help you for that one attack, but one of the core components to Eldest Souls — knowing when and where to act — extends beyond simply your own offensive capabilities, but one’s defensive mentality too. 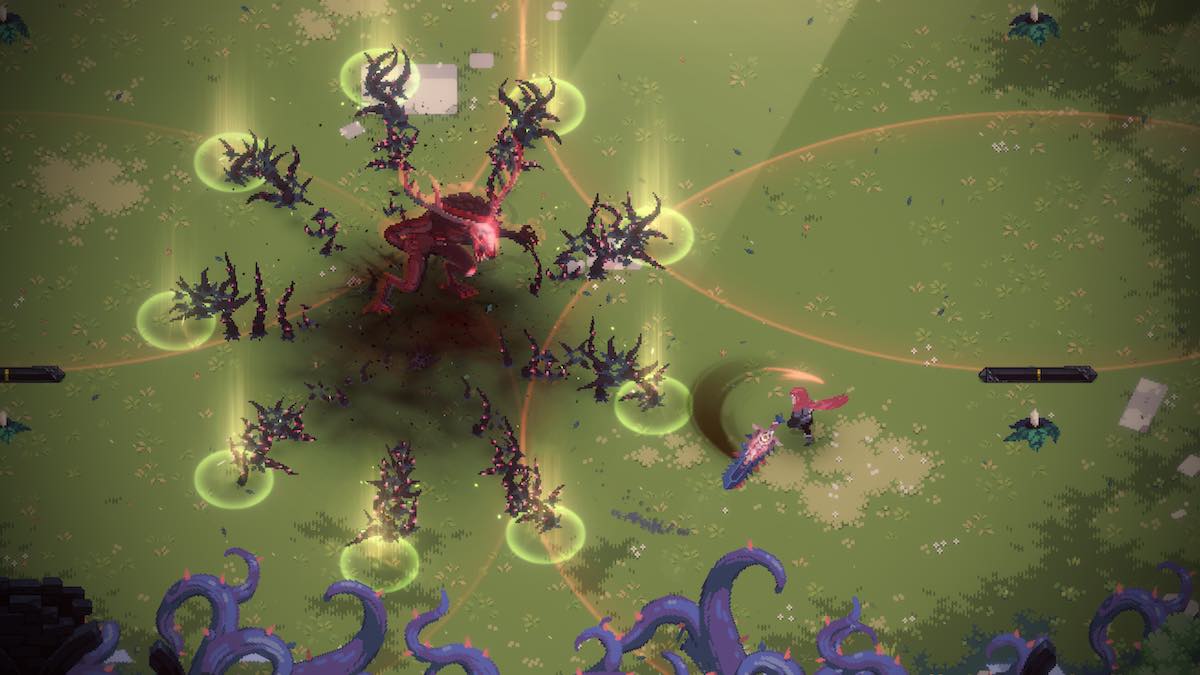 There are times when working out if one or two sections of stamina to use is the correct method. How far should one be from the boss at a given time, especially when you recognize that said foe is readying a string of attacks that require both the right amount of space early on and those precious slithers of stamina for the final few. Any miscalculation or misuse of stamina is costly. Yes, this is but another common denominator in any action RPG, but Eldest Souls takes this management of stamina, seemingly to its inevitable end-point. What if it were not a bar, but a mere handful of “get out of jail free”-esque tricks whose own charge-up’s only add to the stress and tension certain fights can perpetuate. For all the enjoyment one gets when you finally master the game’s aim-and-strike controls, it’s the idea that you’re in fact restraining yourself from acting too defensively, is what really sells these encounters.

Encounters that, on their own, wouldn’t stand out as much as they did without their own finely-crafted deliveries. Bosses that each pose at least one or two stand-alone gimmicks or means to briefly trip the player up, requiring one to quickly adapt or die in the process. To spoil any of the surprises would be to undermine how satisfying it feels to finally conquer some of Eldest Souls‘ more, dare I say, sizeable asks. Not least when an unexpected “other phase” or alteration to the rules crops up and you quickly have to respond to what the game throws at you. But rarely do these twists feel unjust or unwarranted and part of that’s down to how well-tuned and balanced Fallen Flag have managed to make each of these encounters. That temporary pain but consolation in knowing you’re peeling away more and more of a boss’ health the more times you jump back in. It may sound like a normal circumstance to expect, but it’s hard for a game to keep you hooked and convince you that victory is imminent, but Eldest Souls does this brilliantly all the while making sure it’s pushing players to their limits.

Even the game’s own interpretation of what constitutes as New Game+ should be commended. Where most games would simply turn the figurative dials and have aspects like health and damage output cranked up/down, Eldest Souls once again goes out of its way to surprise and startle once more. Enemy attacks become more complex and multi-phase — the window to time one’s evasion gets smaller, so as to juxtapose how larger/wider certain foe’s strikes and AoE attacks get alongside. But the most important difference is that New Game+ marks the point where management of the sum of mechanics — aiming, health-recovery, stamina management — are no longer beneficial, but necessary. Shocked as I was that even the second boss alone in NG+ goes about radically changing how you go about surviving that encounter, let alone finding a way to opportunistically chisel away at the boss’ health. But one of yet another round of surprises that Eldest Souls, if anything, only entices you more so to conquer — New Game+ so easily managing to triple one’s playtime past 10 hours so as to get to the final boss, all over again. Though if there’s one minuscule irk to draw, the emphasis on restricting the arena in so much as which parts are covered in damage-accruing elements could’ve been dialed back a bit. It’s a small, brief annoyance in what are generally fantastically-crafted sequences, but noticeable enough to mention. 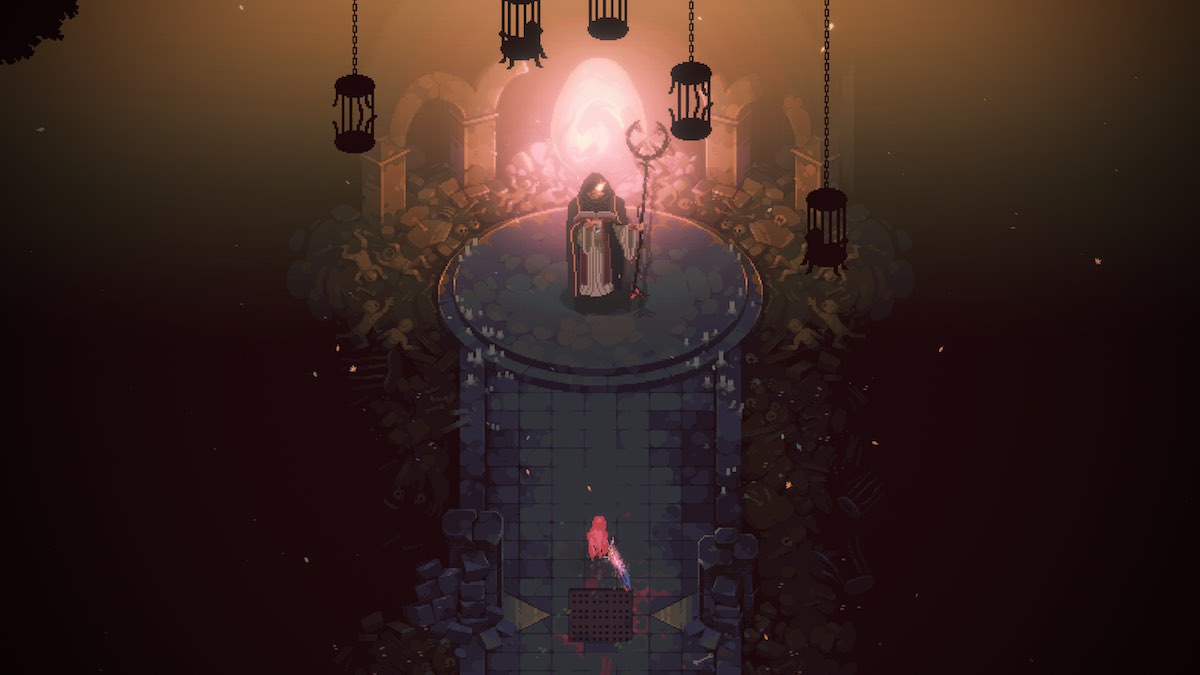 Without the unique interpretation and translation of combat, Fallen Flag should already take comfort in the knowledge that their crafted series of boss fights are at least visually and mechanically-attractive enough to warrant a punishing trudge through to the credits screen. But it’s the way gameplay and control of such is orchestrated where Eldest Souls‘ appeal — and ultimately its fulfillment on one of this year’s more inventive takes on boss rush titles — is realized. Strange as it may look from the outside to confine a once-free flowing style of real-time combat to this stop-start, tactical alternative. But Eldest Souls orchestrates the right kind of difficulty curve — that only grow in both intensity and complexity — with a plentiful amount of twists and turns that are sure to trip players up, but immediately pull them back in. Even as the death count just keeps racking up higher and higher. It’s one thing to craft a game with such an entertaining yet punishing series of fights. It’s another to do so with the kind of design philosophy that’s so quick to convince it more than deserves its rightful place. But that’s exactly what Fallen Flag have achieved with seemingly impeccable ease here. Bold, brilliant and consistently surprising throughout, Eldest Souls’ fresh approach to combat marks one of 2021’s real gems.