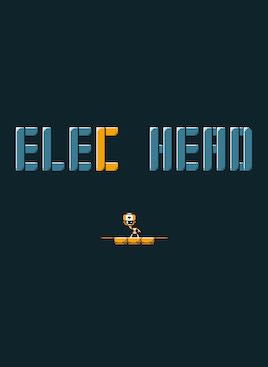 Coincidental it may be to have recently played two puzzle games in quick succession, a benefit to such a schedule is the ability to marvel at the subtleties developers (or even lone creators as the case may be here) can harbor in such a genre. As risky these types of games might be on the basis of their challenge — the way puzzles themselves are constructed and how little they give away — there’s always respect and admiration to take away in the type of releases that excel, maybe above all else taking place, in doing so much with so little. Playing through ElecHead — brief a venture it may be in its three-to-four hour run-time, even with the incentive to 100% optional collectibles — I’m reminded of genre highlights in the past few years whose aesthetic minimalism in no way signifies a game lacking in challenge or mechanical depth.

From Linelight to Baba Is You, if there’s one thing the Puzzle genre has proven above all else as of late, it’s that artistic “complexity” needn’t be some mandatory do-or-die requirement. BoxBoy is a series all about a literal box-shaped character in a greyscale setting, but the progression with its puzzles are crafted in such a way that the novelty feels anything but exclusively sanguine. ElecHead, by lone developer Nama Takahashi, is another one of these examples where the minimalism of its aesthetic reveals itself as more than just some breezy, easy-on-the-eye attraction. As confined the color palette is here — limited to Game Boy-esque, pixellated shades of steely blue and pale orange — and as brief a time one will spend in getting to the end credits, the best moments of a game of this size and stature, are those that acknowledge the scale of its construction. But more importantly, play with it in clever, at times charming, little ways. Utilizing space and the power of presumption more so is something ElecHead has by the truck-load.

It’s not hard to see; rather like a game such as Sabotage’s The Messenger in terms of level design, ElecHead speaks to a period of games around the NES/Game Boy era where the confines of screen-space in a way felt like a mini-challenge in of itself. To get past that latest hurdle, only to see what slightly-more complex challenge was awaiting you in that next interconnected concentration of 2D geometry. Maybe it’s that very miniaturizing of the experience that’s the real charm. That deliberate decision to restrict visuals to that of a handful of colors and the soundtrack to a quick darting of upbeat chiptunes alike. And as mentioned, puzzles revolving around simply getting from the start of a confined space to its accompanying exit where another conundrum is sure to be. Or perhaps something else entirely — something that may, or may not, reveal itself in another form later down the line. To reveal anymore beyond this would be to spoil a late-game sequence that’s so lovably “pulls back the curtain” yet straight-forward in its actual delivery, even I had to stop the first time it happened and admire what ElecHead had seemingly conjured. 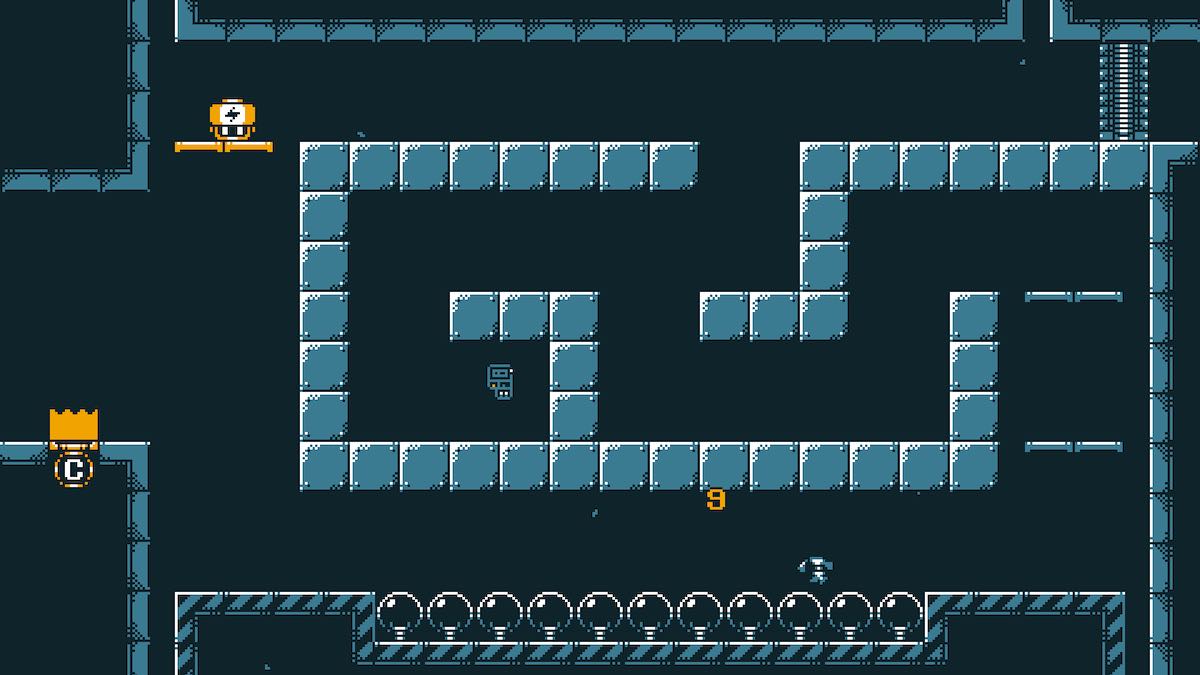 Or again, not conjured. Because it’s the manner in which the solutions unravel themselves — and how ElecHead so wonderfully maximizes this minimalist palette — where the real joy stems from. Another example where the term “less = more” is not just a sound-bite, but one that undoubtedly holds immense power. How the trick to puzzle-solving in ElecHead is itself straight-forward but in no way signifies some lacking in gameplay depth. Your robotic character can conduct electrical charges on any floor or surface it touches. And as such, can enable adjoining devices like platforms, barriers and later on, turrets, to begin working — regardless of their benefit or possible hindrance. Losing contact naturally means the devices disable — reverting to their default pale-blue shade. As basic this premise sounds, it takes little time to get to grips with the visual language the game leans on especially to properly detail what’s required. A testament to how well arranged and designed levels often are in ElecHead is that everything you need to know can be surmised in a matter of seconds.

Better still, how the game provides just enough of a clue or suggestion to have players relatively quickly work out the right sequence or order for success, if not the speed at which said sequence is pulled off. Meaning that puzzles more often than not revolve around which areas of the level to make contact with and when. ElecHead only has one key upgrade to collect on your travels — the ability to separate your conductive head from your body — and while the run-time alleviates concern about variety, the resulting evolution and complexity of puzzles is wonderfully sufficient regardless. Because a lot of that expectant evolution and growing complexity has less to do with its own capabilities and more to do with how ElecHead leans more into the finer points of 2D level design. How part of the trick with deducing and figuring out solutions is as much about what’s not on-screen as it is about what is. 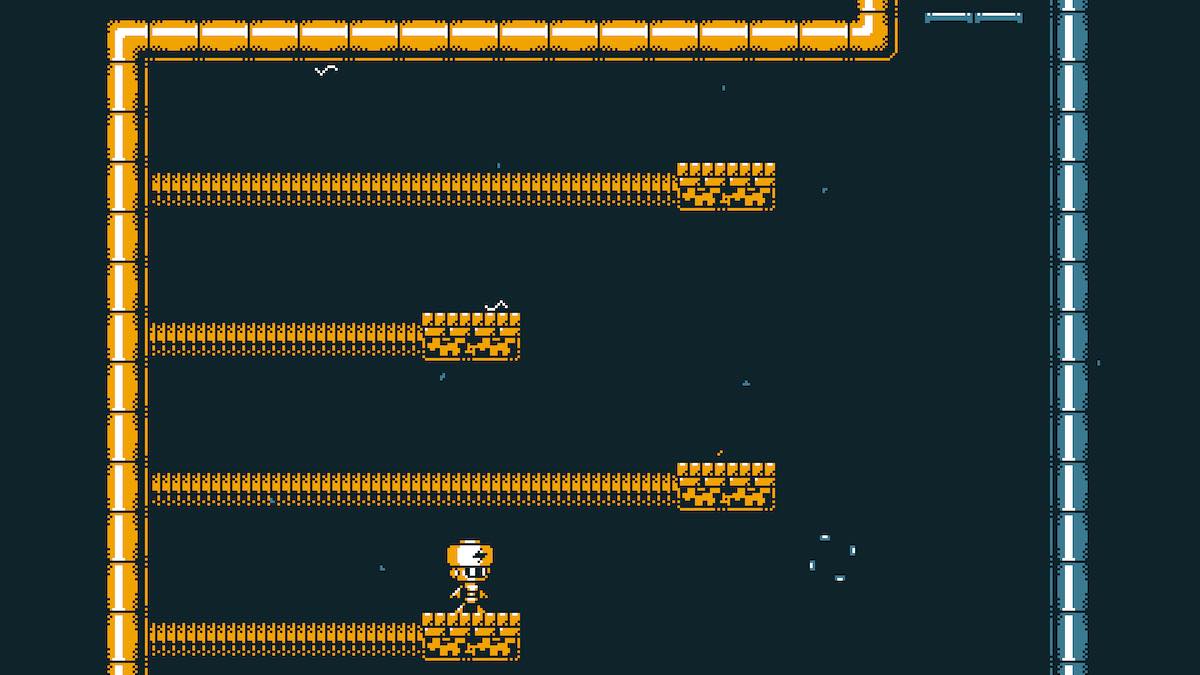 There are plenty of moments sprinkled about in the game — not least in the latter half — that are more reliant on how these enclosed spaces may be linked or may react depending on actions undertaken prior. Again, without spoiling anything, it’s likely players will make basic mistakes on first run-through, but while those errors may mildly frustrate, that annoyance quickly gives way to a growing respect and admiration for how well ElecHead translates and explains itself, without providing a single piece of text or overdone button prompt. The only prompts provided at the beginning and at the point of acquiring that lone, body-separating ability. Even at the most cryptic and obtusely-secretive as to its solution, ElecHead brilliantly straddles the line between vague and suggestive. Part of that success, again, lies in its trust of player deduction. A solemn, isolated noting of an out-of-context number (or at least, what is first perceived as completely contextless). Baffling in its implication given the only time you’ve seen a number prompt is when you…oh, so that’s what it means.

There are so many of these great moments of realization in the game. It’s not the most visually-striking release — even of its respective genre of this year, let alone this year’s entire plethora of releases — and there’s of course an argument to be made that maybe more of a narrative investment could’ve given its barebones setting more immersion. Relegated to but the most fleeting of suggestions of a setting, a goal, a reason to care for the character you’re controlling. But as much as these nitpicks are justified in their presence, ElecHead‘s stripped-back approach does a vast amount more good than bad. Especially in those aforementioned moments where solutions conjure yet one more moment of relief mixed with admiration. Admiration for how the game deliberately gives players room away from unnecessary hints or blatant give-aways and let’s the levels themselves be the loudest guiding voice of them all. For anyone with a vested interest in level design — especially a retrospective one to those former decades pre-2000 — ElecHead‘s gaze while understandably nostalgic in parts reveals just how timeless those former-generations’ best still stand the test of time. 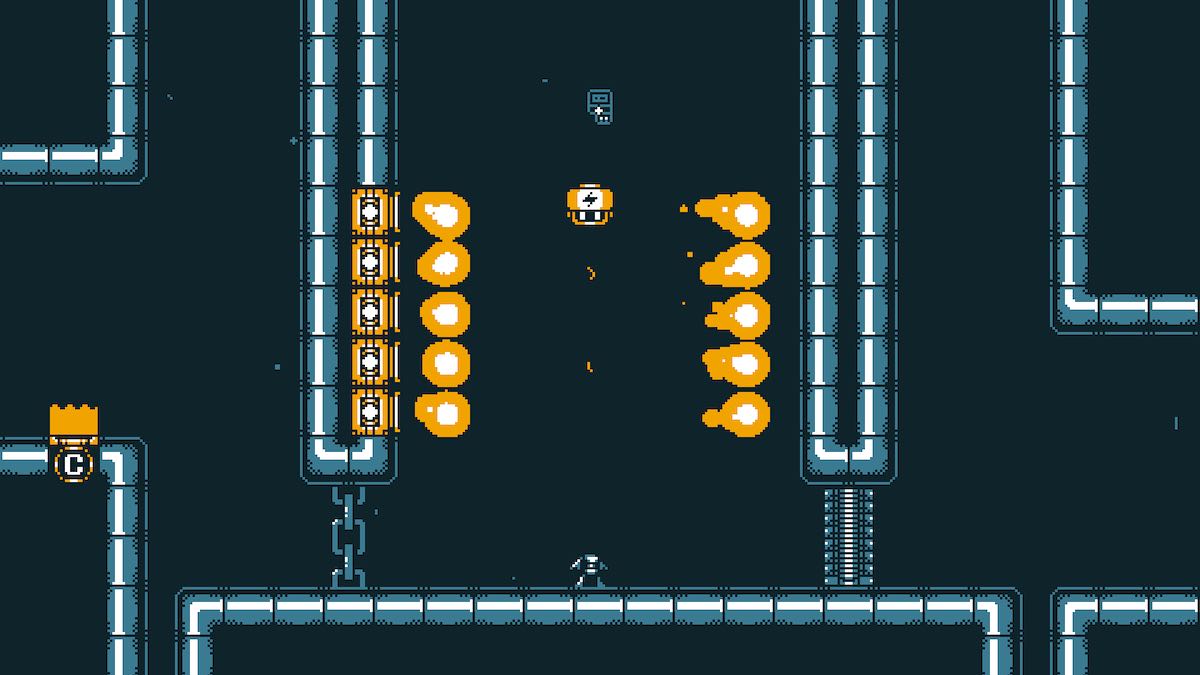 Even in the context of notably high-quality “short” games of this year, ElecHead‘s three-to-four run-time and sparse replayability may look like it doesn’t do the game any favors in convincing you this is a run-time to bother investing in. And with such a visual style — added to by a fairly non-existent narrative and means to invest in its chosen world — and orchestration of levels on top, you’d be forgiven for thinking the game’s heart has overruled its head with something that feels more indulgently nostalgic than it is relevantly contemporary. But while that retrospective focus on the nature of 2D design is apparent, it’s that very reliance on the visual language of level design why ElecHead is so excellently-crafted a puzzle game. One whose subtleties and routes to success are integrated in just the right spots and at precisely the right times. Nama Takahashi’s creation here is not the most extravagant nor is it the most lavish in detail, but that marriage of an easy-to-grasp gimmick and reliance on visual suggestion means ElecHead is not only striking, but joyous to play through too.