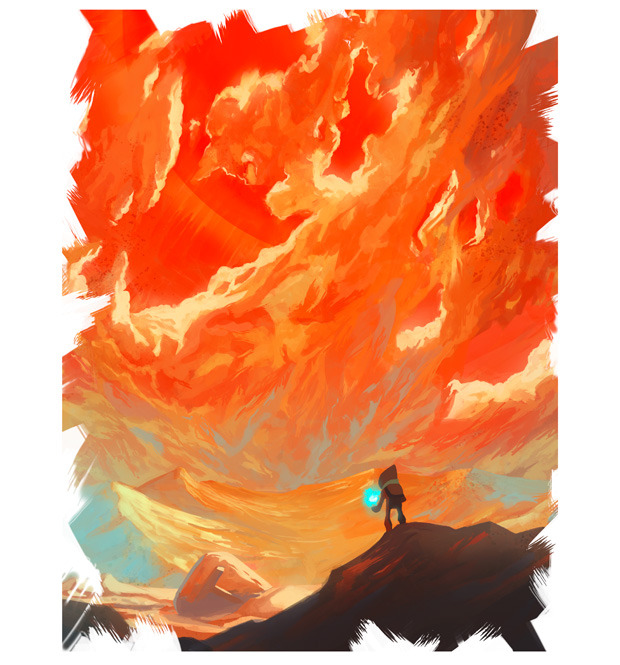 Elegy for a Dead World

Elegy for a Dead World is an enigmatic game about writing fiction. You are a lone explorer in this unconventional adventure, tasked with telling a story that will serve as a fitting elegy for the deceased worlds that you visit. These are places that have no presence in history, and so you’re the only one with the power of forging their legacy. History may be written by the victor, but here you’re the distant bystander who will pass on the essence of what once was.

Players assume the role of a nameless astronaut lost in the endless abyss of space, surrounded by three portals with each leading to a lost civilization that is now a mere shadow of its former-self. That’s really the significance of Dead World in the game’s title, as each of the three dimensions available from the start depict the cold remnants of a forgotten world. As vague and mysterious as everything will seem from the outset, there is some underlying substance to these locations. For one thing these places actually do have names, and their visuals and presentation are inspired by famed literary works. Shelly’s World, the setting that was available in the preview build, is based on the sonnet Ozymandias by Percy Bysshe Shelley. Then there is Byron’s World, which is influenced the apocalyptic poem Darkness by Lord Byron. Finally, Keats’ World takes inspiration from the existentialist themes of John Keats’ aptly titled When I Have Fears That I May Cease to Be. These poetic works not so much mold the presentation of the hauntingly beautiful worlds presented in Elegy, but rather these runic civilizations have been carefully designed to invoke similar sentiments as their literary inspirations.

Upon entering one of the portals, you find yourself passively exploring handcrafted 2D environments using a character that comes equipped with a jet-pack to move things along. However, during your first time you will want to take things slow and really absorb your surroundings. Elegy for a Dead World is a visual experience first and foremost, featuring locales that will leave you in awe with their artistic intensity and attention to detail. The use of contrasting colors and stark lighting effects in particular add a beautiful surreal touch to the backgrounds and every inch of it looks like something that would fit right into a postmodern art gallery. 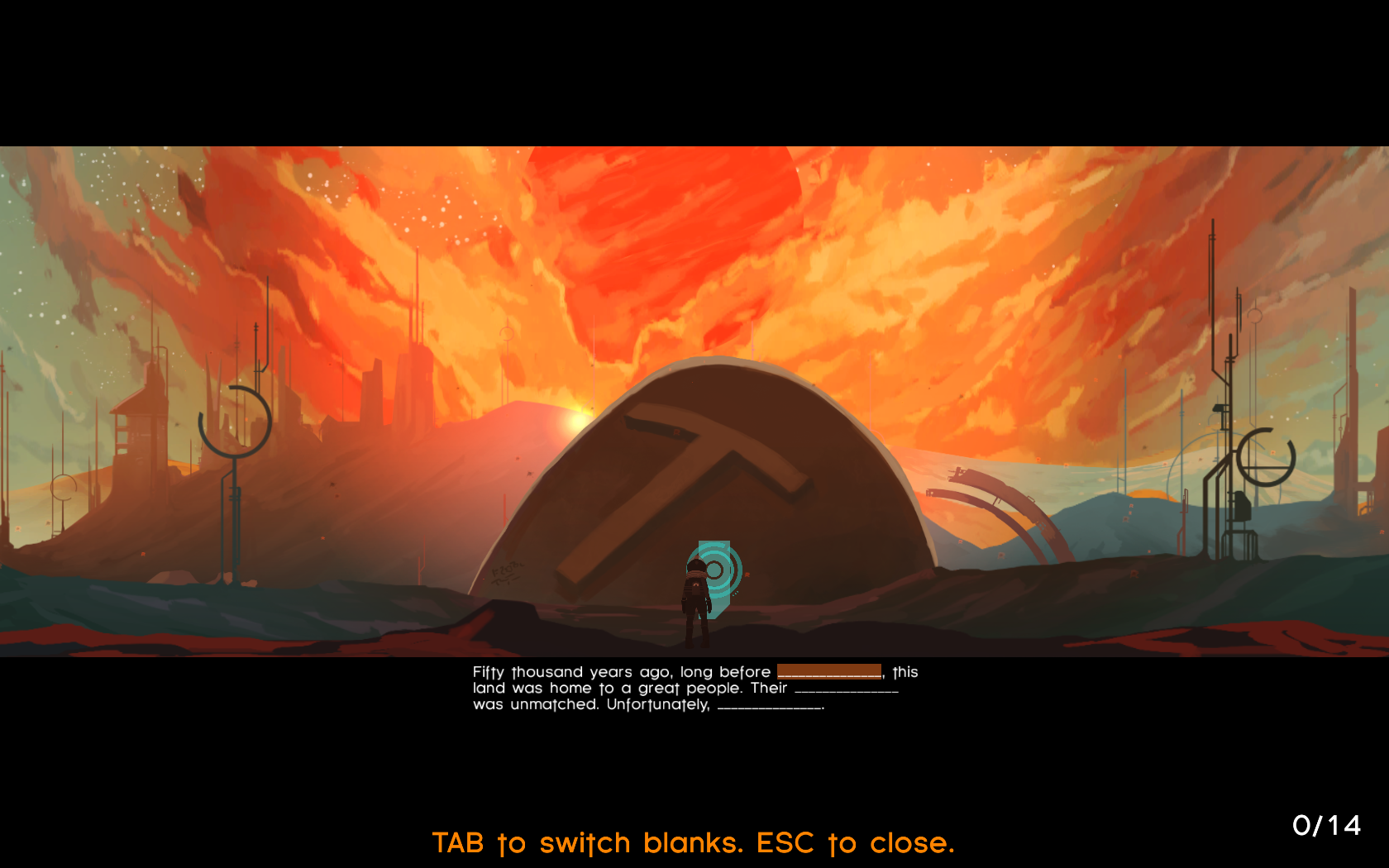 Postmodern is perhaps the best way to describe the aesthetics of the unique ambiance presented, where every nook and cranny of the abstract landscapes are intended to inspire you at an intellectual level, which then prompts you to compose a prose of some sort. This composition can take the form of a narrative, poem, or even something left-field like a letter. To further complement the meaningful art style, the audio design is put to great use to invoke feelings of awe and solitude, putting the player in a melancholic state.

While you do indeed control a character in a 2D style adventure, this game is primarily about being a wordsmith where the main mechanic involves using your mind and your keyboard to simply write. Elegy gives the player complete freedom to express themselves however they wish, but to add some interesting substance there are a number of preset writing prompts for those wishing for some guideline or even a defined challenge. Prompts don’t necessarily restrict a player as even the suggested templates can be edited out, but there is interesting variety in the types of cues that you can work with. These hints include preset narratives with missing blanks to fill in, ideas for composing a poem, templates for a letter, and even exercises where the player gets to put on their editor cap and fix errors in paragraphs presented to them. If you chose to make use of these prompts, then the game world will present certain spots denoted by feathers, and these are basically cues for you to chime in. The prompts are a worthwhile inclusion that certainly add some some form of tangible objective, and there is a wide array to choose from. However, if you choose to disregard these prompts entirely, then you can basically go free form and compose your own literary work from scratch. 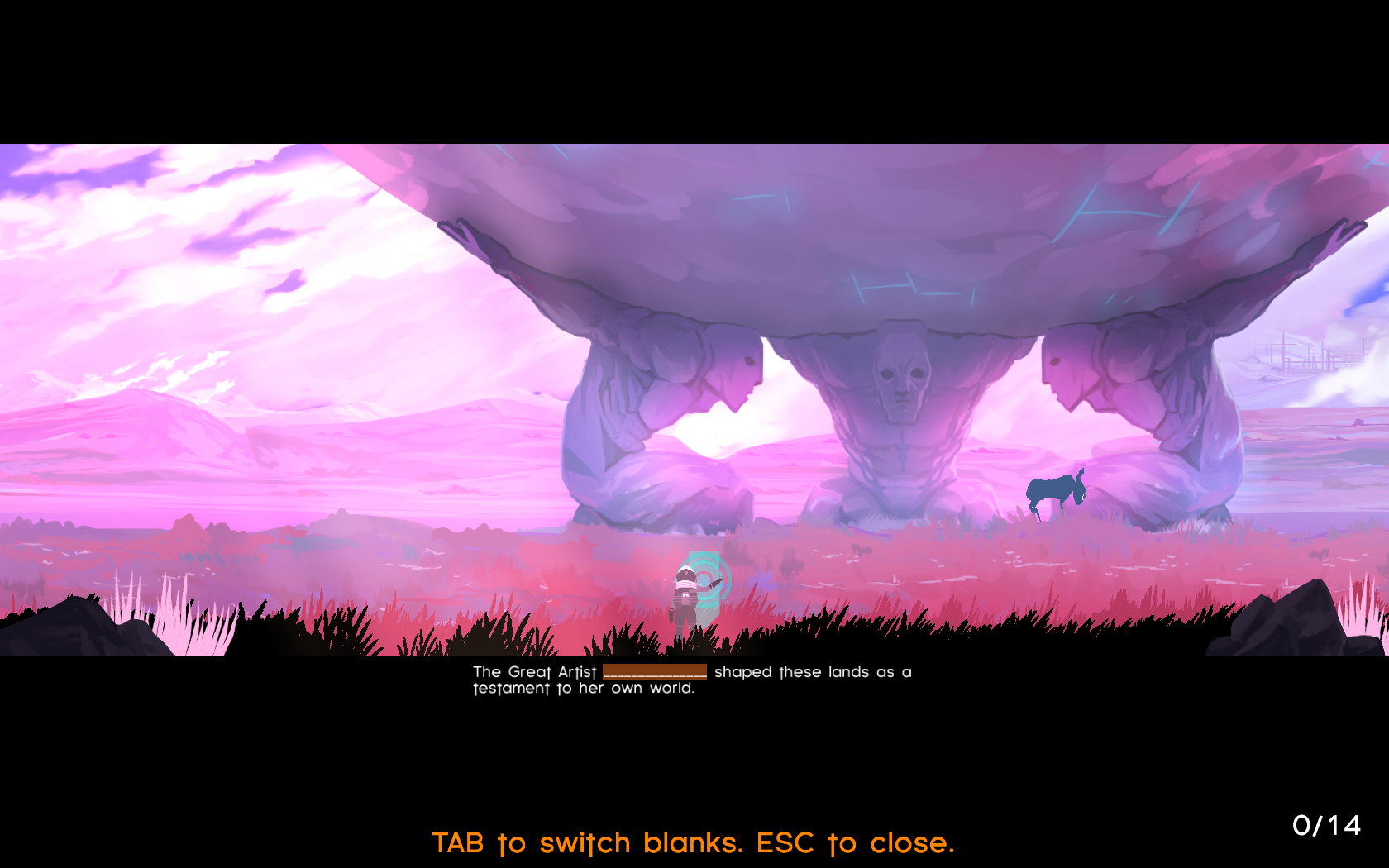 Once you finish composing your work, you’re then given the chance to publish it onto the game’s server for the community to see. Published works resemble picture books and they look quite lovely. That is essentially the end goal of the journey, to share your work with others and so there is no apparent reward. However, your readers will be asked if they wish to commend your work, and so success in Elegy is measured in terms of how many commendations you get for your published compositions. Even the limited achievements on Steam are solely built around this commendation system.

It is clear that Elegy for a Dead World is intended as a platform for aspiring musers, and so its longevity is determined purely by the player. It will take minutes to simply skim through the available content, but whether you end up spending days, weeks, or even months indulging in the fine details, that will solely depend on you. This is a game about creative writing alone, and so the only limit is your own interest and above all, your creative spark and imagination. 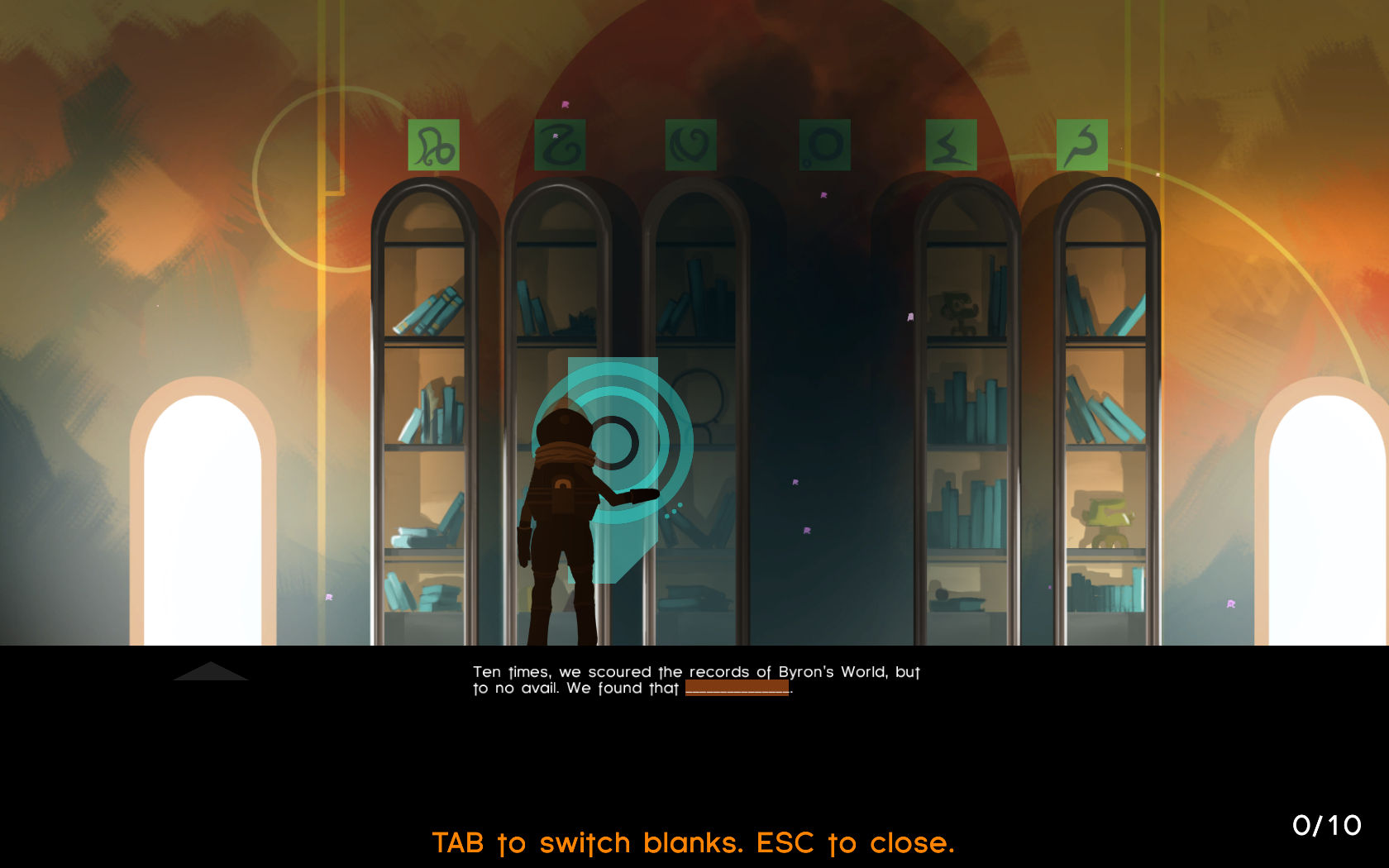 Something that is fueled by subjectivity alone becomes a challenge to evaluate objectively, and perhaps even unfair, but Elegy for a Dead World still presents an experience that is all inclusive and doesn’t look down on anyone who doesn’t fully comprehend it. The beauty of it is that it will speak to almost anyone, because whether it’s part of your education or one of your passions, writing and literature is an integral part of anyone’s life, and so Elegy serves as a welcoming platform for anyone who wants to practice writing and polish their craft. This is a title designed to inspire the best out of anyone, and while it may objectively fail as a video game in the purest sense, it still indiscriminately embraces the player and puts them in full control as the narrator. Elegy for a Dead World may be a jarring departure from traditions, but unlike the more pretentious attempts at alternative gaming experiences we’ve seen in recent times, this is one idea that should be encouraged.