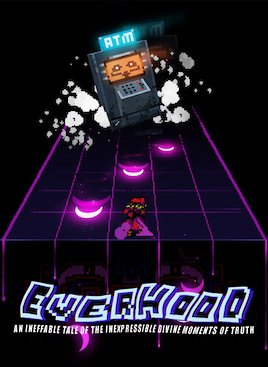 Foreign Gnomes have clearly played a lot of Undertale and clearly adore it from the looks of it. They know of the game — they know its make-up, secrets and eventual unraveling — and what’s more, they know that many more also know of Toby Fox’s 2015 eclectic mix of subversion and breaking of conventions alike. All wrapped up in a simple get-up that at first suggests basic simplicity — the least-required appealing to SNES-era nostalgia — despite its excellent writing and reminder that more often than not, those that appear silly and goofy (assumably lacking punch as a result) are often those with the biggest heart. As hard as it is to come to any review or assessment, or simple opinion, of Everhood without Undertale being mentioned, is understandable albeit admittedly a tad frustrating. You can’t really begrudge such a knee-jerk comparison, but it does run the risk of establishing would-be expectations in developer Foreign Gnomes’ own brand of sparse worlds, odd-ball characters and comical writing.

Everhood is — though not entirely in absolution — a different case. A game that does rely on the same aspects and attributes to keep players fixed and invested, if sufficiently, in what’s taking place. But whose message, whose themes (themes that only truly kick into reflective, emotional gear around the final third) and more importantly, whose primary gameplay premise, is entirely its own. Everhood is not without a few nagging issues, as most games generally are. The writing could’ve benefited from a couple more proof-reads — grammatical errors popping up from time to time. Similarly, its control feedback, that can result in an even rarer-but-annoying disconnect between input and what actually takes place on-screen, may have needed a touch-up at points. As mentioned, there’s likely to be those first couple of hours that potentially give off a worrying impression that there isn’t more going on — that what we see is indeed what we’re going to get.

But in all honesty, it’s the kind of nitpick criticisms that in the end are eclipsed by everything else taking place. Both before you…and deep within your chemically-stimulated brain. I’m not ashamed to admit I was on the verge of tears come the closing act. Just as the emotions of its final act suddenly hit me all at once like a freight-train. As it finally begun to wrap up its eventually-bittersweet tale. A tale whose accompanying gameplay and audio-visual presentation even up to the closing parts also acted as if exerting sledgehammer-like force to the foundation. Established formula shaken up in surprising, genius, at times baffling but inevitably understandable ways. Whose very soundtrack and the reasons for its brilliance can be surmised by its climax. Rivaling such moments — where the impact of a story/route and the very structure of its music convene — like The Weight of the World, Always Been But Never Dreamed and indeed Your Best Nightmare. Slightly off-base, but I’m reminded too of all the great, memorable album-closers in my extensive library. Old, somewhat-old; familiarly-acoustic and out-of-nowhere alike — tracks on a record that have too made me near teary-eyed at just how hard they’ve struck on first play. Taps side of head. 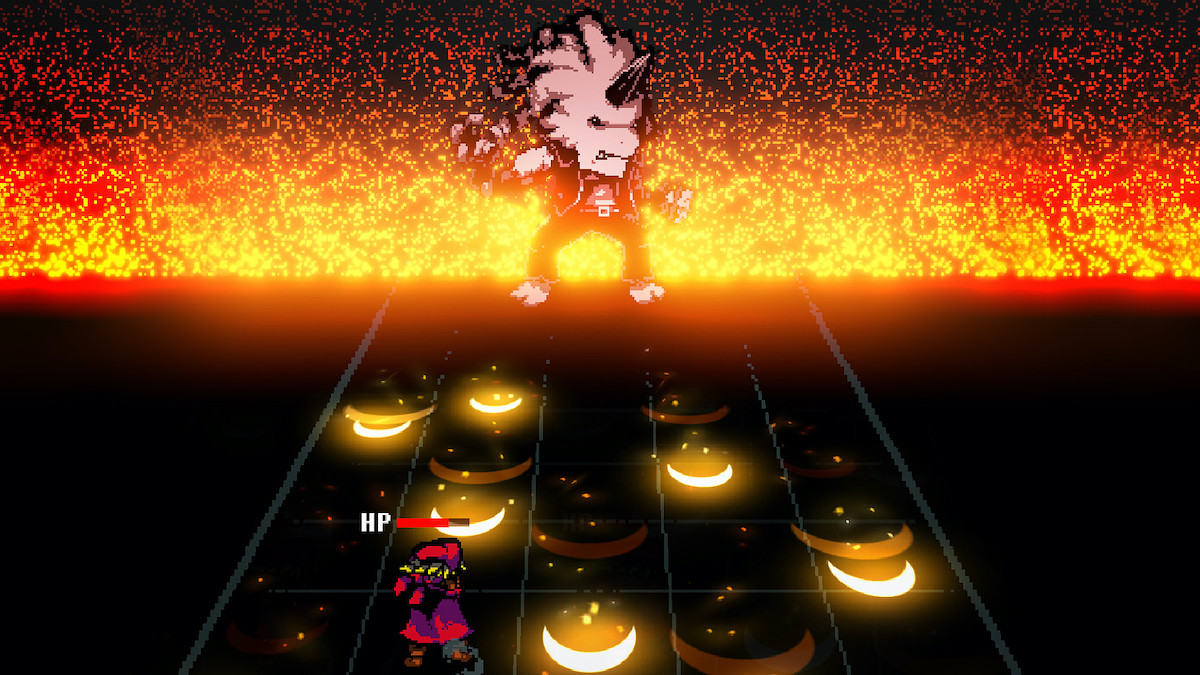 For all its praise and how much Everhood gets right on the basis of gameplay delivery, this is a game that understands precisely the raw, unhinged power of music. How the right assembly of beats, chords and motif changes can feel both intoxicating and transcendent. It’s something you wouldn’t expect playing through a large part of Everhood‘s progression. Taking on the role of a mute, doll-like character referred to as Red, you’re tasked with taking back your missing arm after its stolen from you. The game may offer subtle hints and indicators even before the critical half-way point — whereby it does that novel thing of mildly fooling you with a fake credits screen — that something else may be at play here, but it’s a reveal Everhood holds close to its chest. Even if this does run the risk of players bowing out through fear of such simplicity (and evident imitation, not least in its menus/UI/font usage), it does give room for the other areas — its writing, delivery and humorous off-beat demeanor — to deliver on their own, respective moments of charm. But it’s the gameplay and more importantly Everhood‘s prime pitch where a lot of that current (and as much eventual) distilling of genius stems from.

Hard as it is to properly define Everhood by genre without forgetting to include some necessary caveats, perhaps the easiest way to explain what takes place is to picture a game like Guitar Hero. The fret of a guitar, if you will, extending into the horizon; your character Red standing in the foreground, back-turned. Another character — of whom you engage either through confrontation, disagreement or out of necessity to require a key quest-relevant item — in the background that begins to dish out waves of similarly, multi-colored tabs like notes on a sheet. Unlike Guitar Hero, though, the trick here is to avoid the incoming salvo by shifting between one of the five lanes present. Jumping over smaller tabs, avoiding those with walls attached (making jumping impossible), quickly shifting left and right when more than one lane looks blocked. It’s a simple-enough premise whose twitchy, response-focused engagement is enjoyable enough due to how complex or tricky later encounters do thankfully get. What gives each of these encounters that extra flair and level of intrigue is the way Everhood combines audio and visuals to make each task special in its own way. 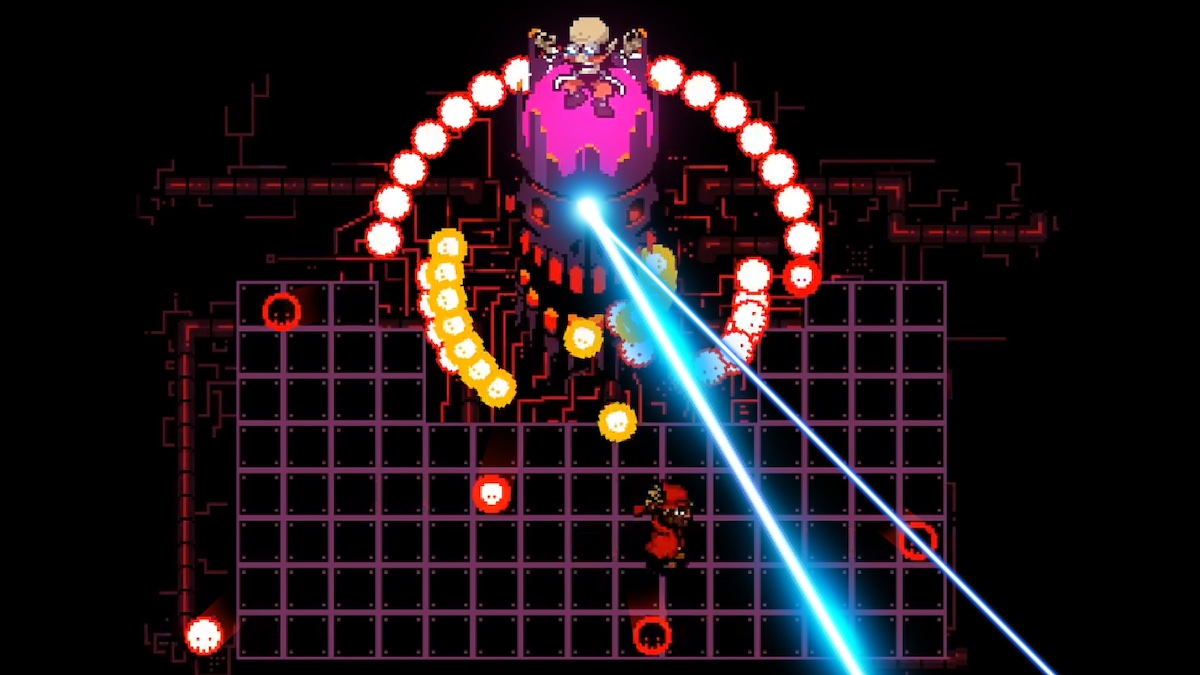 And not just because the music brilliantly varies from acoustic twang’s of guitar/bass strings, to uplifting trance, to hard-hitting electronic beats. All the way to screeching electro-rock in all its distorted riffs that make good use of restricting certain lanes/channels at points. But it’s also with its visuals, the dynamic between the spectrum of shapes surrounding you and the [mostly] empty void of black that are your surroundings. Each encounter not only feels tailored for the musical genre it’s enlisting, but personal to the character you’re heading up against. No doubt an intentional and implied move, given what comes later in the game. Beyond that though, Everhood still finds time to play with its formula, even if such moments are mostly for the sole purpose of providing respite mini-games. A game of console tennis with a fellow NPC is retrofitted to such a setting. A mine-cart segment has you frantically hitting corresponding switches on either side whilst still avoiding musical obstacles. There’s even a racing mini-game whose victory fanfare positively-reeks of the most upbeat Mario Kart results screen.

Clearly Everhood is not only smart with its mechanics, it’s confident too that there’s plenty of room left for evolution. Or in the game’s case, distortion. And my word, does the game use such a terminology literally in certain parts. Finding that perfect balance between deceiving and ruining a player’s focus. The very screen itself, in some encounters warping, rotating, bending. Zooming in, zooming out; limiting visibility, increasing it beyond suitable limits. Unloading filter after filter as if someone’s blasted it with one too many Photoshop effects. On the surface, but it’s a surreal-if-imaginative flexing of possibilities that Everhood takes players on. Another height with which that eventual relief of having survived the ordeal reaches as players continue to make their way on what still — despite such creative gameplay liberties — comes across as a straightforward (and maybe a touch too undercooked) adventure in a reality so evidently not of our own. In all the many doors and gateways and realms your character is clearly passing through. 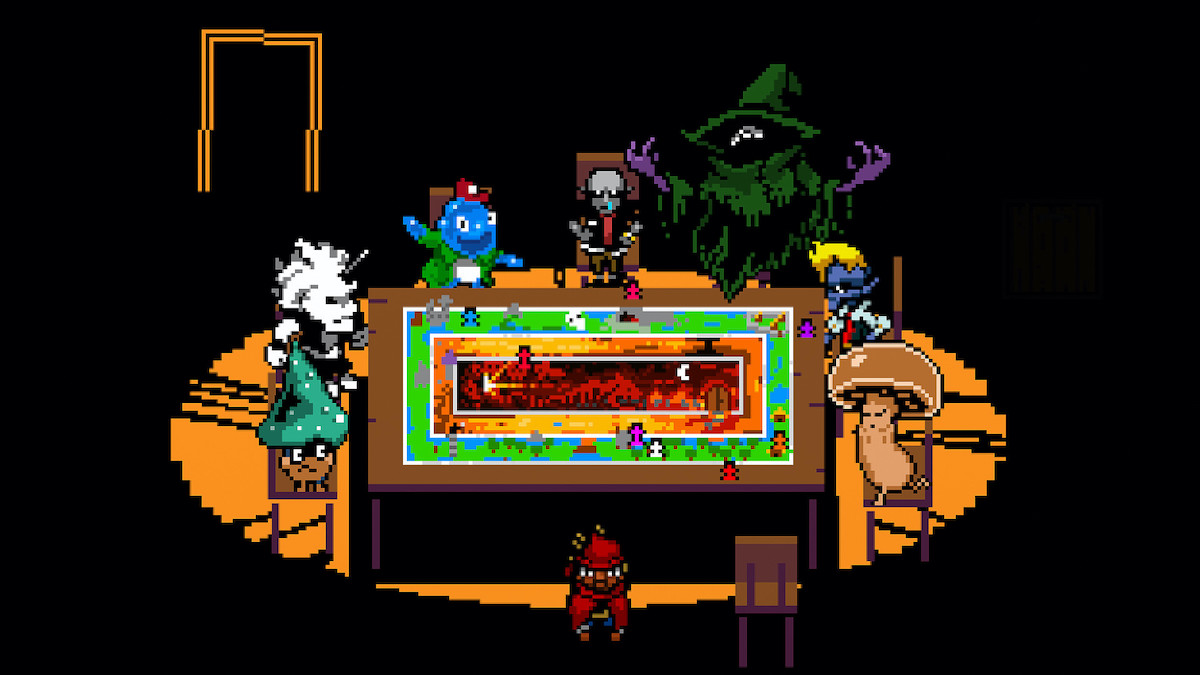 But then the second-half comes into play and conventions built up and standardized to that point are flipped on their head. Contradictory it may sound for a review not to go into detail over such key events, you’ll have to trust me on this one — what Everhood does with its gameplay during its latter half not only fundamentally changes how each encounter plays out on a visual level, it also evolves the mechanics underpinning it wonderfully in a way where offense and defense are so intertwined, failing in one is sure to doom the other. It’s here where the story — and so too its true themes — begin to slowly reveal themselves. Better still, via its changing objective, it pulls the trick of suggesting what you can do, but never stating if you should. That perhaps, it’s not the only means to achieve an ending, of which there are multiple in Everhood and whose progression is more down to what the player reads of the situation unfolding, spoken and unspoken alike. Right up to its most dramatic points that, amazingly, feel equal parts nihilistic, optimistic, hauntingly-devoid and uplifting in such a short span of time.

It goes without saying that the second half of Everhood is a sheer tour-de-force of ever-evolving mechanics and player-led deduction (and subsequent consequence). Previous areas in the game you revisit, uncovering minor new additions along the way, dressed with as much that familiar slapstick comedy, only now garnished with a touch more of a dark edge. That aforementioned game of console tennis, you have the option of playing on your own — the game over after you strike the ball once, the accompanying fanfare contorted into a slightly-unsettling variant. What’s more, an even grander audio-visual delivery that, as noted — similarly far from phased by such an admittance — that has the potential to bring you to tears. Not in its writing or its revelations (though the game does get surprisingly more melancholic in its final act), but simply through how Everhood nails the treatment of music as an extension, let alone an accompaniment, to the visuals on show. The methods the game incorporates to intensify such moments of desperation, confusion and delight. How the final “act” — of which it feels as if there’s at least three “final” acts on show here — works as both an accumulation of not just everything great Everhood has accomplished, but what you the player have accomplished. And it’s that optimism, that subtext of battling on, that truly hits home. In so tremendous a fashion. 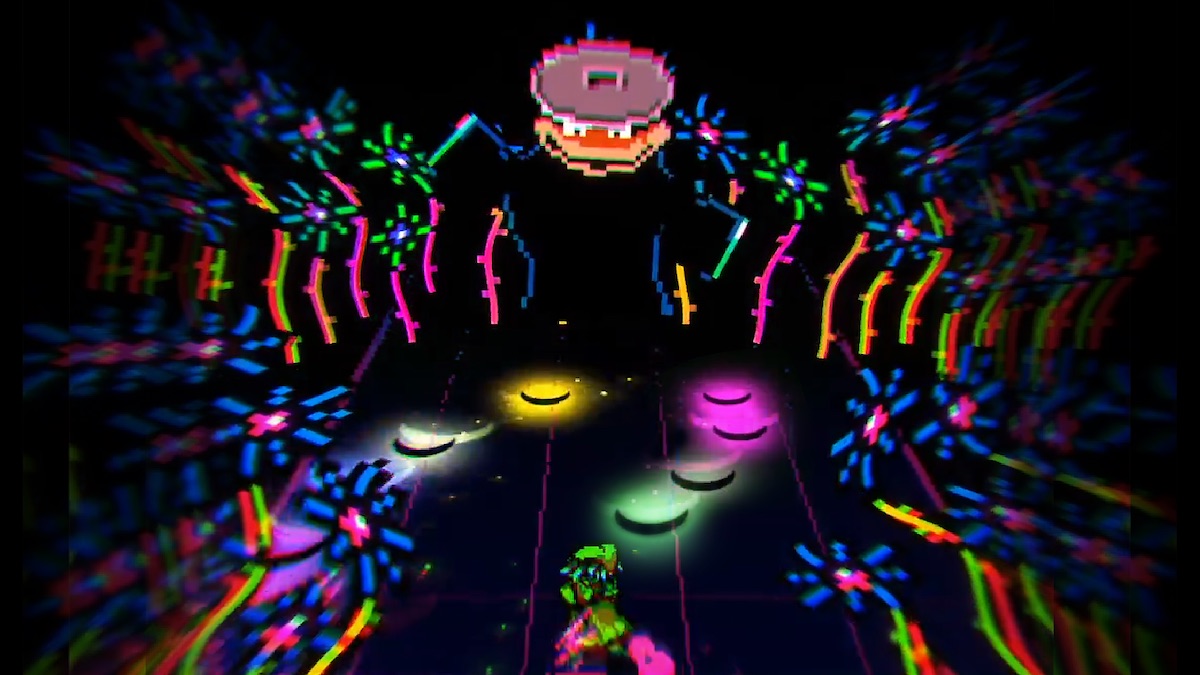 There’s no doubting the similarities and equally-familiar ground Everhood is treading here and of its intentions to pull the rug from out the player’s feet. But that doesn’t sour or take away from what Foreign Gnomes have not only crafted with original flair, but been able to illicit through its visuals and most importantly its incredible music. It’s a hallmark of any outstanding game that in another scenario, riding the crest of its addictively well-crafted gameplay alone, would be enough to consider praise-worthy. It’s what the game does thereafter — both skirting the edges of its five lane-styled, rhythm-focused antics, as much delving straight into how all this functions and plays out — that truly gives Everhood a level of euphoria and utter amazement at the ideas and themes it professes. See through the first half (maybe find yourself led astray) and what you’ll find is a game, much like that very release some six years previous it’s hoping to evoke, built of both head and heart alike. Do not under any circumstances give this one a miss: Everhood is likely to be one of the most surprising, smart and moving games to surface in 2021.