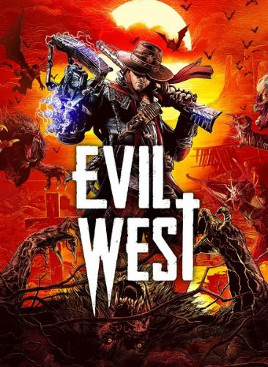 The weird west isn’t one of the most common game settings. It’s a catch all term for stories that use a setting that a hybrid of the traditional cowboy infested wild west and some other genre that’s usually unrelated, such as horror or science fiction. While this setting isn’t a regular occurrence, the untamed lawlessness in many westerns lends itself nicely to the inclusion of such horrors. Evil West is well aware of the crossover potential and how the barren badlands would be a perfect setting to unleash nightmarish terror to the test mettle of even the most rugged cowboys.

The player steps into the boots of Jesse Rentier. Jesse comes from a long line of monster hunters. In fact his family founded the Rentier Institute, a secret organization that works tirelessly to eradicate the vampiric threat from the United States. But this institute is not just wooden stakes and garlic. It relies on scientific research to gain an understanding of the world of vampires, learning about the different species and how they come into being. With this knowledge they are able to develop cutting edge technology to rid of the world of these blood-sucking freaks.

Evil West takes place an a steampunk version of the old west. Common western styles and weaponry are present, but in this alternate history technology is a more advanced than what the textbooks would say about the era. Airships are seen in a couple occasions and electricity plays a greater role in battle. Jesse’s most notable weapon is his gauntlet which is one of the more notable weapons developed by the Rentier Institute. This lightning-fueled piece of equipment not only grants Jesse super human punching power, but can also electrocute and stun his enemies. The harnessing of electricity isn’t just for zapping the vampires into piles of ashes as it’s also used to break through the Glamour, the veil the vampires cast over their dwelling to prevent their prey (aka: us) from ever knowing where they hide. The environments for human society is only part of the world; seeing how the vampires manufacture their blood supply was truly a sight to behold. 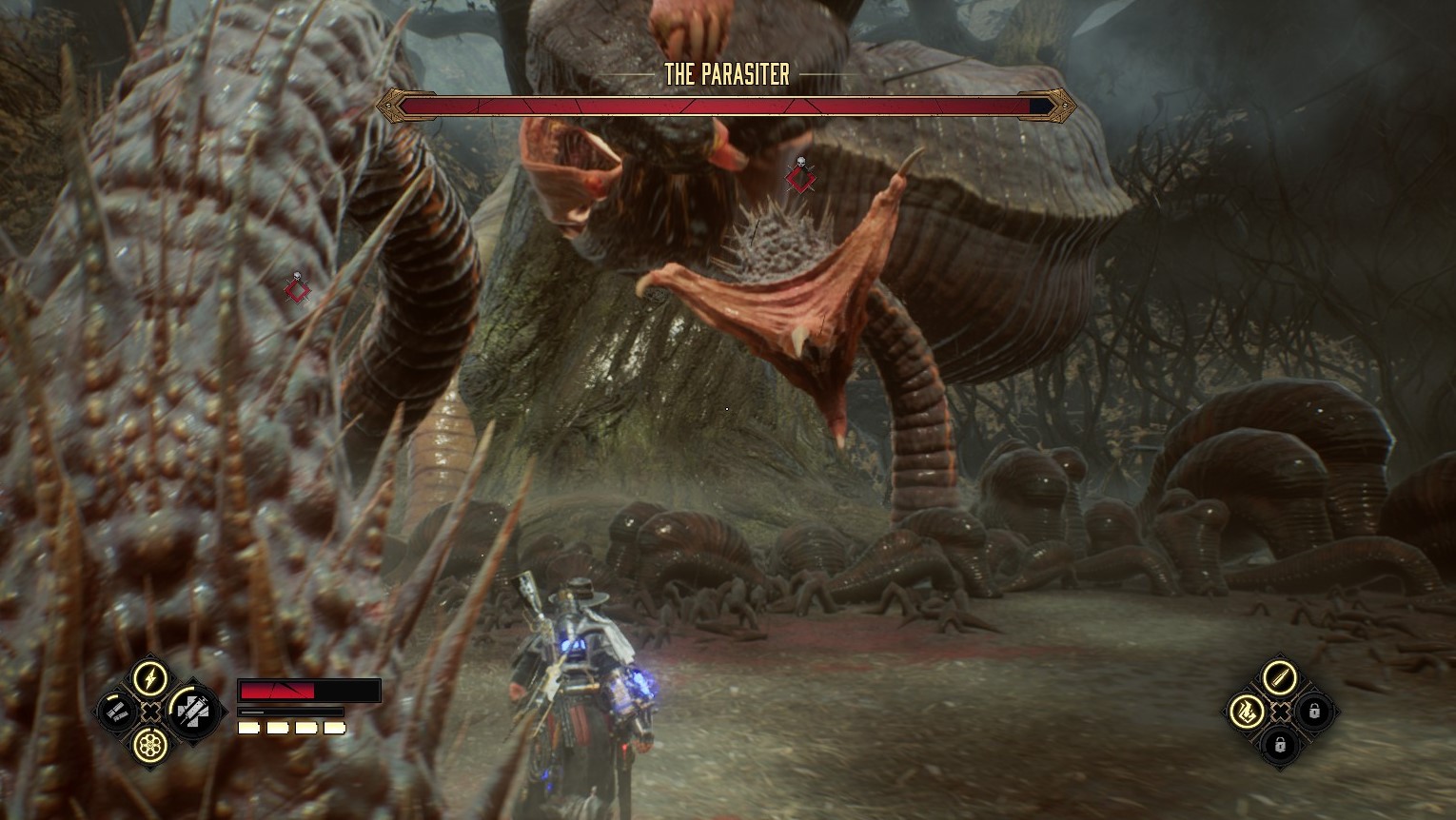 Story development and exposition play an important role in Evil West, but the developers know first and foremost this is an action game. The cutscenes are informative and entertaining, but get to the point quickly enough where the break in the action never feels prolonged. Progression occurs through such scenes at key points in missions and in between them there’s usually some time spent in a town that serves as a hub. Most of the game is progressing the areas where the vampires, commonly referred to as ticks, are out in full force. Progression follows a straight forward format of completing mission objectives, returning to town all while upgrading equipment and abilities with light RPG perk points and weapons upgrades.

In an age where open world gaming appears to be almost mandatory, it’s surprising that Evil West is broken up into distinct stages. These stages follow a linear progression with sixteen missions in total. There are some paths and hidden areas that take Jesse off the main path, but none of these stray too far from the objective. There are unique perks and weapon blueprints often hiding in plain sight along with money that can be used to upgrade his equipment, but there aren’t an assortment of collectibles that are often seen in other games. While being a fan of open-world gaming, this direction back to a simpler progression is refreshing as it feels like a return to the format that was popular a few console generations ago. There’s enough variety in environmental designs to help the different levels feel unique, whether it be snow-covered mountains, arachnid-infested jungles or abandoned towns. 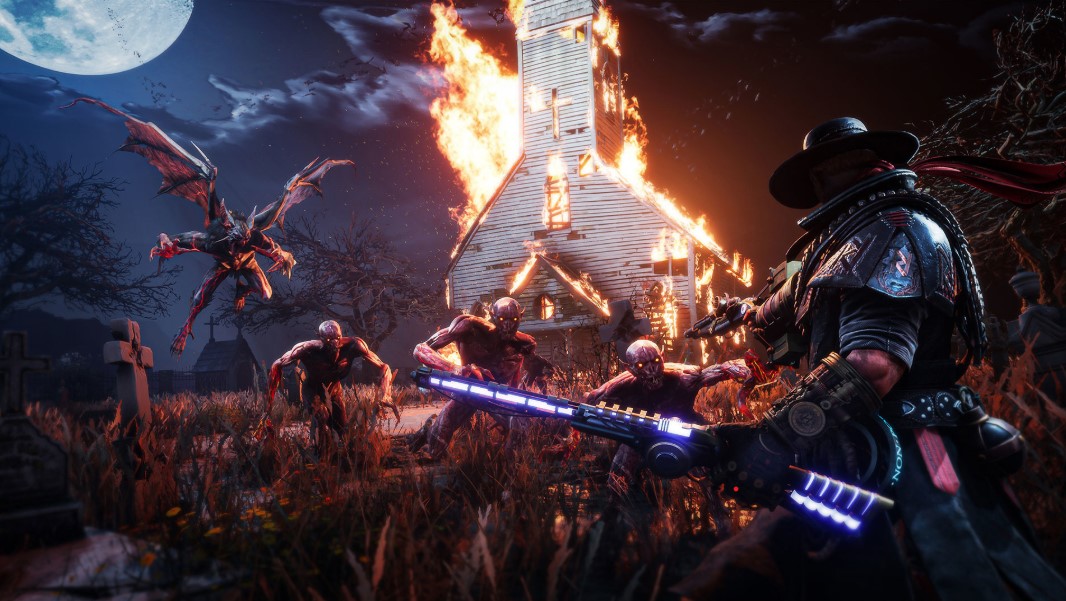 Evil West does a fantastic job of carving out its own identity through its gameplay mechanics and world building, but that doesn’t prevent the player to draw parallels to other games. The combat feels as though it draws inspiration from the God of War and Batman Arkham games. Jesse’s melee combat prowess is augmented by gauntlet which makes him feel unstoppable in battle. His vampiric assailants can be launched into the air with powerful uppercuts and thrown into spike traps or dynamite stacks. Potentially devasting attacks can be swiftly interrupted with a powerful kick to the chest while airborne pests can be drawn in with an electric rope. Jesse’s arsenal includes several weapons including a flamethrower, crossbow and shotgun, all of which are instantly accessible in the height of battle through an efficient approach to button mapping, eliminating the need to pause to fiddle around an inventory menu. The overall atmosphere as Jesse explores the untamed frontier harkens to the gothic-tinged intermingling of Red Dead Redemption with The Last of Us.

Jesse can become a more formidable force against the ticks through the use of perk points and money. Perks points are acquired when Jesse gains a level and these can be used to augment or unlock different abilities. Jesse can also upgrade his equipment by spending money to make improvements. Some special upgrades require him to find certain items like gun blueprints but an example of what those can do is add extra ammunition to a magazine or give his firearms electrical chain reaction properties. To help add realism to a game about cowboys killing vampires, Jesse’s assorted weaponry is visible on his person, which changes the appearance of his character model as his arsenal grows. 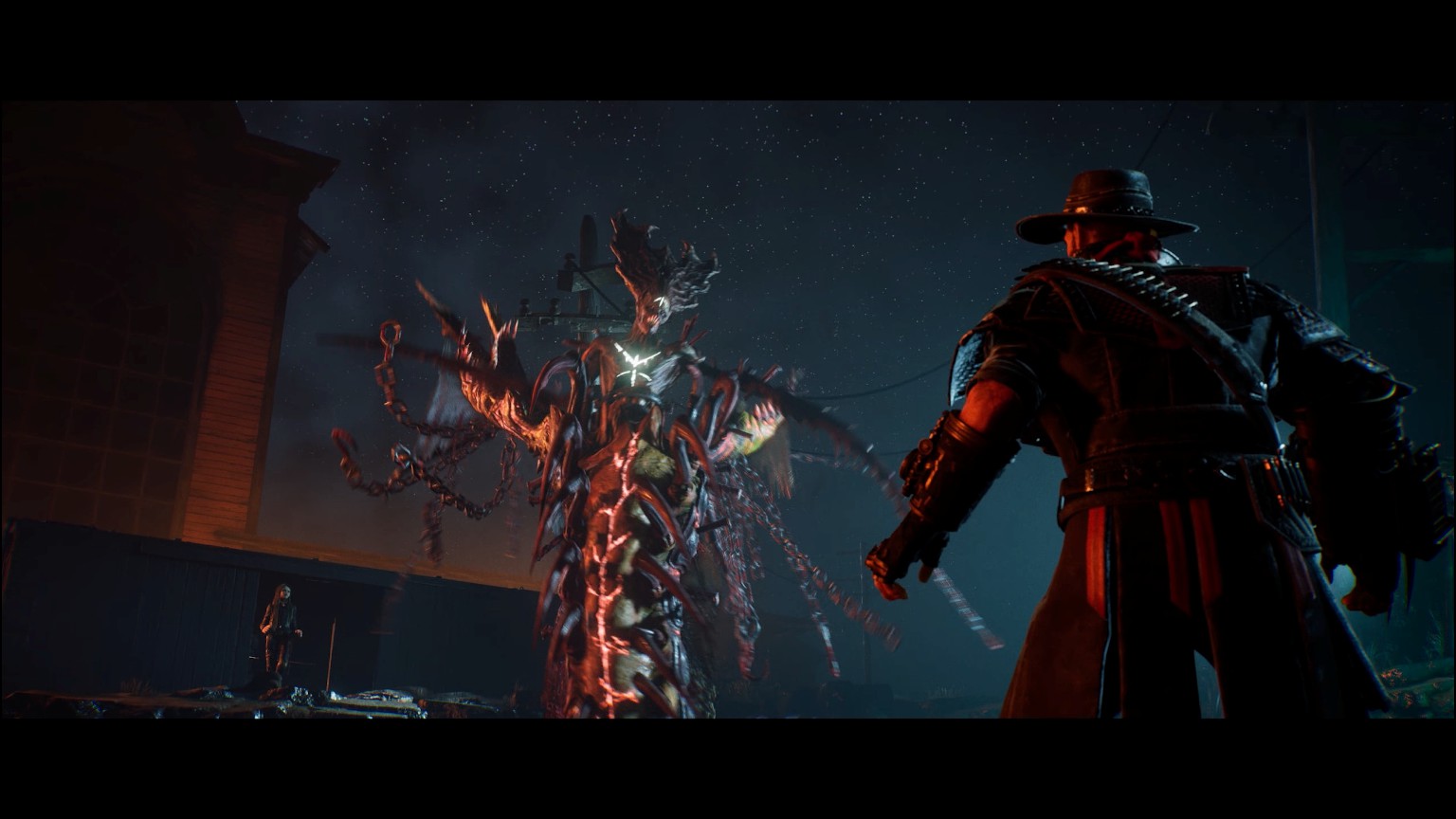 There’s a few nods to other vampiric works sprinkled throughout Evil West; the name of a particular town got a chuckle given my fondness for the particular series of vampire hunting media it referenced. But these references only enhance what is a great game on its own merits. The melding of familiar elements with classic horror and the wild west is done so in a way where the world of Evil West is familiar enough to appeal to fans of those genres, but creates its own unique world that was a blast to explore even if exploration was limited by closed-world gameplay. The story is interesting enough to keep players engaged, but doled out in small enough doses where it never hurts the pacing. The format of the mission is typically split up into progressing through a path until Jesse entered an arena where a frenetic brawl against the various vampires and werewolves would ensue. It’s formulaic and repetitive, but the fun factor made up for it along with the occasional puzzle or runaway cart ride. It takes around ten to fifteen hours to complete Evil West, and while that seems like the perfect length for a game of this nature, it’s a nightmare from which I didn’t want to wake.

The technical quality of the graphics helps bring the nightmarish world of Evil West to life. The environments are gorgeous to behold with impressive attention to detail like paths being made in the snow when Jesse walked through it. Other environments are infested with giant spiders which is less pleasant to behold, but for true arachnophobes there’s an option to turn off spiders. The music out in the frontier was atmospheric and tense to held create a sense of dread while upbeat piano music made things seem happier in the bar. The game mechanics contribute the feeling of being unstoppable where Jesse can quickly dodge across the arenas to avoid deadly attacks while effortlessly attacking with all his assorted weapons. 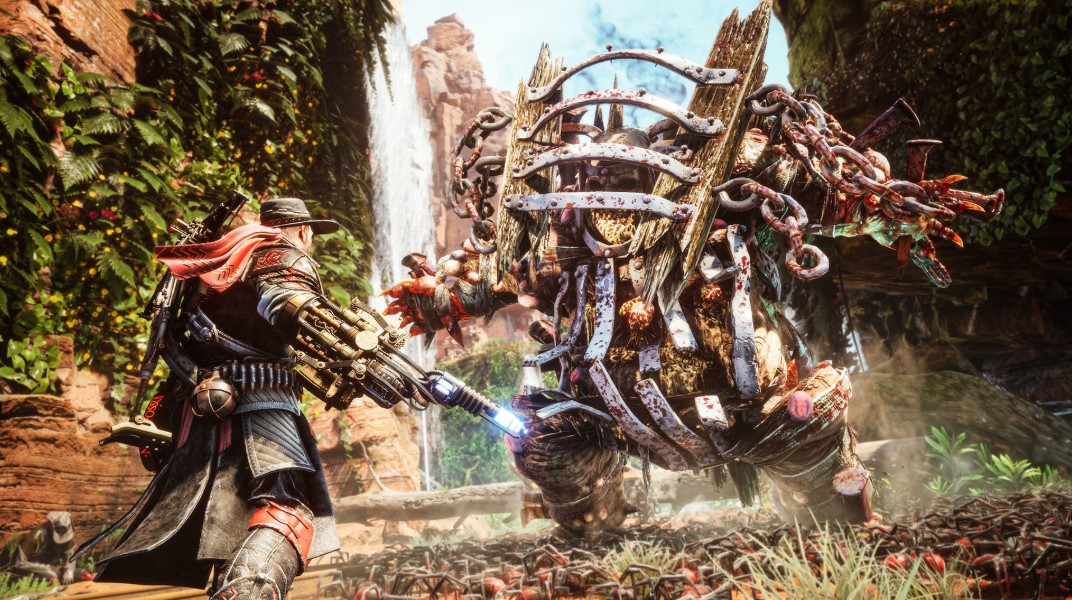 Evil West deserves a spot among the best games that take place in the wild west. This isn’t the first time cowboys have faced off against vampires, but this is one the better attempts at fusing the opposing genres. From the time Evil West sinks in its teeth, it immediately becomes a game that’s difficult to put down. The story is told through cutscenes that are long enough to get the point across without affecting the pacing. The real star of Evil West is the combat where using the obscene amount of firearms strapped to Jesse’s back to supplement melee attacks couldn’t have felt more intuitive. Not everyone is a fan of westerns or horror, but anyone who’s a fan of either owes it to themselves to play Evil West.