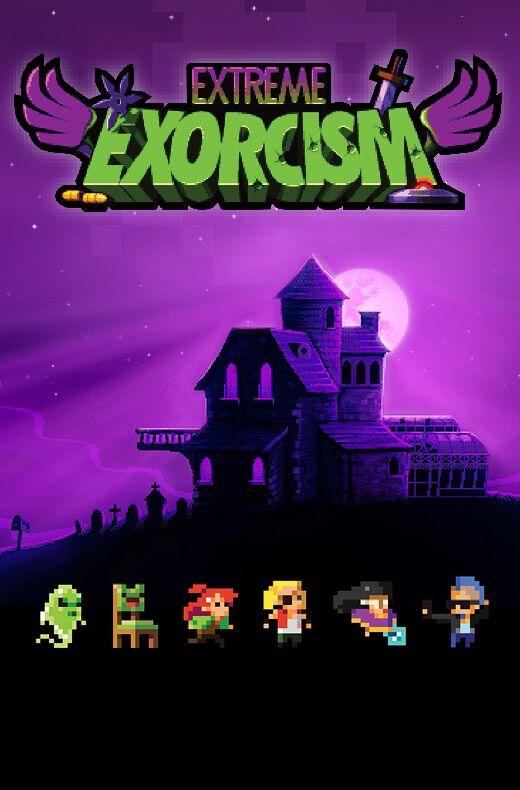 Let’s get the miniature elephant out of the room, shall we: Extreme Exorcism is a bad name for a video game. The good news here is that, as a small independent game, it doesn’t matter what its title is, especially when you consider the audience of this quirky single-room action platformer. Whoever winds up spending time shooting ghosts with ninja stars and bazookas isn’t going to be the type of causal gamer who looks at what a game is called before plopping down some cash. This will likely play out in developer Golden Ruby Games’ favor, though Extreme Exorcism seems to suffer from one major problem at the heart of its core hook. As fun as pixelated bullet-hell chaos can be in any game, Extreme Exorcism, at its foundation, rewards players for being lame. This isn’t a problem at first, but any sense of single-player longevity eventually goes out the window.

Extreme Exorcism is a charming pixel-art action platformer in which players fight off ghosts in single rooms (apologies to anyone who is a fan of scrolling) using a ton of ridiculous weapons. You’re equipped with the power to double jump and a room full of weapons, which you’re able to hold and shoot three of at a time. The standard arcade mode, which most lone wolfs will find themselves playing the most of, hosts a round-based, score-based arena of destruction where players attempt to fight off ghosts in hopes of killing the one enemy with a crown. This may seem like pretty standard fare, considering this is a modern version of an age-old platforming genre, but Extreme Exorcism‘s biggest twist finds players fighting off previous versions of themselves. In a nutshell, every round’s Crown Ghost mimics the exact player behavior from the previous round, projectiles and all.

This is an interesting idea in theory, but the biggest issue here is that fun and success lie on opposite ends of the strategy spectrum. If you’re looking to have the most fun possible, then you’ll probably find yourself shooting like an absolute lunatic at every moment. The problem here is that chaotic players won’t always be able to pass the threshold required to unlock more rooms in this Halloween-esque haunted mansion. Obviously, this means that if you’re looking to progress, you’ll need to plan out your moves ahead of time so that the future versions of yourself are easier to defeat. 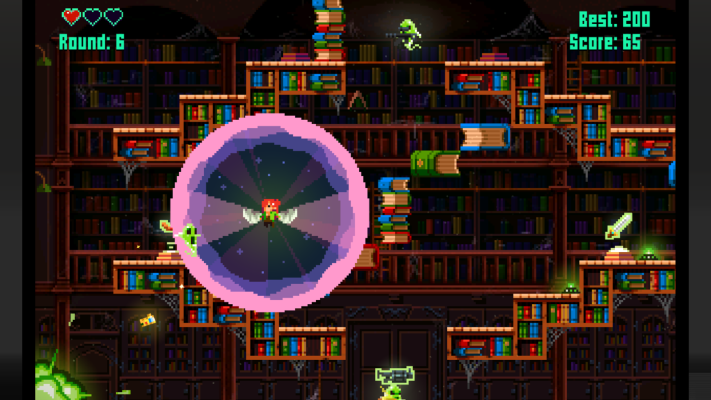 At first, this is oddly satisfying, as you’ll be able to tell how successful you’re going to be before anything ever happens. However, once you realize that you’re being more tame and conservative in order to beat what amounts to a campaign, awkward dissonance follows shortly after. Trying to beat a game always carries a sense of motivation, but when that motivation comes at the expense of joy, the result is an experience that turns into a bit of a chore once its novelty wears off.

It isn’t like Extreme Exorcism is a bad game by any means. Its mechanics and physics feel great and it has perhaps the best double jump of any game this year outside of Ori and the Blind Forest. A well-constructed polished experience, Extreme Exorcism‘s only real interface issue is its lack of a restart button despite the fact that there are numerous unmapped inputs on controllers. Still, when a game is designed to capitalize on novelty, there will inevitably be a day where that novelty wears off. Sadly for Extreme Exorcism, this novelty wears off fairly quickly in Arcade mode, and this finds a way to carry over to both Challenge and Deathmatch. Games like Nuclear Throne and Broforce are exciting titles, even in their current Early Access forms, because as things get more and more insane, players are able to embrace the chaos. When you know an enemy’s movements ahead of time, rather than reacting to situations presented to you, this gives you the chance to make things easier for yourself. Extreme Exorcism seems to forget that pushing past your gameplay comfort zone makes for an amazing experience; instead, it’s a game that actively encourages players to avoid chaos and excitement in favor of progression. 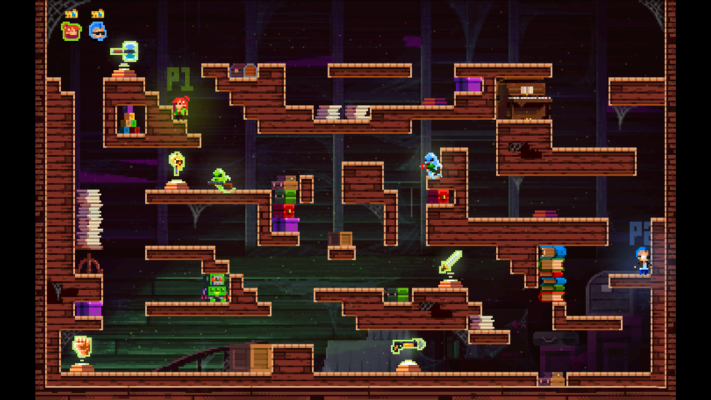 While Arcade mode gives players the chance to unlock levels in new environments, including a Library with sprites that alter the level layout (these are easily the best levels available), players will likely find themselves tired from what amounts to the same gameplay in rooms that simply feel like the result of tile-swapping rather than innovative design. Thankfully, Challenge mode finds a way to squeeze a bit more life and enjoyment out of Extreme Exorcism. This is a title that needs gameplay variance more than anything else, so being able to fight ghosts that constantly throw harpoons or having to survive an onslaught of chairs adds a bit of unpredictability to a game whose foundation is built upon the very definition of predictability. While the sheer amount of challenges, which are gated in tiers behind level progression, is a bit excessive, it’s nice to see a fair amount of content that switches things up dramatically.

Deathmatch, Extreme Exorcism‘s local multiplayer mode, borrows a fair amount of inspiration from titles like Towerfall and Starwhal. Players have to survive the onslaught of other players in round-based battles, with the winner of each round receiving a trademark ghost. While this can be exciting and insane, which makes for a great party game, everything seems to fall apart the second one player tries to be conservative. By camping out with a powerful weapon, it’s easy to beat other players considering every attack is a one-shot kill. If you’re going to boot up Extreme Exorcism at a gathering with friends, be prepared to break out another local multiplayer game the second that awful friend of yours realizes the easiest way to succeed here. 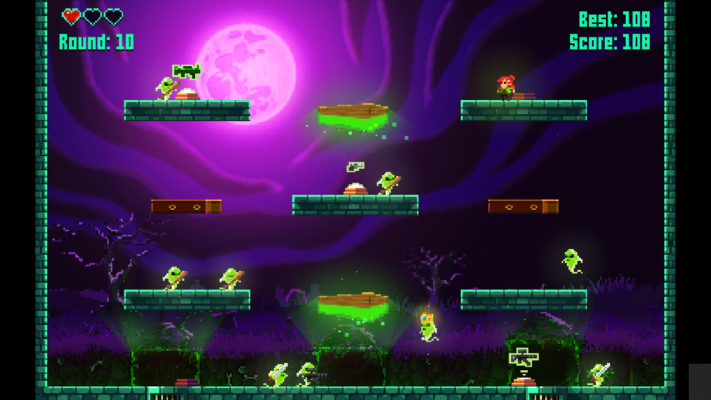 The effort that Golden Ruby Games put forth is admirable, as the amount of playable content present shows the power of good game development. After all, this a game with a relatively shallow premise and a genre that will, by definition, restrict what players are able to do. Still, while Extreme Exorcism contains a fair amount of excitement in its opening minutes, that novelty eventually wears off quicker than you’d hope for. If you’re the type of player that hopes to complete every game you boot up, it’s not hard to see you placing Extreme Exorcism on the back-burner after an hour or two. As charming and as neat of an idea as playing past-versions of yourself is, there are simply not enough legs to the core hook here and that dooms the final product to mediocrity right from the start.