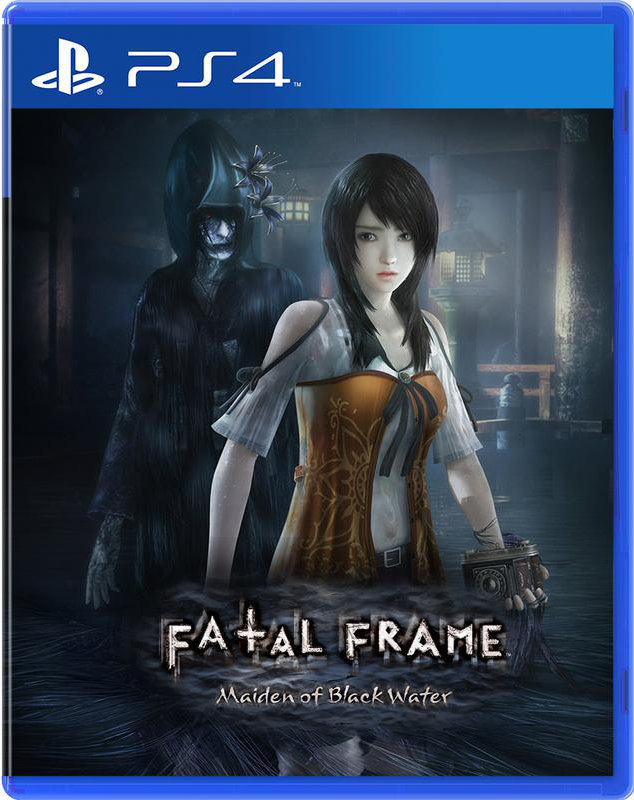 The Fatal Frame series has been on something of a hiatus these past several years, its last entry being the original release of Fatal Frame: Maiden of Black Water on the Wii U. That system’s sales being what they were, few horror fans had the chance to try this last entry out. So it’s somewhat fitting that the series is making its return via a proper port to PC and the rest of the eighth console generation’s member systems. At the time, criticism held that Fatal Frame: Maiden of Black Water was a somewhat middling entry for the series, hitting the usual beats but offering little in terms of innovation. Is that still true of this version? Well, yes and no. There are indeed new features and extras here, and it all improves the overall experience to one degree or another, but it isn’t quite enough to overcome the inherent problems.

Fatal Frame: Maiden of Black Water tells the chilling tale of Mt. Hikami, a once-sacred place now given over almost entirely to darkness and death. Many legends surround the place, and the player can even learn about several over the course of the game. Its main story primarily revolves around three playable characters: Yuri Kozukata, Miu Hinasaki and Ren Hojo, with Yuri Kozukata serving as the de factor main character. Each of them is tied to Mt. Hikami’s tragic past in one way or another, and all three must confront that past or meet the same grisly end as so many others before them. There’s a certain air of inevitability woven throughout the story, and seeing whether or not these people can defy it is perhaps the strongest motivator for seeing the tale through to the end. Unfortunately, this happens to be where the first major issue crops up.

The situation and story are interesting but the characters, sadly, are not. It might be a symptom of a somewhat lifeless English dub, but just about everyone in Fatal Frame: Maiden of Black Water seems to live in a permanent daze. Regardless of who’s speaking, dialogue is almost always delivered in flat tones with little emotion to it. It’s somewhat forgivable in normal, matter-of-fact conversation, but rather jarring in situations where Yuri, Ren or Miu should be reacting to what’s going on around them. Instead, the most they ever seem to express is mild shock or dread; there’s little in the way of actual fear shown at all. 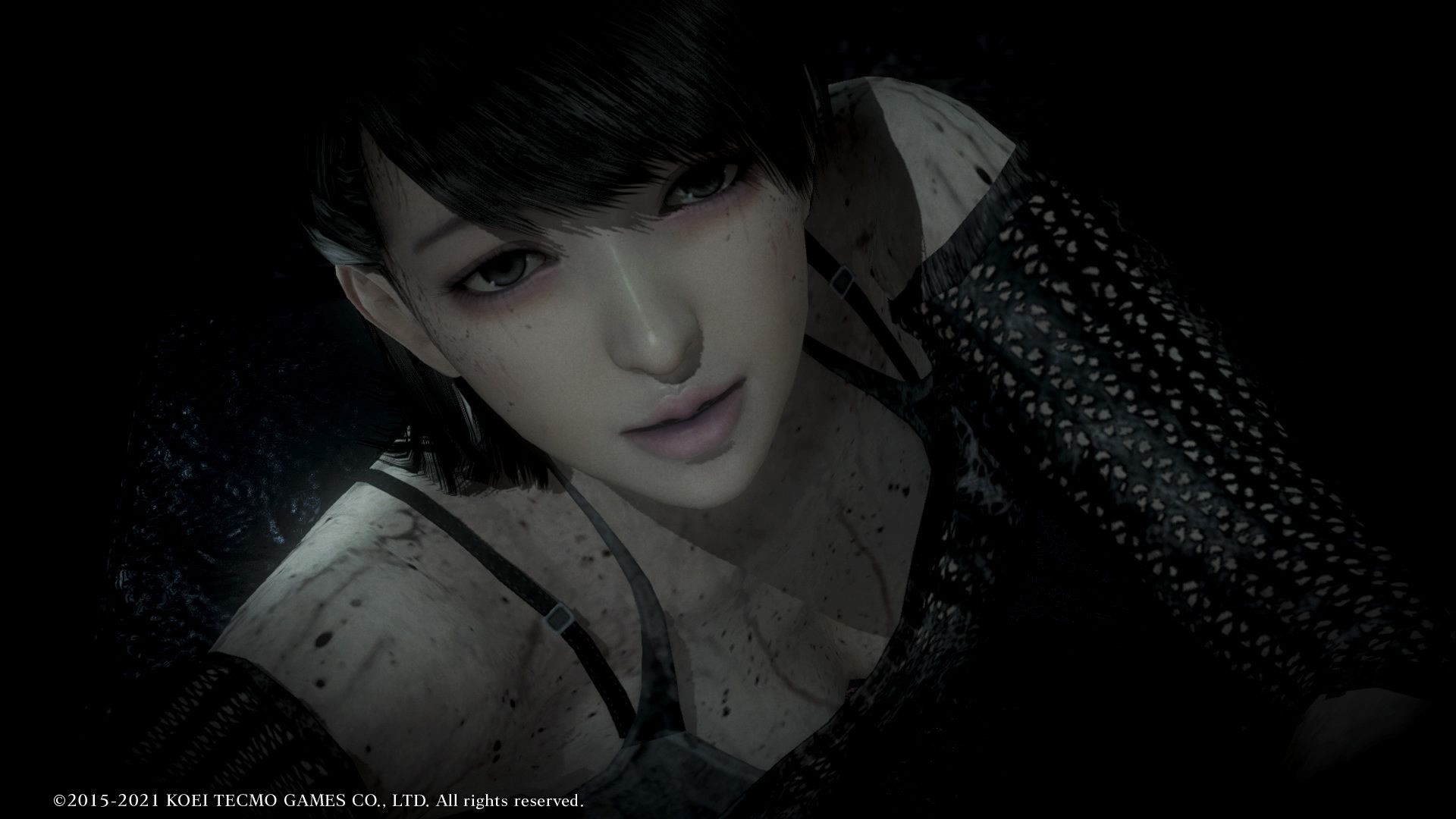 The animation doesn’t help this situation either, as once again, there’s hardly ever any visible emotion on anyone’s face. For a horror game that’s heavily reliant on its atmosphere, this is damaging as it constantly pulls one out of the experience. After all, it’s hard to feel scared when the characters seem utterly indifferent to what’s going on around them.

When the lacking animation and English voice acting isn’t undermining it though, Fatal Frame: Maiden of Black Water can manage to create an engrossing horror atmosphere. It can often be chilling in a way similar to Silent Hill, but with those aforementioned overtones of inevitability and quiet resignation. It’s as if each character is on the path to meeting their ultimate fate somewhere on Mt. Hikami, and the only real question is whether or not they’ll actually care enough to do something about it once they reach the end.

This is probably why there are few overt scares to be found here, and that’s probably a good call. This is a quiet, slow-burn kind tale that impacts its players in the way a spooky ghost story should: it’s disquieting rather than scary, leaving the player lingering on the tale afterwards. It’s a horror story, not a terror story like a Dead Space or a Resident Evil-style game. Of course, there’s such a thing as too slow and too quiet. 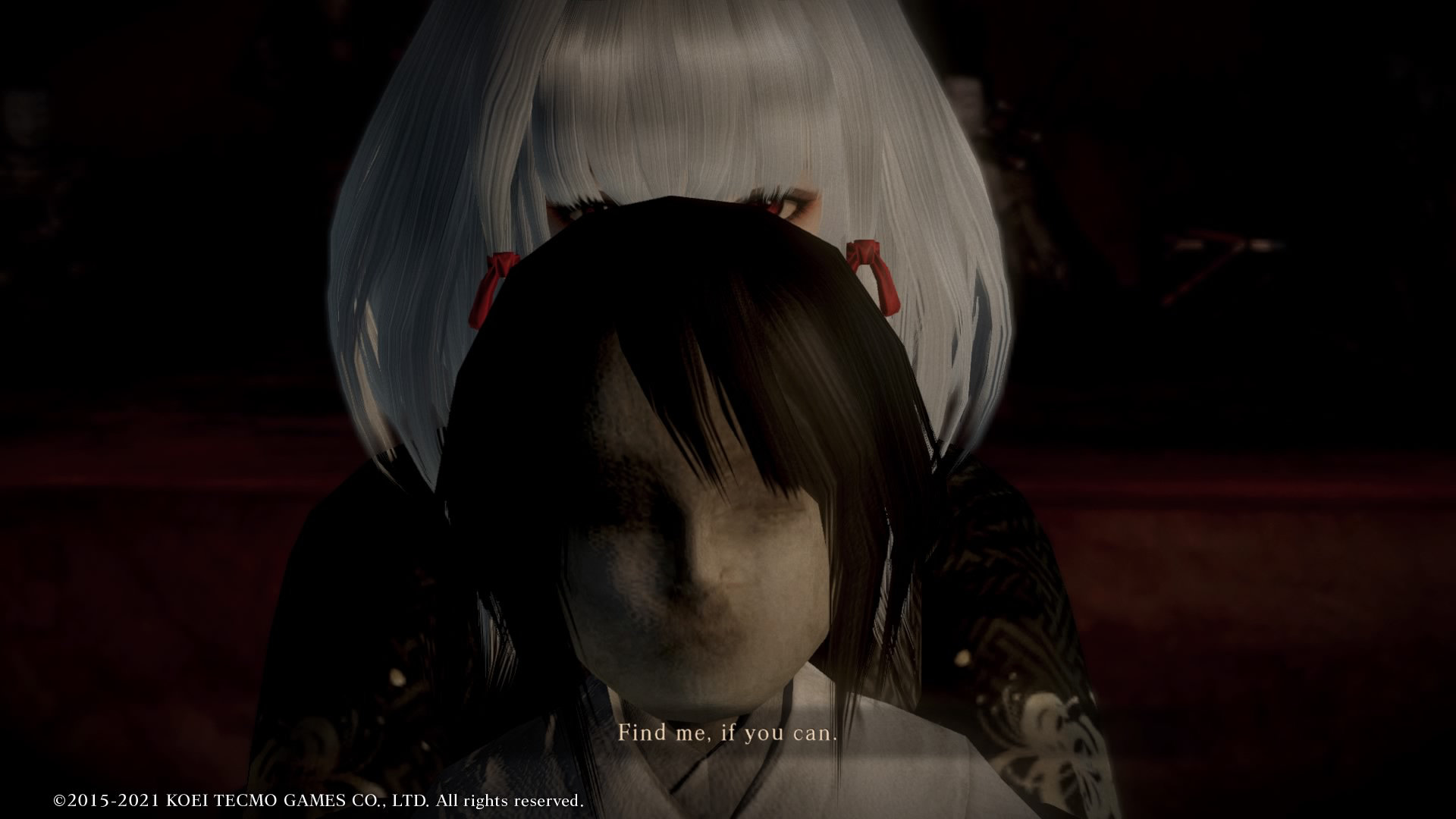 Aside from the voice-acting and animation, Fatal Frame: Maiden of Black Water’s biggest problem has to be its excruciatingly slow pace. Almost everything in this game takes up way too much time. Characters don’t walk but meander, taking slow. deliberate. steps. everywhere. they. go. There’s a “run” button, but it’s more like a light jog, and the character handles like a concrete slab while doing so. Want to pick up an item? Hold R2 and wait…as the animation…plays…out. This is for every item, by the way.

Sometimes a ghost hand will pop-out and grab at Yuri, Ren or Miu’s outstretched hand for a pointless jump-scare. It’d be fine on its own, but all it ends up doing is making the player repeat the slow-grabbing animation for no good reason. Fighting ghosts could be fun at least, but even a common spirit usually takes minutes to fully exorcise. The fights are almost never actually difficult (on normal), so they tend to overstay their welcome because of this. Oddly enough, it’s in these encounters where the characters’ awkwardness is the most appreciated, since it adds tension to the encounters.

Honestly if the ghosts hit harder and could be dispatched more quickly, this could be a fun combat system. Thanks to a rather well-executed blend of standard and motion controls, handling the Camera Obscura feels natural. General movement is handled via the thumb-sticks and framing through motion controls. The motion controls can be toggled-off in the menu if need be, but players will likely want to keep them on since they work so well. 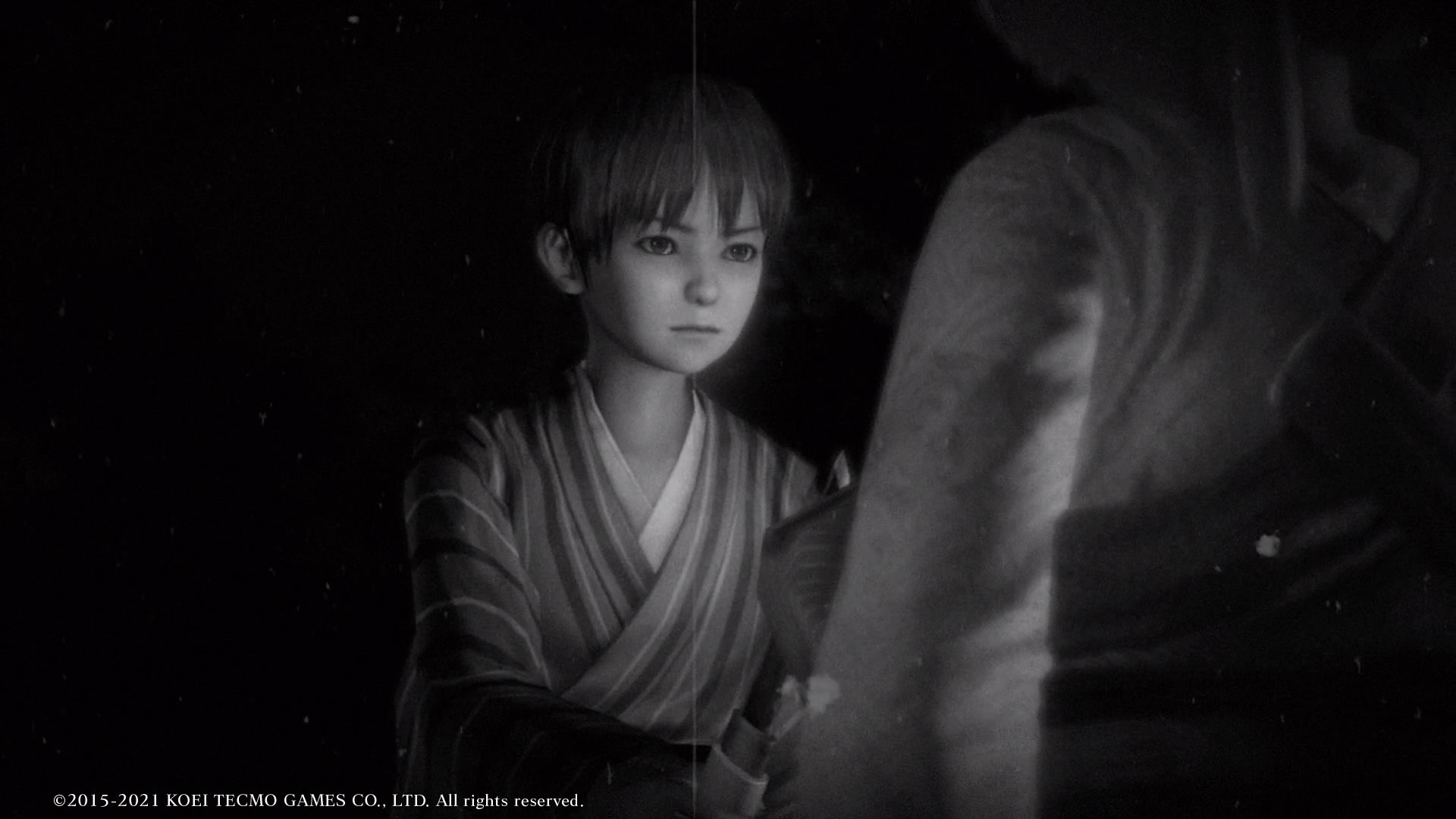 The mixed controls shine brightest while in the middle of trickier ghost encounters, those requiring the player to not only time their shots for damage and knockback, but also maneuvering and rotating the frame in order to keep the ghosts in view. It actually plays out as a sort of spatial puzzle that challenges the player in terms of both memorizing enemy behaviors and arranging them in frame for maximum effect. Unfortunately, Fatal Frame: Maiden of Black Water’s overall slowness hampers it just like it does everything else, and an overly general enemy/item of interest indicator doesn’t help matters either.

As for presentation, Fatal Frame: Maiden of Black Water is somewhat underwhelming. It does look better than the original Wii U iteration, but it otherwise looks like exactly what it is: an early eighth generation game. It’s not ugly; the muted colors, film grain and low framerate actually all well serve the story’s ghost story feel. It’s just that it still has more of a rough feeling than one would expect from a remaster. The new photo mode operates as well as one would expect at least. It’s easy to access, allows the player to fully customize the scene in terms of everything from character placements, to poses, to even facial expressions (what few are there).

There are also plenty of frames, filters and lighting effects to be applied. It’s everything that such a mode should be in a game that revolves around photography. Serving both this and normal gameplay is a decent collection of costumes and accessories for characters to wear. They’re all unlockable in-game, make for funny screenshots and can inject levity into the otherwise heavy atmosphere if that’s what one wants. Otherwise, they’re kind of just there, and perhaps that’s enough. 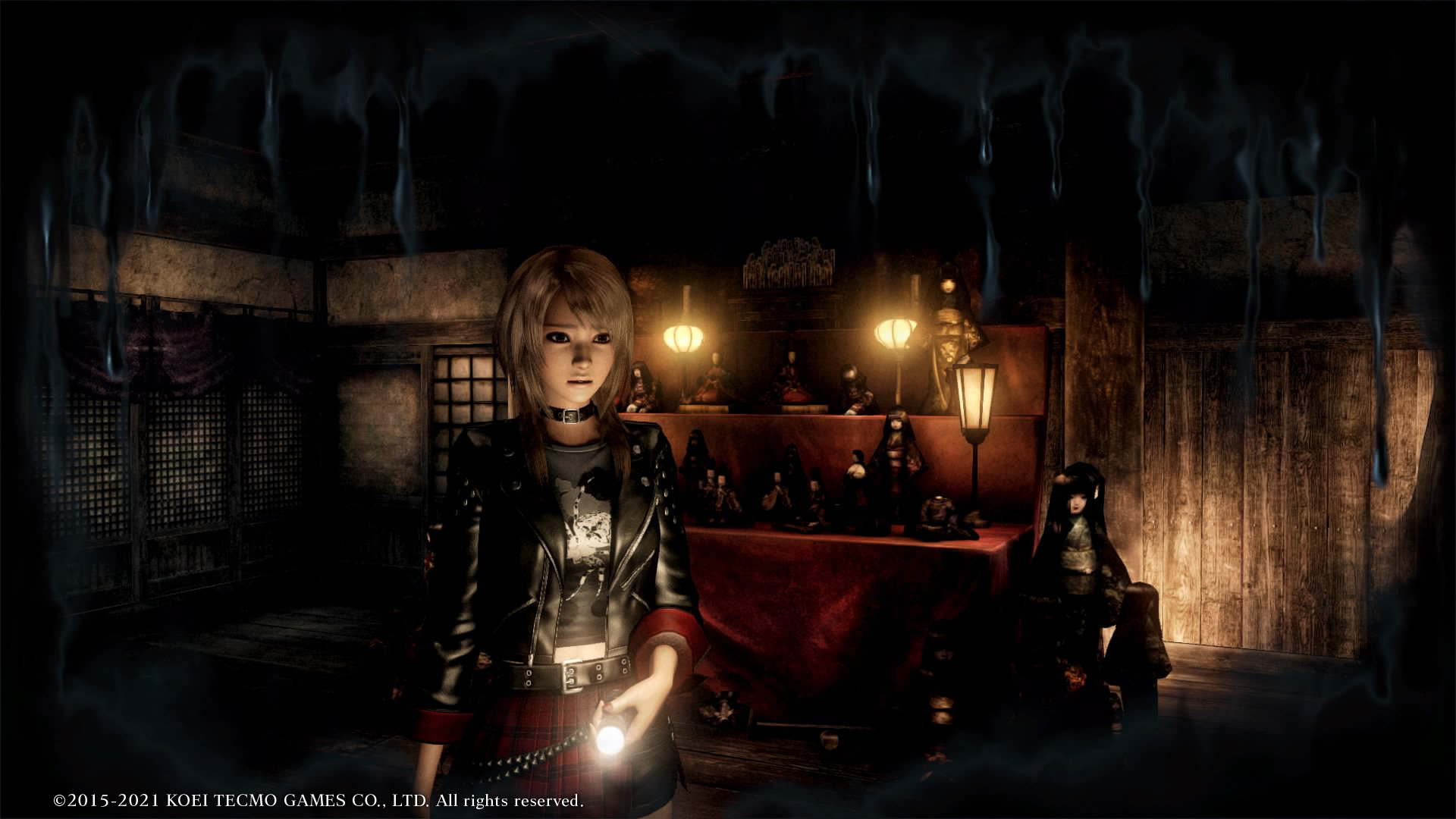 As should probably be expected of what’s basically a port of the Wii U version, this iteration of Fatal Frame: Maiden of Black Water offers a decidedly average horror experience. The story of Mt. Hikami and those tied to it is rather intriguing, and it is able to create a heavy, disquieting and even chilling atmosphere at times. The fundamentals of combat are strong too, but the entire experience is undermined by pervasive slowness and a not-so-great English dub. Fatal Frame fans will likely enjoy it regardless, as will those looking for a subtler horror game to play for Halloween. For everyone else, though, it might be better to either give Fatal Frame: Maiden of Black Water a pass or wait until it eventually goes on sale.