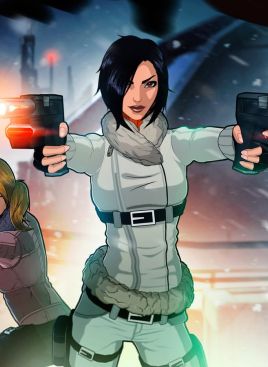 Released for the original PlayStation back in 2000, the original Fear Effect is a bit of an oddity. There are more than a few people whose immediate memories of it have survival horror spring to mind, but while it has similar gameplay elements and a plot involving the supernatural, a lot of the memories I have of it and its sequel are sneaking around guards in stealth sections, navigating enemy bases and getting into occasional gunplay. It was sort of like the middle ground between Resident Evil and Metal Gear Solid. Those may just be my own nostalgia goggles, of course, but damned if I didn’t get that feeling while playing Fear Effect Sedna, Square Enix and developer Sushee’s first attempt at revitalizing the franchise. It wasn’t perfect, mind you, but it did remind me how I’ve missed this series so much.

Set a few years after the good ending to the first game, Fear Effect Sedna sees our favorite mercenaries/same-sex partners Hana and Rain hired to steal a mysterious statuette, only to have it nicked first by some equally mysterious men. Eventually, our protagonists find their way to Greenland, gradually joined by fellow comrades Deke, Glas, and newcomer Axel (who Hana conveniently knows from previous experience). They soon find themselves tangled up in yet another insane scheme, this time involving the creation of monstrous beings designed to resemble those out of Inuit lore, and our heroes have to get to the bottom of things.

Now, if players were worried that the new shift to isometric gameplay meant a move away from the tone the series has laid down so far, then let me reassure them that there’s no need to panic. Fear Effect Sedna again perfectly balances out its elements of supernatural horror with more straightforward espionage and action gameplay, allowing you to enjoy the suspense found in both sneaking up on a whole room of guards and silently picking them off and also confronting a giant killer orca monster that just burst through the door. Speaking of which, the inclusion of Inuit mythology was an inspired move, crafting some clever monster designs around it and incorporating them into a bizarre mystery full of twists and turns that will definitely keep you captivated with each development. 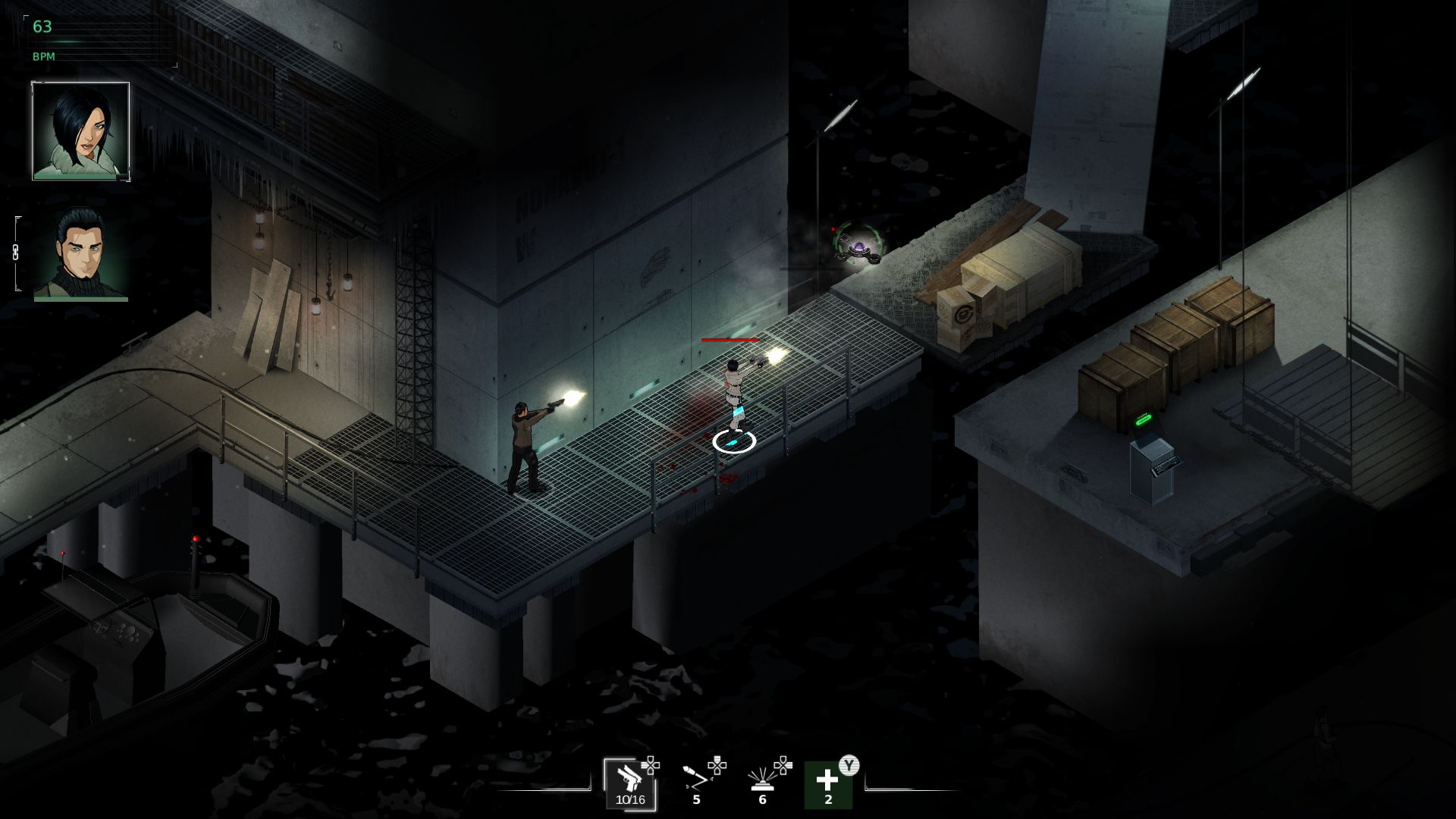 The classic cel-shaded graphics of the original are also recreated perfectly, providing the perfect bit of visual flair for the cutscenes, and playing up the comic book feel. The actual landscapes in-game are also nice and detailed, if a bit dark at times (a bit necessary for isometric titles like these, but still). The soundtrack is also superb, and the characters still remain likable, even if their performances aren’t one hundred percent perfect (Deke in particular has a few awkward moments).

In terms of gameplay, things are kept nice and simple. For stealth, you have enemies with clearly defined fields of vision to avoid, and an easy way to switch from standing to crouched stealth mode in order to sneak up on them and deliver a killing blow. Characters also each have three unique skills, ranging from Axel’s confusion gas to Deke’s flamethrower and Rain’s holographic decoys, to name a few, and you can switch between characters at any time when you have a squad. Puzzles are frequent and help break up the monotony, and for the most part, are quite well-designed (and have some fun death animations, at the very least). Areas also have a lot to explore, be it hunting for more medkits and special ammo, of totems that unlock bonus artwork, which is always welcome. 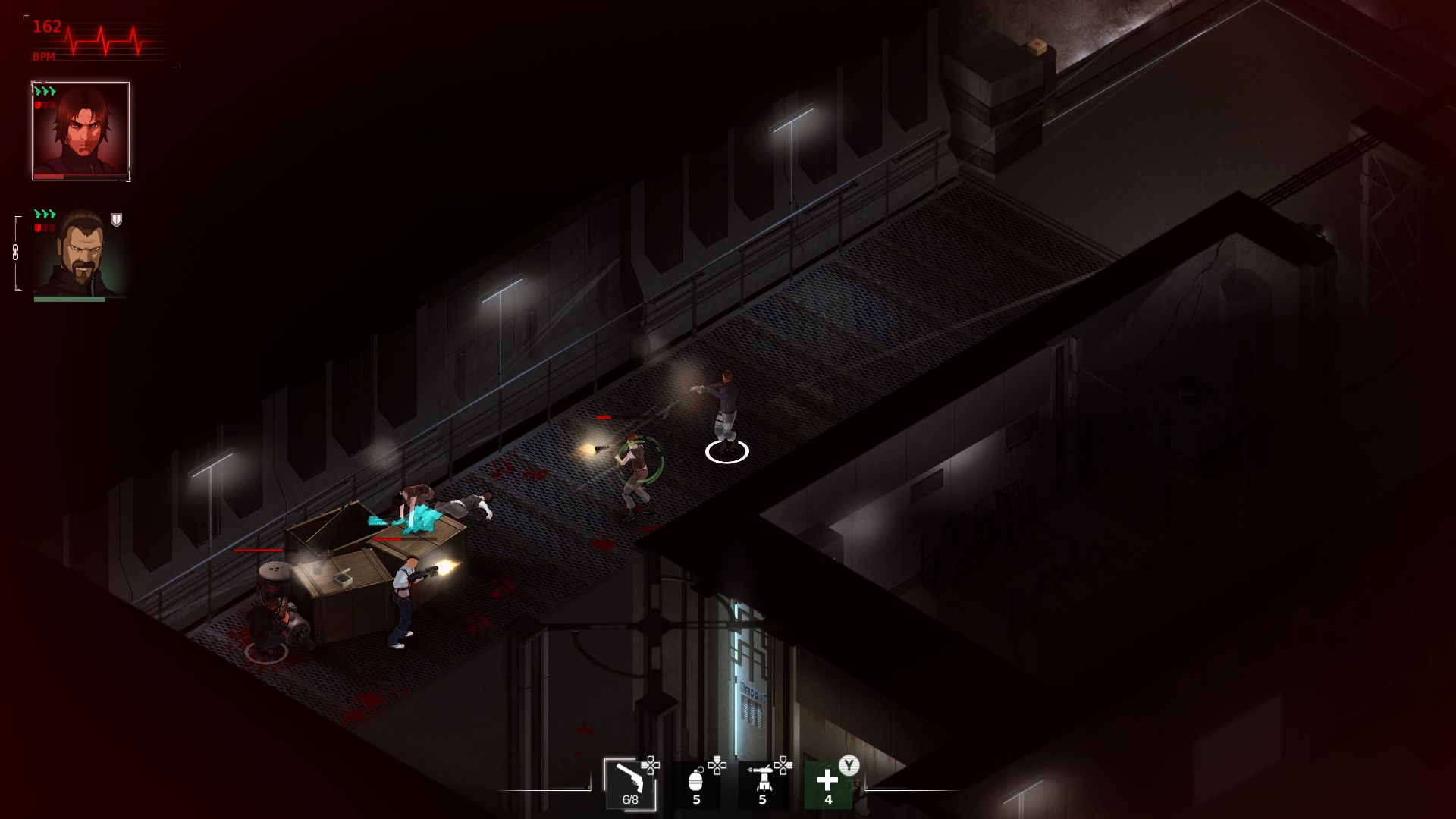 Unfortunately, Fear Effect Sedna is marred a bit by its combat at times, despite simple gunplay and easy ways to snap to nearby cover. For one, there are a few moments – mainly during boss battles – where the occasional cheap melee attacks hits you either by not being clear about exactly what happened or what hit you, or by having an attack hit you despite being just out of range. It also gets a bit predictable when enemies tend to somehow know to gang up on the character being controlled by the player, as opposed to spreading out a bit more and striking more naturally.

The other, more significant issue is that the game has automatic lock-on aiming, but while this isn’t too bad when confronting a few guards, it does make it a pain when the game botches what your priorities should be. The first real boss, for example, is a haunted exoskeleton that summoned ghosts during certain parts of the fight that could rush you and take out half your health in one hit, but die after one bullet. But despite wanting to clear them out first, the game kept sticking to the exoskeleton. Maybe I just missed the option to cycle between enemies (or it was just really tucked away), but it was still a pain now and then. But for a positive concerning the game’s combat, the fear meter this time around allowing you to deal more damage while taking more yourself the more it goes up is implemented quite nicely. 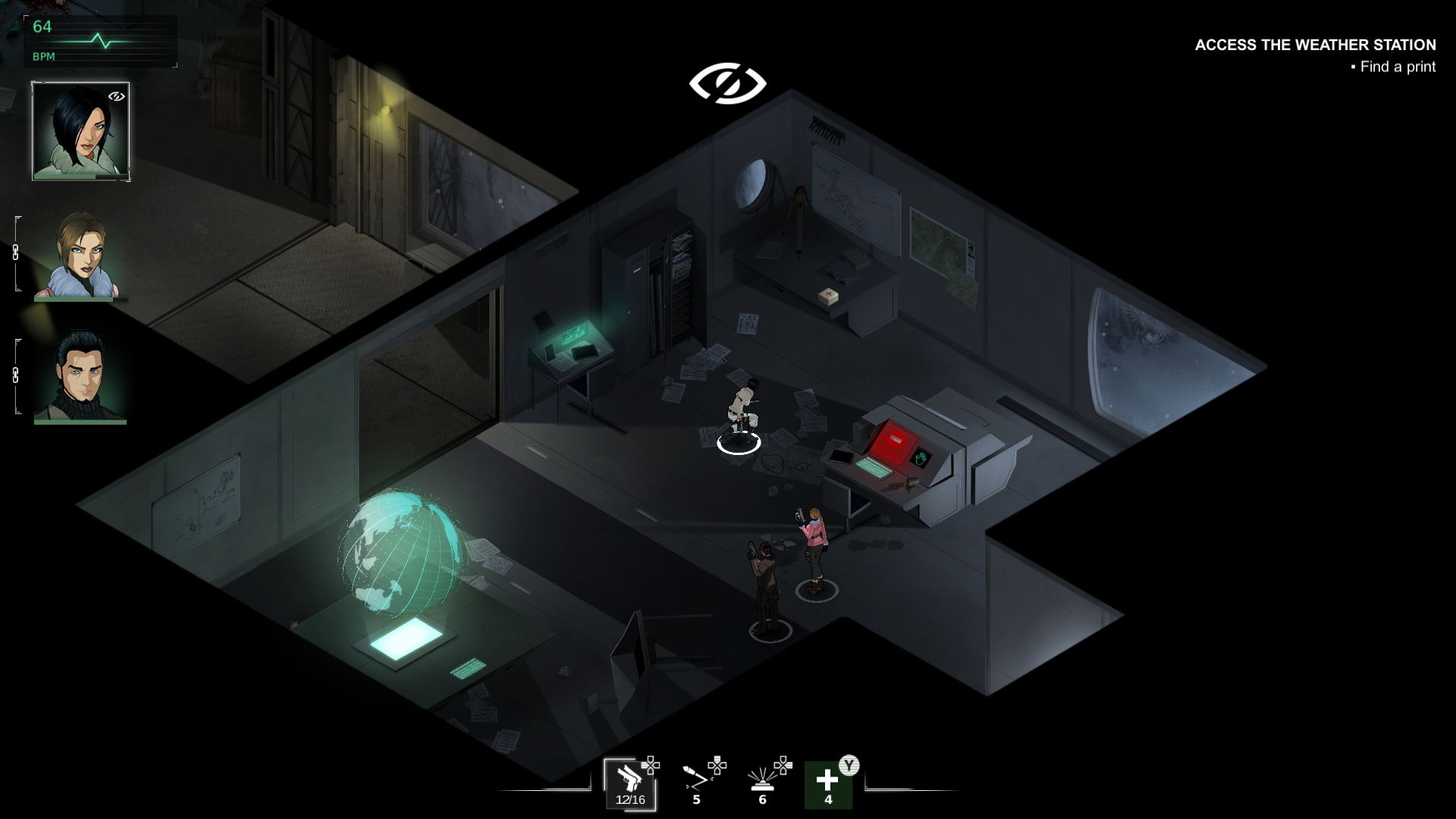 Another notable flaw in Fear Effect Sedna, though, is its handling of tactical gameplay. Because despite the aforementioned issues above, the combat is still mostly solid, but the strategy elements tend to feel unnecessary most of the time. There’s a “Tactical Mode” that allows you to plan a character’s movement, somewhat akin to Transistor, and each character’s skills can be used in a variety of ways, even allowing for combinations, but the issue is that most skirmishes with regular enemies tend to only last about thirty seconds to a minute (even with about three to four foes, depending on your squad’s current size), so you aren’t going to have much time to play with a lot of them.

Incidentally, controlling your squad is pretty basic, simply having a “Stay/Regroup” button alongside tactical mode. But you can’t have you teammates get into stealth mode with you, and the AI apparently isn’t smart enough to get out of the way of enemy views, leading to more than a few moments of frustration. The addition of these elements doesn’t really take much away from the game otherwise, but they just feel almost wedged in at times. It’s like the developers pitched the idea of an isometric action/stealth game, then figured it should have tactics gameplay because it was going to draw comparison to Syndicate and the like. And while experimenting with different genres or bits of genres is always welcome, the strategy here just doesn’t blend as well as one may think. 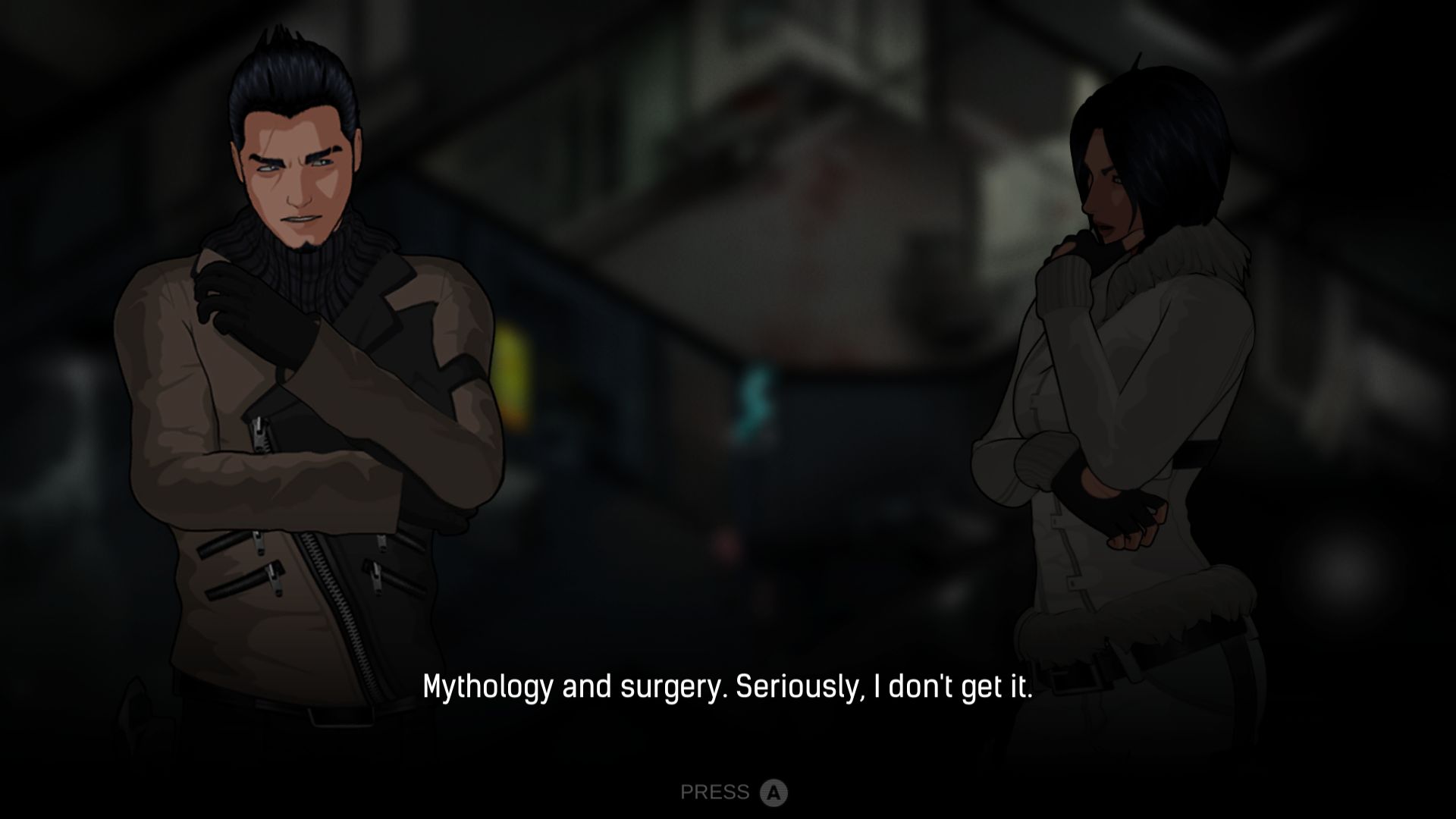 Fear Effect Sedna is a flawed return for the late PS1-era classic, with its combat occasionally being a bit clunky and not utilizing the tactical elements as well as it wanted to. But the creepy descent into Inuit horror, stylish graphics, and challenging puzzles and gameplay may still provide you with enough reasons to take a peek at it. And even with a few kinks to iron out, it still shows that there’s still a place for Hana and company in gaming today, regardless of the exact genre, so here’s hoping future journeys with them improve on things even further (and that the upcoming remake causes interest to continue spiking).