Thee award winning Fez has finally arrived on PlayStation at a steal of a price. This seemingly 8-bit former Xbox Live Arcade exclusive title features a true adventure where you’ll find the greatest mysteries on your own. Fez is not going to hold your hand around every corner and tell you what to do; it’s up to you to find out and discover what’s in this world and whether or not it’s worthy of understanding.

The story of Fez is pretty bizarre. You are someone of importance who inherits…well a Fez…that allows you to see the world though different means. The giant hexahedron cube that has given you these powers has exploded into 64 pieces and it’s your job to put the world back together again, Humpty Dumpty style. Traverse the varied vast lands in order to collect the many scattered cubes and shards to ultimately save the world. While not necessary a bad thing, the game is astonishingly easy. Maybe one of the easiest games I’ve ever played. The only real time you die is if you fall to your death or find yourself sinking into some ripple in time – a black hole, and even then there is no penalty as the game just places you a couple steps back. While it may not be much of a challenge, it also means it’s very much accessible for anyone to play. 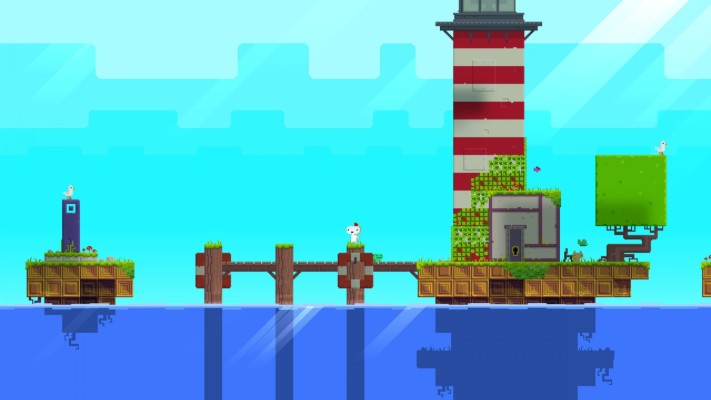 Although drawing inspiration from older Nintendo titles, such as The Legend of Zelda and Super Mario Bros., it’s difficult to deny Fez’s uniqueness with its incredibly abstract core mechanics. Fez is an adventure game that has a hefty open world to explore through interconnected doorways. Deceptive as it may be, it’s is not necessarily a two-dimensional game. You will be moving on a two-axis plane and everything looks like early 90s sprites, but it’s more of an illusion as the world itself is built in three-dimensions and you can manipulate it some wild ways. Your placement in the world is dynamic. Based on how you rotate the surroundings, you can find yourself in different locations you didn’t think you could get to. Expect to throw the laws of physics out the window with these intricate paradoxes.

Fez is not just some run of the mill 2D adventure platformer, though. It may look it on the outside, but there is so much more to this game than just running, jumping and alternating the different perspectives. Fez is surprisingly cryptic. It can easily be compared to something like Dark Souls in the sense that there is little to no information given to you about the world, but there is so much around the fiction. It’s up to you to find and decode pieces of this world through the smallest details. If played as a traditional platformer, you’ll miss out on what’s hidden right in front of you. The hardcore of fans will find and solve the most difficult puzzles through the most intense measures. When players are breaking out pen and paper to come up with solutions for the many different puzzles and translate a secret language, you know something was done right. This applies to the various hidden challenges scattered about, but playing through the game on your first attempt will be nothing more than a fun and persistent adventure.

With their success on Xbox Live Arcade and then accepting the PC community into their hearts, the independent developer Polytron has finally decided to release their baby on Sony’s platforms. Taking advantage of Sony’s Cross-buy support, Fez comes in at an incredible value, especially considering playing the game on the PlayStation Vita can look downright gorgeous thanks to the OLED screen. The PS4 version is no slouch either as the engrossing platformer runs at a gorgeous 1080p and at a smooth 60 frames per second. The touchpad on the controller will also bring up the map if pressed and change perspectives when swiping your finger across it. If for some reason you don’t have the PC rig to run Fez, which would be shocking considering how minimal the requirements are, then the PS4 version is definitely the one to get. It’s the complete package and, as far as I’ve encounter, doesn’t have any game-breaking bugs or crashes. 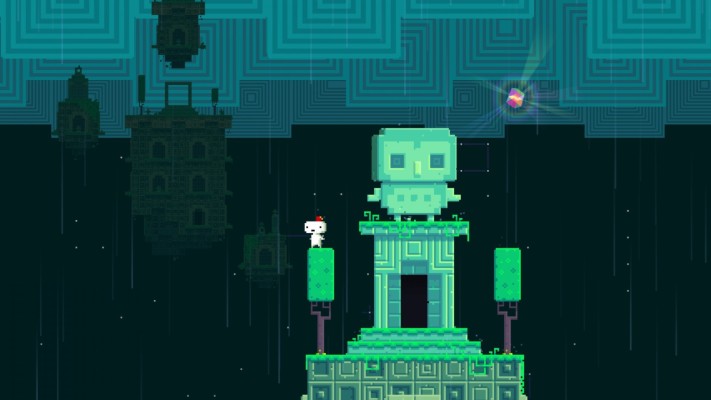 Over the course of two years, Fez has somehow been able to break out of its Xbox Live Arcade confines, re-releasing on PC and now Sony’s platforms. As it remains, this is still one of the most charming, charismatic adventures you will have, leaving those who experience it with a smile across their face for the duration of their play. Throw in its incredibly cryptic and deceivingly vague world, and you have a game that’s far more than skin deep.