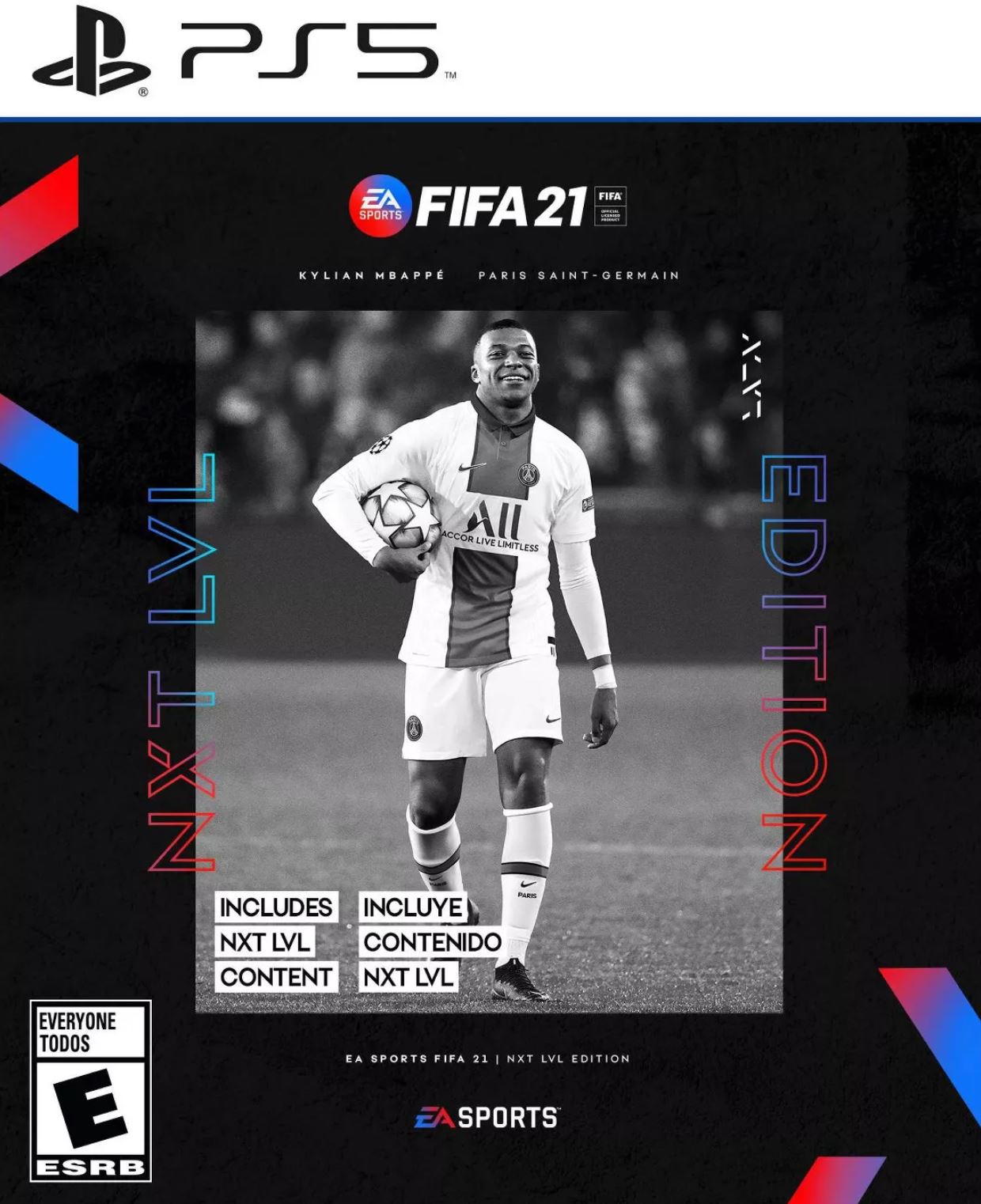 The world of soccer, or football, doesn’t have as many changes from year to year like other sports do. The FIFA franchise, while having a lot of tech, has been lacking in recent years. EA tried to change things up last year with introducing VOLTA to counteract losing league licenses to competition. Traditional modes started to dissipate with a focus on VOLTA and even the cinematic career mode was removed. FIFA 21 still has the streamlined game mode options, but a lot of attention to detail went towards offering a deeper gameplay experience. The result is still a fun soccer experience that’s aimed at the American market but doesn’t justify a yearly purchase.

VOLTA is basically a custom narrative experience that mimics street soccer and offers various player matchups that allow you to unlock more clothing and players. Some of the players are just random players involved with the narrative while others are FIFA stars. You create a player and upgrade them along with your squad. The action is fast-paced and feels like a combination of basketball and hockey in action. You can complete challenges that will unlock more skills and the mode is a lot of fun. It seems that it does, in fact, deter from the lack of traditional soccer modes in the game. The narrative isn’t that great, but the focus is the gameplay and it’s fun.

For this year on VOLTA, there were only a few slight changes implemented. You are able to jump in and out of games with up to three friends for 5v5 matches. The pacing of the mode has been changed to allow for more opportunities for scoring and this seems to help make the mode fun. Keeping the ball in front of you on defense is key as you keep an eye out to see which of your teammates break free for a scoring opportunity. Featured Battles were added for a new way to earn rewards as you continue to build your squad. This mode feels like it was made for younger players or casual soccer fans that aren’t familiar with all the possible leagues in the world. It’s a fun mode, but judging from the upgrades, it may not be a huge upgrade from what was initially introduced. 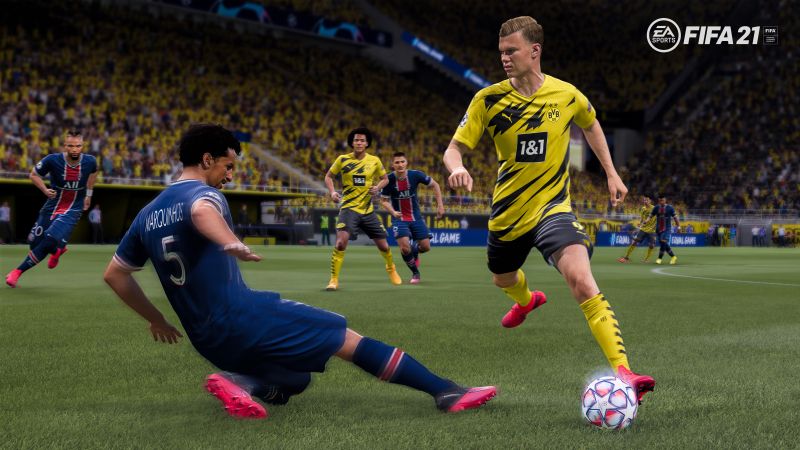 1-on-1 battles shine in the FIFA series and this was even adjusted in the VOLTA mode. The situations that develop across matches make you wish that real-world soccer would have more matches like FIFA offer. Even the initial play-in game when loading for the first time, the game was back and forth and forced extra time in the championship with an end of regulation goal that eventually went all the way through a shoot out which came down to the final shot. It’s moments and matches like this that make FIFA so fun. A lot of this is attributed to the smaller 1-on-1 player matchups on the field.

EA has added more tools for these 1-on-1 battles on the fields to make things more exciting and open up the potential for moving the ball down the field. Agile Dribbling is tied to the RT/RB buttons and coincide with movement to allow players to better retain the ball and not risk getting the ball stolen. This also allows for better control in 1-on-1 situations. Players can use new skill moves like a bridge dribble to get by the defense. The right stick still allows for skill moves, as well, along with using the new Creative Runs system. A simple flick of the stick can help guide teammates on breaks and can gain full control going into the pass. There are a good bit of simpler tools here that make the action even better.

EA has also stated they have upped the AI with the new Position Personality. This is supposed to allow the AI to get a better grasp of space and time with its surroundings. The AI should anticipate plays better and attempt to take advantage of certain situations. This may be the case at higher difficulty levels, but a good bit of the goals I scored was based on an attacker breaking loose in stride due to a fault in the AI. Player ratings are a thing, and it’s not like there are ten goals scored a game, but working the ball around the field did feel that the defensive AI would pick up on tendencies better, but you did your best to find the attacker breaking out. One issue with this were a lot of close offsides calls, and you would think with the better awareness, the AI would adjust to this. 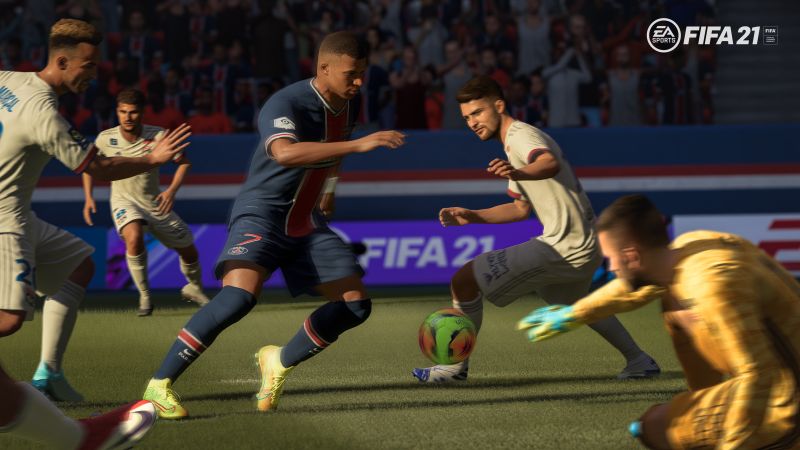 While the story mode is gone from FIFA 21, there’s a Career Mode where you can play as either a manager or a player. The option to simulate games and jump into situations is there, but basically you just jump in to a team you choose to play with. The Interactive Match Sim allows the player to have more control over the flow of a game. Changes can be made to the game while it’s simulating to turn the outcome in your favor. Managers can develop players into specific player types to fill out a team, while players will have a new feedback system to better get an idea for how the players will play in a game. Active Training and Match Sharpness have also been added for a deeper tool to further gain an advantage in a game. Players can expect the AI to do their homework, as well, with enhanced AI to properly prepare for the matchups. There are a lot of small tools here that seems to favor choosing the managerial career over the player.

Like the other sports games, FIFA Ultimate Team returns with new ways to stay engaged and earn rewards. There’s a new co-op mode this year that lets you jump in with friends. A FUT Stadium has been included that takes the best from multiple stadiums and incorporates it into one. Live FUT Friendlies (and the offline Friendlies) still allow for setting custom situations, rules and requirements to mix things up a bit. Lastly, FUT Events will be themed FUT matches that equate to unlocking more rewards. This is still a card mode that becomes the endless grind behind a paywall. 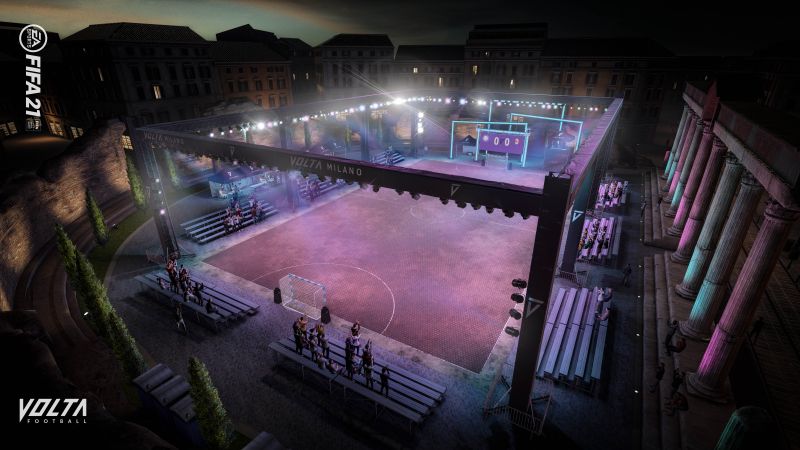 With the licenses continuously being removed involving other leagues around the world, FIFA 21 still retains two of the bigger leagues in the world that the USA cares about. Major League Soccer is here with all the teams and so is the Premiere League and UEFA Champions League. There are 700+ teams total that include Women’s National teams. The game just lacks some of the biggest names in Soccer, but does account for what American television shows and what more casual fans see.

FIFA continues to be EA Sport’s best-looking product. The details of players faces and their animations are some of the best in sports games and can only provide excitement for what’s to come next generation. FIFA 21 will offer the free upgrade to next-gen consoles in the same family. EA has also added a new collision engine that completely negates the detection issues of the past. Seeing the game in motion remains smooth and everything looks and feels natural on the field.

The sound no doubt still has the advantage over the competition when it comes to crowd noise. The chants and synchronicity of the crowd bring you into the action. When you have that player who breaks loose with the ball and the flow of the crowd noise increases, there’s nothing else like it in sports games. The announcers can still be a bit repetitive, but their tones help perfectly replicate what’s seen on television and the entire audio aspect just sucks you into the brilliant atmosphere of a soccer match. 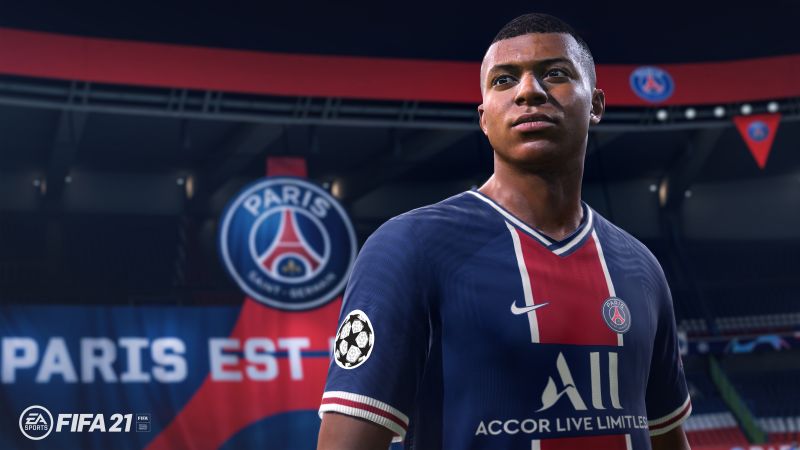 FIFA 21 has thrown a lot of adjustments under the hood to help give players more tools than ever before. A lot of the casual players, however, may not take advantage of this. Something needs to be updated to the shooting model and not just the 1-on-1 matchups. The feeling of a soccer match is still fantastic, but it seems EA has put this in the back seat in favor of VOLTA. Even though the Career Mode offers a good bit of options and control, the focus still feels like it is on VOLTA and FUT in terms of game modes even though neither mode changed much. FIFA 21 is a great soccer experience for those who don’t play these types of games often, but the limited mode selection and the overall feel of the game will leave a lot to be desired for yearly fans.