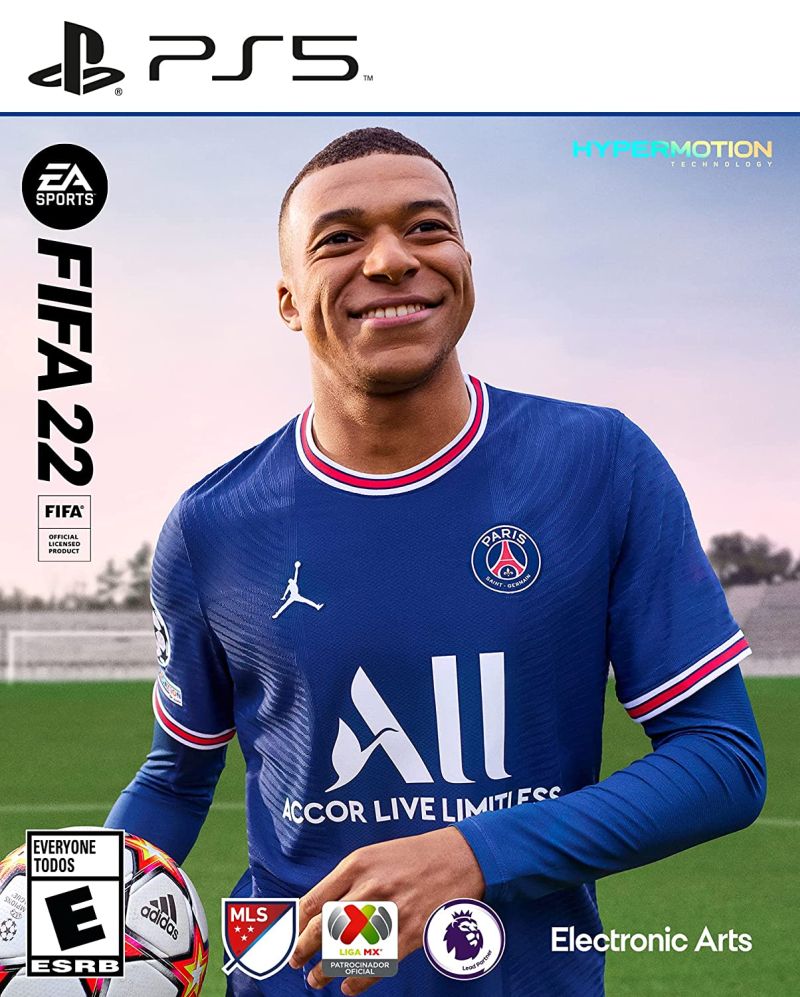 When FIFA made its initial jump over to the current generation last year, it felt underwhelming. There were improved visuals and the inclusion of Haptic Feedback via the DualSense Controller, but that was only for PlayStation 5. The team has had ample time to work towards making FIFA 22 the real game changer for this generation, and they’ve been busy. FIFA 22 has basically been rebuilt from the ground up with implementing Hypermotion Technology that features 11 v 11 motion capture animations, making FIFA 22 one of the best yet in the series.

There are a plethora of refreshes for many of the modes this year, even if the menu remains familiar on initial boot. The gameplay is truly where the game shines best. When first starting the game, you’ll be guided through a narrative tutorial where you will also create your avatar that will be used for the various modes. Once you are done with this narrative tutorial, there are no more narratives in VOLTA or Career Mode, so you can focus on playing the game. The Career Mode is the most overhauled with the ability to start as either a manager or a player. If choosing the managerial path in the Career Mode, this comes with the ability to create a team. Yes, you can create a team along with a stadium and stadium layouts, uniforms and crests. You can set the skill of the team, the type of team, and whether or not you prefer a youth movement or veterans. The team can replace any team in any league. The only issue I have with this is the generic players it gives you, rather than maybe letting you set out and get your own.

Once the season begins, you can set out in a preseason tournament depending on the league you are in. Carrying the Career will be the in-between game activities you have your team doing. You can have them either rest or recover, or take part in real training exercises that are fun to play. The mini games throughout all of FIFA 22 are a joy to play. You’ll need to balance team fatigue and also make sure their morale is up to par to play. All of these effects can be felt in the next game and could leave your team in the dust if not fully prepared. You will also be able to hire scouts for different regions and go out and check out the transfer protocol. The goal is to improve your team to be a contender in the league you play in. There are also expanded stories in the Managerial Career that’ll showcase more milestones and what’s going on in the football world. These achievements will also be documented prior to a match along with new cinematics leading up to the match. Overall, the Managerial Career is one of the best modes FIFA has ever seen as it offers something new and in-depth. 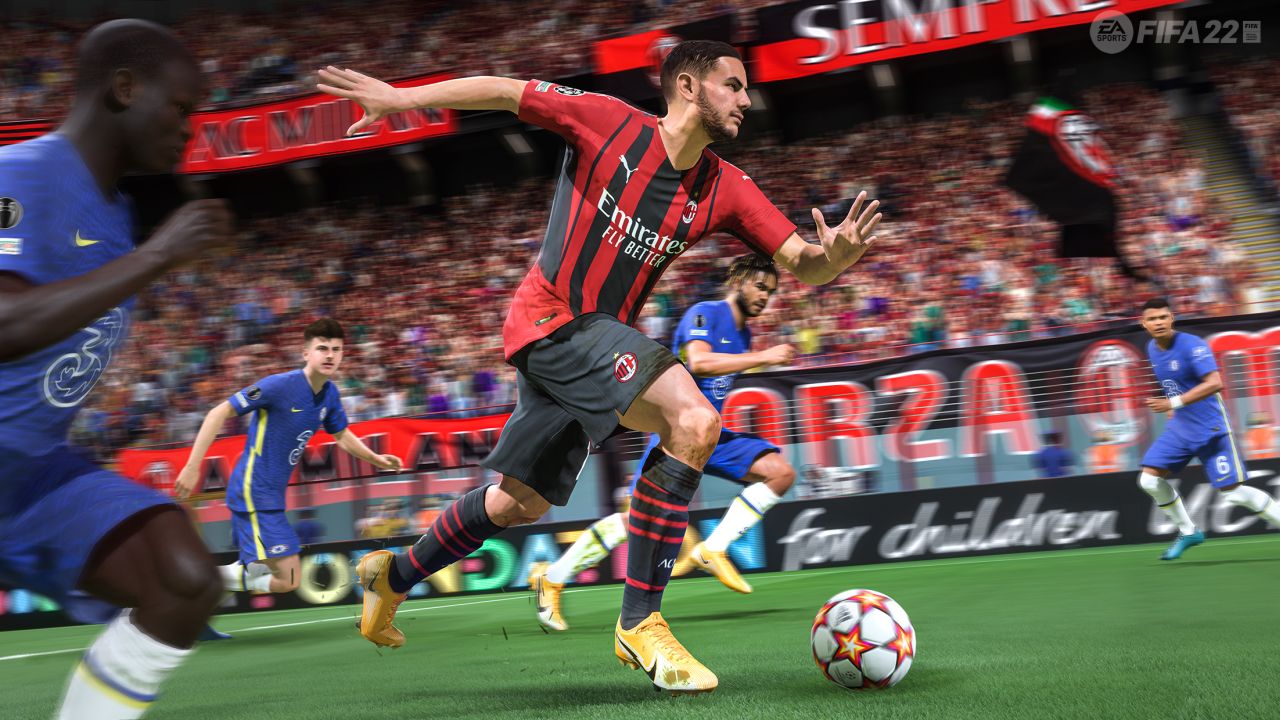 The Player Career will allow you to start as a bench player and work your way up the roster. This is more of the traditional Career Mode with a focus on grinding your player to become a superstar. You will initially come off the bench as a sub and work through minimal game experience and completing practice exercises to earn XP to start getting your rating better. There are match objectives that need to be met so that you can maximize your growth potential. There’s also a skill tree as the team wants to make sure that the player growth is truly in your hands and each skill presents a noticeable difference. Along with upgrading attributes in the skill tree, Perks play another pivotal role for your player, and there’s a wide variety to choose from to select the type of player to build. Some of the perks even help bolster teammates such as chance creation, attacking support and defensive cover all will help the team. Goal keepers will also have perks to go along with boosting their chances. While this mode isn’t nearly as grindy as some other sports games, it’s genuinely beneficial because every stride you make presents noticeable results rather than just increasing a number on a rating.

VOLTA also got a makeover and it feels much more fun to play this year. The addition of VOLTA Arcade is a pleasant surprise and it feels like Mario Party with soccer. Games like Disco Ball or Foot Tennis with others online allows for hectic fun and thanks to the improved physics of FIFA 22, this was enjoyable. You can also hop back on to VOLTA Squads to take on AI teams. The only issue I had with VOLTA Squads in terms of doing the new 4 v 4 for online players was it would never fill out a full game. People would either quit or another team would not be found. The online connectivity in the other modes was perfectly fine rather it be playing the Seasons option of traditional football or doing the VOLTA Arcade. It seems FIFA and EA have these servers working well despite this issue. 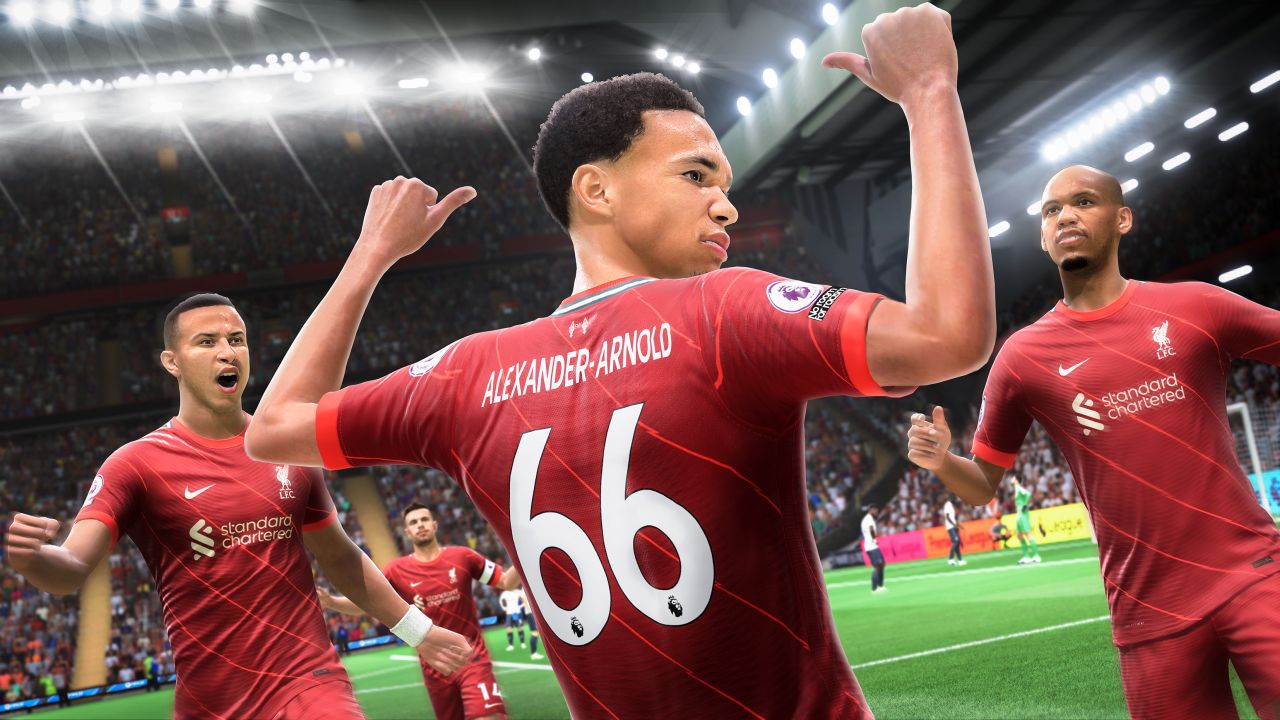 VOLTA also makes changes to how the mode works and plays. Improvements were made to defender logic so that special moves could be pulled off without being slowed down or knocked off the ball. Walls have also been made to be more forgiving for passes. Skill moves are simpler to pull off, as well, by using L1 or LB for one-on-one situations. The Skill Tree for your avatar in VOLTA has also been simplified but is more impactful. The team removed a lot of the nonsense categories from the previous year with each bonus now netting a +5 to +12 attribute boost. Two other modes, FUT and Pro Clubs, each see new and quicker ways to play. FUT offers Division Rivals to get players into games quicker as FUT Champions breaks off as more of a Seasons mode to keep players engaged in the card-based mode. Pro Clubs also introduce Womens Players this year as players have the option to drop in and out of games quicker. FUT Heroes also pays tribute to some of football greats of the past.

While these modes listed above help to redefine what FIFA 22 is, what drives the game is the gameplay itself. While VOLTA is more fast and arcade oriented, the traditional football side of things is where FIFA 22 hits it out of the park. Along with the HyperMotion Technology, the team at EA has implemented machine learning AI that can adapt to situations. Rather than having one motion capture per player in the field, EA has motion captured 11 on 11, which allows for more fluidity and realism and this is seen on the field. This also includes over 4,000 new animations that can be witnessed with amazing one-on-one interactions. Goalies have also been majorly improved and make some outstanding saves and never allow any weak goals. 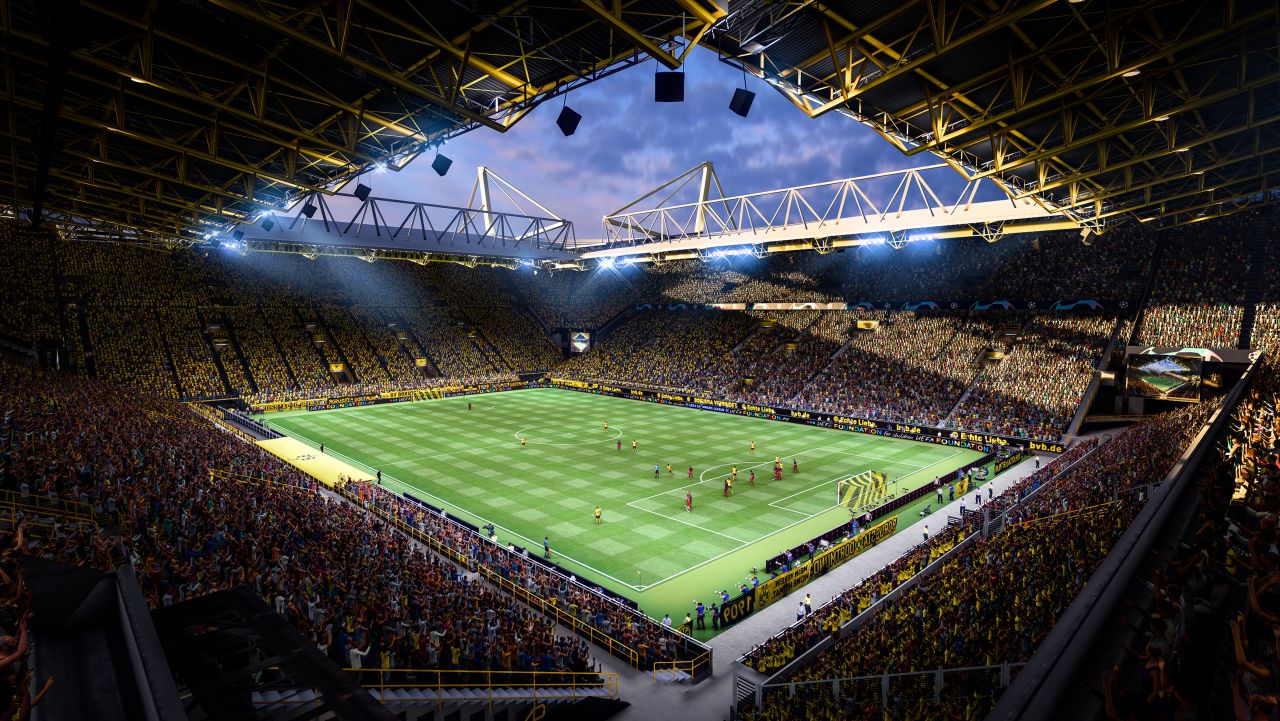 The gameplay is the best the series has ever seen. Ball physics have been retooled to better replicate what’s seen on television in terms of ball placement on deep kicks. Scoring goals isn’t as predicated on button timing and pressure as everything just feels so natural. Last year, a player would tend to break free on a run, but that gets eliminated much better this year. Of course, if you have a fast team against a slower team or fatigued team, it’s still bound to happen. Ball movement, passing, setting up, and pulling off maneuvers are satisfying. The haptic feedback seems to do a better job on the DualSense this year as well, with the triggers being more resistant. Vibrations will happen on replays, too, to help create energy which is a nice touch.

The visuals remain a strong suit for FIFA 22 with excellent player faces, player models, weather effects, stadiums and the entire environments. Messi’s hair still frolics in the breeze and the replays looks fantastic. The game runs at a buttery smooth 60 FPS from far away during gameplay and players still remain detailed enough at that far distance. The lighting during games, whether it be at night or during the day, is beautiful. There will be animations that you will most likely only ever see once and they’ll leave your jaw dropped. The audio remains excellent, as well, with the commentary team still sounding perfect for the game and the crowds bringing vibrant energy to matches. The soundtrack is also fitting for the game. 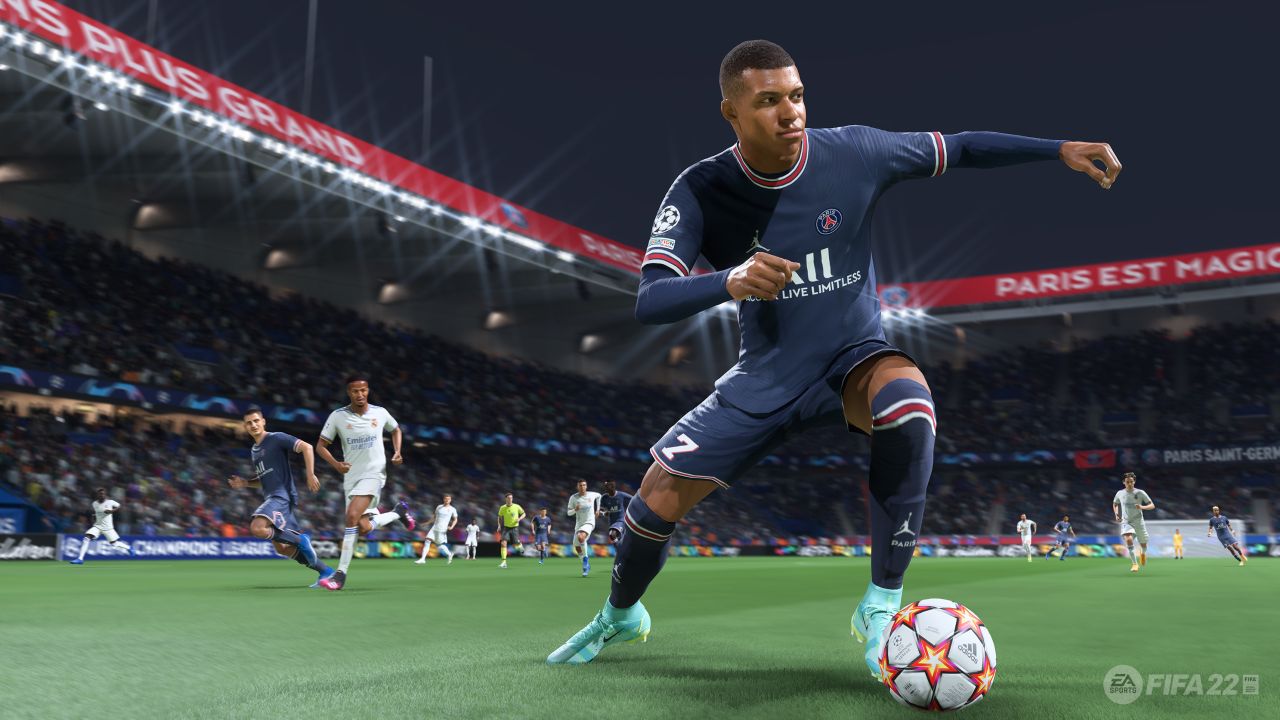 The team left no stone unturned for FIFA 22 and went all out in making a supremely-improved football game. The gameplay is the best the series has ever offered and makes the game fun no matter what mode you choose. The managerial career is the stand-out mode here with the ability to create a club and manage every aspect of the team. The player career offers a ton of meaningful upgrades that actually make you feel like you’re accomplishing something. VOLTA has been simplified but made more fun. But it all starts with the gameplay thanks to HyperMotion and the machine learning technology that brings excellent realism to FIFA 22. Even if you’re not a soccer/football fan, the controls of this game make it worth a try to at least play with friends. FIFA 22 may just be the best sports game of this generation so far.