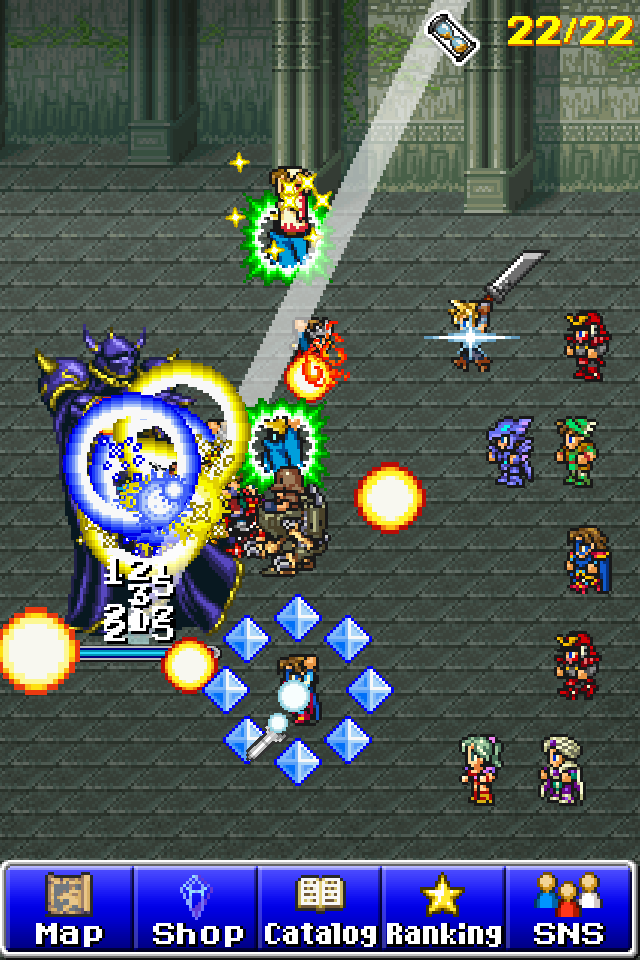 Somewhere along the way, Square Enix realized that companies were releasing fairly simple games on the iOS and making massive amounts of money off of them. Not content with their swimming pools full of cash, they decided they wanted to get in on the action and break into the iOS market. Making games is hard, however, so they decided to skip right to the second step and focus entirely on the making money aspect of it.  Thus, from this beautiful marriage of greed and laziness, a child was born, and Square Enix named it Final Fantasy: All the Bravest, because their original title of Final Fantasy: Hey Morons Give Us Your Money didn’t test well with focus groups. Even at the base price of $4, this game is an absolute waste of money. I’ve lost more cash than this and been more satisfied with how I used it, because at least I knew somewhere someone was buying something with it that wasn’t Final Fantasy: All the Bravest.

The story in this game is simple.  You play as a sucker who just wasted $4 and has made some awful decisions in his or her life.  Along the way, you’ll watch your cherished childhood memories shrivel up and beg for death as dead eyed husks of characters you once knew and loved watch you suffer and refuse to help you unless you pay them.  Sobbing and screaming can be heard in the distance, and you’ll eventually come to recognize it as your own just as you forget what happiness is and the darkness finally consumes you.

In all seriousness, there is no real plot in this game other than a brief preamble at the start and an equally unsatisfying couple of sentences at the conclusion.  Honestly though, the game itself is so bad that the only ending I would have satisfied with would have been an apology from Square Enix.  The game has you proceed through a linear chain of stages that alternate between battles against sets of generic enemies and some sort of boss creature, all of which have been culled from the iconic foes past Final Fantasy titles. Battles are supposed to be fast paced and hectic, and tapping on one of your characters prompts them to attack.  After, you wait for the bar above their held to fill and then you, uh, attack again.  And again.  You do this until your foe drops or you lose interest, and it is always a close race between those two outcomes.  Unfortunately, Final Fantasy heroes aren’t made out of the same stuff they were in the old days, as a single attack is enough to knock one out of battle.  You can’t really lose in this game, as even if your entire party is wiped out the worst case scenario is you have to wait for your party to revive itself at the frustratingly slow pace of three minutes per character.  Whatever you were battling is nice enough to stick around and wait if you don’t return to the world map, giving you this bizarre combination where battles have absolutely no difficulty but can still be annoyingly frustrating.

You start with a group of fourteen warriors and eventually expand your crew to 40 characters of up to 25 different classes.  Warriors, ninjas, black mages, and all your other favorite classes are here and it initially seems impressive when you find out you can control up to 40 of these characters for massive, quick paced battles.  However, they all do exactly the same thing and the only difference being characters is their attack animation.  Some characters do more damage then others, but this doesn’t even matter as your party is randomly assigned to you at the start of each battle. There isn’t even the smallest semblance to any strategy in the gameplay, and every battle just comes down to rubbing the screen as quickly as possible. There is a special fever mode where enemy can be attacked endlessly, but this basically just serves as a one use insta-kill against enemies that takes three hours to charge — a problem as boredom sinks in by end of the first area and the game doesn’t even have enough unique gameplay features to fill a half an hour. There are minimal RPG elements to it, as every now and then a new class of character is unlocked, another space is added to your party, or a weapon is found that will boost some characters’ attack stats, but you don’t actively do anything with any of these as everything is just upgraded and updated automatically.

It’s a mystery who the target audience is supposed to be for this game.  Hardcore RPG fans aren’t going to want to play something that is clearly designed for a casual audience, and casual gamers aren’t going to want to play this because it’s terrible and overpriced and they won’t be willing to pay extra for the Final Fantasy name that means nothing to them. Sure, the music is fantastic and the character sprites are fun to look at for long time fans of the series, but anyone with Google has access to either of those things for free.

The worst part is they hide all the “good” stuff away and only allow access to it for those willing to pay extra.  The game offers both “premium” characters and worlds in what must be the most egregious use of the word “premium” in recorded human history. Premium characters cost $1 each, and consist of many of the big names in the series, varying from Firion to Cloud to Snow.  You aren’t able to pick which one you want, and after you pay up you get one of the 35 possibilities chosen at random.  Each of the three premium worlds run $4, meaning it will cost over $50 to access all the content, which is enough to just go out and buy a real Final Fantasy game.

The fact that they hid a large portion of the game’s content behind the guise of microtransactions isn’t even the worst example of greed, as there are boss battles later in the game that are literally impossible to win the first time through. Regardless of how quickly you swipe and how much you swear, your party will be wiped out. No amount of level or weapon grinding will help and you are left with only a couple of options including waiting three hours for fever mode to build up for a “get out of boss fight free” card, waiting for your party to revive itself, but that takes a whopping three minutes per character (so you could be waiting for an hour and a half to completely restore your party, which is about an hour and twenty nine minutes past the point where you’ll stop caring), or using real life money to buy hourglasses to restore your party instantly and here we reach the core of their little scam.

This means that if you get to one of the mandatory impossible to win boss fights and want to continue playing immediately, the only way to do so is by paying Square Enix for that privilege. This isn’t even an example of a micro-transaction; this is extortion.  This is putting up a toll both and telling gamers they can either pay up or get lost.  This is the exact same nonsense that FarmVille and hundreds of other awful games use to milk people out of their money, but those games at least have the decency to offer a free base package.  Square Enix has put out a lazy, awful, abomination of a “game” and has the audacity to charge you extra if you want to keep on playing it.  I wouldn’t even recommend this if it was free, and charging people to keep playing All the Bravest is like charging people to keep on being tortured.

Final Fantasy: All the Bravest caters to a very specific audience: huge Final Fantasy fans with money to waste and a head injury that has remained untreated for an extended period of time. This is a game with only two gameplay features: tap the screen and give Square money. It’s true that the music is great and the nostalgia value is off the charts, but neither of these things justify a release that is little more than a blatant cash grab. This is less a game and more a trip to the nostalgia museum where all the cool exhibits cost extra to see. If you ever have the urge to buy this game, find a friend to play one of the classic Final Fantasy titles while you vigorously rub the screen to the point where it’s impossible to see what’s going on. You’ll have entirely the same experience, and save $4 that can be put towards something substantially more entertaining, like a pet rock or dental surgery.