That, in a nutshell, explains FFCC:MLAAK. As a young king, it’s your job to grow and manage a medieval kingdom. And as the above dialogue implies, kingship removes you from the battlefield entirely – instead keeping you safe and sound behind the walls of your realm. No hacking, no slashing – only city management. To be frank, I wasn’t exactly pleased with the new direction when I first heard about it. But sometimes, creating a great game means plunging your fingers into your ears and shouting “La-la-la” when fans raise a ruckus, and I’m happy to say that MLAAK is one such game.

MLAAK operates under the premise that, should you crave another world-spanning fantastical adventure, fraught with terms like “level up” and “Vegnagun,” you should just dig out one of the other umpteen-jillion Final Fantasy games. To a group of fans that loves nothing more than to plop down in front of a TV screen and adventure for hours at a time, this may not sound like such a great idea. But really, it’s what makes MLAAK great. The game is, in essence, a god game (see: Sim City, The Sims, Populous), but on a micro level. Instead of hovering over a map, eyes flying up and down endless menu screens, MLAAK sees you sprinting around town (seriously, kid can run) talking with villagers, magically constructing buildings, and being adored by the public. But that’s only the tip of the iceberg.

In order to grow your land from a puny collection of shacks into a bustling center of commerce, you must collect elementite, which fuels your magical “Architek” abilities. Unfortunately, town-sitting-on-an-elementite-well does not for an exciting game plot make, nor does it make sense. Elementite is found in outlying caves, which are also filled to the brim with monsters. 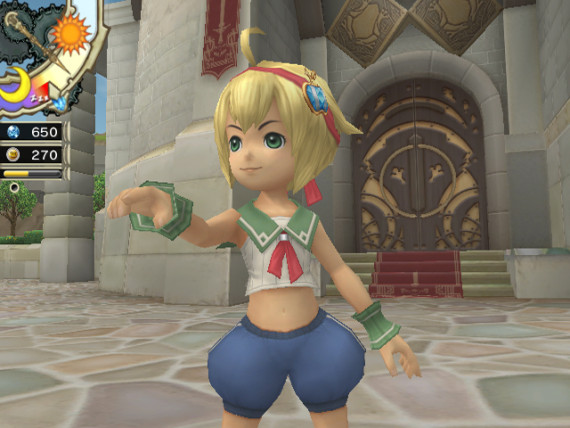 Since the king isn’t much of a scrapper, you’re tasked with commissioning adventurers to spelunk the caves for you. Adventurers have their own stats, can grow and become stronger, acquire weapons and armor, and even change job classes; in other words, they’re the characters you’d be playing as in any other Final Fantasy. Hell, they even fill you in on bits of the story they experience while out and about.

However, even though they aren’t “you,” there’s still a certain satisfaction to be had in building up a super-powered team of proxy fighters. Even better, city-building plays into the advancement of your adventurers. Certain buildings allow your tough-as-nails, yet cute-as-a-button team to buy new items, while others allow them to de-stress after a long day of monster-slaying.

Of course, such buildings aren’t adventurer-exclusive. Everyone can, say, pick up a loaf of bread at the bakery or take a stroll in the park — which plays into citizens’ morale. As a king, your loyal subjects’ happiness is priority number one, and depending on how well you achieve that goal, you’ll gain morale points. Morale, then, allows you to further expand your city, or simply help your citizens with interpersonal issues they’re facing.

Really, I could carry on like this for another three or four reviews. MLAAK isn’t bashful about its complexities, and explaining everything would be quite a task. Suffice it to say, for the most part, MLAAK does a great job of feeding its rulebook to you in digestible chunks. I was, however, confused once or twice, but you’ll likely find yourself confidently striding around town in no time.

In stark contrast to its varied gameplay concepts, MLAAK’s story sticks to the straight and narrow. Your father, king Epitav, abandoned his kingdom because of an evil miasma. It’s up to you to rebuild the kingdom, find out what happened to your father, and fend off evil in the process. As with the other Crystal Chronicles games, story loses its place in the limelight. Even so, you’ll enjoy the game’s lighthearted world and goofy, oddly trip-prone characters.

Sticking with that theme, MLAAK’s graphical style borders on diabetes-inducing. Everyone is short and cutesified, but it fits the game’s tone perfectly. On the technical side of things, the graphics look just as nice as any Gamecube game, and considering the space issues MLAAK’s developers had to deal with, that’s quite a feat. 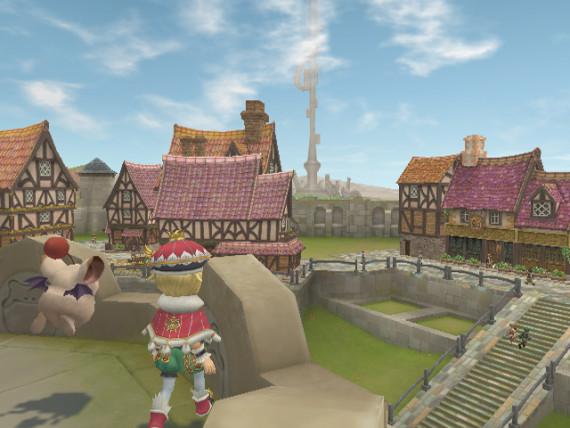 Really, purchasing MLAAK is a no-brainer. It’s as beautiful as it is deep, and will keep you glued to your television screen as the hours fly by. At 1500 Wii Points, you’re not getting what you paid for; you’re getting far more.